How to Make It on Craigslist

Editor’s note: The following guest post was written by Ryan Finlay who blogs at www.recraigslist.com.

The scrap yard’s electromagnetic steel excavator picked up my two steel die cast molds and put them on the scale. 1,240 pounds of steel! That meant $179.80 in my wallet for an hour of work. Not bad considering I picked them up on the free section of Craigslist.

I make my living on Craigslist. It’s the only business I’ve ever started that didn’t fail. 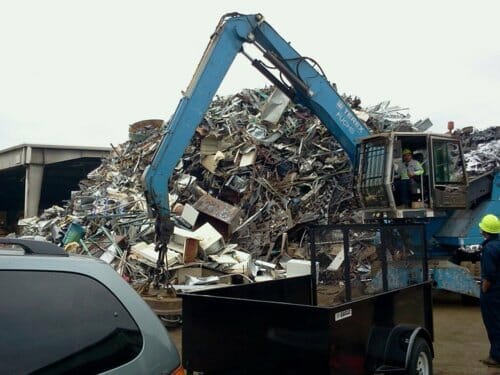 My trusty van and trailer delivering the scrap metal.

Just one year ago…

I was 29 years old, unemployed with four kids and a wife, with no money to my name. Some friends were kind enough to hook me up with occasional construction jobs, but the income wasn’t enough for a family of six to get by in Portland. How did I get to a place in my life where one unexpected bill would mean financial ruin for my family?

I love business, but everything I tried to this point was undermined by my own lack of discipline. I once started a CD repair business where I bought a high end machine that took scratches out of CDs, DVDs and video games. It made me some money, but not enough to keep me going. I started a website that sold mini remote-controlled helicopters but only sold one because no one came to the site. Starting a business has always been easy for me, seeing it through has been the problem.

Finally rock bottom and desperate, on Friday December 3rd 2010, I turned to my friends Chris and Jason. From that meeting, we figured out I had a knack for finding deals on Craigslist and that might be something I could make a living from. Most importantly, we decided I would email them every day with a complete record of what I bought and sold, and how much money I made so that I was accountable to see this project through. I started with $200 (money I earned from Jason) and I agreed to target a weekly profit of $500.

I spent about 60 hours that first week on my computer scouring Craigslist and driving around chasing anything I thought I could make a buck on. That first week I bought and sold: $720 in profit that first week. $12/hr, not too bad. I had actually created a business that was working!

I used to scan Craigslist postings early in the morning, especially when money was tight. I did what I had to do, even if the time wasn’t very productive.  Over this past year I’ve stopped fighting the slow times and have learned to relax, especially early in the day. On weekday mornings, I’ve noticed that it’s mainly businesses posting on Craigslist. So I workout, run, swim and spend time with my family. Late in the morning I begin searching the site more intently. 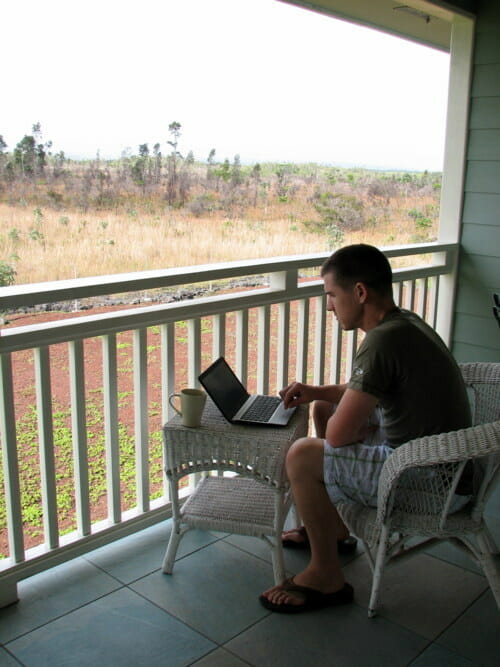 The author, ready to pounce on a deal.

I make the bulk of my income on appliances and the free section. I shoot for making between $75-$100 profit per item I buy and these are the best sections I’ve found for hitting that goal. When a good deal gets posted, I call immediately (or email if they don’t post a number).  99% of the time whoever contacts the seller first gets first crack at the item. If it’s a smoking deal, I get the address as soon as I can and I’m out the door.

Then I drive the items home, clean them up, take nice pictures of them (outside with no clutter around is best) and immediately re-post them at a price that will sell the item within a day or two. I also will deliver for a small fee and offer to haul away old appliances for free. Then I repeat the process. I rarely, if ever, drop the price on an item unless there is no interest and I’ve been sitting on the item for days. 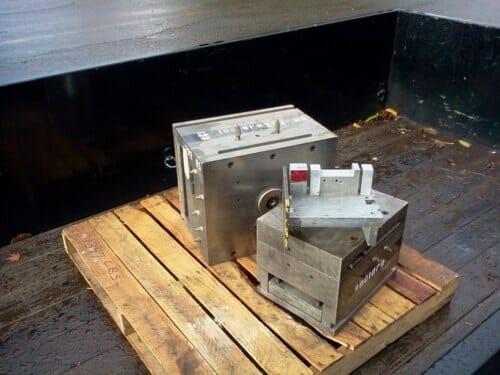 Buy what you know. Of the 600-plus items I’ve purchased, I’ve lost money twice. Once I called some kid about a pile of old baseball cards. I asked him what year they were and he told me they were 4 years older than they actually were. I looked them up and thought I was going to make some money. When I showed up and looked at the cards, I noticed they were newer than he had told me. I didn’t have my tablet computer at the time and couldn’t look them up, so I drove the price down and took a lesser risk.  Back at home I immediately found out the cards were worthless. I had paid the kid $100 for the cards, and eventually pestered him into taking the cards back and trading for an SD card and iPod nano. I still lost around $30 but learned a valuable lesson: don’t take risks on items you don’t know.

Know how Craigslist works. Whoever emails/calls first wins.  If it’s free, you need to pick up the item almost immediately. Good free items are spoken for within seconds. Depending on the city, there are hundreds of people sitting around trying to snag free items. Same for cars, electronics, computers, and other highly competitive sections. Good pictures are extremely important, as are clear descriptions. General sections are refreshed just under 10 minutes, sub-sections about every 15 minutes.

Value your time. Figure out how much you want to make each day and break your day into sections. Average profit for items I pick up ends up being $60-$70. I aim to pickup 3 items a day. I’m not worried how many I sell each day because everything eventually sells. When I arrive at someone’s house, I’ll ask if they are selling anything else or giving anything else away in case I can boost my profit per trip.

Buying advice. Ask lots of questions on the phone and be very specific. There’s nothing I hate more than showing up at someone’s place only to find out there is some deal-breaking problem I wasn’t told about. Negotiate over the phone/email or plan on paying full price. When I’m not paying close attention, I make mistakes. Profit is in the details.

Here’s what an actual week of work looked like this summer: 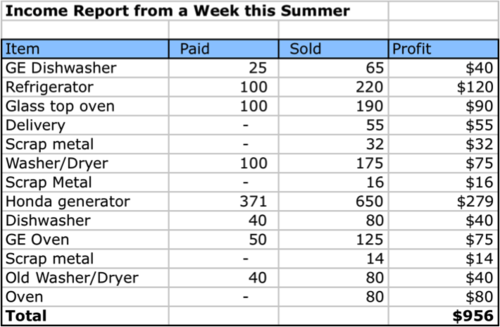 A year into the job I was able to find, purchase and sell these items in a 25 hour work week. By focusing on higher profit items and learning the trade over the year, I raised my hourly income from $12/hr to $38/hr.

My perspectives on the job after a year

Finally, I succeeded at sticking with a business. In addition to being able to support my family, this job has a flexible schedule and I really can do it anywhere there is a Craigslist. I can even work when I’m on vacation in places like Hawaii (where I am right now). I also love the thrill of the hunt!

On the flip side, the week before Christmas I only made $150. Income and hours can be inconsistent and you will come into contact with a lot of interesting people on Craigslist. The other time I lost money at this job, a lady passed counterfeit money to my wife for some tools I was selling.  I was out on another pickup at the time. So I lost about $170 that day. 1,200 transactions and only two were unpleasant. I generally set sale prices by trial and error, but now I can use the price guide on this site to make pricing more efficient. The job is getting easier.

I started the year with almost nothing and ended with a used van, a new utility trailer, less debt, fully paid bills and money left to take the family to Hawaii. I’m not sure where this whole thing will end up or what it will turn into. What I do know is that someone can make a very decent living buying and selling on Craigslist alone. I achieved this my first week on the job. After trying lots of things and failing, I feel like I finally made it.