How To Pay Your Taxes As A Drug Kingpin 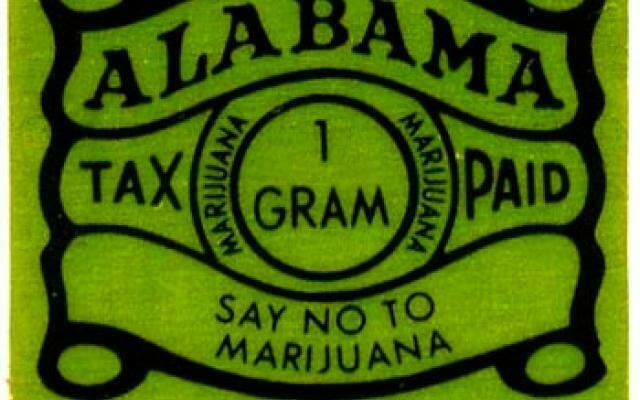 If your local drug dealer has ever wondered about his tax liability, Kansas’s Department of Revenue offers some helpful guidelines. The state has set its tax rate on marijuana at $3.50 per gram and its taxes on other controlled substances at $200 per gram or $2,000 per pill. Drug dealers operating in the state should visit the Taxpayer Assistance Center in Topeka between 8am and 4pm to buy drug tax stamps. Or they can order them through the mail. By attaching the stamps to the drugs, dealers can show that they paid taxes their taxes. They may be busted and arrested, but at least tax evasion won’t be one of the charges.

Kansas is not alone in demanding that drug dealers pay their fair share of taxes. Some ten to twenty states have (or once had) legislation setting tax rates on illegal drugs. The federal government once set taxes on weed under the Marijuana Tax Act of 1937, and the IRS still asks Americans to report income from bribes, drug dealing, and extortion.

Instructing drug dealers to line up in Topeka to buy drug stamps (or have them delivered to their homes) seem suspicious. The Kansas Department of Revenue does try to reassure dealers that they won’t be arrested as soon as they buy the stamps. Its website reads:

In order to protect against any possible violation of the self-incrimination constitutional protection, a dealer is not required to give his/her name or address when purchasing stamps and the Business Tax Bureau is prohibited from sharing any information relating to the purchase of drug tax stamps with law enforcement or anyone else.

It doesn’t exactly work. According to Attorney Robert Henak, “Everywhere but four states, I believe, there is no indication that drug dealers are buying stamps.” The majority of states have sold no stamps, or only a few thousand dollars worth in tiny increments.

So who is buying? Stamp collectors. Many of the stamps feature marijuana leaf designs or comical health warnings as Henak, a stamp collector who once shared his collection of drug tax stamps with Playboy Magazine, can attest.

When we contacted Criminal Defense Lawyer Bruce Margolin, who specializes in marijuana and drug cases, his response revealed the marginal role of drug tax stamps. After answering the phone with a cheery, “What can I do for you, Mr. Journalist?”, Margolin told us, “All I can tell you about is a case where my client won in federal court that it was a violation of his self-incrimination rights to require that he buy a stamp. I don’t know what states are doing to get around that.”

Margolin was referring to the 1969 case Leary v United States, in which he defended Timothy Leary, the Harvard psychologist who experimented with psychedelics and created the phrase “turn on, tune in, drop out” to “advertise the wonders of LSD.” An inspector had discovered marijuana in Leary’s car as he and his family crossed the border from Mexico into Texas. Margolin argued that if Leary declared the marijuana to pay taxes owed by the Marijuana Tax Law, he would have incriminated himself. The Supreme Court unanimously agreed that this violated his 5th Amendment rights against self-incrimination, and Congress repealed the law.

States began passing their own taxes on illegal drugs starting with Arizona in 1982. They aimed to circumvent the self-incrimination problem of the national marijuana tax through language — like that of Kansas’s policy described above — that protected buyers of drug stamps from being prosecuted for its purchase. The legal logic, according to Henak, is the precedent of Kastigar v. United States, which ruled that the government could compel someone pleading the fifth to testify if the government offered immunity.

Awareness of drug tax stamps is low. But even if the policy was well understood, drug dealers distrust of states selling these stamps would be well founded. In 1997, Henak argued a case which struck down Wisconsin’s drug tax stamp policy. The defense argued that the state did not provide full immunity as police used the fact that stamps were purchased to develop leads and start an investigation. The judge agreed.

That’s far from the only legal trouble drug tax stamps have endured.

In the few cases in which actual drug users bought drug tax stamps, they did so believing that it would legalize their use or distribution of illegal drugs. And not without reason — some members of the judicial system agree.

In the mid nineties, police discovered marijuana in the home of Peter Wilson, the chairman of the Arizona chapter of the National Organization for the Reform of Marijuana Laws. Wilson calmly pulled out a binder full of tax stamps. Satisfied, the police left. The next day, however, they reconsidered and arrested Wilson.

For over a year, Wilson’s case batted around the appeals process. To the horror of the Arizona legislature, a number of judges gave credence to his argument that his purchase of tax stamps and a “Cannabis and Controlled Substances Dealer’s License” made his possession perfectly legal. The courts ultimately cleared Wilson, arguing that the intent of the stamp law was punitive, which meant that charging Wilson for possession would amount to double jeopardy, or charging him twice for the same crime. His case led to a rush on tax stamps and the legislature repealed the law.

Arizona sold more stamps than most other states since its stamps, at $10 per ounce of weed in 1996, was relatively cheap. Most other states “taxed” illegal drugs at 100% of their street value, which suggests that they intended for the law to be an additional weapon against drug dealers rather than a serious attempt to tax the black market.

The majority of revenue brought in from tax stamps comes from the back-end, when law enforcement busts drug dealers, rather than at the front-end from actually selling stamps. The laws generally call for dealers to pay 100% of their unpaid taxes at interest rates of 10% or higher. The penalty often can’t be discharged in bankruptcy and law enforcement can seize assets.

This has allowed several states to bring in substantial revenue for its drug enforcement programs. North Carolina, for example, brought in over $8 million in a single year. But studies that looked at stamp laws during their heyday in the eighties and nineties found that the programs often failed to pay for themselves by bringing in revenue in the low tens of thousands of dollars or at best low hundreds of thousands.

Drug dealers were simply unable to pay. Prosecutors in Wisconsin, for example, used its stamp law to levy $33 million in unpaid taxes against dealers over a 5 year period. But the dealers could only pay one million. That collection rate of under 5% is typical.

America’s anti-drug laws are not exactly lenient. The penalties involved are a big reason why drug dealers assessed with back taxes cannot pay. Critics of the stamp laws contend that it would be much more logical to increase the fines for dealing drugs — rather than seemingly legitimizing them via taxation. Many others note that the punishments for dealing drugs are sufficient; it’s merely a matter of enforcing existing laws. Attorney Robert Henak described the motivation behind the stamp laws as legislatures’ desire to appear tough on crime.

Today drug tax stamps have fallen out of favor. Yet some revenue departments continue to offer stamps and collect back taxes from prosecuted dealers. In response to our inquiry, a public information officer at the Kansas Department of Revenue informed us that Kansas collected $1,280,399 through the program in 2013 (and that “many people buying the actual stamps are stamp collectors.”) But when New York’s then governor Eliot Spitzer proposed taxing illegal drugs in 2008, politicians derided it as the “crack-pot tax.” Back in 2000, a law article noted that prosecutors seem to avoid using stamp laws when prosecuting drug dealers because other laws are sufficient and the stamp laws are “a ripe ground for constitutional issues on appeal.”

As a defense attorney, Robert Henak’s clients are often called “those people.” Stamp laws seem like the misguided tough on crime efforts he describes as motivating his career — legislation that ignores whether people are properly convicted in the rush to get them locked up. As he quipped about his 1997 case that found Wisconsin’s stamp law unconstitutional, “It was a fun case, and one where there was no reasonable way to lose. So of course, it came out 4-3.”