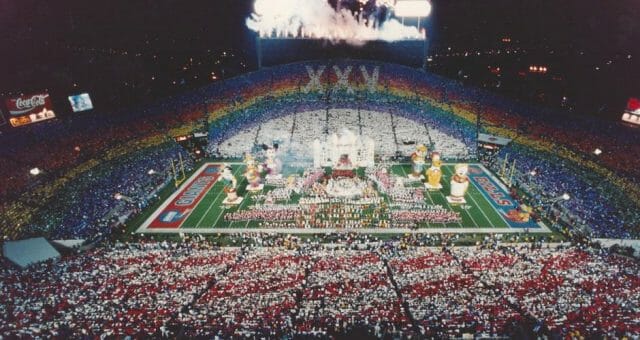 Card stunts are an American football tradition. In a card stunt, thousands of audience members raise squares of colored paper over their heads. Each of these pieces of paper is a pixel in a giant multi-coloured image. While it isn’t hard for any one individual to stand up at the right time, holding the right piece of paper, in order for a large stadium card stunt to work, tens of thousands of people need to coordinate together — have the right colored card, stand up at the right time. That leaves a lot of room for error, making card stunts major feats of design, human coordination and planning.

In 1991, when Disney got the contract to produce Super Bowl XXV’s halftime show, they had a whimsical vision. The New Kids on the Block were to perform a medley of their greatest boyband pop hits and dance routines, surrounded by 50-foot-inflatable Disney characters, and more than 3,500 local children dressed like the mannequins in the “It’s a Small World” ride. The backdrop would be a card stunt: tens of thousands of spectators, holding up colored pieces of paper, first to depict a ripling American flag, and then an arced rainbow labeled “XXV.”

They put a 26-year-old employee in charge of these stunts. Joe Kivett had never done anything like this before: no high school basketball games, or college football stadiums. Now he was responsible for the Super Bowl.

“I’ve been doing this for 24 years,” Kivett says. “And I have learned many, many things about how to get 70,000 people to do exactly what you want exactly when you want them to do it. It’s not an easy task.”

A Brief History of Card Stunts

The first card stunts weren’t technically card stunts. They were “fabric” stunts. The first stunt of this kind was at the 1904 Stanford versus Cal game. A Stanford graduate student named Thomas Jewell and a yell leader named Merle Thorpe arranged for strategically-placed spectators to be equipped with two pieces of white muslin. At the yell leader’s signal, each fan threw the muslin over their shoulders and their hat, comprising a giant white “S” for Stanford.

In 1908, both Cal and Stanford innovated their stunt technology with reversible hats. And Cal claims to perform the same stunt with cards of colored paper, thus creating proper card stunts in 1910. Though it might seem like a trivial switch, as Computer Scientist Larry Tessler has pointed out, “A stack of foot-square cards offered two advantages over a hat: more surface area and a more extensive color palette.” UCSC appears to have performed the first animated card stunts in 1922. 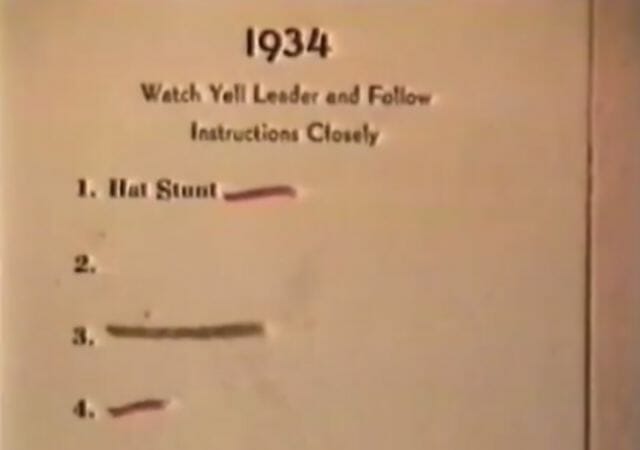 As the tradition developed, schools developed a system for coordinating the stunts. Volunteers left stacks of colored paper on each seat of the card stunt section of a stadium, along with a sheet of instructions telling each person which card they were supposed to hold up for which stunt. Because each set of instructions could be unique to each stadium seat, students filled them out by hand. 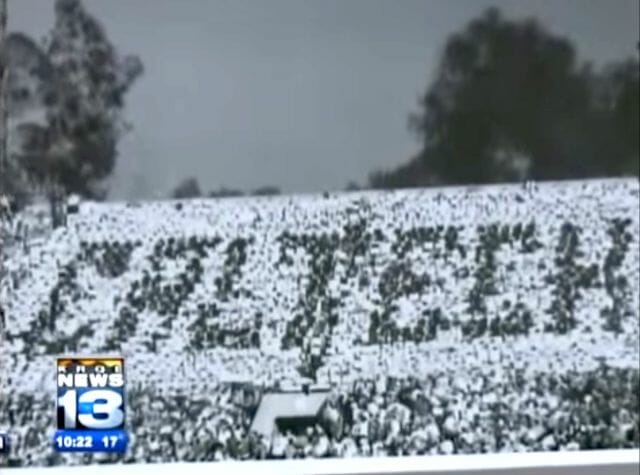 In 1961, the “greatest college prank of all time,” was carried out in the form of a card stunt. At halftime at the Rose Bowl, thousands of audience members held up cards spelling out “CALTECH” in big block letters. The problem was, the students holding up the cards were not Caltech fans: Caltech wasn’t even competing in the Rose Bowl. A few mischievous Caltech students had stolen an instruction sheet, made thousands of copies, filled each out by hand with subversive new instructions. Then they smuggled the prank sheets into the card bundles. 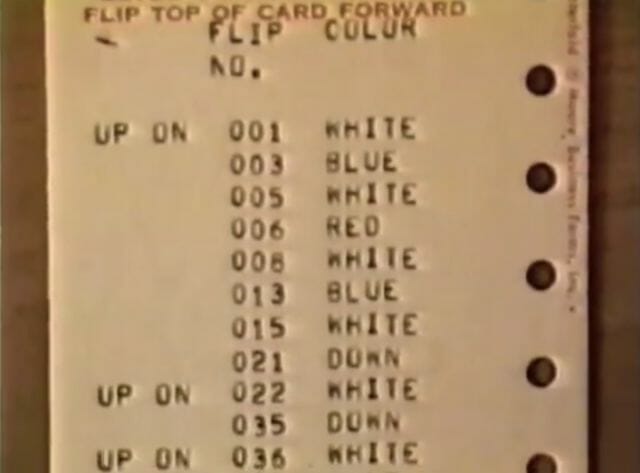 Also in 1961, up the coast from the Rose Bowl, two Stanford students — Larry Bread and Earl Bobert — wrote a program to digitally draw card stunt animations, and print out the instruction cards automatically. It was one of the first raster-based animation systems in the world. University of Iowa at Kinnick Stadium

The secret to carrying off a card stunt, Joe Kivett says, is that audience members want to participate: “People love to be part of the show. Whether you’re a 5 year old kid or an 85 year old man, people participate.”

“We try and document everything we do,” Kivett says. “You can zoom in on photos, and count how many people are participating. We did the Academy of Country Music Awards about 5 years ago. There were all these celebrities in the lower levels of the stadium, and we had 5,000 cards total.Every single person participated.”

The key is to make it bone simple for them to do so, and that comes down to having a good team, and planning things out very, very carefully. 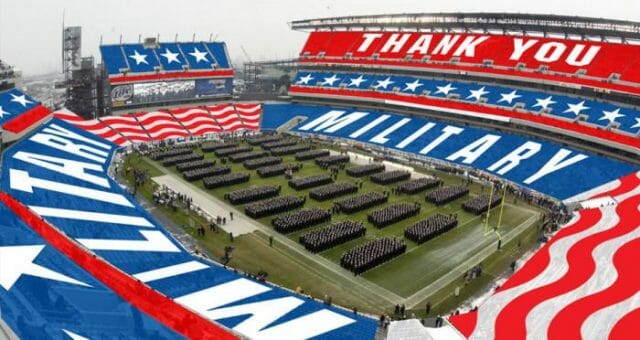 Phase one of producing a new stunt, Kivett says, is design. Technology plays a much bigger role in the process than it did back in the old days. First, he has an AutoCAD designer make a 3D model of the stadium out of the seating diagram, seating manifest, and wide-angle photos of the stadium. Then his graphic designers and the client to come up with the images in the stunt, and maps them onto the 3D model. This is how he makes sure he’s happy with the way the design will look from every angle.

From this Kivett can determine how many cards of every color he needs to order from the printers. Then he’s ready to move on to phase two: printing, sorting, and boxing.

The cards are printed with simple instructions on the uncolored side: “Stunt number 1, hold this card with this side facing you.” Because he often produces stadium-wide card stunts, Kivett’s cards are die-cut with a little window, so the holder can look through the card at the other side of the stadium. Then they’re shrinkwrapped, which keeps them in good condition and prevents tampering. From there, the cards are sorted into “row bundles” based on which seat they’re supposed to be in. 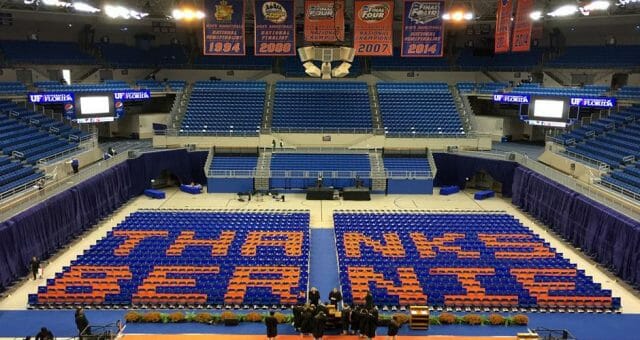 Cards taped to their intended seats in an empty stadium; University of Florida graduation

Phase three is shipping and execution. Those bundles are packed into boxes and shipped to the stadium. Kivet sends a team of 1-4 managers to the venue, and hires a group of people to tape cards to their intended seats — for a full stadium this takes about 60 people a full two days.

Then Kivett’s team writes P.A. announcements, both to cue the stunt itself, and to warn the audience early-on what’s going on: “Ladies and gentlemen, we’re going to create two card stunts today. Please read the instructions printed on the cards.” In addition to this, Kivett has cue card holders stand at the bottom of each section, with radio headsets. At his command, they raise their cue cards, which say things like, “Get Ready for Card Stunt,” “Go Card Stunt,” or “Cards Down.”

Kinnick (leftmost) and his team posing with their cue cards in Mexico. (‘Mosaico’ is Spanish for ‘card stunt’)

After working for Disney, Kivett managed sports and entertainment licensing for Tervis, a drinkware manufacturer, for years. He continued to produce card stunts on the side. When his wife got pregnant, just a few years ago, he decided to start his own stadium entertainment business: Kivett Productions. He’s expanded to about 30 card stunts a year. To have Kivett produce a traditional card stunt in your stadium costs about $1-$3 per seat. The higher the number of seats, the lower the price per seat. A card stunt that covers a 70,000 seat stadium costs in the ballpark of $70,000.

Each stunt is a massive collaborative project, but Kivett Productions only has one full-time employee. His business is so seasonal that everyone else he hires is on short-term on contract. “February through May are usually my off season,” he says, “but April and May have actually been rather busy this year.”

Part of the reason for this is he’s taken his business international — to countries that have a strong tradition of spectator sports, but have never seen or done a card stunt. He’s done stunts in Mexico, Canada, Columbia, Australia. Just last week he produced a card stunt at a UAE soccer match in Dubai.

A stadium in Guadalajara

“It’s kind of like being an explorer,” Kivett told us, “taking this new form of entertainment to these foreign countries. I have never seen a crowd go so wild for a card stunt as they did in the Bahamas.”

One of his proudest stunts, however, was a stunt for the University of Iowa in 2011. “That got the most publicity of anything we’ve ever done,” Kivett said. “There were lots of articles asking, ‘Why are we doing this?’ and ‘Hawkeye fans aren’t the card stunt type of people,’ and generally wondering whether this was going to work.”

“They’re probably the two best-looking card stunts I’ve ever done,” Kivett said. “And it was all the sweeter because I’ve got the videos and photographs to prove the naysayers wrong.”