How We Execute Prisoners

In the United States, all but 18 states retain the option to sentence prisoners to death. But the United States has performed fewer and fewer executions in the past 80 years. Capital punishment was briefly suspended in the 1970s, which is why no executions took place from 1972 to 1976.

While declining public support can partially explain this trend, another factor to look at is the methods we have used to execute prisoners: 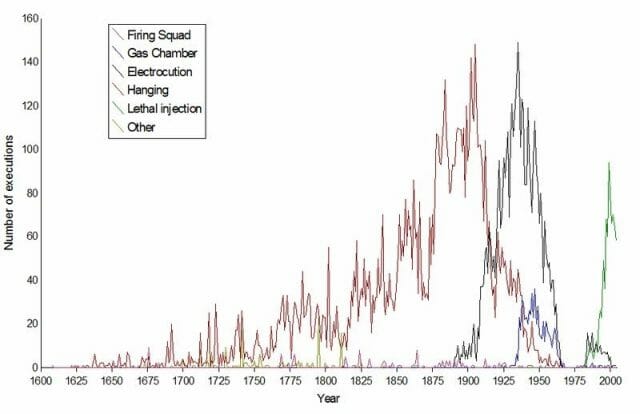 Capital punishment in America has been driven by the boom and bust of hanging, electrocution, and lethal injection. Hanging and the electric chair each have been largely replaced by the lethal injection due to the “cruel and unusual punishment” clause in the Constitution. Stories of hanged and electrocuted prisoners who survived their execution led to public outrage. One of the most famous cases occurred in 1945, when a poorly set-up electric chair didn’t kill inmate Willie Francis, who screamed “Take it off! Take it off! Let me breathe!”

The search for more “humane” executions led to the introduction of lethal injections in 1980. This method (frequently involving a three-drug cocktail) purportedly caused less pain and led to death within just a few minutes. Many states that still sentence prisoners to death exclusively use lethal injections. More than 85% of all executions since 1976 have been via lethal injection.

But the dwindling availability and increasing costs of lethal drugs have led to delays in executing prisoners still on death row. Several manufacturers recently closed up production because the European factories that made them were found in violation of domestic laws. Almost every European country has abolished the death penalty, and laws often forbid the production of drugs which may end up being used for executions.

As states struggle to find suitable alternatives, what used to cost $168.03 per prisoner now costs upward of $1,000. And “failed, agonizing” experimentation with new lethal drugs have raised more concerns about the need for a more “humane” method.

Despite the impact of critical public opinion on execution numbers and methods, however, the United States remains among the top executioners in the world: