Is therapy the key to curbing crime? (Photo: Keith Allison)

How much crime takes place simply because the criminal makes an impulsive, very bad decision? One employee at a juvenile detention center in Illinois estimates the overwhelming percentage of crime takes place because of an impulse versus conscious decision to embark on criminal activity:

“20 percent of our residents are criminals, they just need to be locked up. But the other 80 percent, I always tell them – if I could give them back just ten minutes of their lives, most of them wouldn’t be here.”

Whatever the actual number, an awful lot of crime happens because of someone losing their temper, or acting out of fear or panic. It seems that if you wanted to reduce crime rates, you’d want to impact the impulse to commit a crime and eliminate those “ten minutes” that ruin both the victims and criminal’s lives. But how would you do that?

There’s pretty strong evidence that just punishment does not work. One simple example: in the US, when you turn 18 you suddenly go from being tried as a juvenile to being tried as an adult. This means 18-years-olds face much harsher sentences than 17-year-olds. And, “[e]ven if all other determinants of criminal offending change rapidly by age, they do not change discontinuously at 18.” If sentencing has a deterrent effect, people should commit fewer crimes at 18 than they do at 17. According to an analysis of Florida felony arrest data, “there is no significant drop in offending,” between ages 17 and 18.

Instead, maybe the way to reduce crime is cognitive behavioral therapy (CBT), a tool of psychiatry.

CBT, in which patients recognize harmful patterns in their lives and learn to disrupt and replace them with healthier ones, is used to treat a wide range of emotional and psychological ills. Recent research suggests it might also be able to cure society of a lot of its crime. In some studies, people receiving CBT were almost half as likely to commit a violent crime. Still from a video about BAM, a CBT program for disadvantaged youth in Chicago.

In the working paper, “Thinking, Fast and Slow: Some Field Experiments to Reduce Crime and Dropout in Chicago,” Sarah B. Heller and a team of researchers examine therapy-based interventions and their effect on crime. (The title is a reference to a book by Daniel Kahneman.) Though there are a few different programs included in the paper, they share a central assumption: Most people, it turns out, lack self control to a certain extent. But following our impulses works out better for some of us than it does for others. As they write,

“The teenager in a poor area [who is] is not behaving any less automatically than the teenager in the affluent area. Instead the problem arises from the variability in contexts—and the fact that some contexts call for retaliation.”

To illustrate their theory, they offer an example: If a rich kid gets mugged in a low-crime neighborhood, the adaptive response is to comply — hand over his wallet, go tell the authorities. If a poor kid gets mugged in a high-crime neighborhood, it is sometimes adaptive to refuse — stand up for himself, retaliate, run. If he complies, he might get a reputation as someone who is easy to bully, increasing the probability he will be victimized in the future. The two kids, conditioned by their environment, learn very different automatic responses to similar stimuli: someone else asserting authority over them.

The solution here is not to change the poor kid’s response to be the same as the rich kid’s. As the authors note, a “program that taught youth to ‘never fight’” wouldn’t work. Most would, rightly, resist the lesson. And it could have “dire consequences” for the ones who don’t, “when they encounter the challenges that unfortunately remain far too common in disadvantaged neighborhoods.”

The Becoming a Man (BAM) Program 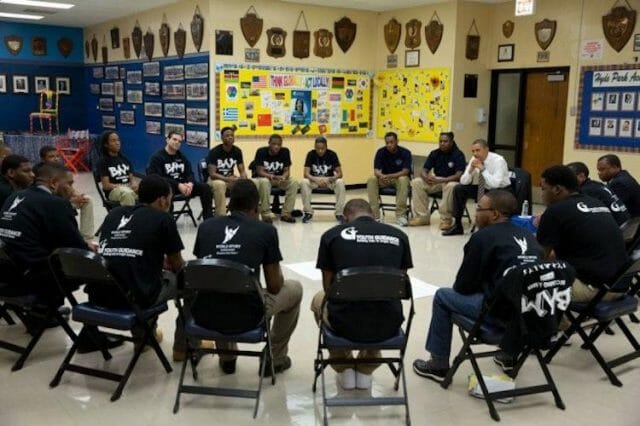 President Obama meeting with participants of the Becoming a Man (BAM) program (Pete Souza, The White House via Facebook)

The overwhelming majority of violent crimes are committed by men, and in the United States, men are 10 times more likely than women to be incarcerated. Because of this, programs that focus on crime reduction often focus on young males.

The researchers examined clinical studies of programs that keep this in mind and focus on teaching kids to regulate their automaticity. These interventions were designed to help young people, “recognize when they are in a high-stakes situation where their automatic responses might be maladaptive,” and slow down and consider them. One of the interventions studied was the Becoming a Man (BAM) program, conducted in public schools with disadvantaged young males, grades 6-12, on the south and west sides of Chicago.

“What makes the interventions we study particularly interesting is that they do not attempt to delineate specific behaviors as “good,” but rather focus on teaching youths when and how to be less automatic and more contingent in their behavior.”

Researchers randomly assigned students to have the opportunity to participate in BAM, as a course conducted once a week throughout the 2009-2010 school year.

The course is actually a program of cognitive behavioral therapy (CBT). CBT helps people identify harmful psychological and behavioral patterns, and then disrupt them and foster healthier ones. It’s used by a wide range of people for a wide range of issues, including to treat depression, anger management, and anxiety disorders. The particular style of CBT used in BAM focuses on three fundamental skills:

1. Recognize when their automatic responses might get them into trouble,

2. Slow down in those situations and behave less automatically,

3. Objectively assess situations and think about what response is called-for.

One thing participants are taught in BAM is that “a shift to an aversive emotion” is an important cue for when they are prone to act automatically. Anger, for example, was a common cue among participants in the study group. They were also taught tricks to help them slow down to consider their situation before acting: including deep breathing and other relaxation techniques. Lastly, they were guided through self-reflection and assessment of their own behavior: examining their “automatic” missteps, thinking about how they might have acted differently. 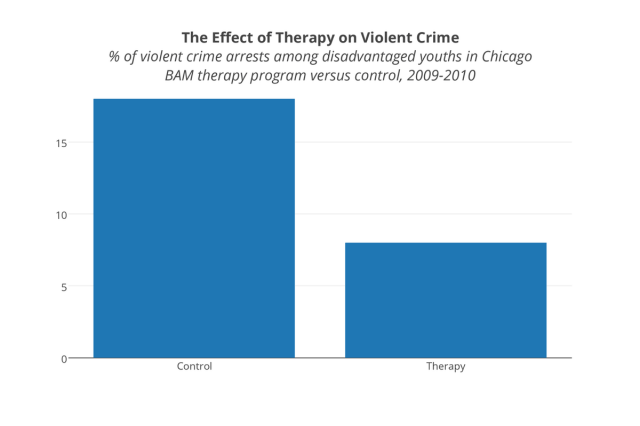 Of course, evaluating whether the therapy itself was the relevant factor here is pretty messy. There’s a lot to these classes other than CBT, and on the surface it looks like a lot of these things could have impacted the results: The programs were administered by adults, who could have created a “generic mentorship effect.” Or maybe simply requiring that they show up to class week after week taught participants self control.

On the technical end, when assessing these studies, researchers made an effort to control for these variables by tracking survey responses before and after the study. The survey included measures of emotional intelligence, self-control, and whether the respondent felt they knew an adult in the school they could trust. “Our estimates let us rule out anything other than very modest effects of BAM on outcomes that are mediated by these candidate mechanisms.”

But there’s another thing: effect of automaticity training has been seen with completely separately developed curricula, in completely different contexts. Similar effects were seen in a CBT-based program in a juvenile detention center in Cook County, Illinois — recidivism rates for participants dropped; and, remarkably, in Monrovia, Liberia. 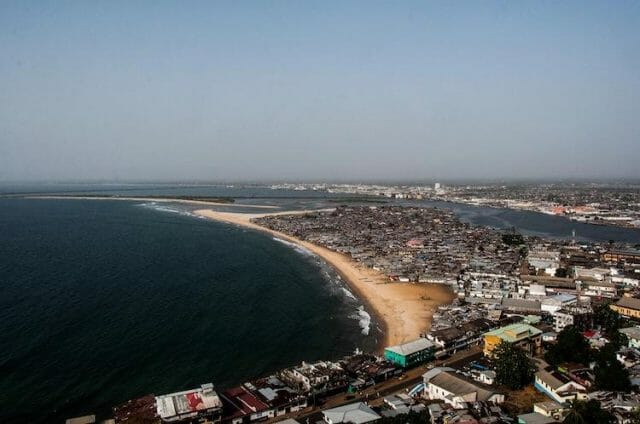 The Liberian study was conducted by economist and Washington Post contributor Chris Blattman, and two of his colleagues. In 2010, Blattman discovered an 8-week program called Sustainable Transformation of Youth in Liberia (STYL). STYL is a local attempt to steer young men away from lives of crime — no easy task in a country where crime is so prevalent. Its founder, Johnson Bohr, had constructed a curriculum out of “every training and therapy manual they could get their hands on”, and honed it through a decade of trial and error. Blattman and his colleagues noted that the curriculum strongly resembled CBT.

Curious as to whether the program had measurable results, they launched a formal study. Subjects, recruited from the slums of Monrovia. A few weeks after the study, acts of crime and violence had fallen by 20-50%.

A year after the program, those improvements had dissipated. But a third experimental group had been given both therapy and $200 in cash. Blattman says that in capital-stricken Liberia, this was a means of giving them work. A year after the program, most of the money was gone — “partly because most men were robbed regularly” — but the behavior change remained. Those who received both therapy and cash were 44% less likely to carry a weapon and 43% less likely to deal drugs. “In the control group,” the study reads “men reported stealing almost once per week on average, and with therapy and cash this fell nearly 40%—equal to 25 crimes per year, per person.” 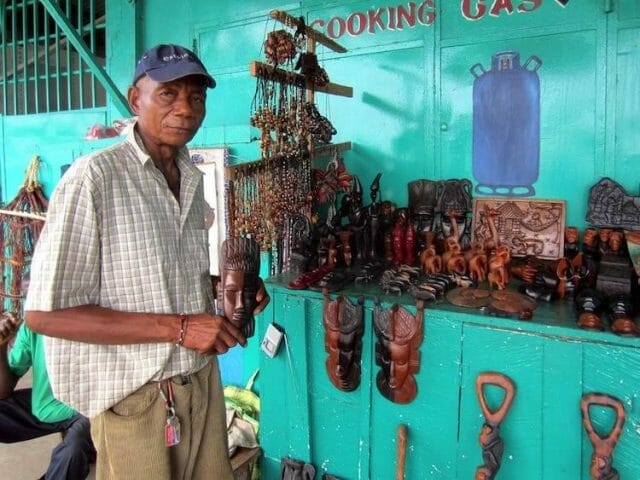 “It’s hard to say [what was going on],” Blattman writes in the Washington Post, “but our sense is that the cash let men keep practicing their new life.”

A similar effect was seen in Chicago. “Unlike the 2009–10 BAM experiment [in which results were no longer statistically significant after a year],” a study notes, “youths who participated in BAM as part of a summer jobs program did show violent-crime impacts that persisted beyond the end of the program period.” In a follow-up conducted 7 months after the program end, participants had a 51% lower arrest rate, for violent crimes, than the control group.

“The economic costs [to a high-crime society] are steep,” Blattman and his colleagues write in the paper on the Liberian intervention. “In addition to the direct costs of crime and violence, output suffers from so many unproductive young people. Crime and instability also hinder economic growth by reducing investment, lowering demand in some sectors (e.g. tourism), or allocating resources to security. In fragile states, such men are also targets for mobilization into election intimidation, rioting, and rebellion.”

Compared to the alternatives, not to mention the cost of crime and incarceration, these interventions are relatively cheap. To grant people both therapy and cash in the Liberian study costs only $530 a person — a one time investment that could potentially deter them from years of criminal activity. “The results imply a level of cost-effectiveness that is at least as favorable as almost any other crime-prevention intervention that has been studied seriously,” reads an analysis of some of the interventions in Chicago.

Which is not to mention the benefit to the program participants. It’s possible many young people could be deterred from lives of crime and corruption by just a little bit of therapy, and a little bit of work.