Lots of people swear by the wisdom of crowds. Mike Merrill lives by it.

Merrill, who works for a software company and pursues artistic projects on the side, allows people to buy shares in his life and vote on what he should do. It began with investors voting on what art projects to pursue. If shareholders advised him well, they could profit when his successful projects increased the demand for his “shares.” 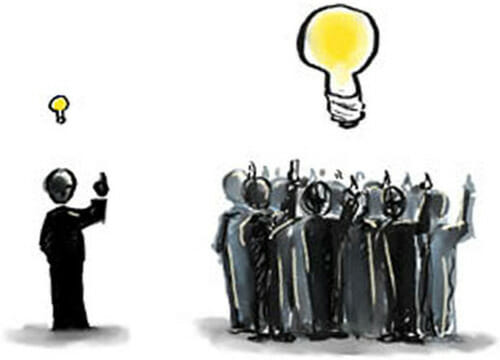 But voting spread to his personal decisions after someone objected to Merrill moving in with his girlfriend without consulting his investors:

“One shareholder promptly complained that the decision, which could easily impact Merrill’s creative output, constituted a unilateral management maneuver that put investor capital at risk. Where was the accountability?”

Merrill sells between $5 and $10 a share, down from his peak of $20, mostly due to interest in his personal decisions, which Merrill embraced as bringing market efficiency to the problem of getting good advice. (A girl Merrill later dated wasn’t thrilled with the idea until she realized that she could read Merrill’s “date reports” to his investors.)

Merrill’s story, reported by The Atlantic, probably will not inspire many people to improve their lives through a self-IPO. But there is a way of investing in shares of people that could have mass appeal: income-contingent loans.

The idea is simple. Individuals apply for loans and agree in return to pay x% of their income for either the rest of their life or a given period. It allows people to take out loans and pay back an amount they can afford. Someone who becomes filthy rich will repay the investor at an extremely high rate, but those who return less on the capital than expected won’t be bankrupted.

Income-contingent loans have been floated as a replacement for the current student loan system since Milton Friedman suggested the idea in 1955. It would not only make student loans less crushing, but also allow people with loans the freedom to pursue less financially rewarding, public-interest careers.

Yale actually did implement a program in the seventies. It went well, until the most successful class members who took the loans refused to continue paying because they felt they had been given a raw deal. As a recipient of funds from the Yale program, Bill Clinton also tried to implement an income-contingent loan scheme, but banks successfully lobbied to kill it.

Outside the public sector, a number of startups have recently tried to apply the idea. Pave and Upstart, for example, allow people to invest in ambitious youngsters. The companies want to help the young “prospects” pursue their dream projects and encourage the investors to offer mentorship. The Thrust Fund lets individuals invest in social entrepreneurs.

If the idea catches on, maybe having a portfolio of people or “prospects” will become common. Will the private sector succeed where the public sector failed?