Investors’ Bias Against Female Entrepreneurs, In One Chart 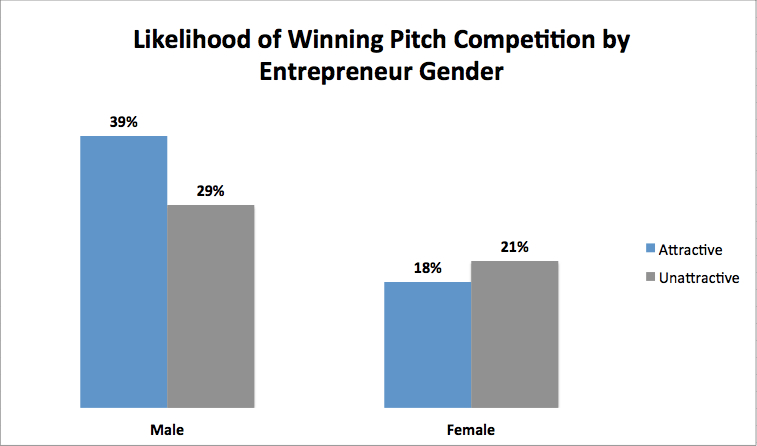 No one really doubts that Silicon Valley has a gender problem. Offices dominated by men defy the tech industry’s meritocratic rhetoric, and only 7% of venture capital money has gone to startups founded by women. Kathryn Minshew, co-founder of the fast-growing women’s career website The Muse, told The Verge that while raising money, a close advisor once suggested they add a man to the founding team for “credibility.”

If Silicon Valley and venture capital have a bias against female entrepreneurs, just how strong is it?

Researchers from Harvard, MIT, and the University of Pennsylvania provide one answer with the above chart, which is adapted from their recent paper. They looked at the results of 3 real pitch competitions in the U.S. in which angel investors rewarded the winners with seed funding. The bias toward male entrepreneurs is evident in the graph; the researchers found that men were 60% more likely to win the competition.

The research also makes the surprising discovery that attractiveness was a major bias, but only among male entrepreneurs. Even when controlling for factors like years of experience and business sector, gender explained 24% of the variation in pitch success while attractiveness explained 36% of success in the competition. The effect of attraction was driven only by men, whereas looks had no significant impact on the women’s chances of securing funding.

As a result, the professors conclude that investors prefer pitches by attractive men.

The research team got similar results from two controlled experiments that isolated gender and looks as variables. In one, amateurs watched two videos of real startup pitches, one with a dubbed male voice and the other a dubbed female voice. The research subjects then chose one company to invest in, and they earned a reward if their pick matched that of an expert panel of judges. The second experiment was similar, except the subjects also saw a picture of the supposed entrepreneur, who was either attractive or unattractive.

The first experiment revealed that people had a preference for male investors (and for the first pitch they heard). The second found similar results to the above graph: men did better, and attractiveness had a big effect on men but not on women.

So do investors discriminate against women? Does an irrational bias warp their decisions?

The authors don’t take a stance in their paper. While some studies find that companies led by women enjoy superior performance, they note that other literature suggests the opposite, and that the tendency of female-led ventures to tackle different markets (and the small sample size given the dearth of female founders) complicates an empirical answer.

We suspect that most people don’t expect women to be less capable of founding and leading a company. But investors’ gender bias could be rational if women face persistent bias beyond the fundraising stage that makes their success less likely. This self-fulfilling prophecy explanation for investors’ bias is still exasperating. But it’s important to know whether venture capitalists are biased or simply passing the buck. Many accounts suggest the former, but more research is needed to quantify and isolate that perception.

What seems very clear is that investors prefer pitches by men. But in a surprising twist, looks may be an equally large blind spot for investors, but only for male entrepreneurs.