Vigilantes Have Renamed “The new iPad”

“The third-generation iPad (announced as “The new iPad”, colloquially sometimes known as “iPad 3”) is a tablet computer designed, developed and marketed by Apple Inc.”

As this convoluted sentence from Wikipedia illustrates, it is unclear what you’re supposed to call the latest iPad from Apple. Apple has officially dubbed it “The new iPad”, but are we really supposed to call it that? If you say you bought “The new iPad”, will people know you’re talking about the 3rd generation model, or will they just think you got a new iPad. What will the next iPad be called, “The newest iPad”? It seems darn unclear. 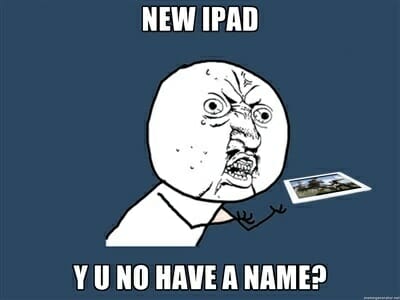 At Priceonomics, we’ve come to expect precise and sequential product naming from Apple – the iPhone, followed by the iPhone 3G, 3GS, 4, and 4S. Because of this precise naming, it’s easy to identify and buy them used on secondary markets like eBay and Craigslist. However, if you’re looking to buy the latest iPad, are you really just supposed to type “the new iPad” into a search box and reliably get results for the 3rd generation model? Won’t you just get a bunch of results for people selling “new” iPads?

What do people call the dang thing?

We decided to examine listings on secondary markets to see what people called the latest iPad when they listed the item for sale. Did they really call it “The new iPad” or did they use some sort of vigilante name like “The iPad 3” or “3rd Generation iPad”? 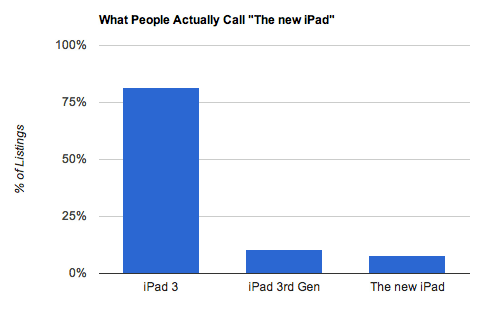 It turns out, practically no one uses Apple’s prescribed name of “The new iPad” to sell their tablet. Overwhelmingly, they use the less ambiguous, though technically inaccurate, term “iPad 3”. People may have cult-like devotion to Apple, but in this case, they disregard Apple’s product naming wishes.

How do retailers handle the crappy name for the latest iPad?

Retailers generally adopt manufacturers’ prescribed names for their product listings. When a powerful manufacturer like Apple selects a confusing name for a product, how do these retailers react?

Like the general public, retailers have chosen to rename Apple’s poorly named tablet. eBay, has dubbed it the “iPad 3rd Gen”. 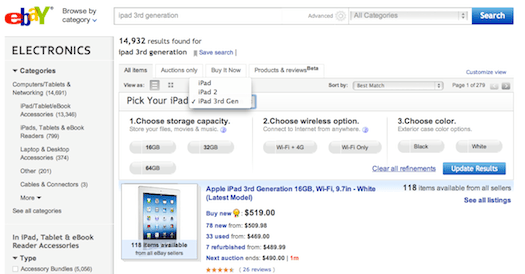 Amazon has emblazoned it with the an all caps: “NEWEST MODEL”. Quite cheekily, they’ve also taken the opportunity to sell you on a Kindle Fire instead. 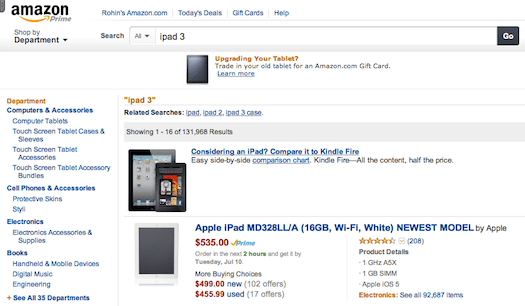 How many disappointed children will get Kindle Fires instead of iPads for their birthdays because of this clever ad?

The market has resoundingly rejected Apple’s name for the latest iPad. Long live the iPad 3, The new iPad is dead! Does it matter that Apple’s appointed name has been disregarded by secondary sellers and retailors? After all, on Apple.com, there is no ambiguity – you’re either getting The new iPad or an iPad 2. Clear product names helps secondary markets function better, but is that even helpful for Apple? And even if it were useful, Apple is currently the most successful company in the world; they might not even care.