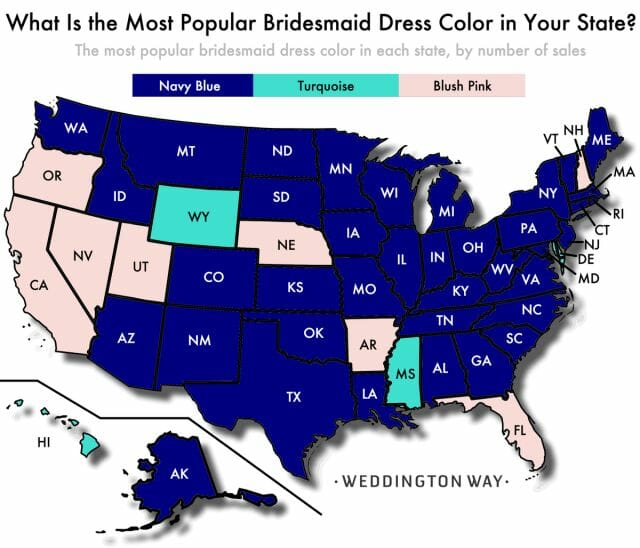 One of the most prevalent stereotypes in modern American society is that “pink is for girls” — but this wasn’t always the case.

For example, in 1918, a trade magazine for baby clothes wrote: “The generally accepted rule is pink for the boy and blue for the girl. The reason is that pink, being a more decided and stronger color, is more suitable for the boy; while blue, which is more delicate and dainty, is prettier for the girl.”

According to sociologist Jo Paoletti, pink, like all colors, was gender-interchangeable throughout most of the 19th and 20th centuries. Then, at some point after World War II, during the rise of mass marketing, a group of American manufacturers created the “pink is for girls” trope, and perpetuated it to sell their products.

Today, many young girls are instilled with the belief that pink signifies gender — largely due to the efforts of marketeers: the color adorns Barbie products, playhouse kitchenettes, and other “female-oriented” toys. Clothing brands, makeup companies, and Hollywood films (Pretty in Pink, Legally Blonde, Grease) have perpetuated the idea that pink is an inherently “female” color.

But when women have the agency to choose the color of dresses that bridesmaids wear at their weddings, is a true “preference for pink” revealed, or is the notion that “pink = girly” largely a myth? As it turns out, women are much more likely to choose blue over pink when choosing these kinds of dresses.

We analyzed sales data from Weddington Way, which sells bridesmaid dresses, to see which colors were most popular and if there were any regional variations in the popularity of different colors. The data we examined spans over three years (from 2013-2015), and includes thousands of national, state, and city-level dress sales. So, what do the numbers tell us?

Blue (as a general color group) is by far the most popular choice, making up 26% of all bridesmaids dresses nationally. This far outpaces traditionally “feminine” colors like pink (15%), purple (14%), and yellow (3%). 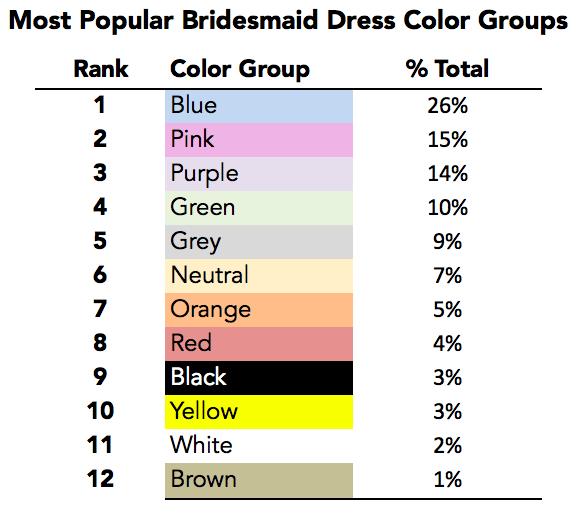 Breaking this down a bit more, blue dominates the list of most popular shades. Representing 11% of all bridesmaid dresses nationally, navy blue comes out on top, but other shades (turquoise, cobalt blue, sky blue, slate blue, ocean blue) make up an additional 15% of the total. In comparison, while blush pink ranks high at 10% of the total, other shades of pink represent just 5%:

Based on the percentage of total bridesmaid dress purchases for Weddington Way stores between 2013 and 2015; remaining percentage points comprised of colors below 1% of total

On a national level, blue dresses reign supreme — but is there more variance from state to state?

As it turns out, in 42 of the 50 U.S. states, blue is the most popular color group for bridesmaid dresses. In particular, navy blue is favored in 28 states, blush pink is preferred in 8, and turquoise in 4. Interestingly, the majority of the west coast (California, Oregon, Nevada, and Utah) purchase pink dresses more than blue dresses.

Below, we’ve included the five most frequently purchased bridesmaid dress colors (ranked in order) by state: 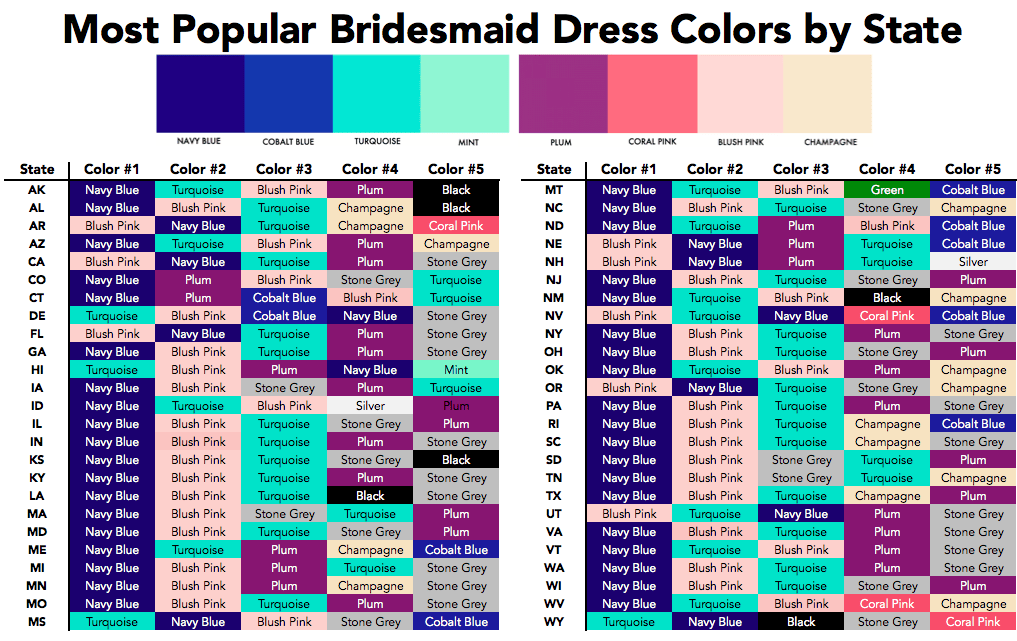 At the city level, there seems to be a bit more variance in pink/blue dress favoritism. Of the 40 cities for which we had the most data, 24 purchased navy blue dresses most frequently, and 16 preferred blush pink dresses: While the list above shows the five most popular bridesmaid dress colors in each city, what it doesn’t show is the plethora of unusual colors hidden in the rest of the data.

Where, for instance, do the most bridesmaids wear orange-colored dresses? Or purple? Below, we’ve listed the city where each color group is the most represented, along with the percentage that color makes up of the total dresses purchased there.

In Philadelphia, Pennsylvania, a whopping 42% of all bridesmaid dresses are some shade of blue. On the flip side, 22% of all bridesmaid dresses purchased in San Jose, California are pink. California — particularly in the southern region — is pretty pink: around 14% of all dresses purchased in Santa Monica, Long Beach, and Los Angeles are pink (around 1.5% of which are “hot pink”, in particular). 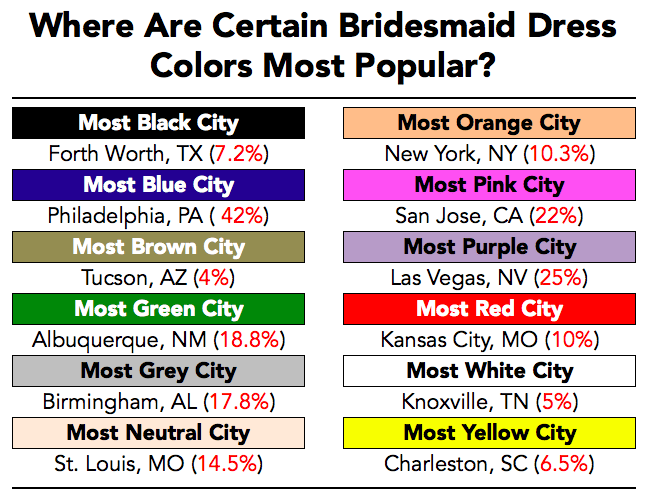 Considering that up until the early 1800s, bridesmaids dressed exactly like the bride — in all white, with a veil — and served the sole purpose of distracting evil spirits from interfering with marriage, it’s refreshing to see that today’s wedding attendees have the luxury of dressing in every color of the rainbow (and then some).

As our data shows, many women have taken full advantage of this freedom, and in the process have dismantled gender-stereotyped colors. In the world of bridesmaid dresses, blue is for girls.