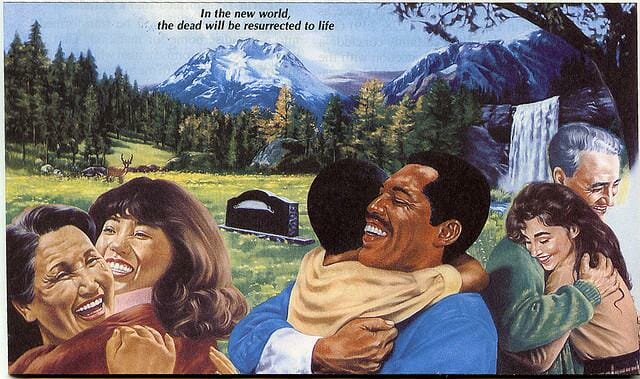 Art from a Watch Tower tract

Do you still hold your parents’ faith? If they raised you a Jehovah’s Witness, it’s likely your answer is, “No.” There’s over a 6 in 10 chance, in fact.

The Jehovah’s Witnesses have their origins in a 1870’s religious movement, called the “Bible Student Movement”. Charles Taze Russell’s independent bible study lead him and his cohort to novel interpretations of the bible, which they codified and disseminated through publications like Zion’s Watch Tower and Herald of Christ Magazine. The church’s Governing Body — which is responsible for refining the church’s interpretation of the bible — is a group of seven men, and is based in Brooklyn. They still oversee the Watchtower Bible and Tract Society corporation, which was formed in 1884 to distribute the movement’s tracts and bibles.

Like many organized religions Jehovah’s Witnesses have their fair share of rituals, prophesy, and dogma. They refuse blood transfusions, believe that Armageddon will happen within in our lifetimes, and they abstain from holidays with “pagan origins” — including Easter, Christmas, and birthdays.

But what tends to set Jehovah’s Witnesses apart in American society is their commitment to evangelism. All baptized members of the church are considered ‘ordained ministers’ and termed “publishers.” This authority comes with a mandate: publishers are required to go out and preach to the best of their ability. Hence the armies friendly young Jehovah’s Witnesses in their suits, spending their Saturday going door to door with bibles and armfuls of colorfully-illustrated Watch Tower pamphlets. 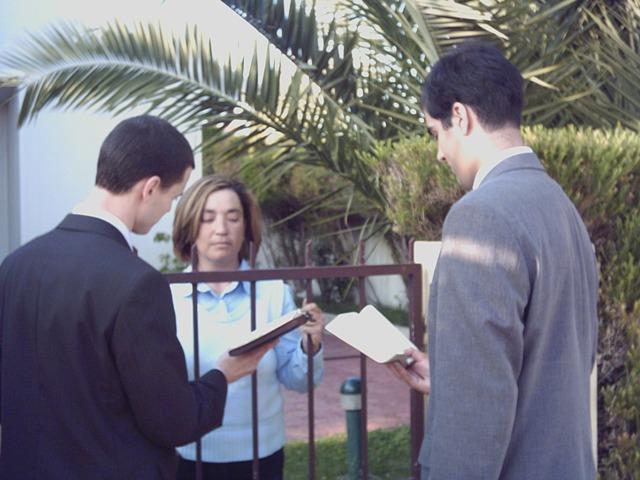 On the point of house-to-house ministry, the Jehovah’s Witnesses organization quotes the bible: “Jesus told his followers to “make disciples of people of all the nations.” (Matthew 28:19, 20)” But unlike many of the more common Christian denominations, Jehovah’s Witnesses are required to report back on their evangelical efforts to a central organization.

If a baptized Jehovah’s Witness fails to submit reports monthly, they’re termed “irregular” and investigated by the community elders. If he or she fails to submit a report for six consecutive months, the publisher is termed “inactive”. Extreme breaches of conduct can result in disfellowshipping — i.e. banning from the community. The church tracks “active” publishers as its main membership statistic. 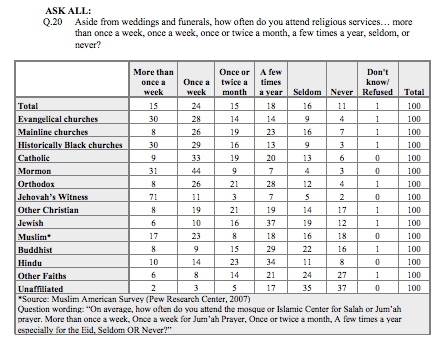 “How often do you attend religious services?” Pew Survey

When you consider the fact that 39% of self-identifying Catholics attend religious services in the range of “A few times a year” and “Never” — or the 46% of Mainline Protestants, 45% of Jews, 68% of Buddhists — Jehovah’s Witnesses have a comparatively steep requirement for membership. The cultures of these faiths allow for individuals to affiliate informally, with minimal external, measurable engagement. Jehovah’s Witnesses, on the other hand, keep track of who is in and who is out and keep track of their participation. They don’t practice infant baptism for this same reason: “Instead of specifying an age to get baptized, God’s Word describes the spiritual condition of those qualified to take that step […] baptism is for those who are already disciples of Christ.” To be in, you really have to be in.

It’s to be expected that this opt-in system and paperwork-heavy user experience would cause a terrible churn rate. This is not a seamless religion by any stretch. 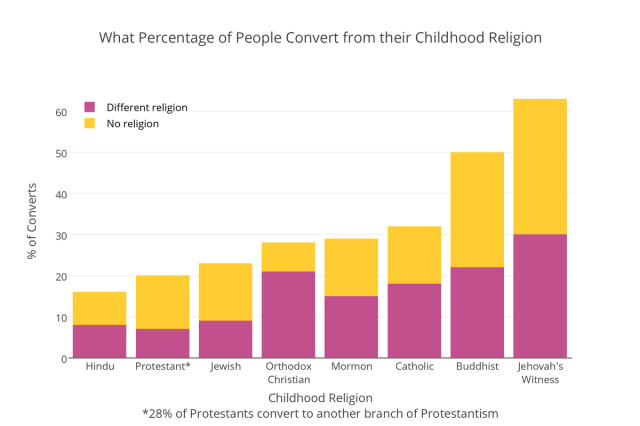 When Pew Research Center surveyed Americans on their religious affiliations, they reported that the United States has a “very competitive marketplace”: “every major religious group is simultaneously gaining and losing adherents.”

A lot of this dynamism is lost in top-line statistics. For example, about a third of all Americans raised Catholic no longer identify as Catholic, but the percentage of the population made up of Catholics has remained relatively stable for the past several decades because these multitudes have been offset by new immigrants to the U.S. identifying as Catholic.

By Pew’s analysis, Protestantism, Catholicism, and Mormonism are all net-negative: there are more people raised in the religious groups who have left, than there are people who have converted into the religious groups. Even Hinduism — which has the lowest attrition rate — is just breaking even. But Jehovah’s Witnesses are actually net-positive. Despite their heavy leakage, Jehovah’s Witnesses are the largest Christian group gaining American membership. They’re winners! 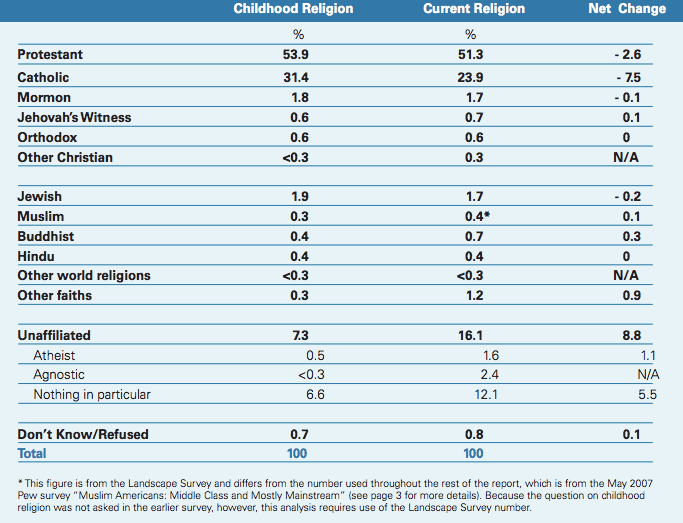 In a shrinking market, it pays to invest in some viral-marketing. Which is where the 1-million-plus Jehovah’s Witness ministers in America come in. They’re all active recruiters. If Jehovah’s Witnesses were a SaaS company, every ‘customer’ would have to spend several hours a week reaching out to prospective customers, or they’d get their subscription cancelled.

Jehovah’s Witnesses gain about 30,000 members a year through baptism — some of those are children of Jehovah’s witness families, and others are converts. If they didn’t lose so many members to conversion they’d be growing at an even faster rate.

We can actually model how much faster, with a simplified formula for viral growth. Viral marketing depends on existing customers recruiting new customers — like how you can get more free storage capacity on dropbox if you refer your friends. If you know how many users you have (current_pop), on average, how many new customers each existing customer can recruit in a year (baptisms_per_publisher), and if you know what percentage of your customers drop out of the service per year (annual_churn_rate), then you can calculate future populations based on your current population:

According to JWFacts.com (whose statistics seem to match up with the annual Watch Tower reports), there were about 982,5233 active publishers in 2002. The conversion rate is tiny, at around 3 baptisms a year for every 100 publishers. But according to this model, the steady stream of converts means Jehovah’s Witnesses can still grow — even if their recruitment strategies are responsible for some of their attrition.

The average churn rate over the past decade has sat at around 1.5% of the total population. If they were retaining members at the rate the Catholic church used to — .4% in the early 1980s — they’d hit 2 million publishers in the United States by 2032. 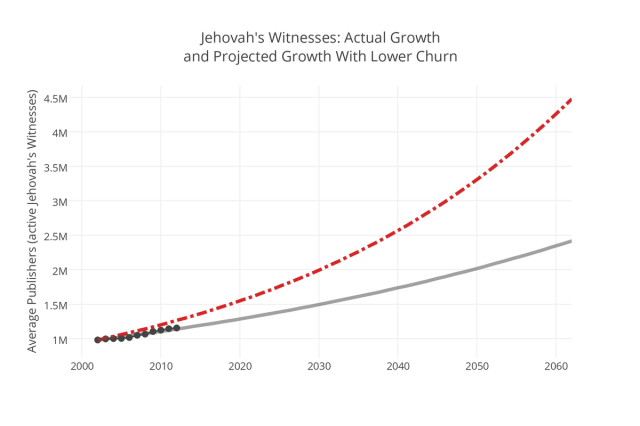 There are a lot of assumptions that go into viral marketing. Companies tend to like these projections because investors tend to like the look of exponential growth, but like many attempts to predict the future they’re imperfect. Some things that could disrupt this model are changes in church policy and prophesy, and major world events. Apparently membership ballooned right before 1975 because church leaders had “built up hope” that the world would end that year. Membership declined in the years following, when it didn’t. The actual Armageddon would also probably halt the church’s viral growth.

Which brings us to another factoid that might disrupt this model: being a Jehovah’s Witness is not for everyone. This market is not infinite. It has a ceiling, and in fact, given the American trend towards secularism in the past few decades, that ceiling is getting lower. But for the time being, Jehovah’s Witnesses make up about 1% of the U.S. population. This means they have a lot of room left to grow, and — unlike the other major Christian denominations — they’re making headway, modest though their growth factor may be.