Just How Big is the Gender Gap in Fine Art? 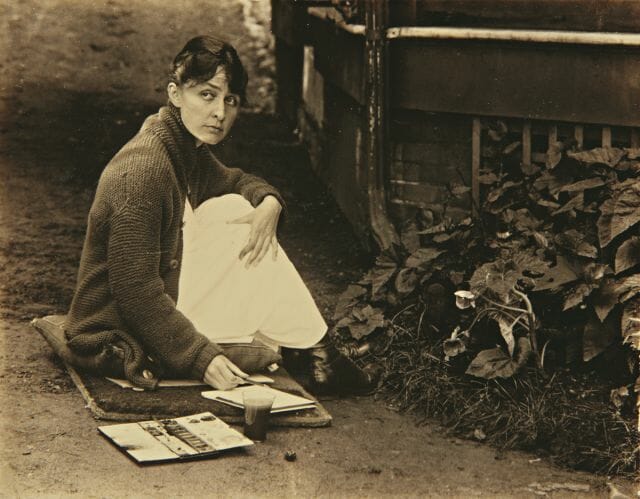 The painter Georgia O’Keeffe. She has 26 pieces in the National Gallery of Art’s collection.

Walk into an art museum, and you are much more likely to see a woman depicted in a work of art than see a piece created by a woman.

Quantifying the gender gap is an inexact science. By some estimates, over 50% of visual artists are women, but less than 5% of the artists featured in the world’s most popular art museum galleries are female. With the exceptions of Mary Cassatt and Berthe Morisot, few female artists who worked prior to the 20th Century are considered part of the great art canon, and very few women artists are studied in art history textbooks.

Just how big is the gender gap for female artists being collected in museums? Since the available data from groups like the Guerrilla Girls mostly concern female representation in contemporary galleries rather than the entirety of major collections, we decided to see if we could crawl the web and figure out trends in gender representation of female artists in museums. We crawled through the National Gallery of Art’s online collection of nearly 100,000 pieces to figure how many of the most featured artists were women and if the gap is shrinking over time.

Our best estimate is that for any given piece in the National Gallery’s collection, there is a 4% chance that it was made by a woman. And if we rank artists by the number of their works collected by the National Gallery, only 4 of the top 100 artists are women. This is primarily because most of the collection is made up of art made over 60 years ago, when the vast majority of highly trained artists were men.

Female artists have made some serious headway in the last several decades. At least, it seems this is true if you slice the data certain ways. Of the 20 most-collected artists who had their first piece acquired between 2001 and 2010, 60% are women.

If you walk into the museum, the deck would be stacked against you encountering a female artist. The reason is simple — in the west, the history of art stretches back much further than the history of gender equality. Of the National Gallery’s most collected artists, many of the 96 men who appear in the top 100 had pieces collected that they created before 1900. All 4 of the women in the top 100 were 20th century artists. If we look at the top 500 most collected artists instead we found only two women who worked before the 18th century (17th Century European artists Magdalena von de Passe and Antoinette Bouzonnet Stella).

In order to understand how much has changed in the last couple centuries, we examined the most collected artists among the pieces created in every decade since 1800. For each decade, we ranked artists by the number of pieces collected by the National Gallery. We then took the top 20 artists per decade, and hand-coded their gender.

Only 5% of the 420 artists, spanning 210 years, were female. The last several decades have seen an increase in the number of highly collected women, but they’ve not yet achieved total parity. Of pieces created in the 2000s, women still only represent 30% of the most collected artists. 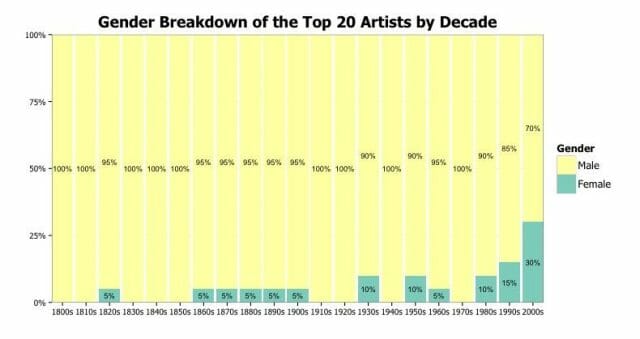 But there is a bias in this analysis that doesn’t tell the whole story. Not everybody who creates work in the 21st century should be called a “21st century artist.” Museums continue to collect new works by artists who are still producing, but achieved their fame many decades ago. For example, the 85 year old painter and printmaker Jasper Johns was one of the most collected artists in the 1960’s and was also in the top 20 in the 2000s. Many of the artists who works were most-collected in 1960s are still collected today, and almost all of them are men.

So let’s just look at newly collected artists. For female artists that emerged in the last several decades, are they proportionally represented? In this view, at the National Gallery at least, new female artists are being collected at a slightly higher rate than males. It would seem that since the 1990s, for the first time in history, a new female artist would have as good a shot — if not a better one — at making it into the National Gallery as a male artist would. 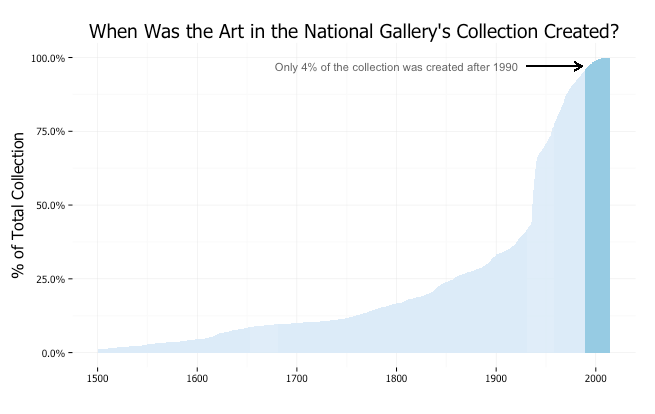 Even though new female artists have a much better opportunity to make it into museums than their predecessors, it will take a long time before our major museums are no longer the exclusive dominion of male art. If art keeps being added to the National Gallery at the current rate, and debut female artists continue to keep their 60% share, we estimate that it will be a little after the year 2600 before half the painting you see in the museum’s collection are by women.