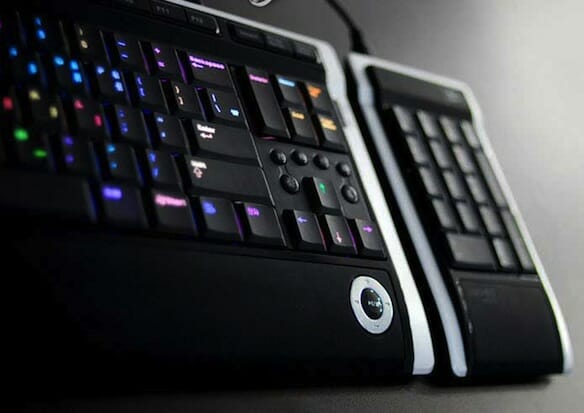 One of the most important parts of your everyday computing life is often the most overlooked item in the long list of components that make up your computer. People spend hundreds of dollars on upgrades to their PCs in order increase their productivity and very commonly neglect the item that they spend the most time using! If you’re reading this, then you already know that it is the keyboard! I know people who have invested thousands of dollars into building a super gaming rig, but still use the same $10 cheap-o keyboard they found in the bargain bin five years prior. The most important factors to consider when shopping for a new keyboard are their methods of connectivity, the type of switches they employ, their layout, and any special features that the keyboard comes with.

The most common type of keyboard connectivity has been, and for the immediate future, will continue to be the standard – that method of connection is a wired connection. Wired connections come in two flavors: PS/2 and USB (Universal Serial Bus). While the PS/2 keyboard was once ubiquitous, it is slowly fading away in favor of USB. Many PCs do no longer even come equipped with a PS/2 ports, this is because the USB port offers a lot more flexibility and potential to add more features besides simple text input.

Next most prevalent would be the 2.4ghz Wireless keyboard. These have become increasingly more popular with those who wish to eliminate the wiring mess around their computers, or those who do not sit near their computer/monitor (such as those who use their television as a monitor). One disadvantage to this type of keyboard would be that they necessitate the use of batteries (since they cannot draw power over from the computer itself). Another drawback is that they require a Wireless Receiver to be connected (via USB) to the computer to receive the signal from keyboard. This poses an issue with computers that have a limited amount of USB ports available. The final issue with wireless keyboards is related to the extra latency or delay that comes with transmitting the signal wirelessly to the computer. This is mostly a concern for those who type at very fast speeds or demand a very fast response time (such as competitive gamers). The extra delay that is introduced will cause the user to “drop keystrokes”, which means that the computer will not register input from the keyboard due to not being able to keep up with the rate of information being transmitted.

Our final option for connectivity is Bluetooth. Bluetooth is a short range, low power wireless standard. Bluetooth is now coming standard on many computers, which eliminates the need to purchase additional USB Bluetooth adapters. A single Bluetooth adapter is also able to connect to multiple devices, which is very beneficial when working with limited ports. Another tangible benefit is that it is not uncommon for Bluetooth devices to have a longer battery life versus their standard Wireless counterparts. As far as drawbacks go, Bluetooth will have the same issues as traditional Wireless devices. Latency or input lag can be even more pronounced compared with standard wireless devices, due to the low power/low bandwidth nature of Bluetooth. As a result, users looking for “high performance solutions will probably not consider Bluetooth as a viable option.

Keyboards come in three different “flavors” of switch mechanisms, which will have the biggest effect on a user’s experience overall. These switches include Membrane, Mechanical, and Scissor Keyswitches.

The most common type of keyboard is of the Membrane variety. Essentially, three rubber dome layers prevent a connection from being made (and a signal from being sent) until sufficient pressure is placed on those layers. To create a connection, sufficient pressure must be placed on the key (and the rubber dome) – the pressure will create an opening in the rubber layer, which will then allow a connection to be made and a signal to be transmitted. Due to the nature of the way these are constructed, Membrane keyboards typically have a spongier feel and also do not typically emit an audible “click” sound. Membrane keyboards will be rated from one to ten million keystrokes in lifespan, although the durability will degrade progressively over time, as opposed to an outright failure. Membrane keyboards also will usually have a very long key travel.

The next type of mechanism is the Scissor switch. This is also a membrane type keyboard. The main difference is that the scissor mechanism allows for an extended lifespan up to 20 million keystrokes. The mechanism allows the keys to be stabilized and reduce wear on the rubber membrane. Other benefits to this type of keyboard are reduced pressure required per keystroke, a “springier” feel, and as a matter of preference, a shorter key travel of 1-2mm versus up to 4mm for a standard Membrane keyboard.

Other Noteworthy Items and Ergonomic Keyboards

There are other special features and configurations that can be factored into your purchase. Some items to consider would be special ergonomic layouts, programmable keys, backlit keys, and even keyboards with special displays.

Ergonomic keyboards are keyboards with a split design to allow a more natural hand position when typing. The idea is that the user will type faster and with less stress on the wrists than a standard keyboard design. Some enthusiast and “gamer” keyboards will come with special keys (pictured above, center model, on the left side of the keyboard). These special keys are programmable with additional software that must be installed. A single keystroke of one of these macro keys can execute an entire series of pre-programmed commands.

Finally, many keyboards are now offered with backlighting – a feature that is great for users who find themselves working in low light conditions on a regular basis.