Leó Szilárd: A Forgotten Father of the Atomic Bomb The idea of a nuclear chain reaction first came to Leó Szilárd while waiting to cross a London street in 1933.

At the time, other scientists knew about the vast energies buried inside the atom’s core, but thought that they were safely bottled up and inextricable. As Nobel Laureate physicist Ernest Rutherford put it, “Anyone who looked for a source of power in the transformation of the atoms was talking moonshine.” Yet Szilárd, a relative newcomer to the field of atomic physics, refused to buy into this attitude: “Pronouncements of experts to the effect that something cannot be done,” he countered, “have always irritated me.”

A Jewish Hungarian refugee, Szilárd would spend nearly a decade making sure the Germans didn’t find out about his theory, instead passing along his research to the U.S. military.

As today (August 6th) is the 70th anniversary of Hiroshima’s bombing, let’s review the role played by Szilárd. While most of the “fathers of the atomic bomb” — J. Robert Oppenheimer, Albert Einstein, and Enrico Fermi — are well-known for the roles they played in the war, Szilárd remains somewhat obscure, despite his contributions. 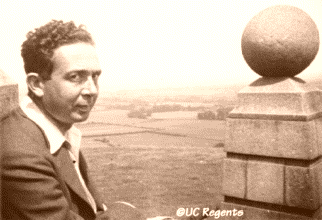 A young Szilárd; via UC Regents

Born in Budapest in 1898, Leó Szilárd spent his early life in a sprawling villa in the city’s Garden District. His father designed bridges and railway embankments; his mother devoted herself to the house and family. According to historian William Lanouette, who covered Szilárd’s life in Genius in the Shadows, the future progenitor of nuclear weapons disliked violence: he once walked out of a fencing class, never to return, after being spurred by his instructor. He was also reputed to faint at the sight of blood.

But his physical timidity did not carry over to other dimensions of his personality.

“Just tell me the facts of physics, and I’ll make up the theories myself,” he told Nobel Laureate Professor Max Planck at the University of Berlin. The young and brash Szilárd became close friends with another Nobel Laureate, Professor Albert Einstein, and there were periods when the two of them enjoyed one another’s company every day. Their freewheeling discussions covered everything from God and religion, to paradoxes and riddles. Frequently, these talks resulted in theories and inventions: together, they designed a refrigerator with a novel electromagnetic pump containing no moving parts. 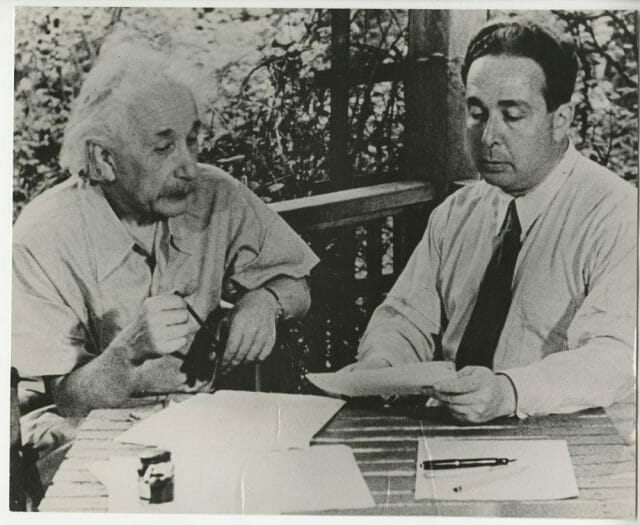 Troubled events started to intrude on and distract from these promising beginnings. When Szilárd’s family fortune was wiped out by the hyperinflation of Weimar Germany, he thought about switching fields to economics. Then came the Third Reich.

“Hitler and his Nazis are going to take over Europe,” he admonished his family members back in Hungary. “Leave Europe before it’s too late!” Yet those closest to him felt he was overreacting and trying to be prophetic: “Civilized Germans would not stand for anything really rough happening,” one friend insisted.

Always cautious, Szilárd made sure he had two suitcases ready to go at all times. “All I had to do was turn the key [to the luggage] if things got really bad,” he say, years later. A couple months into Hitler’s chancellorship, Nazi thugs organized a weekend to boycott Jewish businesses, and began gathering and beating Jews in the streets. With his “life savings hidden in [his] shoes,” Szilárd fled to Vienna on an empty train without incident. The following day, crowds of people were on the same train, and it was stopped by the Nazis who forced many Non-Aryans to turn back. “It just goes to show,” Szilárd recalled, “that if you want to succeed in this world you don’t have to be much cleverer than other people, you just have to be one day earlier.” The incident left a lasting mark on Szilárd: for the rest of his life, he’d keep two suitcases packed and ready.

In 1933, Szilárd found himself in London with thousands of other Jewish refugees. For nearly half a year, he hadn’t given physics much thought — until he heard Rutherford’s “moonshine” proclamation. Admittedly, Rutherford’s credentials in atomic physics were nonpareil: he’d been the first person to knowingly split the atom, a feat he’d accomplished by launching protons towards them at high speed. However, the proton and the nucleus, both positively-charged, repelled one another, making collisions infrequent and difficult to bring about.

Yet Rutherford, and many other physicists of the time, failed to acknowledge the role of the newly-discovered neutron, a subatomic particle nearly the same size and mass as the proton, which had no net electric charge.

While waiting at a stoplight, Szilárd had his revelation:

“…It suddenly occurred to me that if we could find an element which is split by neutrons and which would emit two neutrons when it absorbed one neutron, such an element, if assembled in sufficiently large mass, could sustain a nuclear chain reaction.”

Through a certain series of events, splitting an atom didn’t need to be a solitary event, supposed Szilárd. A neutron could cause an atom to split and release two more neutrons, which would, in turn, go on to split two more atoms that released four neutrons. This process would lead to an exponential sequence — 1, 2, 4, 8, 16, 32, 64, 128, 256 — literally, explosive growth. 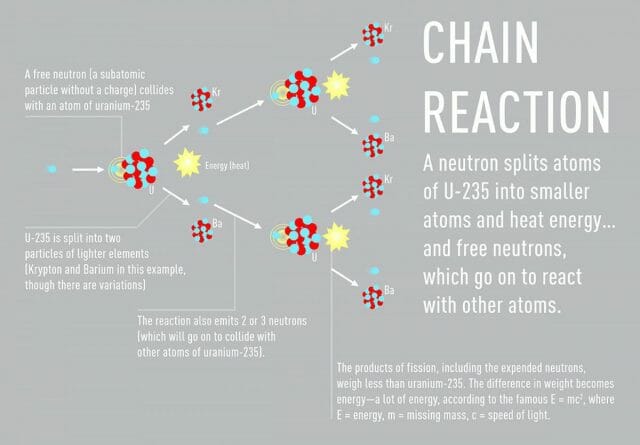 Simplified diagram of a nuclear chain reaction; via visually

With this theory, Szilárd approached two respected physicists (both of whom would go on to win the Nobel Prize in coming years), but neither showed the slightest iota of interest. Rutherford was similarly unimpressed: “I was thrown out of [his] office,” Szilárd recalled.

Nonetheless, the young physicist continued to pursue his self-described “obsession.” Despite having an idea of how a nuclear reaction could take place, he still didn’t know if it was actually possible, or which element might have the specific properties needed for it to occur. He began with educated guesses — Beryllium and Radium — but experiments ruled them out, and he couldn’t get the funding for a systematic test of all the elements. In 1939, six years after Szilárd had formulated his theory, a pivotal experiment took place: German physicists bombarded uranium with neutrons, causing it to split (or “fission”) in two, and release a few extra neutrons in the process.

Szilárd immediately realized the scientific and geopolitical implications of this. After a successful experiment of his own to more exactly simulate the conditions that would take place in his hypothetical reactor, he realized the very real implications of his theory. “That night,” he remembered, “there was very little doubt in my mind that the world was headed for grief.”

Meanwhile, the Nazi sphere continued to expand like its own kind of chain reaction. Szilárd, who grew particularly concerned about the fall of Czechoslovakia (home to Europe’s largest uranium reserves at the time), decided to voice his concerns in a letter to then-U.S. President Franklin Delano Roosevelt.

To give his note extra oomph, he asked his friend, the celebrity-scientist Albert Einstein, to sign the letter instead of him. Though Einstein’s famous equation, E=mc^2, formed the basis for much of atomic theory, he’d been immersed in his own quixotic quest to unite the various physical forces into one elegant, unifying mathematical theory, and was taken aback by the ideas Szilárd laid out before him. Nonetheless, he agreed to sign: 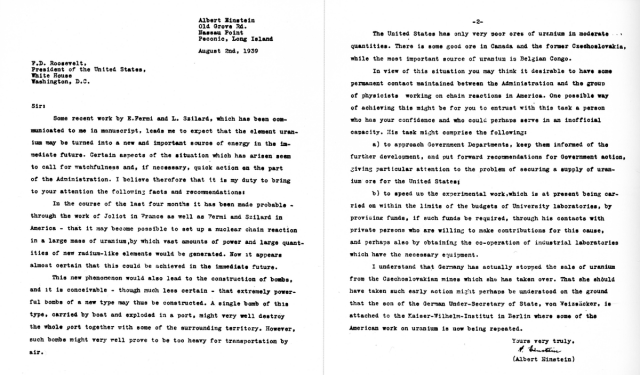 “…Extremely powerful bombs of a new type [can now] be constructed,” Szilárd warned in the his letter. “A single bomb of this type, carried by a boat and exploded in a port, might very well destroy the whole port along with some of the surrounding territory.”

This peaked Roosevelt’s interest. Two months later, after looking into the matter, the U.S. President wrote a response to Einstein (which, of course, was really directed at Szilárd): Shortly thereafter, a government committee was established to release funds to streamline further research. Eventually, this small trickle of federal support would mushroom into the Manhattan Project, a research and development operation that would produce the first atomic bombs. Over the course of the war, the U.S., with a little help from the U.K. and Canada, invested $2 billion (the equivalent of $26 billion in 2015 dollars) in the project, and employed more than 130,000 people.

Along with the brilliant Italian physicist Enrico Fermi, Szilárd led these research efforts. On December 2nd 1942, in a squash court under the University of Chicago’s Stagg football field, the duo completed the world’s first nuclear reactor. They called it, affectionately, “the pile.” Despite realizing the culmination of his efforts, Szilárd was less than elated.

“I shook hands with Fermi,” he recalled, “and I said I thought this day would go down as a black day in the history of mankind.” An illustration of the “Pile 1” reactor 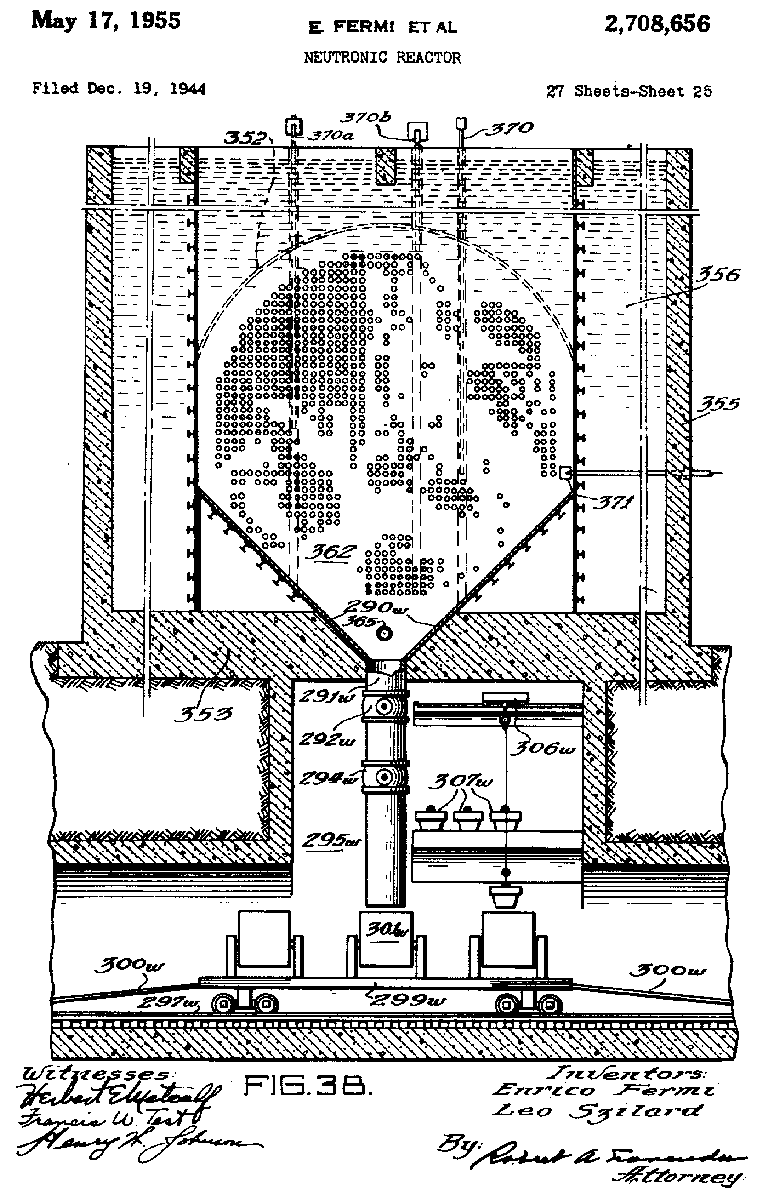 In parallel with his scientific contributions, Szilárd maintained an innate understanding of the implications of his findings, and how they could impact the course of history.

The most enduring instance of this occurred while Szilárd was searching for a way to slow zooming neutrons down to the slower speeds, so as to induce a nuclear reaction. He and Fermi had tried encasing the reactor in graphite, but it wasn’t working. It took Szilárd to realize the graphite’s manufacturing process had introduced small impurities that were absorbing the neutrons. He arranged for a purer form of graphite to be made, but more importantly, also insisted they keep the results secret. Fermi found the notion of secrecy unscientific, but Szilárd ultimately prevailed.

There was no way to know it at the time, but this is where the German effort faltered. The Germans never did discover why their graphite wasn’t working, and opted instead for substitutes like heavy water which were too rare to be useful.

While Fermi thought that the conservative thing to do was to play down the possibility that [a chain reaction] may happen, Szilárd held the opinion that it would certainly happen, and that he should take all of the necessary precautions to prepare for the worst. 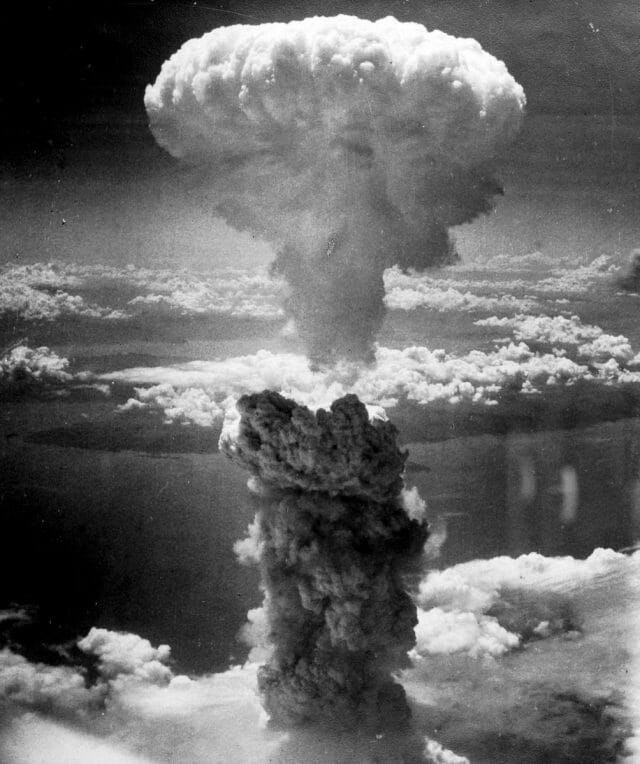 As Szilárd’s research came of age, it also became militarized, and Szilárd himself was increasingly cut out from the final stages of the bomb’s development. Major General Leslie Groves, who led the Manhattan Project, reportedly did everything he could to ensure that the quirky Hungarian received no position on the various post-war atomic commissions. Szilard was “the kind of man that any employer would have fired as a troublemaker,” the general later defended.

After the bombings of Hiroshima and Nagasaki killed more than 200,000 in August of 1945, Szilárd further alienated his superiors by saying the weapons were “a flagrant violation of our own moral standards.” For the rest of his life, he vehemently advocated for arms reduction.

Though his particular combination of skills didn’t yield him the acclaim or Nobel Prize won by many of his peers, this was an inherent cost to his secrecy and fit his modus operandi of trying to maximize his influence on the world without much regard for recognition or fame. As Szilárd would say years later, “In life you must often choose between getting a job done or getting credit for it.”

This post was written by contributor Randyn Charles Bartholomew.  Unless otherwise noted, quotes are from William Lanouette’s Szilárd biography, ‘Genius in the Shadows‘