Life as a Professional Pumpkin Carver 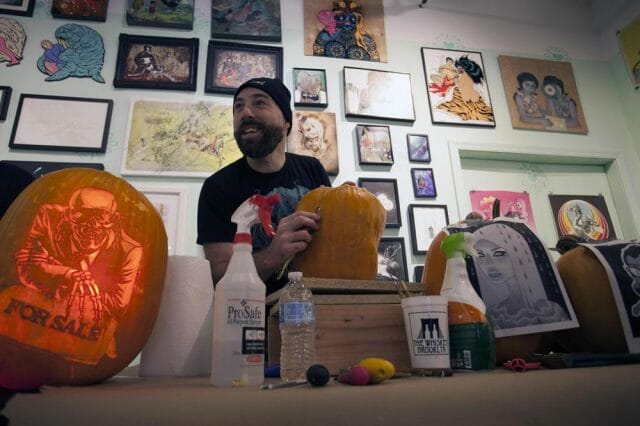 For most people, carving a pumpkin consists of a few unenthusiastic jabs of a kitchen knife, about 10 minutes or so of undivided attention, and a result vaguely resembling a face.

For Marc Evan, it is a transformative artistic experience.

When Marc carves a pumpkin, the room disappears around him. As he reaches for his linoleum cutter, he enters a meditative state, straddled somewhere between the disparate cosmic universes of art and horror. With practised precision, he peels away chunks of the bright orange orb until it resembles, with striking accuracy, the weathered face of Yoda:

As a co-founder of Maniac Pumpkin Carvers, Marc is one of the world’s premier “pumpkineers,” producing mind-boggling works of art on an array of squash varietals. Along with his partner, Chris Soria, he’s managed to forge what is surely one of the most unique careers in New York: for up to 18 hours a day, he hunches over a desk creating ephemeral masterpieces that sell for upwards of $700 a piece.

What’s life like as a professional pumpkin artist? And how does one carve his or her way into the industry? 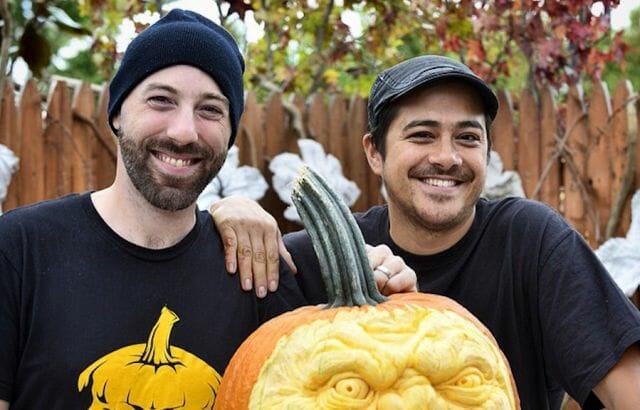 On a fateful afternoon in the early 1990s, Marc Evan and Chris Soria were seated next to each other in a sixth grade Spanish class. Sharing a mutual infatuation with horror movies, the youngsters became close friends.

“We were the kids who were drawing all the time — the art kids,” says Marc. “But were were also intensely into Halloween, horror, and all things geek culture.”

In high school, the duo was given permission to transform their Long Island, New York high school into a full-fledged haunted house. While the event was supposed to be kid-friendly and only “mildly spooky,” Marc and Chris assembled a team of fellow art kids to be “actors,” then proceeded to scare the living daylights of out of their guests:

“Chris was dressed up as something out of Texas Chainsaw Massacre. He had a real chainsaw he’d removed the chain from — a working chainsaw! He was chasing me through the house, swinging at me with it, fake blood spurting everywhere. Kids ran out screaming and crying.”

Aside from their shenanigans, Marc and Chris exhibited tremendous artistic talent and were both granted entry into Parsons School of Design, one of the country’s most prestigious art institutions. The pair explored a wide array of mediums — illustration, painting, photography, murals, and digital works — and always remained open to experimentation. “We’d get an idea,” says Marc, “then try to figure out the best way to do it regardless of what the medium was.” 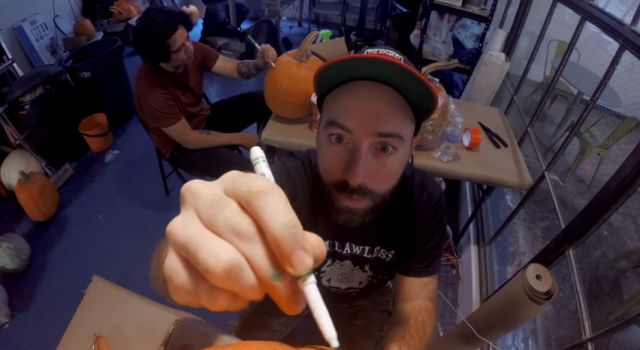 Meanwhile, to pay their way through school, the two friends found work at popular bars and restaurants in New York City. It was here that they first began experimenting with carving pumpkins.

“We’d carve pumpkins in our downtime during work,” says Marc. “It began innocently enough, just as a fun thing to do to get some decorations up for Halloween. But we kept wanting to push the envelope.”

Marc and Chris were both ruthlessly competitive types: each time one carved a pumpkin, the other would spend hours trying to outdo it. Over a period of two years, they went from carving simple jack-o-lanterns to ridiculously intricate works of art.

The Birth of Maniac Pumpkin Carvers 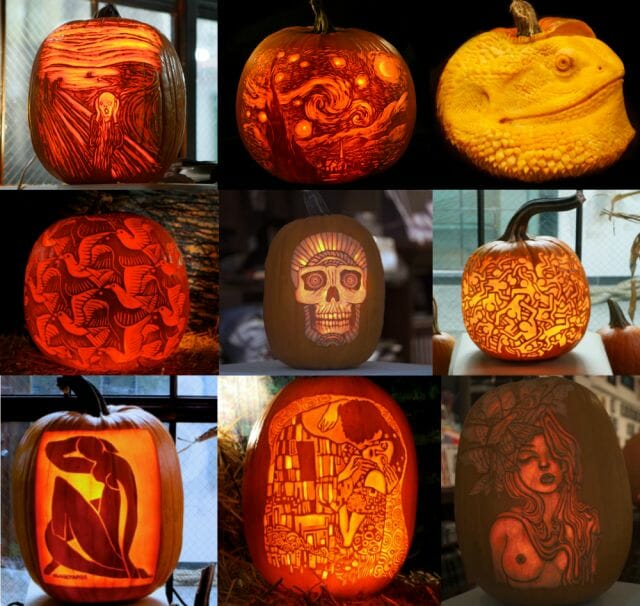 Around Halloween of 2007, Marc and Chris began taking photos of their pumpkins and posting them to a Flickr account. Fortuitously, an editor at Wired Magazine came across one of the images and published a short write-up on them.

The results of this tiny feature could not have been forecasted: almost immediately, Marc and Chris were flooded with inquiries and orders — including a massive request from the New York Yankees. Marc recalls:

“It was right around the World Series, and Yankee Stadium called us to make fifty pumpkins for their skybox seats, each with this intricate logo design. At that point, we figured it was probably time to start a business.”

With little experience in the business world, the two artists charged the Yankees $50 per pumpkin, and ended up taking a loss on the deal.

The duo transformed their tiny apartment into an impromptu art studio, and within a week it was littered with pumpkins of all shapes and sizes, pounds of pulp, and an unlimited supply of roasted seeds. As word of mouth spread, they attracted more clients, all the while doing everything themselves — reaching out to prospective clients, managing logistics and accounting, purchasing pumpkins, de-pulping them, drawing out designs, and doing the actual carving.

In 2008, under the moniker “Maniac Pumpkin Carvers,” Marc and Chris launched a website to advertise their abilities. Unbeknownst to them, their journey had just begun. 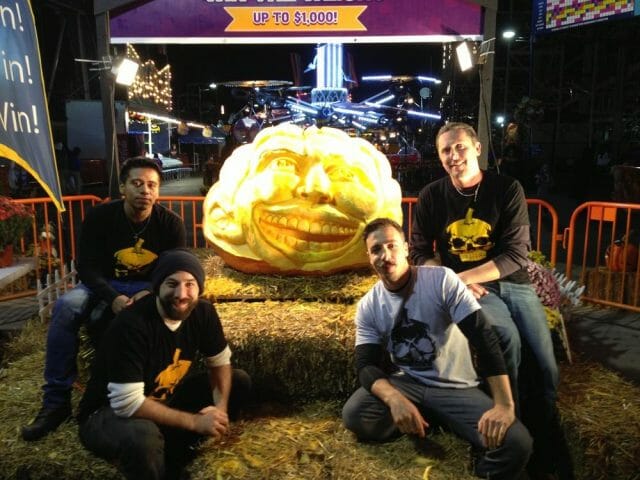 A few members of the Maniac team displaying a giant work

Today, Marc and Chris have built Maniac into a robust pumpkin carving enterprise — the largest of its kind in the United States.

As demand has grown, they’ve learned to adjust their prices accordingly. Pumpkins start at around $150 for a simple logo (usually 2 hours’ worth of work), all the way up to $700+ for complex, custom designs (12 hours+ of work). 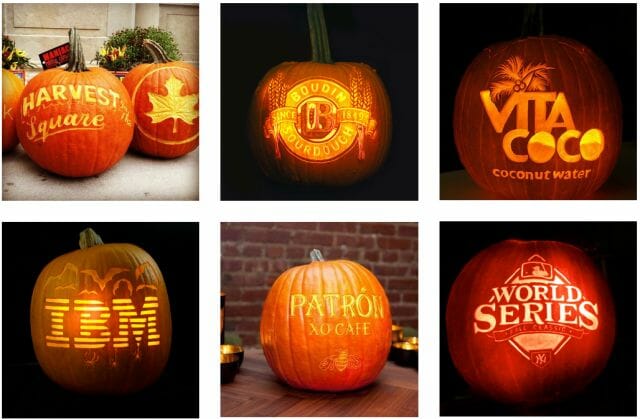 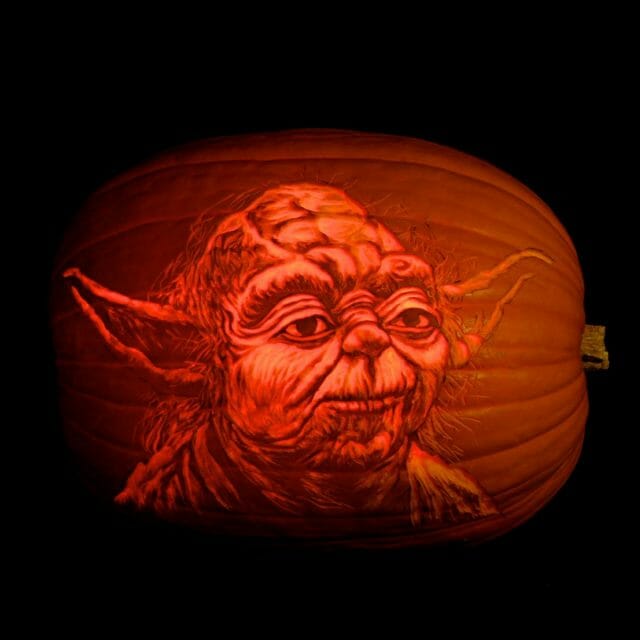 The Maniac team will accept virtually any request, whether it be from a business or an individual. This permissive attitude has led to some truly strange orders.

“I’d have to say the weirdest was an online men’s magazine who wanted us to do a silhouette of [rapper] Ice-T’s girlfriend — she’s kinda famous for her large behind, I guess,” laughs Marc. “We also get an occasional request to do a portrait of someone’s friend, family member, or boss. Those can be fun.”

Lasting only from the end of September to the end of November, the pumpkin carving season is very seasonal. Because of this, the Maniac team must cram as many of these orders as they can into an 8 week period without sacrificing their artistic integrity. This year, Marc estimates they’ll carve around 500 pumpkins.

Once a two man apartment operation, Maniac has greatly expanded to meet demand. They employ six additional carvers, most of whom are friends from art school. Marc’s wife, Janina, runs most of the business operations and interfaces with clients, allowing Marc and Chris to devote 100% of their time to the creation process. The team works from a 20,000 square-foot warehouse in Brooklyn — a pop-up space they affectionately call “Maniac HQ.” Inside, you’ll find a hodgepodge of tools scattered across desks, hundreds of fresh-from-the-farm pumpkins, and walls plastered with original artwork.

Inside the Pumpkin Carving Process

While each pumpkin design requires a slightly different approach, there are certain consistencies in the Maniac team’s process.

When a company or individual reaches out with a design, the team first must engage in an intense back-and-forth with the client to ensure the idea is being properly interpreted. “We can’t afford to carve multiple pumpkins if it’s not right the first time,” says Marc.

Once the right pumpkin for the job is selected and gutted, a Maniac artist will carefully hand-sketch the design onto the fruit. Then, using an impressive array of sharp objects, he will get to work.

“Over the years, we’ve experimented with a variety of tools,” says Marc. “We use linoleum cutters, wood carvers, a bunch of different clay sculpting loops, X-Acto blades, lemon zesters, paring knifes — anything that’s sharp can usually be enlisted in some capacity.”

For gouging out innards, though, nothing beats the “little plastic scoops” that come in most children’s pumpkin carving kits. After eating as many pumpkin seeds as humanly possible, they hand them out in giant bags to anyone who comes by the studio; the rest of the waste — pulp, strings, and the like — are composted.

Most Maniac designs are not carved, but rather slowly scraped away from the surface, using varying levels of depth to create a shadowing effect. A regular candle usually doesn’t suffice in lighting these; instead, the team wires each pumpkin with a candelabra CFL bulb before delivering it to a client.

How to Carve a Ridiculously Awesome Pumpkin 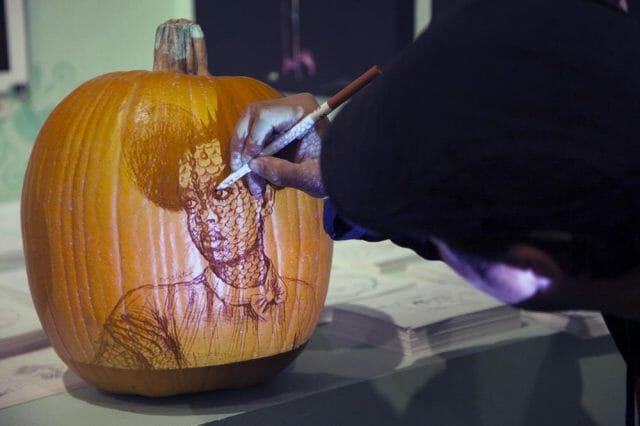 1.  Pick a pumpkin with a long, healthy stem. It’ll look prettier, but also last longer.
2.  Before carving, wash the pumpkin to remove any surface dirt or dust.
3.  When carving, don’t cut off the stem; instead, cut a hole on the bottom, or the
back. The stem provides the pumpkin with nutrients that elongate its life.
4.  Plan your design out: sketch it on paper first, then on the face of the pumpkin.
5.  If your pumpkin is starting to wilt a little, soak it in a tub of ice water for a
few hours. It will firm up significantly.

“When we’re carving, you have to move really quick,” says Marc. “The minute you cut into a pumpkin, it already starts degrading. You’re working with a living thing, and the process changes as you’re going along.”

Once a Maniac masterpiece is completed, its longevity depends on how it’s cared for. If it is left completely untouched, sitting outdoors, it could survive as little as 3 days; if it’s “babied” following the tips above, it could last up to 3 weeks.

In any case, Marc seems to be at peace with the fact that his pumpkin masterpieces are ephemeral.

“We find beauty in the impermanence,” he says. “Artwork is best enjoyed in person, and pumpkins are meant to be experienced in the moment. I wouldn’t change that.”

The Power of the Pumpkin 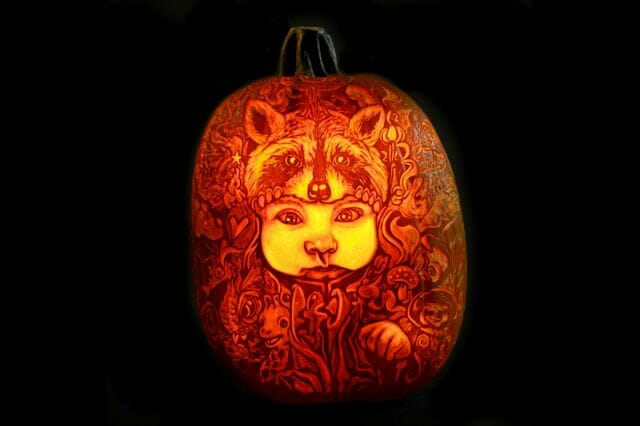 Maniac is one of very few professional pumpkin carving businesses that operates in the United States, but in Marc’s estimation, the industry is growing. “There are very few of us who do this for a living, but those who do it all know each other and collaborate,” he tells us. “I’ve never met a pumpkin carver I didn’t like.”

But is carving pumpkins for 8 weeks a year enough to financially sustain the 35 year-old in ever-expensive New York City?

“That would be the dream — to just be a pumpkin carver,” he laughs, “but no. It does get us through the winter though. The fact that we can pay any rent at all with pumpkins is amazing, you know?” Throughout the rest of the year, Marc and Chris cut a living as commissioned muralists and designers.

Ultimately, for Marc and his team, the work isn’t about the money; it’s about innovation.

“I never imagined I’d be jabbing at pumpkins for a living,” he says. “It’s made me realize that, if you’re creative enough to try something really weird and go for it, you just might be able to carve a career out of it.”