In a previous blog post, we pointed out that it’s expensive to live in San Francisco. A one bedroom apartment in the city rents for $2,800. In a follow-up, we again told people what they already knew - living anywhere in the Bay Area is expensive. Within 60 miles of San Francisco, the median price of a one-bedroom is $2,200. That’s expensive, but at least it’s possible to save money by living outside San Francisco.

Oakland caught our eye. Located just 12 miles and a quick train-ride away from San Francisco, the median price of a one-bedroom is $1,400. That’s half price of living San Francisco! Sure, prices have increased 33% percent over the last two years (the 6th fastest rate of growth in the Bay Area), but the price is still relatively low for the area. 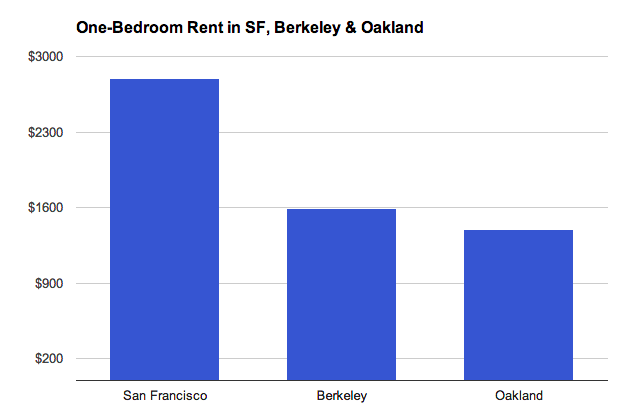 We decided to give Oakland a closer look. How much does it cost to live in the city? Why is it inexpensive compared to San Francisco? How has the city changed over time?

Priceonomics is now tracking rent prices in every city in America, including Oakland. (If you'd like to learn more about the methodology or become an early customer of the data, get in touch here).

While the median rent in Oakland for a one bedroom is $1,400, some areas cost quite a bit less and others quite a bit more. 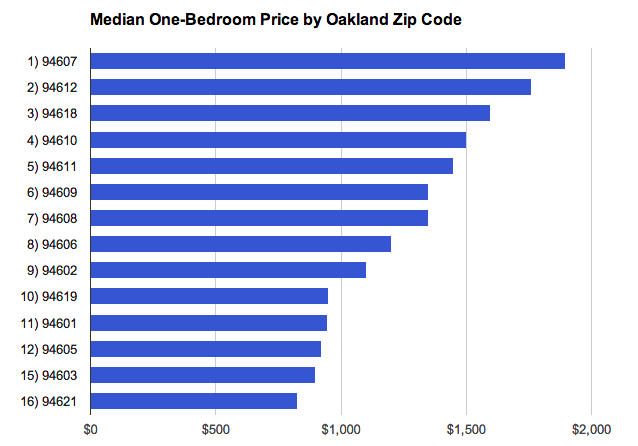 Between different zip codes, the price a one bedroom can vary from $825 a month (in East Oakland) to almost $1900 (in the area that includes Jack London Square, a desirable downtown-waterfront location).

Let’s group the data by region instead to see what areas are more or less expensive. 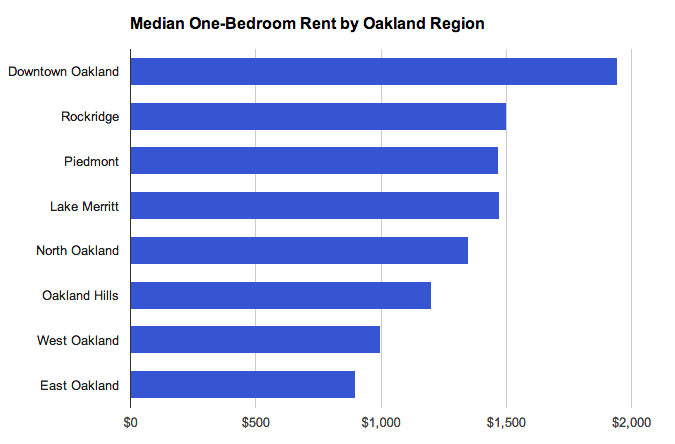 Analyzing the apartments by region tells a similar story.  Downtown Oakland is the most expensive place to rent a one bedroom. East Oakland is about half the price.

Even controlling for the size of the apartment, the price per square foot of an apartment in Downtown Oakland is 78% more expensive than East Oakland. But that’s still substantially less expensive than apartments in San Francisco or Berkeley. 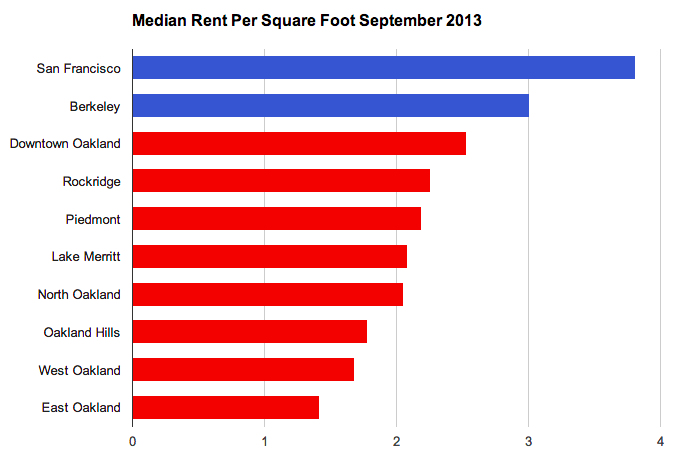 Finally, let’s look at how fast rent has increased by neighborhood over the last two years. 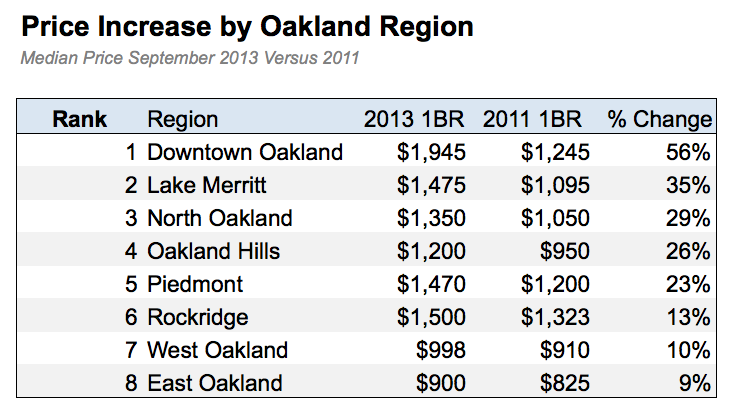 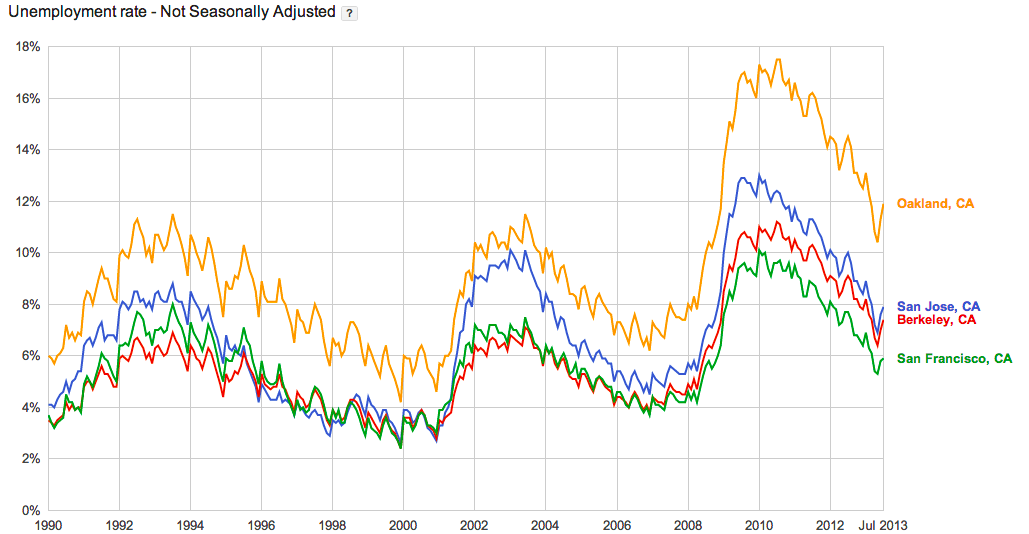 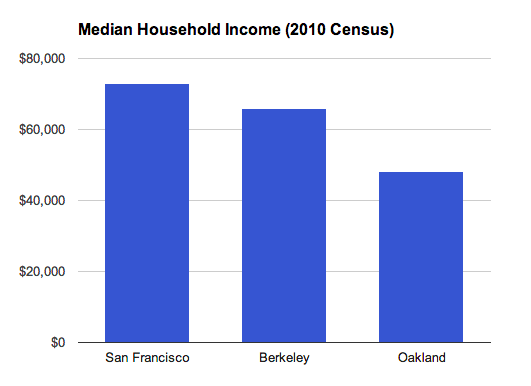 The percentage of the population in the middle income bucket in each city is roughly similar. However, Oakland has more households earning less than $50K per year and fewer earning $100K or more. 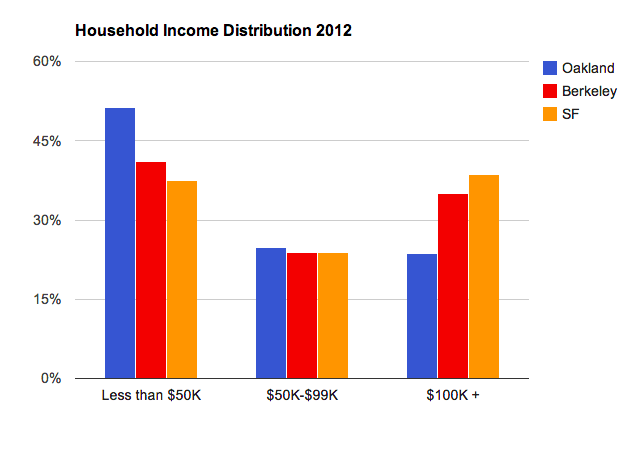 From 1950-1980, Oakland (along with San Francisco) experienced 30 years of population decline. (Berkeley, however, stands out for having a very groovy growth rate in the 1960s.) From 1980 to 2000, the city’s growth rate rebounded. The decade from 2000 to 2010 appears to be a bad one for the city. More people left than arrived even as neighboring cities continued to grow. Since 2010, however, the city has been growing as quickly as San Francisco and Berkeley. 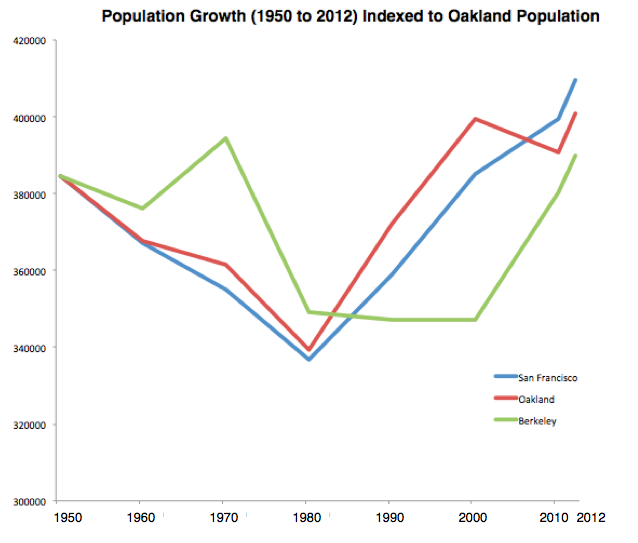 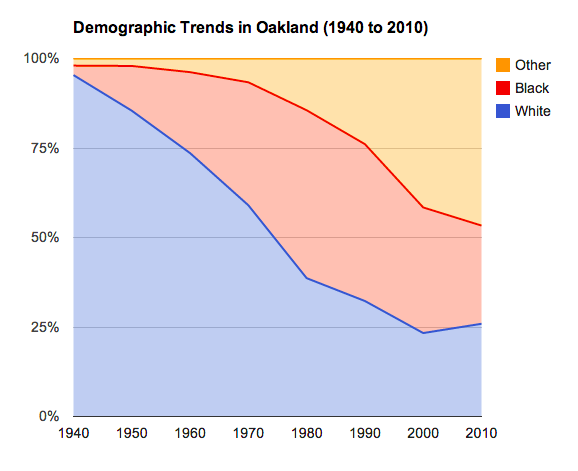 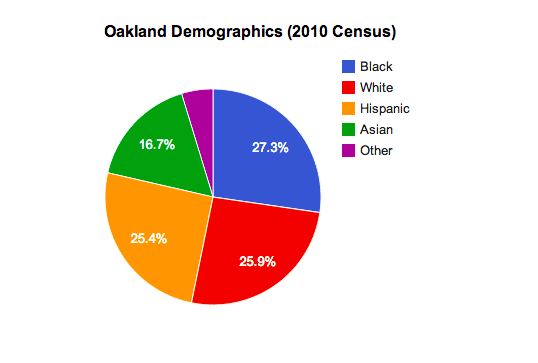 When people talk about living in Oakland, inevitably the topic of crime comes up. Rates of violent crime are much higher in Oakland than in San Francisco and Berkeley. The below chart shows the number of reported crimes per 100,000 inhabitants.

At the same time, the number of police officers in Oakland has been falling over the last four years. 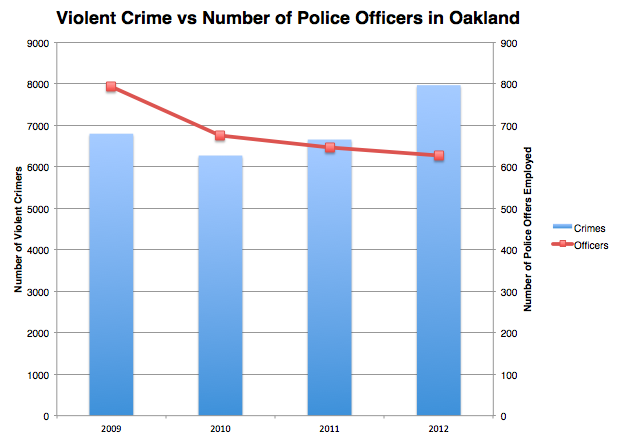 Oakland is changing rapidly. Rents have increased 33% over the last two years, the long term population stagnation trend has reversed, and the city is home to a diverse population with (relatively) low income inequality. People frequently comment that there is a lot of crime in Oakland, and the data indicates that they are right. But Oakland is changing fast, and that too could change.