Which Monarchs Were More Belligerent: Kings or Queens? 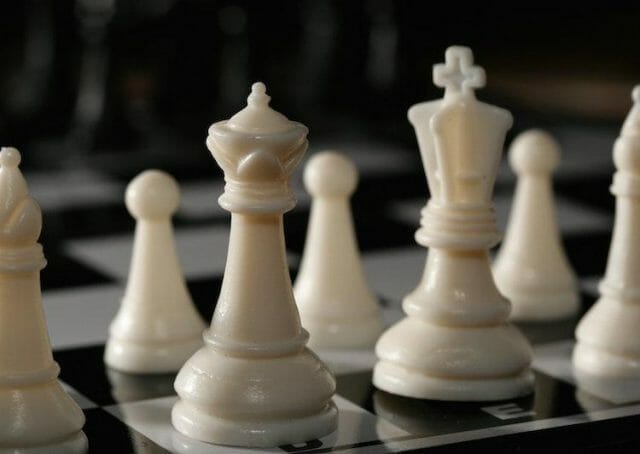 The queen is unequivocally the most powerful and aggressive of chess pieces. Knights trace their little corners, cardinals are bounded to diagonals, and the precious king can move in any direction — but only one square at a time. The queen, on the other hand, can move in straights and diagonals, as far as she wants, kicking ass, taking names, and checking the opponent’s king.

All of which is great for a chess player. But when you stop to think of it in a social or historical context, is a little confusing.

Chess is old. The queen is the only “female” piece in a game whose rules developed at around the 15th Century. Her power, in that case, seems like an anachronism. Back then women were considered politically essential, but only as they were required to produce a male heir. When females were allowed primary possession of the throne — queens regnant, not queens consort — it was usually in spite of fervent popular protest that women were unfit to rule. Women were considered inherently weaker than men, and it was thought that female monarchs just didn’t have the right stuff.

In the words of John Knox, a Protestant reformer, “nature…doth paint them forth to be weak, frail, impatient, feeble, and foolish.” “Over the 16th-20th centuries,” economists Oeindrila Dube and S.P. Harish explain in a recent paper, “European wars were frequent and carried out with the aim of acquiring more resources and territory.” In such an era, the ideal ruler was thought to be cunning, assertive, and aggressive: a man of war, thus a man.

It turns out that by not allowing queens to succeed, royal families could have been missing out.

This was a more complicated study than you might think. The researchers couldn’t just look at the military record of states ruled by queens and compare them to states ruled by kings. It was very possible that queens were more likely to be allowed the throne in times of peace. (Because women were perceived as “weak,” a monarch and a royal society might have worked harder to produce or discover a male heir in times of war.) And even if female monarchs tended to have peaceful reins, a male in the same time and place might have done the same.

Female monarchs are a pretty small and strange population, not to mention most of them died hundreds of years ago. It’s pretty much impossible to run a controlled experiment on female monarchs’ tendencies towards warfare. But modern statisticians have tools to find suggestive evidence, even when controlled experiments are impossible. Instrumental variables are one such tool.

An example of an instrumental variable, via Leigh and Schembri

One example of where instrumental variables come in handy is when analyzing smoking’s effect on certain health outcomes. But there are a lot of factors that affect whether someone smokes or not, and some of those factors might have a direct impact on health, independent from smoking. It’s challenging and expensive to randomly assign people to smoke or abstain from smoking over a very long period of time. But cigarette price in a community affects the amount that people in that community smoke: higher prices result in less smoking, on average. And, as the authors of a study on the matter observe, “the price of cigarettes would not appear to be logically directly related to an individual’s health. The only logical relation would be an indirect one: price affects cigarette use that, in turn, affects health.” A positive correlation between the price of cigarettes and health effects would provide evidence that smoking is bad for your health.

In the queen study, researchers were interested in the effect of queens on war. But, as we have discussed, whether a kingdom was at war or peace might have influenced whether a female was allowed to take the throne in the first place. 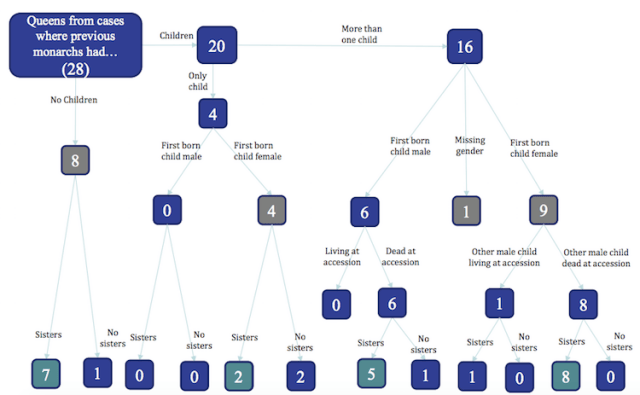 The various paths to queenship, Dube and Harish

The study’s instrumental variables come from the draconian rules of monarchical succession. According to the laws of primogeniture, queens mainly take the throne in two ways: (1) either they are the eldest or only daughter of the reigning monarch, and they either have no male siblings, or their siblings are deceased, or (2) they are sibling to the reigning monarch, who has no living offspring.

From this we get two variables, correlated to queenship, but unrelated to the state of conflict in the kingdom: queenship is correlated by the previous monarch failing have a male as their firstborn child, or by that monarch having a female sibling.

Although there were cases in which these conditions did not result in the next monarch being a queen, the researchers identified no other way for these variables to otherwise impact the frequency of conflict in the next monarch’s reign. (They control for several other variables to make sure this is the case. “We control for the total number of siblings among previous monarchs,” the researchers write, “which may be correlated with the presence of a sister and affect wars over succession in the previous reign.”)

The researchers found that queens were less peaceful than their contemporaries might have assumed. As they write:

Honey, Let’s Rule the World Together 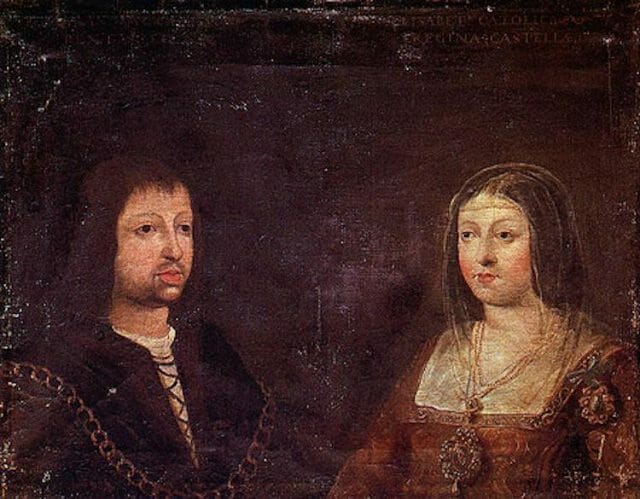 Isabella and Ferdinand — 15th Century power couple. These guys were in charge while Spain conquered the New World (Wikipedia)

It turns out that solo queens were more likely to be attacked than other solo monarchs. With the popular perception of women at the time, there’s no mystery there — having a queen regnant made a country seem vulnerable.

But the case of married queens presented an enigma: compared to married kings, married queens were more likely to participate in conflicts in which they were the attacker.

It doesn’t seem that these queens were waging war merely as a means of “posturing” strength. “If this is true, we should observe a larger effects early in the reign,” the researchers write, “when it would be most valuable to send this signal.” They also observe that, “the effects are also not any larger for younger monarchs, which suggests that influential foreign ministers did not dominate war making decisions.”

“Female reigns may have had higher capacity to carry out war since queens often put their spouses in charge of official state matters. This division of labor would then have freed up time and resources for queens to pursue more aggressive war policies. In contrast, kings typically were less inclined to put their spouses in official positions through which they could aid in managing the polity.”

Unlike a king, a queen could send her spouse to command the military, while she simultaneously managed affairs at home, and raised capital to fund the campaign.

Some historians claim that the power of the chess queen was inspired by some notably powerful, contemporary, real-world monarchs. Eleanor of Aquitaine and Blanche de Castile both used their positions as Queen consort to act as powerful statesmen at home while their spouses were at war. Queen Isabella de Castile, aided by her husband Ferdinand, was an accomplished military strategist, and even appeared on the battlefield herself, in armor.

This research into the recently discovered “queen effect” suggests that women like this were the rule, not the exception.

Our next post is about the geographic trends of the black American Great Migration, linking today’s urban communities to the mass exodus from the South between 1910 – 1970. To get notified when we post it →  join our email list.