The Motivating Power Of Teams 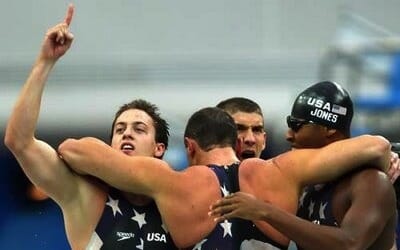 During the 2008 Summer Olympics, American swimmer Michael Phelps’s bid to win a record breaking 8 gold medals was in peril. In the finals of the men’s 4×100 relay, the French team had a sizeable lead as the last swimmers entered the pool. Phelps had led off, so he could only watch his teammate Mark Lezak dive into the pool in pursuit of the French swimmer.

Lezak was the oldest man on the American swim team – the dependable anchor to Phelps’s lightning leg as leadoff. The Americans had hoped to leave him with a lead. Now he needed to chase down France’s Alain Bernard, the world record holder in the event.

Inexplicably, Lezak began gaining on Bernard. When they touched the wall and turned for the home stretch, Lezak was a body length behind. With 25 meters to go – half a body length. In their last stroke, Lezak and Bernard touched for the wall as one. Everyone looked to the clock to see who had won.

Lezak’s performance in the race is almost impossible to fathom. “I had more adrenaline going than I’ve ever had in my life,” Lezak told reporters after the event.

But what motivated his superhuman efforts? Was it the lure of a gold medal in his last major Olympics? The hope that Michael Phelps might share some of his sponsorship money with the man who saved his gold medal run? The determination not to let down his teammates?

The answer seems to be a desire to help his teammates. Research on relays in the 2008 Olympics found that Lezak’s performance was only the most dramatic example of a clear trend. Swimmers in the first leg of a relay rarely outperformed their times in solo events, while swimmers in subsequent legs of the relay, particularly the anchors like Lezak, beat their times in solo events. This suggests that swimmers perform better when they feel indispensable to the success of a team than they do when racing merely for personal glory.

The Motivating Power of Teams

The motivating power of teams extends beyond the realm of Olympians into organizations and businesses.

Adam Grant is one of the biggest names in organizational psychology – a field looking at how to motivate workers and increase productivity. The premise of much of his work is that “The greatest untapped source of motivation is a sense of service to others; focusing on the contribution of our work to other people’s lives has the potential to make us more productive than thinking about helping ourselves.”

Some of his most powerful results show how people can be motivated to work more productively by seeing how their work helps others. In one study, students in a university call center heard briefly from students who described how they benefitted from the scholarships funded by the student employees’ fundraising. The results were impressive: after hearing from students who benefitted from their work, the student employees spent 142% more time on the phone and brought in 171% more revenue.

But in fields where employees’ work doesn’t have a charitable or public-interest aspect, Grant’s work also shows how workers can be motivated by the desire to help fellow employees. The New York Times describes one of Grant’s experiments:

Take, for example, Grant’s study of workers at Borders who contributed to an employee-beneficiary fund managed by the staff, with Borders matching donated funds. The money was set aside for employees in need — someone facing a pregnancy that would put a strain on their finances, for example, or the funeral of a loved one. Interestingly, Grant found that it was not the beneficiaries who showed the most significant increase in their commitment to Borders; it was the donors, even those who gave just a few dollars a week. Through interviews and questionnaires, Grant determined that “as a result of gratitude to the company for the opportunity to affirm a valued aspect of their identities, they developed stronger affective commitment to the company.”

This author has inefficiently spent time getting little of his own work done only to jump at the chance to help a co-worker. Once motivated by the knowledge of the co-worker’s need for help, working productively became easy.

Grant’s research suggests that this desire to help co-workers is very powerful. Not everyone’s job will help save the world, but everyone can help a co-worker. In Grant’s words: “In corporate America, people do sometimes feel that the work they do isn’t meaningful. And contributing to co-workers can be a substitute for that.”

Moments like Jason Lezak’s record breaking race are rare. But the secret behind his herculean effort is simple and accessible to all – the desire to help a teammate.