A few weeks back, we crunched some interesting numbers put out by an Atlantic editor on the finances of online journalism. He cited them in response to controversy over their attempt to solicit work from a journalist at no pay. With a bit of extrapolation, we were able to put together this graph showing why The Atlantic can’t afford to pay its online contributors a decent, $1 a word salary: 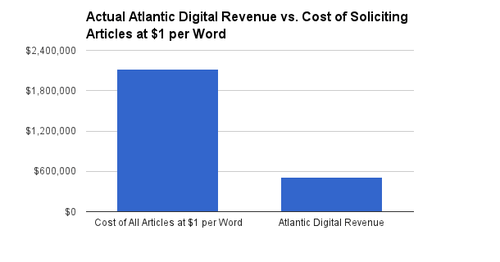 We patted ourselves on the back for driving a nail of our own into journalism’s coffin. But we could not claim to have made an authoritative statement on the challenge journalism faces.

Today The Atlantic, drawing from a report by Pew, published what may be the most effective demonstration of journalism’s inability to adapt to digital. Newspapers have been trying to bolster their online advertising numbers, but it hasn’t come close to replacing the revenue lost from falling print ads: 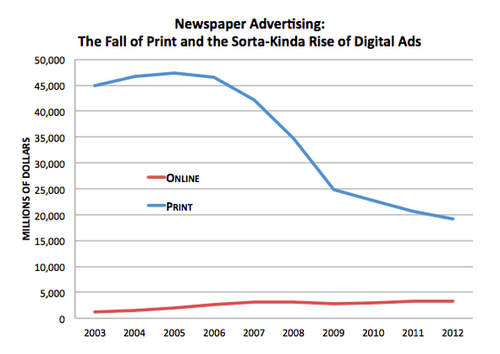 How big is the gap? In The Atlantic’s words:

“Since 2003, print ads have fallen from $45 billion to $19 billion. Online ads have only grown from $1.2 to $3.3 billion. Stop and think about that gap. The total ten-year increase in digital advertising isn’t even enough to overcome the average single-year decline in print ads since 2003.”

That means that newspapers have a $26 billion dollar gap in advertising revenue to make up. In ten years, they’ve made up only $2.1 billion of it, and the gap increases every year. That’s why newspapers’ employment numbers look like this: 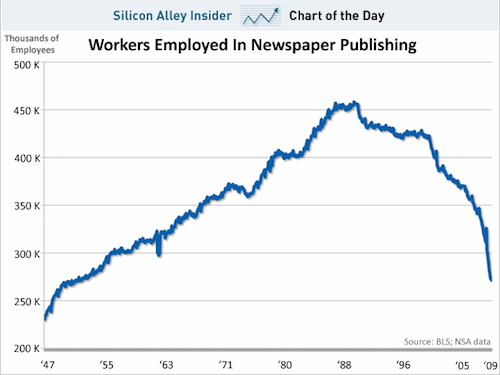 The decrease in employees also probably would be great if reporters stopped working longer hours to try and keep the ship afloat. As noted by a former reporter in a good post entitled “Why I Left News”:

“There was never such a thing as an eight-hour workday at newspapers, but overtime became the stuff of legend. You knew better than to demand fair compensation. If any agency that a newspaper covered had refused to pay employees for their time, the front-page headlines wouldn’t cease. But when it came to watching out for themselves, the watchdogs kept their heads down.”

Consider this a reminder to all you entrepreneurial, hacker-types that read our blog. The newspaper is a multibillion dollar problem in need of a solution. And doing so might actually change the world.