Online Dating and the Death of the ‘Mixed-Attractiveness’ Couple 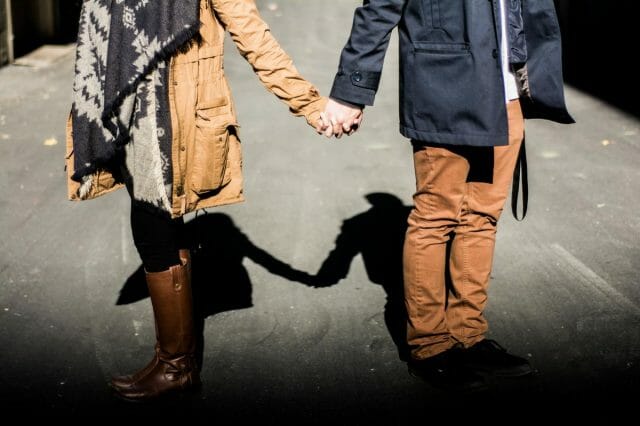 This article was written by Alex Mayyasi, a Priceonomics staff writer

When was the last time you met a couple where one person was attractive and the other was not?

There’s no reason couples like that should stand out—except for the fact that they are so rare. Seeing it can set off an uncharitable search for an explanation. Is the plain one rich or funny? Is the attractive one boring or unintelligent?

While love-seeking singles speak of this dynamic through euphemisms like “she’s out of my league”, economists and psychologists have dismally documented it.

“We think we have highly idiosyncratic preferences,” psychologist Paul Eastwick has said of dating, “but there’s just no compelling evidence that those preferences [matter] once people actually meet face-to-face.” Experiments run by OKCupid, a dating site that matches singles by asking them which qualities they care about in a partner, support this idea.

Instead it’s well established among academics interested in dating that “opposites attract” is a myth. Study after study supports the idea of “assortative mating”: the hypothesis that people generally date and marry partners who are like them in terms of social class, educational background, race, personality, and, of course, attractiveness.

There is an exception, however, to this seeming rule that people always date equally attractive people: The longer two people know each other before they start dating, the more likely it is that a 3 will date a 6, or a 7 will marry a 10.

Which is interesting to think about as dating apps, which match strangers up for dates, take over the dating world. Because if more and more people meet their future spouse on a first date, the mixed-attractiveness couple might just go extinct.

The Merits of the Friend Zone

This dynamic interested Lucy Hunt, a researcher at the University of Texas at Austin, who decided to investigate “how time might affect how similarly attractive couple members are to one another.”

Working with two psychologists, Hunt looked at 167 couples who participated in a long-term study at Northwestern. They asked each couple how long they’d known each other before they started dating, and they recruited people to watch videotapes of the couples and rate each individual’s physical attractiveness.

The researchers speculated that people who had known their partner before they started dating would break the rule of assortative mating. And that’s just what they found. Among couples who met when they started dating, both people were about equally attractive. But among friends-first couples, 3s dated 7s and 5s married 8s. 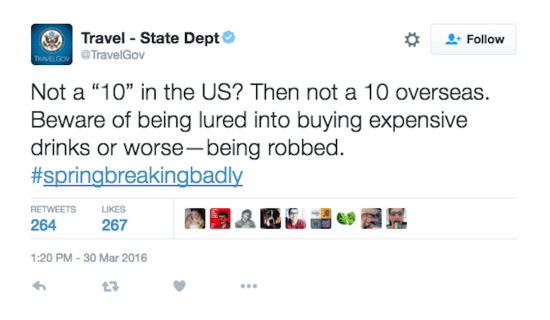 Why is it that people who meet on blind dates match up with equally attractive people, while friends form mixed-attractiveness couples?

Do acquaintances overlook physical appearance because they know each other’s personality and unique attributes? Is dating less of a “competitive market” when it’s among friends rather than at a bar or a house party?

It’s an open question, but the same group of researchers have an intriguing insight from an exercise they performed with students at UT Austin.

At the start of the semester, they asked students in small classes to rate the desirability of their classmates. (Desirability could incorporate non-physical attributes as well as good looks.) When the researchers looked at the ratings, they found that most students agreed on who was hot and who was not.

Three months later, though, the researchers asked the same students to rate their classmates again. Lo and behold, many of the ratings had changed: the students’ opinions of who was datable had been informed by time together in class. Over time, personality had more of an impact on how desirable someone was.

More importantly, the students no longer agreed. Their rankings reflected their personal preferences about the non-physical attributes of the other people in the class. Where one classmate might find a student’s earnestness in class endearing, another might dislike it.

“Perceptions of mate value change the more time that people spend together,” Lucy Hunt has said of the result, adding, “Maybe it’s the case that beauty is partially in the eye of the beholder, especially as time passes.”

If that’s the case, it doesn’t seem like beauty is in the eye of the beholder for online daters. Because like the couples in the study that were equally attractive, they never know their matches before they start dating.

In fact, many online dating services facilitate assortative matching. It’s a feature of their matching algorithms, which match people of equal desirability.

The swipe-left, swipe-right dating app Tinder, for example, is known for making matches based on an internal attractiveness ranking it calculates for each of its users. As Sean Rad, the founder of Tinder, has explained to Fast Company, Tinder calls each user’s ranking his or her “elo score.” The term comes from the world of professional chess, where elo scores are used to rank players. If an average player beats a grandmaster, her score increases significantly. If a great player loses to an even better player, his elo score only drops a few points.

On Tinder, the chess matches are users indicating whether they want to go on a date with each other, and users’ scores go up or down depending on how highly ranked they are. As one journalist put it, the system looks a lot like “a definitive scoring of our attractiveness, a supercharged Hot or Not-style algorithm.”

Rad stresses that the elo score rates “desirability,” which incorporates more than attractiveness. Yet the app clearly uses elo scores to match equally datable people. Rad has said that he can ballpark someone’s elo score just by looking at pictures of the matches served up by Tinder’s algorithm.

Tinder’s approach is not unique. The founders of the Dating Ring, a service profiled by the podcast “Startup”, have talked about ranking users’ attractiveness from one to ten to match them up. “Studies show that people tend to date people of similar levels of attractiveness, and our whole goal is to try to increase the probability that two people will meet up,” Dating Ring CEO Lauren Kay told the hosts of Startup. “We match people within one attractiveness point.” 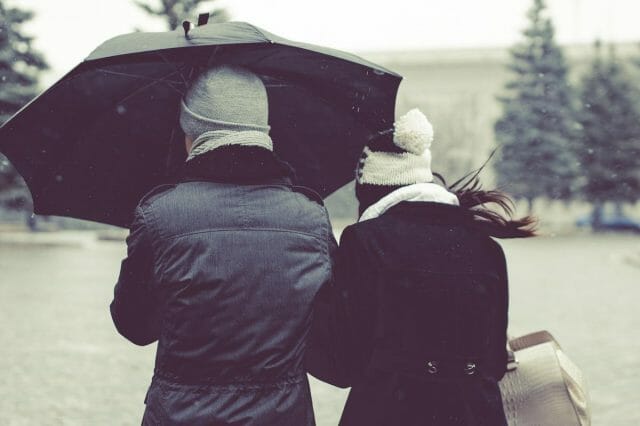 But when we asked Justin McLeod, the CEO of the dating app Hinge, he said that they track attractiveness—but don’t use it as the metric for matching people up.

Hinge’s algorithm, which McLeod says is being redesigned, uses two types of filtering to match users who are likely to like each other.

One filter uses the same logic as Amazon’s recommendation engine: The same way that Amazon suggests that you buy books that have been purchased by customers’ with a similar purchase history, Hinge shows you the profiles of singles who have been “liked” by users who swipe right on the same profiles as you.

The algorithm uses both filters to predict whether users are likely to like each other, and unlike with Tinder, attractiveness does not play a starring role. “While we do find that attractiveness is correlated, it’s not hugely predictive,” McLeod says. “People have different tastes.”

This seems like a sign that online dating has more individuality than matching up equally attractive people. But there’s an important qualification—at least among hetero couples.

“Well, women have individual [preferences],” says McLeod. “Men kind of do agree on what’s attractive and what’s not.”

The rise of online dating has provided a lot of hard data that documents how we date and what we desire. Some of the revelations are hard truths. Dating Site OKCupid, for example, has shown that its users routinely rate members of their own race as more attractive.

In this case, the data is clear that men’s preferences are much more homogenous than women’s. “There are women who 95% of men say yes to, and there’s nothing like that for men,” says McLeod. “A man is really attractive if 40% of women say yes.”

The intriguing insight here? Among heterosexual couples, men are the ones driving assortative mating—and the fact that mixed-attractiveness couples are rare.

If you’re single and in the dating market, you might be wondering why this matters.

After all, it’s not like mixed-attractiveness couples are a force for good—like couples who cross racial lines, or pre-suicide Romeo and Juliet.

Well, this dynamic is definitely relevant—even if you don’t use online dating—because it’s becoming more rare for Americans to marry partners they knew before they started dating. As the below chart shows, meeting strangers through a dating app or at a bar is replacing contexts like school, church, and work. 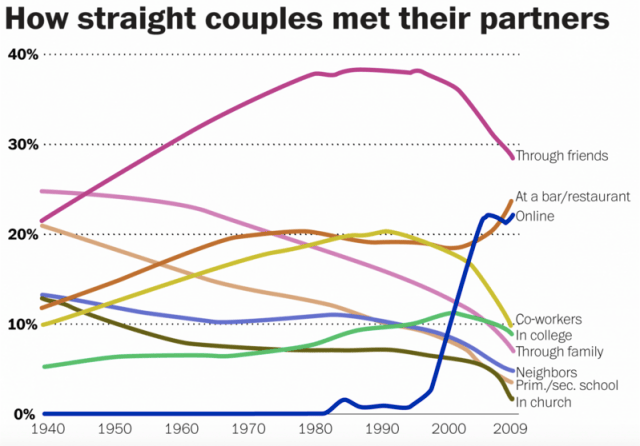 Source: “Searching for a Mate” by Michael Rosenfeld and Reuben Thomas; hat tip to Wonkblog

Americans increasingly marry someone they met on a first date rather than a high school sweetheart. And that can make the dating market a more brutal and competitive process.

To understand why, imagine four college graduates moving into a new apartment. They have to decide who gets which room, and all of them want the master bedroom. They all have the same second and third choice too. As a result, the matching process is zero-sum.

Now imagine the same four friends moving into a different apartment. This apartment has a room in the basement that 3 of the friends hate, but that one person loves because it has its own bathroom. And only one friend wants the master bedroom, because it’s on the 3rd floor. Since everyone has their own preferences, choosing rooms is easy and win-win.

This is the difference between dating in a context where people know each other (like the UT Austin students at the end of the semester) and where they don’t (at the start of the semester). In a dating market of strangers, they agree more on who is most datable, so they compete and settle. When people know each other, the situation is more win-win, because they develop their own preferences and disagree on who is most desirable. 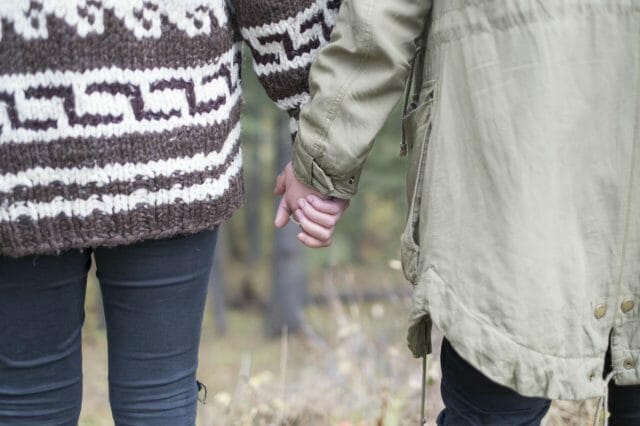 But the ultimate question is whether mixed attractiveness couples are any more or less happy. Does matching based on more individual preferences result in better functioning couples? Or does the mismatch in how everyone else perceives their desirability lead to trouble down the road?

Researchers’ conclusions make a mockery of all the time we spend worrying about appearances.

Some have found statistical evidence that it matters; others have used the same methods of surveying couples to find the opposite.

Overall, there’s no strong evidence that the attractiveness of your spouse—or how evenly matched you are—has any impact on whether you’ll be happy together.

If online dating kills the mixed-attractiveness couple, we might not miss it.