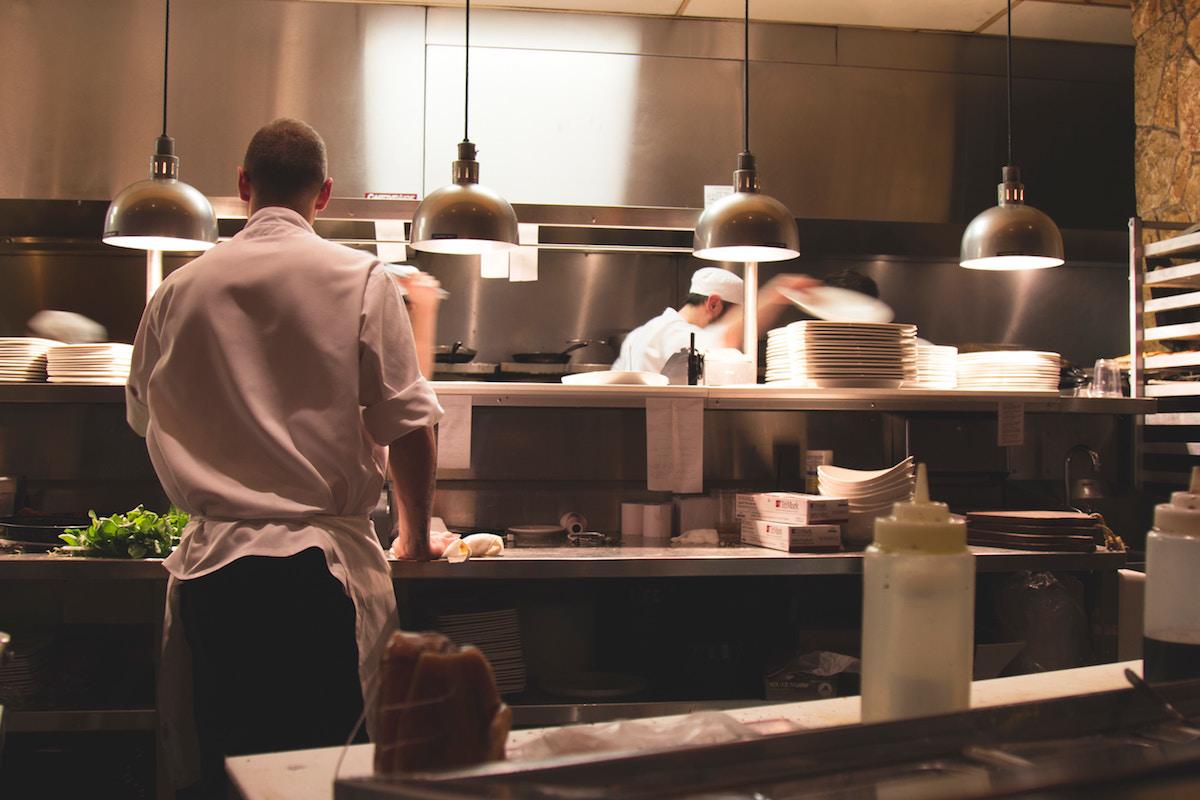 Employee turnover is an expensive problem, and business owners with small teams can feel the pinch the most. Not only does your business pause when an employee leaves, but you also have to spend valuable time finding that person’s replacement.

Gusto is the employee system of record for more than 100,000 small businesses across the US. We recently conducted a study to better understand why employees leave for voluntary and involuntary reasons. Here’s what we found.

The three drivers of employee turnover

Across the Gusto employer base, the average company has a 32% turnover rate per year. In other words, 32% of employees quit or are terminated every year. At a 20-person business where everyone earns $50,000 a year, that 32% turnover rate can cost nearly $100,000 a year.*

In our analysis, we found that three drivers were shown to be the most predictive of turnover at small businesses: 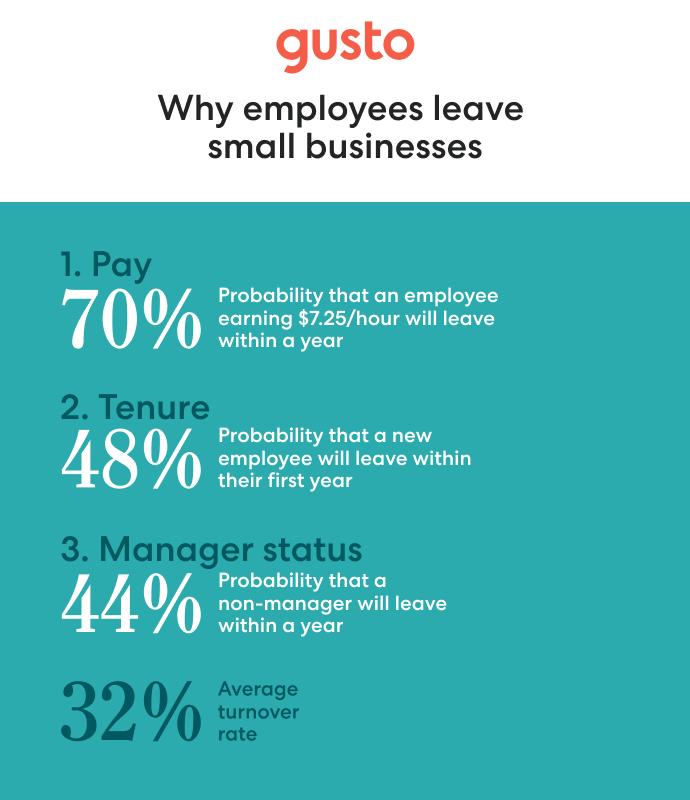 For this analysis, we focused on hourly employees since that’s where we saw the real differences emerge. Among this group of employees, how does their chance of leaving change with different pay rates? 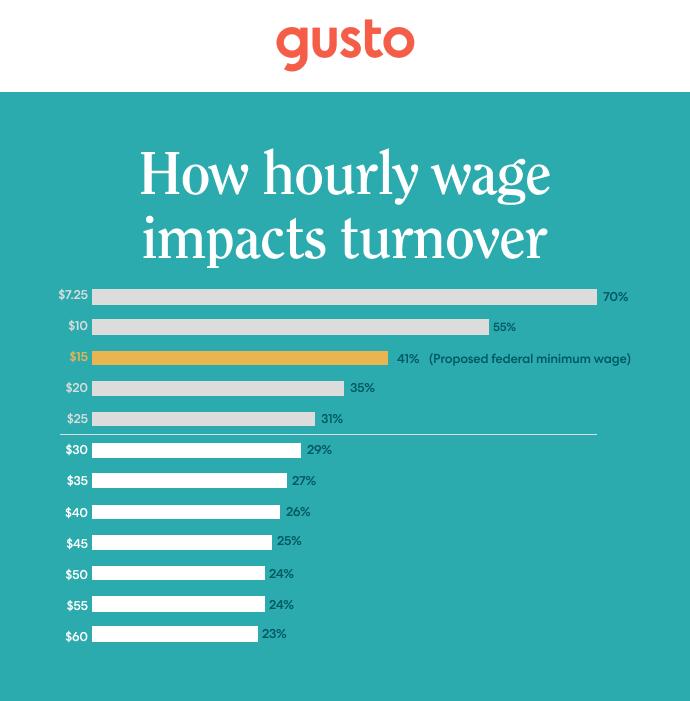 An employee making the current federal minimum wage of $7.25 an hour has a 70% chance of leaving within a year, which is more than double the average turnover rate of 32%. It’s also nearly double the average turnover rate (41%) of someone earning $15 an hour (the new proposed federal minimum wage outlined in the Raise the Wage Act).

Takeaway: Pay becomes less of a contributing factor to turnover at around $25/hour.

The chart below shows the average turnover rate by an employee’s tenure: 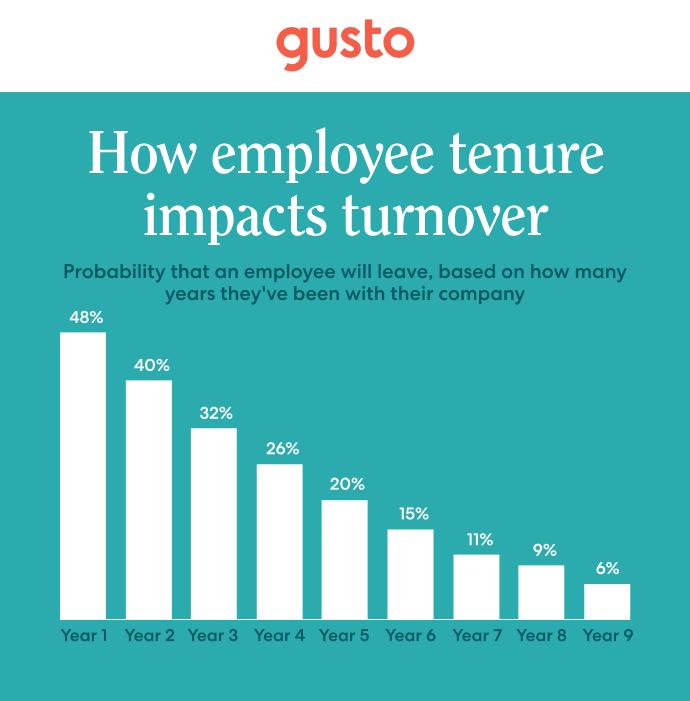 Nearly half of new hires leave a business within their first year. That number drops to 40% in year two, and by the third year, it’s reduced to 32%.

Are employees with direct reports more or less likely to leave than those who don’t manage anyone?

The following chart shows the turnover rates of three types of employees: 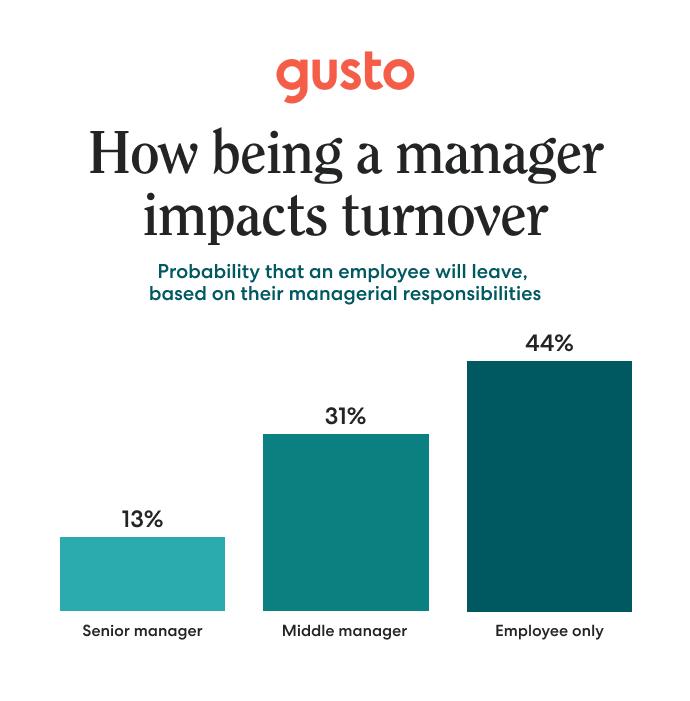 We found a strong correlation between management responsibilities and turnover. A senior manager has just a 13% turnover rate, compared to an employee without any direct reports, who is over three times more likely to leave.

Even after controlling for factors like salary and tenure, people who manage others are still more likely to stay. One theory is that senior managers are usually more invested in the team and the future of the business—which can make it harder to leave.

Takeaway: The data strongly indicate that managerial responsibilities are correlated with someone’s chance of leaving.

Three strategies that can prevent employee turnover at small businesses

Any action plan for companies that are serious about minimizing turnover should include the following:

The more you pay your employees, the lower your turnover rate—until a certain point. This finding is particularly important if you have employees with hourly rates of $25 and below. After that benchmark rate, additional compensation results in only a slightly lower turnover rate.

However, not every business owner can easily bump up their team’s pay.

Here are a few other best practices that can help you prevent employees from leaving because of non-competitive pay:

The first year is a danger zone. During this timeframe, employees leave companies at roughly the same rate at which they stay.

Below are a few resources to help you set up a better onboarding program:

And while you should never take your most tenured employees for granted, it’s nice to know they’re more likely to stay at your business.

This is an opportunity to keep them engaged through career development plans that help them grow, thoughtful promotions and bonuses, and making sure their compensation packages stay competitive.

While we don’t advise giving someone management responsibility before they’re ready, it’s clear that company leaders have some of the lowest turnover rates.

In practice, that means you should be on the lookout for high-potential employees, since an employee with managerial responsibility is less likely to leave their current company. Not only does leading others contribute to tenure, but expanding your management team might also help if you’re struggling to keep everyone in flying formation.

Here are a few more suggestions that you can incorporate in your business:

In this analysis, we’ve found that pay, employee tenure, and management responsibility are the three biggest indicators of turnover at small businesses. They’re also three things that business owners can actually do something about.

While the strategies identified in this article aren’t free, they’re still worth considering and experimenting with. Because investing in these areas can be more cost-effective than having your best employee walk out the door for a reason you could have easily fixed.

We looked at anonymized data among tens of thousands of Gusto employers across the United States from a diverse set of industries, geographies, and business sizes. The goal was to see how many employees that were employed at a business on January 1, 2018 left at some point during that year, either for voluntary or involuntary reasons. We were then able to segment the data by tenure, pay, and management responsibility to unpack the circumstances that contribute to employee turnover.

*Based on the Work Institute 2018 Retention Report, which calculated that turnover costs can equal 33% of a person’s salary.