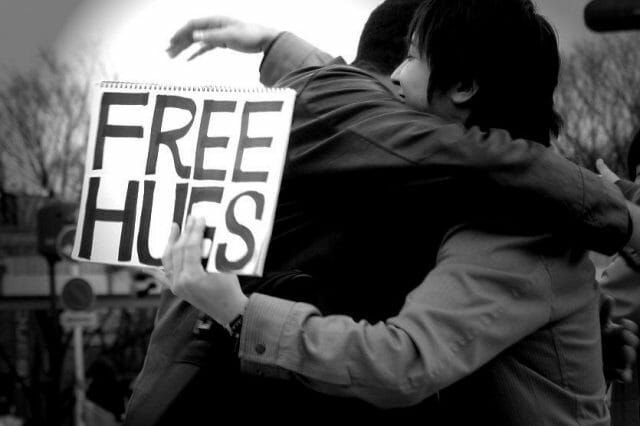 Neoclassical economics assumes that we are rational and that buying is as straightforward as performing a cost-benefit analysis. But when given the option to get something for free and its cost is zero, some fairly wild consumer behavior takes place.

Some time ago, Amazon brought the free shipping idea to Europe. By mistake, though, the price in France was reduced to 1 franc (equivalent to 10 cents) instead of to zero. While the European countries with free shipping saw a dramatic rise in total orders, not much change occurred in France. Even though they only had to pay an incredibly small amount.

What’s the big deal with 10 more cents? Isn’t the difference so small that it shouldn’t matter? Yet, according to a study by psychologist Dan Ariely, the appeal of “FREE!” is huge: 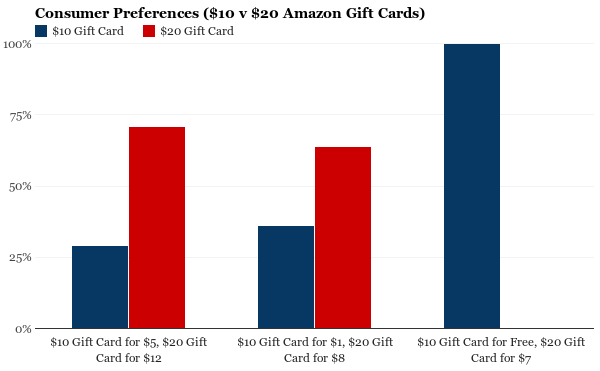 To see how the option of paying nothing affects our decision-making, Ariely presented three groups $10 and $20 Amazon gift cards at discounted prices. Which card would they choose? For the first two groups, the better deal won out. Most bought the $20 card, even as the discounted price on the $10 card went down to $1.

However, the third group was offered the $10 for free. The result? ALL of them chose the free card, even though the alternative was arguably a better deal (paying only $7 for a $20 gift card).

Ariely describes this as the Zero-Price Effect: we think that there’s no downside to “free.”

Elizabeth Kolbert of the New Yorker describes her own unconscious preference for free while shopping on Amazon. At checkout, Amazon prompted her to add $7.00 to the order for free Super Saver shipping. “By the time I was done, I had saved […] $3.99 in shipping charges,” she writes. “Meanwhile, I had cost myself $12.91.”

It’s not just online shoppers who are vulnerable to the Zero-Price Effect. Between the option of Hershey’s for free and a Ferrero Rocher chocolate for 25 cents, 90% chose the free Hershey’s: 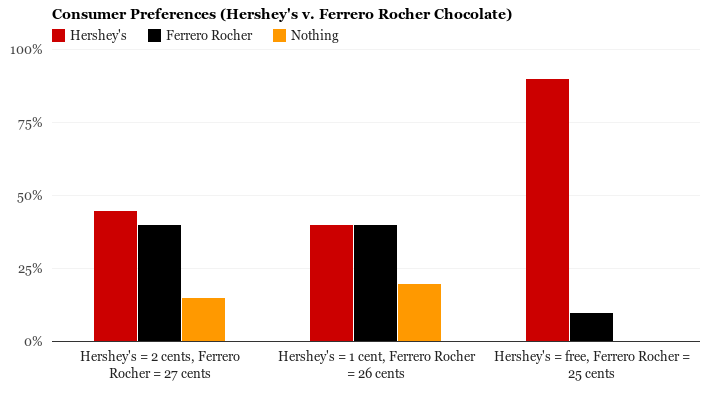 However, when the Hershey’s was 1 cent and the Ferrero Rocher was 26 cents, an equal amount of people chose each. 20% chose nothing! Apparently, 1 cent made all the difference.

Here’s another example involving a survey of people in line for free tattooes at a New York City nightclub: 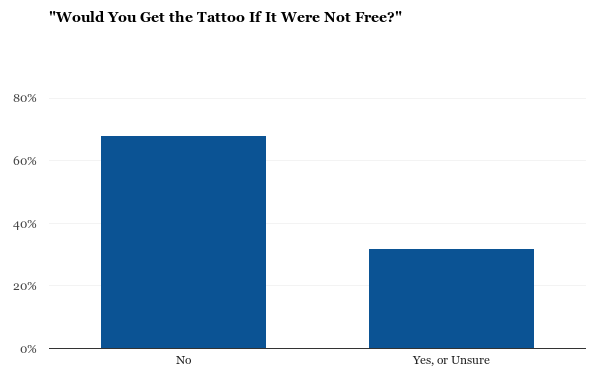 68% of respondents said they wouldn’t be getting the tattoo if they had to pay for it. Yet they found themselves in line for some permanent body ink because it was free.

There is considerable nuance to decision-making at zero cost pricing. And something as innocent as “Free Hugs” can incite suspicion: what do these creepy free-huggers want from us?

While the findings of these studies don’t translate to all circumstances, the power of paying nothing is nonetheless very influential. As Ariely puts it:

“FREE! gives us such an emotional charge that we perceive what is being offered as immensely more valuable than it really is.”

So next time you are offered something for free, think long and hard about whether you actually need a tattoo.