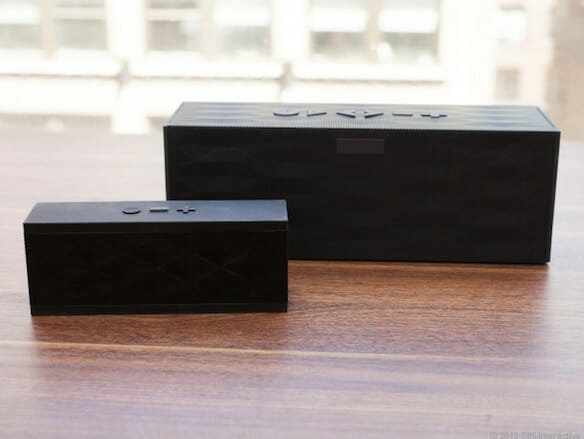 Though the history of portable speakers is somewhat deplorable, there have been some recent developments in design quality as well as versatility and compactness. For this survey, Priceonomics will differentiate between a few of the better performing speaker systems, which will, of necessity, cross over into wireless and idock territory.

One of the first instances of portable speakers came with an amplifier, the Pignose, a product tailored for electric guitarists. As we examine the development of portable speaker technology from the pignose into expandable designer cubes and spheres (and one that simulates a water bottle for a bicycle,) that wirelessly coordinate between music players and iproducts, at least one of which will pause the music for an incoming phone call, we will cover a lot of territory.

Altec-Lansing produced the design standard for the loudspeaker with their 604, a coaxial duplex driver that featured a horn projecting across a woofer to effect a single acoustical point source. That was in 1943. In 1945 they introduced their “Voice of the theatre,” series which became an industry standard.

Fast forward to 2013, and Altec-Lansing manufactures the FX 6021, with two 15-inch tall towers, each loaded with six 1” neodymium speakers and a bass module. It outperforms other comparably-priced ($300) systems (Creative Gigaworks 750s), provides 104 dB of output and looks cool with a flat-screen monitor. It should be mentioned that this is a powered speaker system.

Harman-Kardon makes the SoundSticks II ($170) which get a few negative reviews for no auxiliary inputs and no remote, but are considered by many, including PC Mag, to be the premium 2.1 channel speaker system. Where the SoundSticks II speakers excel is in bass response, a determining factor that can be found lacking in every inexpensive speaker system. This is a common criticism of the lower-end Altecs, such as the Expressionist, Expressionist Bass and Orbit series. The SoundSticks also look cool, with clear space-age amorphous shapes that light up in blue. These are powered speakers.

The Bose Soundlink is a battery-powered wireless module with impressive bass response ($415). It uses a dongle-transmitter that plugs into a PC or Mac USB port, and synchs with itunes, with the potential to broadcast 60 feet.

Rarely to be outdone in performance, appearance or cost, the Bang and Olufsen Beolit 12 ($960) provides 8 hours of battery-powered listening that employs Apple AirPlay technology and resembles their transistor radios from the 1960s.

The Jawbone Jambox ($255) combines Bluetooth technology to coordinate phone calls with a streaming player, fading the music down when a call comes in. It combines wireless proprietary woofer and tweeter designs with a moving-wall bass radiator.

The Wowee I ($60) earns a gold star for creativity, using its small size to telegraph vibrations into a surface with some mass, like a desktop, which actually resonates with the bass frequencies. It is battery-powered, has a USB port for charging and boasts 20 hours of operation on a charge. It requires a wire from your idevice. The X-Mini II Capsule Speaker ($30) is a small sphere that accordions out to reveal a USB port and a slot for a mini SD card, as well as a 3.5mm input jack. It will run 11 hours on a charge. It is rated above the performance of the Wowee 1 by Tech Radar.

The Cycling Speaker MB S-100 ($65) garners a unique position in our review, by pretending to be a water bottle for a bicycle. Despite its novelty aspect, it delivers good MP3 and WMA playback performance. It operates on a rechargeable battery and features an FM radio for your convenience. Apparently it is still only available in China but will soon be on shelves in the U.S.