Public Bike Sharing: Analyzing the Usage Data in US Cities 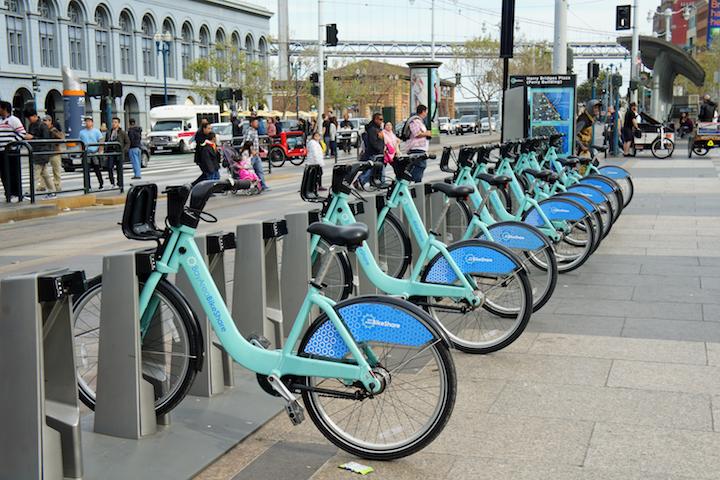 In early 2001, the mayor of Paris, Bertrand Delanoë, faced a dilemma: he wanted to make his city more sustainable by encouraging people to ride bicycles — but residents didn’t have room to store them in their apartments, and didn’t feel safe parking them on the street.

So, Delanoë integrated a bikeshare program: a system where people could rent bikes and ride them between a network of stations throughout the city. Though it wasn’t the first such effort in history, it was the catalyst for an international bikesharing revolution.

In the past decade, more than 600 cities around the world have implemented similar plans, collectively deploying more than 700,000 bicycles. 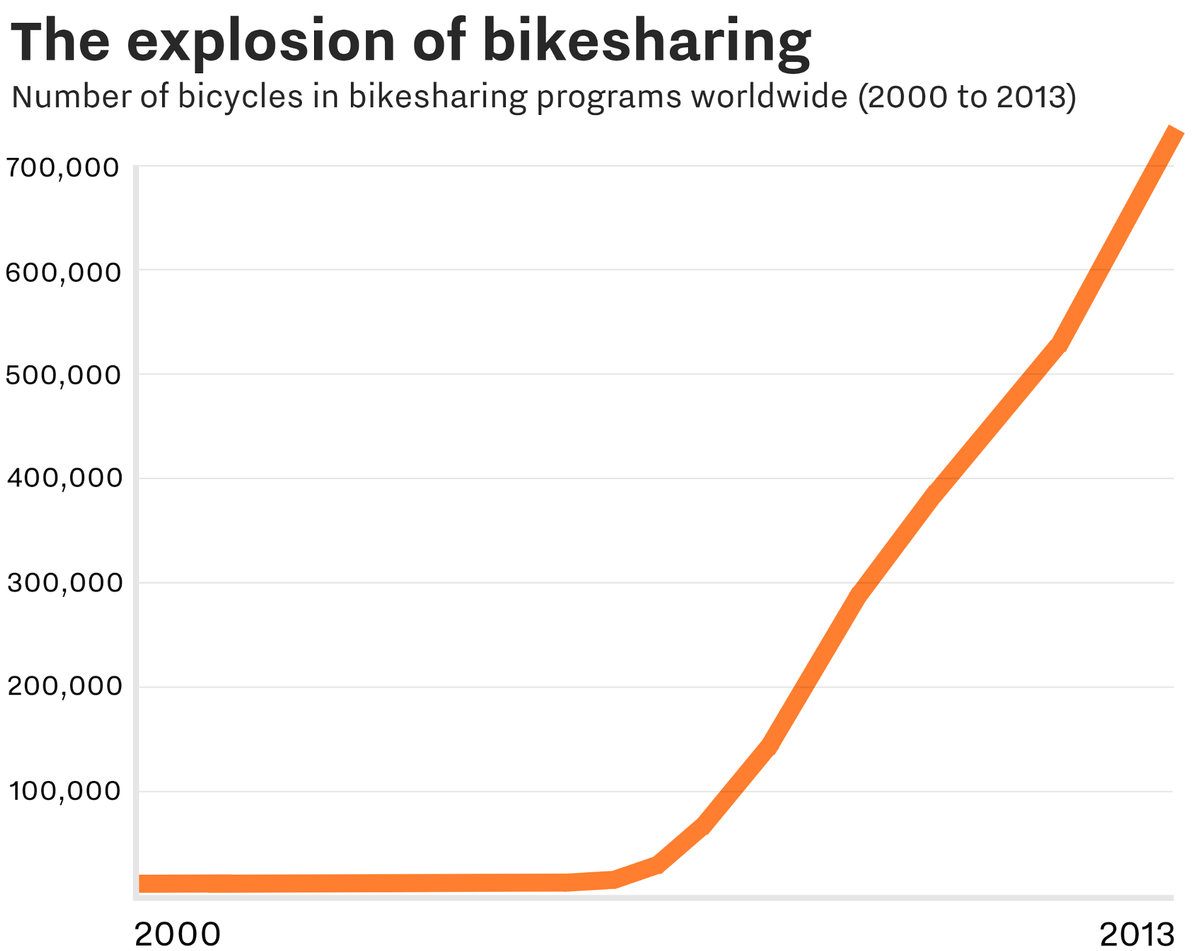 But not all bike sharing systems are created equally.

We decided to analzed data collected by Priceonomics customer Spin, a bikesharing startup. So, we compiled a year’s worth of ride data (10/01/2015 to 09/30/2016) from six major cities: New York City; Washington, DC; Boston; Seattle; Chicago; and San Francisco.

San Francisco is often thought of as a bicycle mecca. But when it comes to bikesharing, so far the city lags behind other successful systems on key metrics.

The first thing we wanted to take a look at was the number of bicycles and stations per city, in relation to each city’s population.

In raw numbers, New York City’s Citi Bike system has the largest number of bikes in operation (a whopping 10,000). Seattle’s Pronto network (soon to be shuttered), at 500, has the least bikes of the cities we analyzed. Calculating per 1,000 capita, San Francisco’s Bay Area Bike Share (1,030 bikes), falls far behind comparable cities. 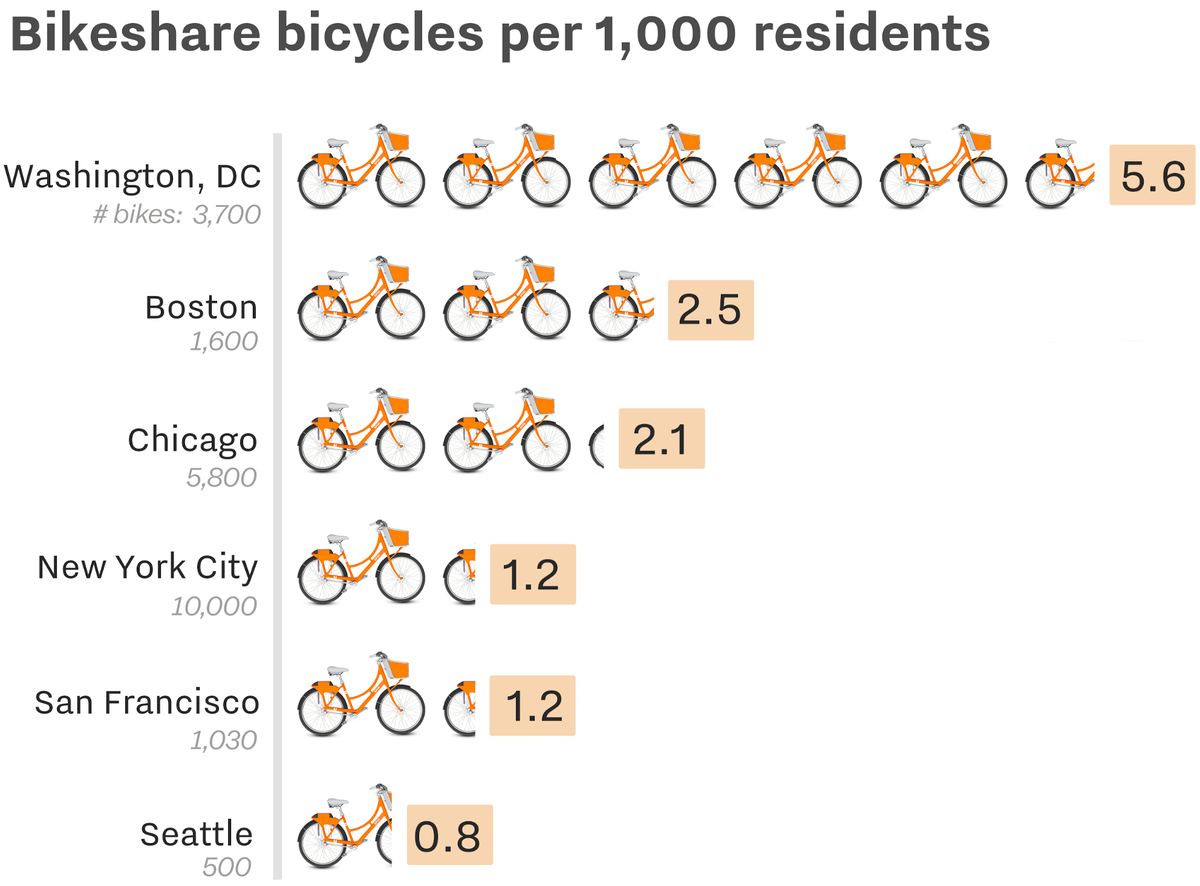 Washington, DC’s Capital Bikeshare — with an impressive 5.6 bicycles per 1,000 capita — far surpasses systems in the other US cities we analyzed. Launched in 2008 with 10 stations and 120 bicycles, Capital Bikeshare has since expanded 40 times in size. It was the first large-scale bikesharing operation in the US — and today, is considered the country’s most successful.

When it comes to stations per square mile, DC takes the cake again, handily beating out Chicago, Boston, and New York City. 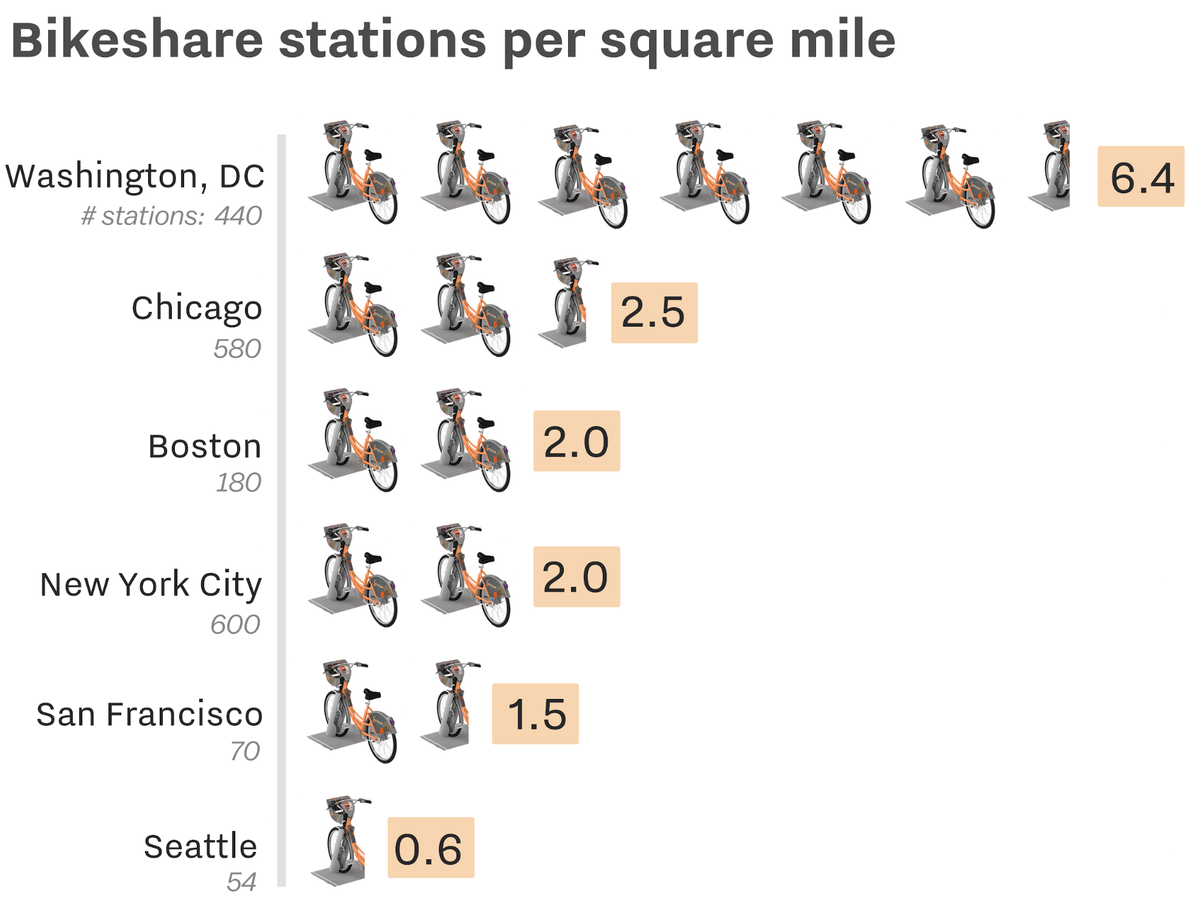 While DC boasts 6.4 stations per square mile, San Francisco clocks in at just 1.5. Save for Seattle (which has a much less ambitious bikesharing economy), San Francisco has the least amount of stations among the cities we looked at, with 70 spread across its 46.87 square miles.

Next, we sifted through millions of rows — 20 gigabytes worth — of individual ride data, and averaged out daily rides between October 2015 and September 2016 for each city.

Far and away, New York City’s system saw the most daily usage, with 3.6 daily rides per bicycle. 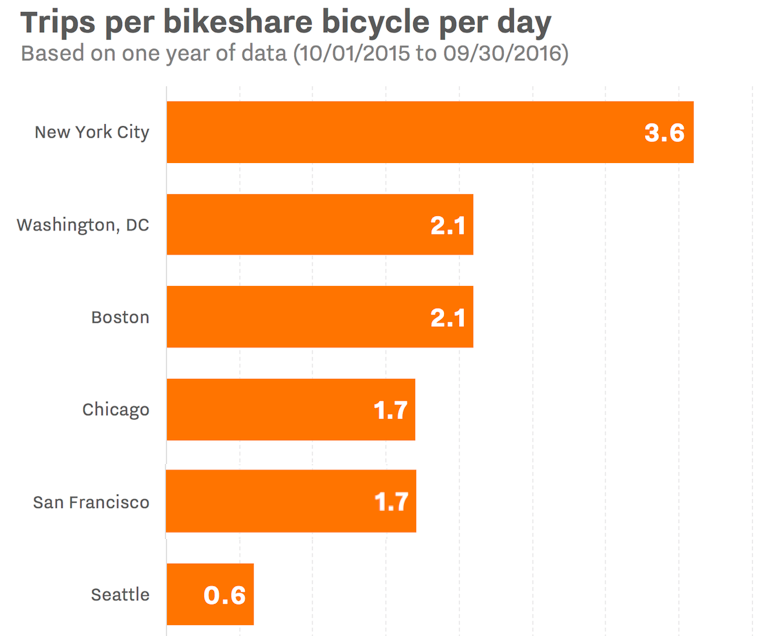 Note: An earlier version of this chart had San Francisco at 0.8 trips per day, but that figure excluded non-subscriber riders. That number has been updated to 1.7 trips per day. Source: Spin

San Francisco’s showing is poor relative to New York: each of the city’s bikes sees 1.7 trips, on average.

But to get a true picture of usage, we also had to calculate average time per ride. Using time stamp data for individual rides, we found that Boston’s Hubway users have the longest rentals, at an average of 23 minutes and 32 seconds. 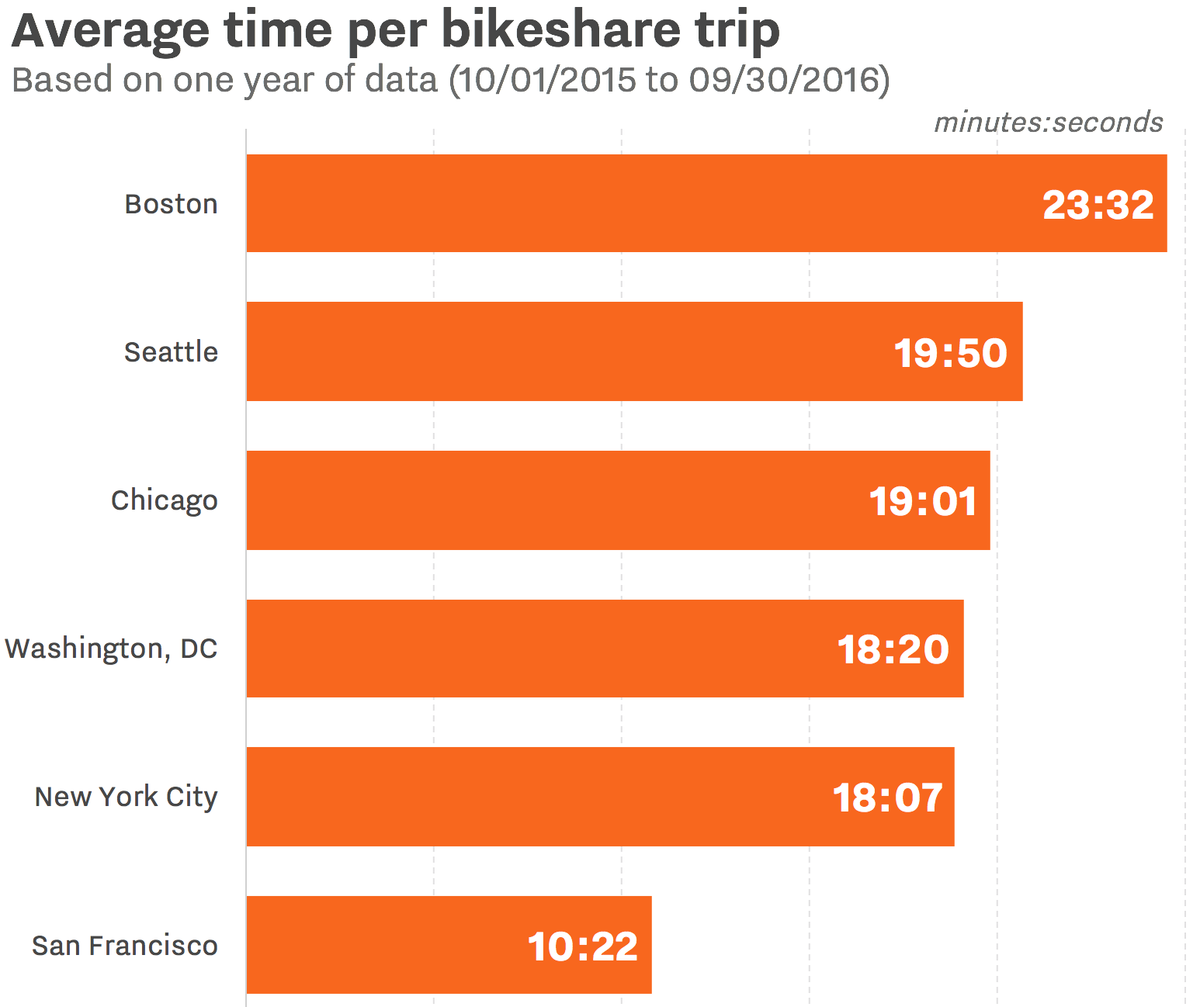 San Francisco’s Bay Area Bike Share ranks last here — and not by a close margin. At less than 10.5 minutes per ride, it falls 7.5 minutes behind the next closest system, New York’s Citi Bike.

Part of this could be due to the city’s size — it’s the smallest on the list — but there seems to be little correlation between a city’s size and how long each ride is: Boston, at 89.6 square miles, is far smaller than New York City (304), or Chicago (234), yet handily outranks both.

Lastly, an analysis of San Francisco’s most popular station by the hour of the day reveals very few overall rides — even at peak hours. 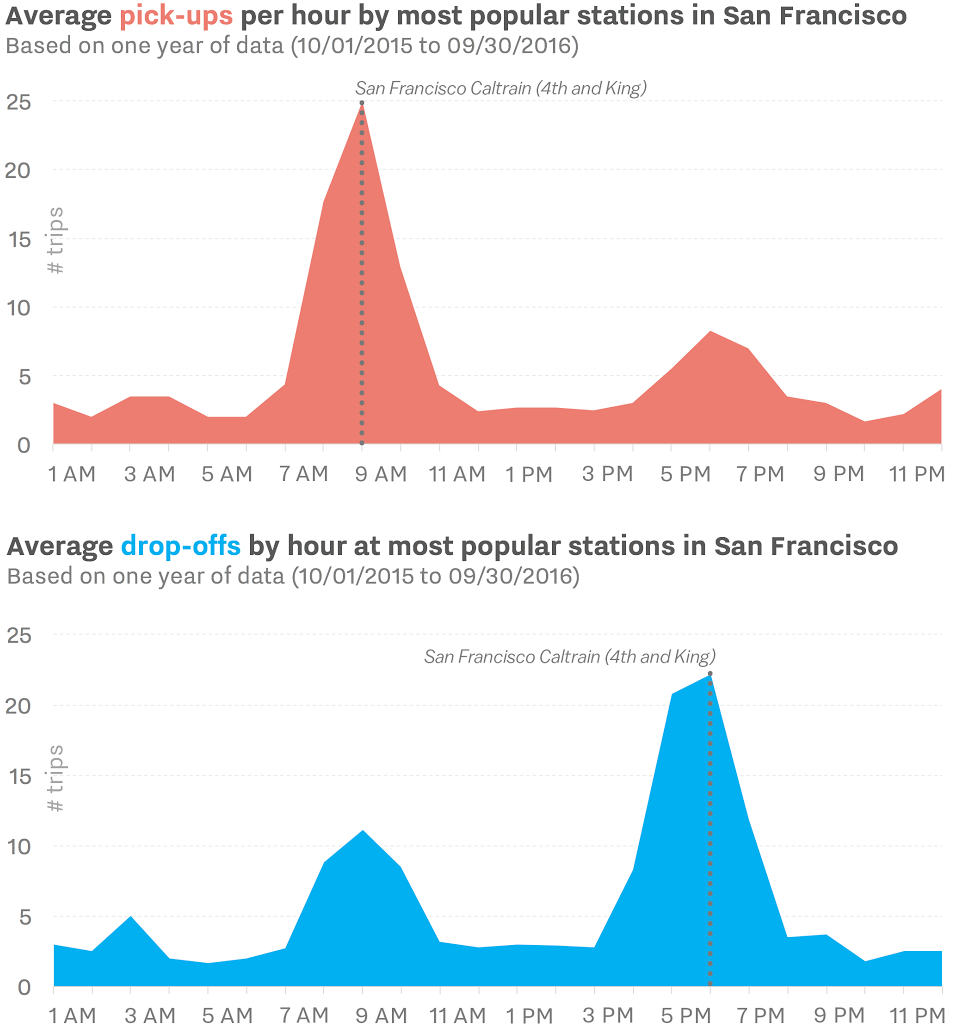 During morning rush hour (9 AM), the most popular station (San Francisco Caltrain, at 4th and King) only sees a peak of 25 pick-ups. At peak afternoon commute time (6 PM), the same station sees even less drop-offs — about 22, on average.

Despite the costing the city $5,000 per bike, San Francisco’s system currently lags other cities  on most metrics in this analysis. There is, however, a strong case to be made for building out a robust bikesharing system not just in San Francisco, but in every major US city. Such systems boost the local economy, reduce congestion, improve air quality and public health, and complement pre-existing forms of transportation.