Ranking the Most (and Least) Nutritious Meals for Your Dollar

Eating healthy often gets boiled down to counting calories, but for a variety of health outcomes like improving brain health and losing weight, the key is not how much you eat but what you eat.

Furthermore, it feels as though eating healthy costs more, but is that true? And are there foods that cost less that still offer a lot of nutritional benefit?

We decided to analyze data from Priceonomics customer wellio, a company that is able to deconstruct recipes and analyze the ingredients by nutrition and cost in order to make recommendations to its members.

We used this database to calculate an average cost per serving for a subset of common dinners. For each meal, we then derived a health score based on domain experts and the the nutrient-rich foods index (NRF9.3), which encapsulates a food’s nutritional density (i.e., the extent to which it provides a balance of essential nutrients like protein, fiber, and vitamins).

We first wanted to understand the health value of the typical home chef’s dinner. We culled the wellio database of over 5 million recipes, analyzed from over 9,000 sites, to a list of 85 most common American dinners. Then we combined the nutrient-rich foods index (NRF9.3) and domain experts’ knowledge to calculate a health score for each meal on a scale from 1 (very unhealthy) to 5 (very healthy). Take a look at the 25 most and least nutritious dinners ranked below. 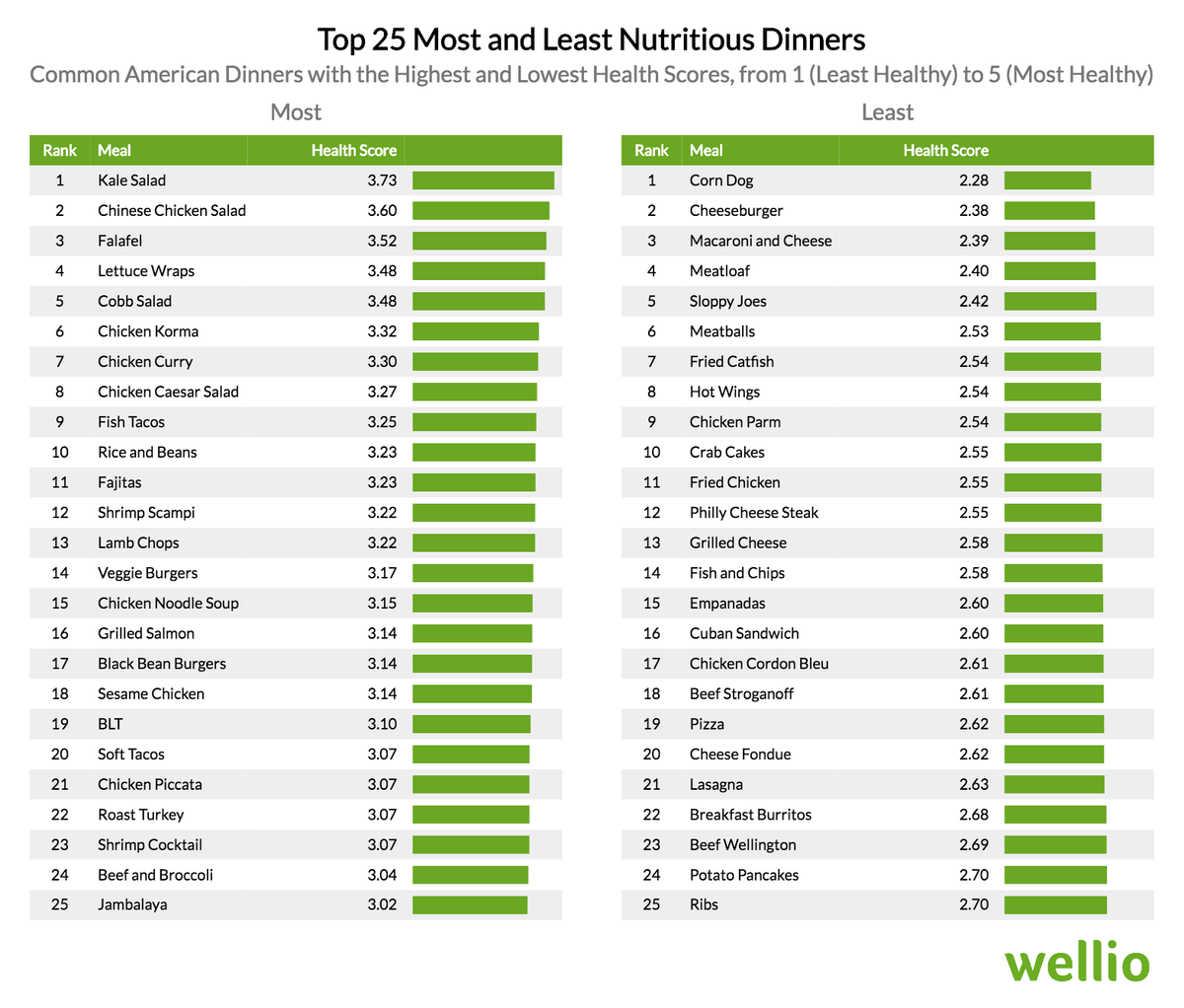 What did we find? Eleven of the top 25 most nutritious meals are vegetarian or pescatarian. Lean proteins like chicken are also well represented here: chicken is the main ingredient in 4 of the top 10 meals. On the other hand, beef and pork make only a few appearances in the top 25 most nutritious dinners, serving as the central ingredient in just two meals - BLTs as well as Beef & Broccoli.

The Corn Dog wins the day on our ranking of the least nutritious dinners. It encapsulates the elements that cropped up again and again on this list - processed red meat and a carb-rich outer shell, fried to a golden crisp. It only lacks cheese, which was otherwise well represented in this ranking. In fact, “cheese” appears in 5 of the 25 dinner names.

We next turned to the relationship between nutrition and cost. We broke our subset of 85 most common American dinners into groups based on health score and calculated the average cost per serving for each group. Group averages are charted below. 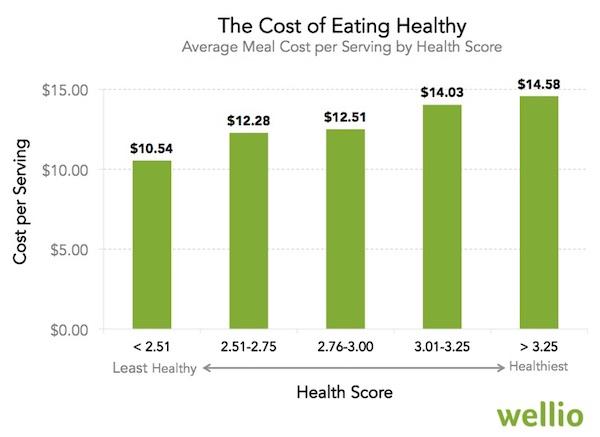 Good health is an investment: for every quarter-point increase in a dinner’s health score, you can expect to pay about a dollar more per serving.

The line in our chart above illustrates the typical health score of a meal with a given cost. At 3.02, for example, the health score of Jambalaya is about average compared to other meals of the same cost.

Looking at this chart, it becomes clear that some meals offer significantly more nutrients for your dollar than others. Prime Rib and Taquitos, for example, have similar nutritional values, but a serving of Taquitos is less than half the cost of a serving of Prime Rib. When you shell out for Prime Rib, you’re not getting more nutrients for your dollar. Taquitos are more economical.

We wanted to further explore the relationship between a meal’s actual health score and the health score it is expected to have based on its cost. Meals above the line, like Falafel and Chinese Chicken Salad, are healthier than one would predict given their cost. Nutritionally speaking, they’re bargains: you get more nutrients per dollar when you choose these options. Conversely, meals below the line, like Cheeseburgers and Shrimp & Grits, have lower health scores than expected based on cost; they’re nutritional rip-offs.

For each meal in our list, we calculated the difference between its health score and the typical health score of a meal with that cost (i.e., the health score predicted by our linear model from the analysis above). Below, we chart the top 10 meals offering the most nutrients compared to similarly priced meals - in other words, the biggest nutritional bargains. 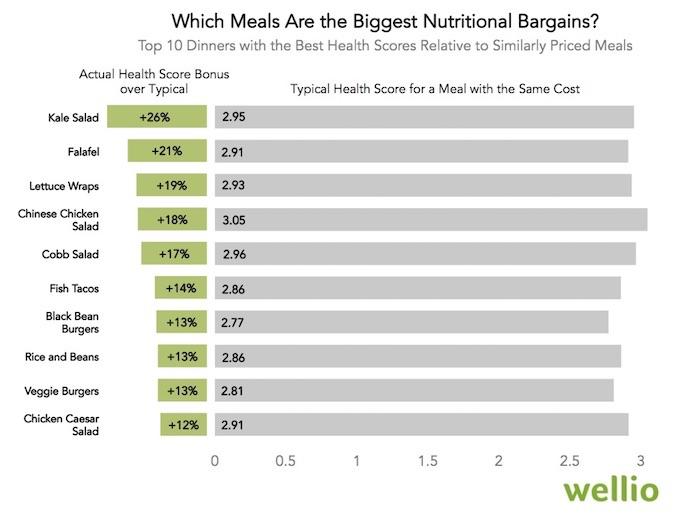 These dinners offer you the most nutrients per dollar. For $14.42 per serving, Kale Salad is one of the healthiest dinners you can buy, with a chart-topping health score of 3.73 - 26% higher than similarly priced meals. Other top nutritional bargains are veggie-rich dinners like Lettuce Wraps and Cobb Salad, plus meals based on plant proteins like Falafel, Veggie Burgers, and Rice and Beans.

Below, we chart the 10 meals with the lowest health scores relative to those expected given their costs. These nutritional rip-offs offer the least nutrition per dollar. 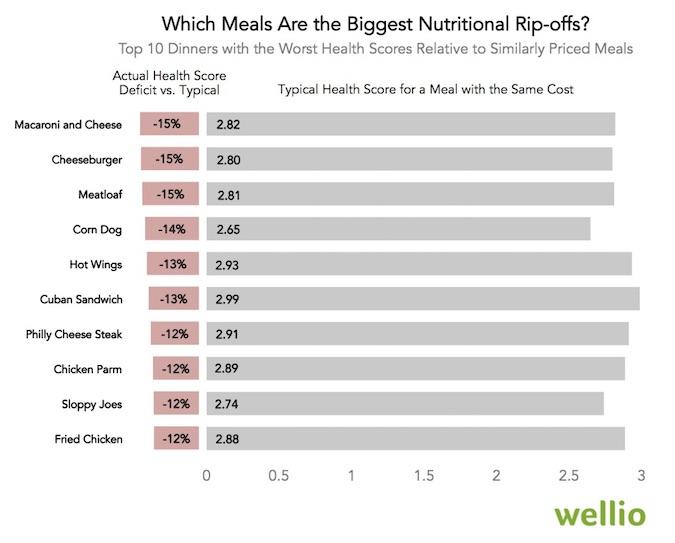 Mac & Cheese is the biggest nutritional rip-off on our list. The typical health score of a dinner costing $11.68 is approximately 2.82. Compare this to the actual health score of Mac & Cheese - it’s 15% less at 2.39 - and it’s clear you’re getting shorted. The remainder of this chart reads like a concession stand menu. These meals are empty indulgences with relatively few nutrients per dollar.

So what does this mean for the health-conscious consumer?

The relationship between cost and nutritional content is undeniable - eating well comes with a real economic cost. It may be tempting to let your wallet dictate your menu, but doing so will generally provide a diet of nutritionally empty meals like Corn Dogs and Cheeseburgers. Cheap eats may be easier on your budget in the short run, but consuming them comes at the cost of your long-term health.