Ranking the Most (and Least) Productive Countries 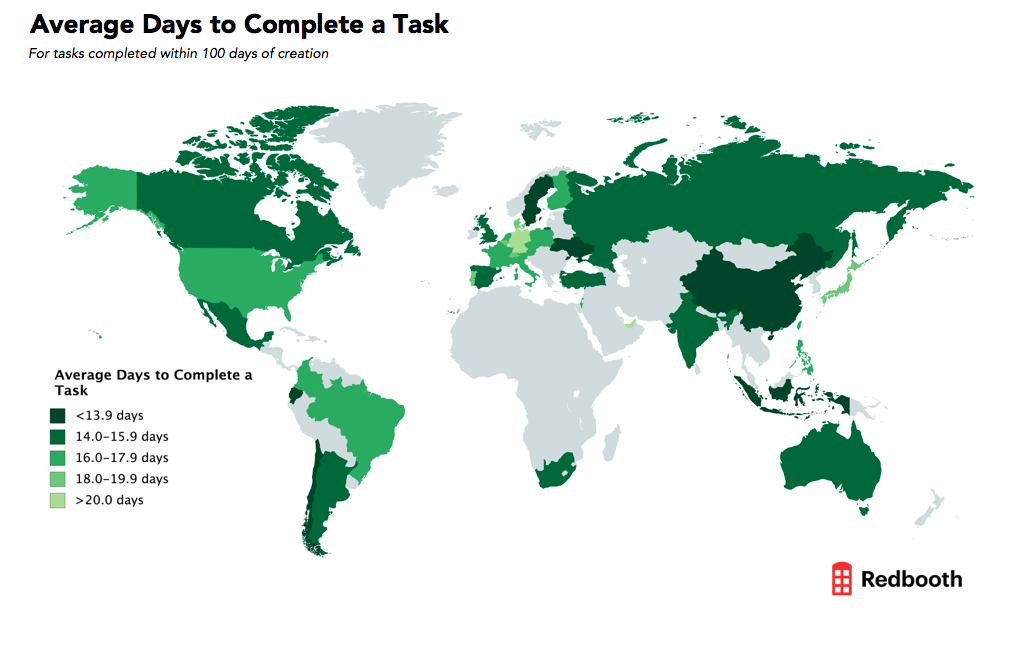 If there were a Workplace Olympics, which country would take home the gold medal for productivity? Who works the fastest, or finishes the most work?

We analyzed data from Priceonomics customer Redbooth, a project management software company, to see if there was an difference in task productivity across countries. We examined the anonymized outcomes of hundreds of thousands of tasks created and completed by countries around the world. How likely is it that work actually gets done based on the country?

We selected the top 40 countries with the most active Redbooth users both in number of accounts and number of tasks (500,000 minimum). We looked at the last three years of productivity, capturing completed (and uncompleted) tasks from all types of industries.

First, let’s look at how long it takes each country to finish individual tasks. 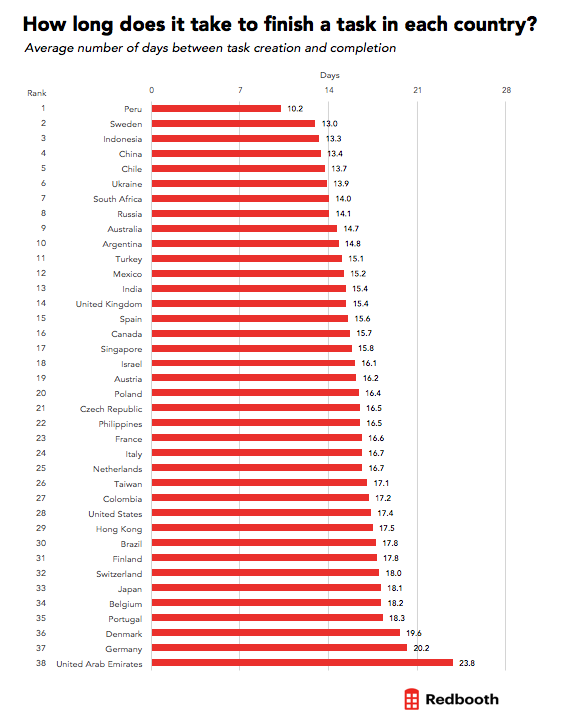 Peru finishes tasks the soonest, averaging just 10.2 days to check off their to-dos. Sweden and Indonesia follow, averaging 13.0 and 13.3 days to complete tasks.

The United Arab Emirates takes the longest to finish tasks, averaging 23.8 days - more than 3 weeks - to complete their to-dos. Germany and Denmark follow, averaging 20.2 and 19.6 days, respectively. According to the OECD, Germany and Denmark have the shortest workweek (26.2 and 27.1 hours) , which may be inhibiting their ability to get work done quickly.

Let’s plot that onto a map to identify any regional trends.

Countries with quick workers are spread out all over the world, with Peru, Sweden and Indonesia about as far apart as is possible for any three countries. Despite the spread of the top ranking countries, it would appear that Western Europe (Portugal to Germany) tends to finish tasks on the slower side, without a single country cracking the top ten.

While this gives a good picture of average country performance, what would the results be if we zoomed in on a shorter time frame? Which countries get a “head start” by getting the most work done in the first week?

Let’s look at the percentage of tasks completed within 7 days of creation by country. 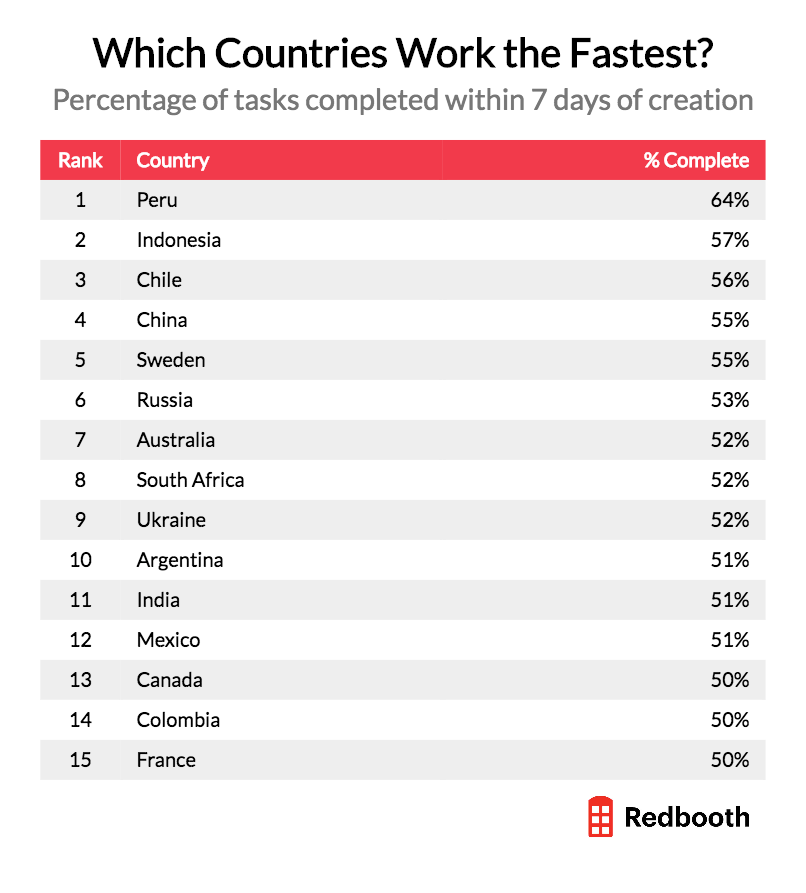 Peru still leads the pack, finishing nearly two thirds of tasks within the first week. The rankings are similar to the average days to complete a task rankings, with the top ten consisting of the same ten countries.

The biggest surprise is Colombia, who ranked 27th at 17.2 days to complete individual tasks, now ranking 14th for completing 50% of tasks within a week. It may be that Colombia has a subset of longer projects extending their average time to complete a task despite finishing the first half within a week. 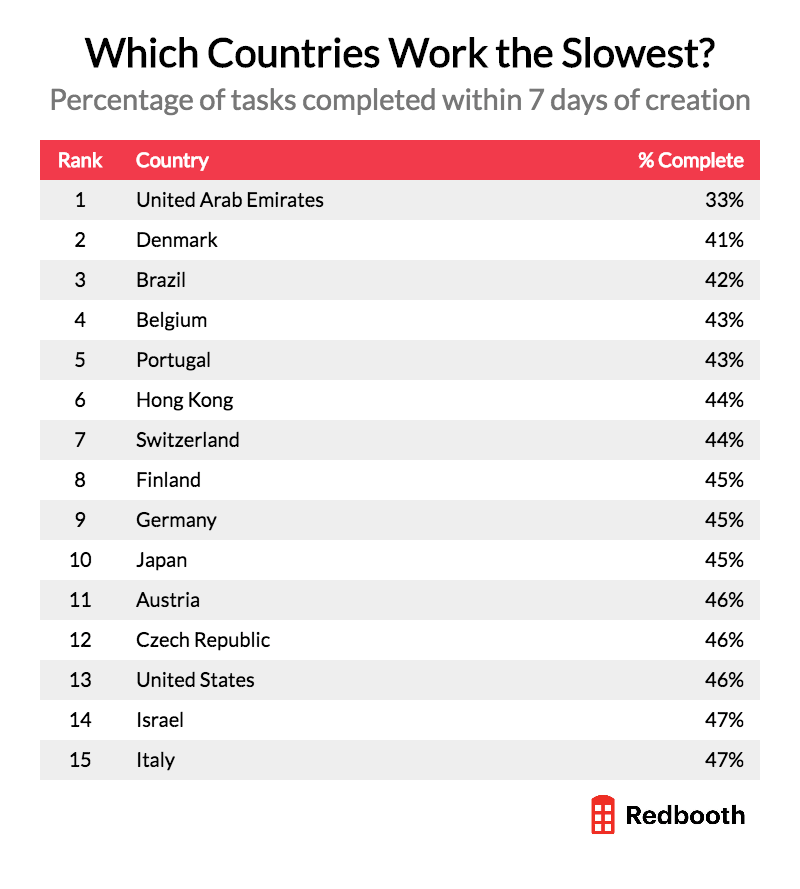 The ranking closely mirrors the average days to complete tasks ranking, with the exception of the Czech Republic and Austria, who rose from the middle of the pack (at 16.5 and 16.2 days to complete a task) to 11th and 12th for completing 46% of tasks within week.

While speed is an asset, the ultimate goal of creating a to-do list of tasks is to check them all off. Which countries have the best track record for actually completing tasks they create? 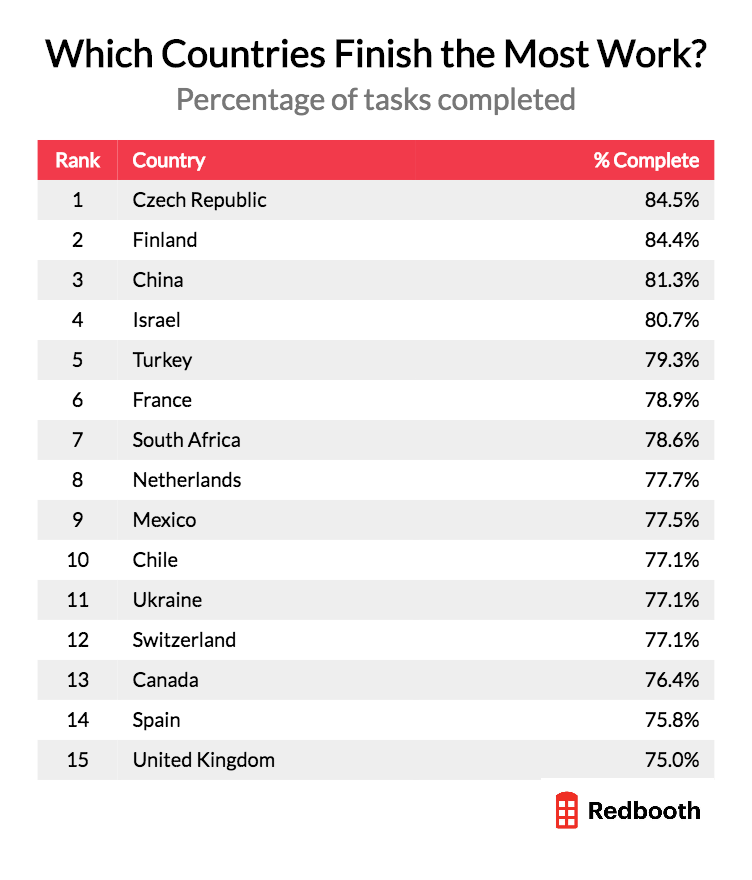 The Czech Republic has finished the most tasks of any country on our list - completing nearly 85% of all created tasks. Despite an average score for days to complete tasks (16.2) and a low score for percentage completed in seven days (46%), the Czech Republic comes through and gets the job done at the highest rate.

Finland follows closely at 84.4% and has a similar story, with an middling score for average days to finish tasks and low ranking for tasks finished with a week.

China, ranking third for finishing 81.3% of all tasks, has a different story. Rather than having an average pace and slow start in the first week, China ranked in the top five for both. China holds the title for fastest and most completed work. 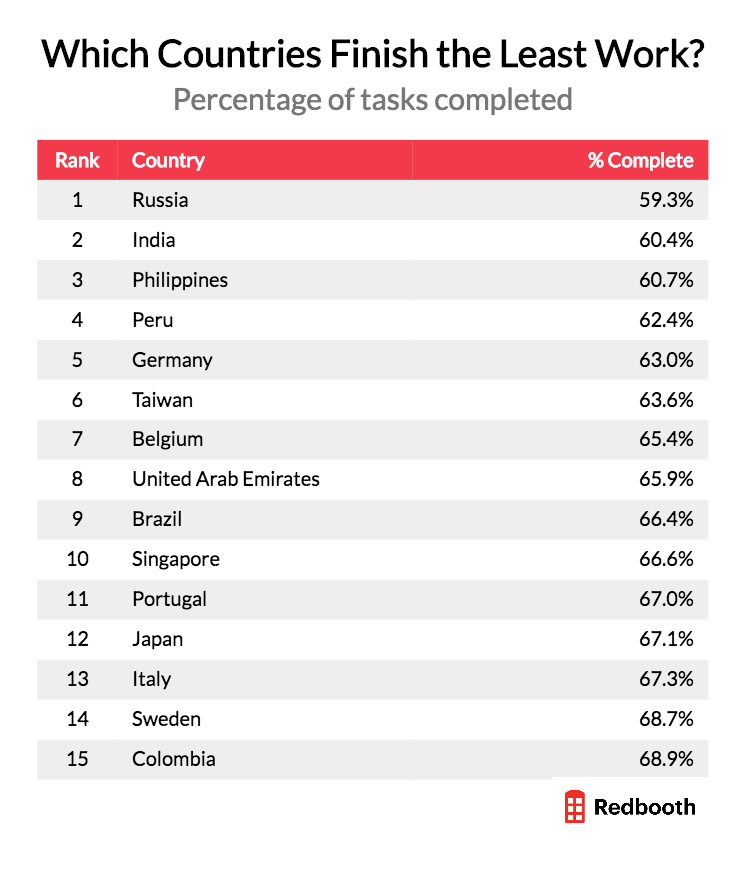 Russia ranks first for the least percentage of work completed, finishing fewer than 60% of created tasks. Despite a high score for average days to complete a task (14.1 days) and for percentage completed in seven days, Russia peters out and doesn’t follow through on 40% of tasks. Peru is similar, topping the rankings for speed but only completing 62.4% of tasks.

According to our data set, Peru finishes tasks the fastest, while the United Arab Emirates takes the longest to get work done. The Czech Republic finishes the most work, while Russia leaves the most to-dos unchecked. China balances speed and results to finish the most work the most quickly. While this study is based on millions of tasks worked on around the world, there are billions more that get completed on- and off-line each year. These results should be regarded as a peek into the working styles of our world - and not the entire picture.