Ranking the Most (and Least) Productive Industries 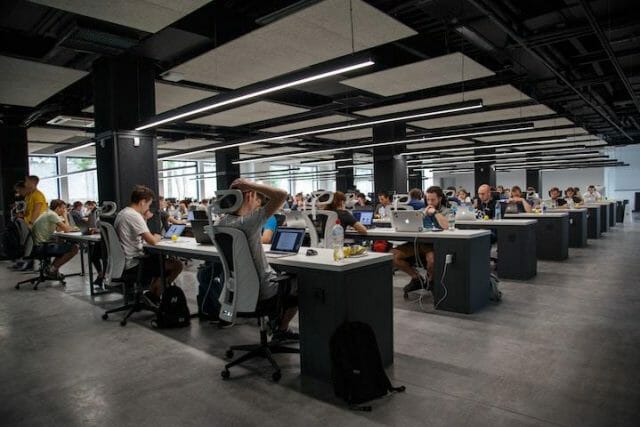 A common complaint for people about their workplace is that things never get done. Bureaucracy, politics, and coordination costs among teams means that projects are completed at a snail’s pace, if it all.

You often see this complaint among people at large companies, where these dynamics can be especially pronounced. You also tend to hear about it in certain industries with a reputation for slowness.

But is that actually true? Does it take longer for big companies to get work done than small companies? Are certain industries more or less productive than others? We decided to analyze our data to find out the answers to these questions.

We analyzed data from Priceonomics customer Redbooth, a project management software company, to see how long it takes for work to get done at different types of companies. We looked at anonymized data from nine million tasks completed over the last year to see how long it takes to get work done and whether smaller or larger companies get work done faster. Not only that, but we also looked at whether some industries were more productive than others.

We found that in fact, large companies get work done at about the same rate as small ones.  However, medium sized ones are 6.7% less productive than small ones, taking about 2.5 days more to complete a task.

Among industries, there is a huge variation in how long it takes to get work done. The energy industry ranks as the slowest to get tasks done (tasks take 59 days on average). Financial companies are the fastest industry, where a task is completed in 31 days on average.

To begin, we look at how long it takes for work to get done and whether that varies by company size. On Redbooth, the foundational unit of measurement is a task. When you’re working on a project, users create a task and then mark the task as complete when they’re done. The time difference between task creation and completion is how long it takes to get your work done.

While projects across companies and industries may be very different, at the task level there is a lot of commonality in terms of things that need to get done; tasks are often things like complete an RFP, fix a broken wireless network, hire a new employee.

The chart below shows the average time it takes to complete a task, split by small, medium and large companies: 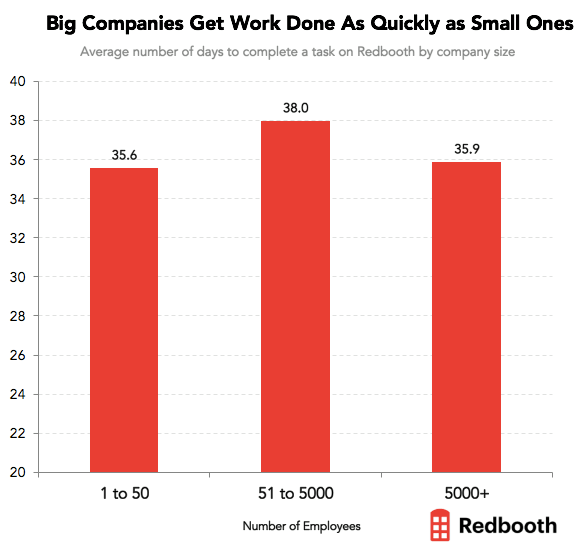 Enormous companies with over five thousand employees get work done about as quickly as small ones with less than fifty people. It takes about an average of 36 days for a task to get done at a small or large company.

Interestingly, mid-sized companies are the least productive. It takes 2.4 days more for an employee at a mid-sized companies to get their work done than at a small one. It’s possible that as companies grow, they become less productive as they cease to be small startups and now have to coordinate with many people. However, at some point, productivity enhancements need to be put in place to scale up to a large company.

Our findings partially confirm some recent economic research that in most countries, large companies are more productive than smaller ones. Not all small companies are fast moving startups after all, some are just small companies that struggle to compete against larger ones with more resources.

Below, we break down the company size cohorts into more granular buckets. A similar picture of productivity remains: 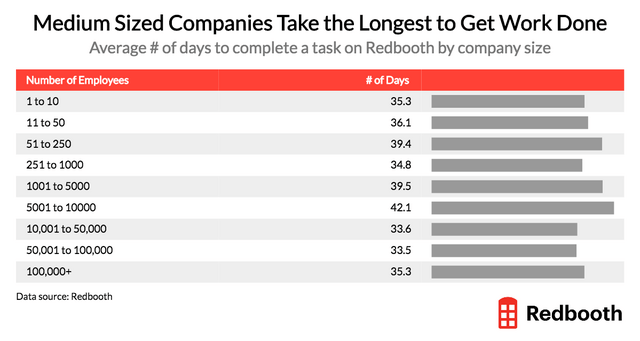 The segment of 51 to 10,000 employees is consistently the least productive. Companies with fewer than 10 employees or more than 100,000 both take on average about thirty five days to complete a task.

Our data indicates that large companies are just as productive as very small ones. Or if they are not, they’re at least good at scoping tasks in their project management system to be achievable during a reasonable time frame.

As the data above shows, company size plays a sizable role in productivity, but what other factors influence how quickly work gets done at a company?

Next, we turn our attention to productivity by industry. Do certain sectors have more or less productive employees, as defined by how quickly it takes them to complete a task on average?

The chart below shows the average time to complete a task based on industry sector: 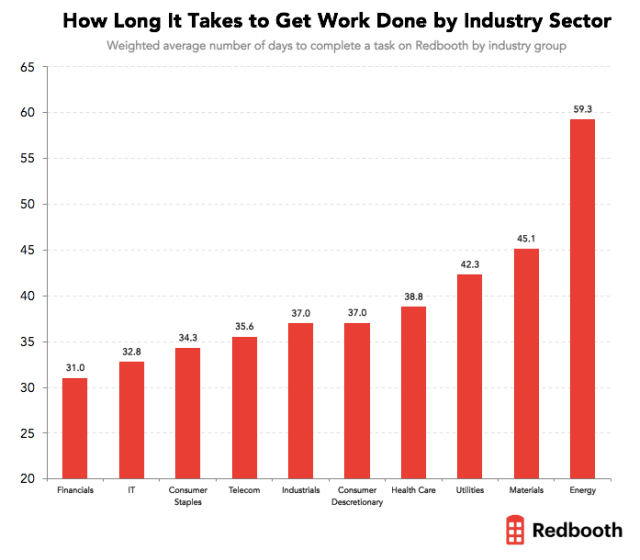 There is a pretty dramatic difference in how long it takes work to get done by industry. A task in the Energy sector takes about twice as long to complete as one in Financials. The next “slowest” industries are Materials and Utilities. Information Technology and Financials get work done the fastest. Later, we’ll dive into this data at a more granular level, but industries creating infrastructure and physical products tend to work at a more measured pace than ones that sell services.

It might not necessarily be a bad thing, however, for a company to take a long time to complete its work tasks. If the tasks in the Energy industry are more complicated than in IT, you would expect the tasks to take longer. Or if you work in highly regulated industry like Healthcare, additional compliance steps may result in work taking longer to complete.

We also have the ability to dive deeper into the industry taxonomy to get a more nuanced picture. Which “sub-industries” (more specialized work areas within a sector) get their work done completed fastest and slowest: 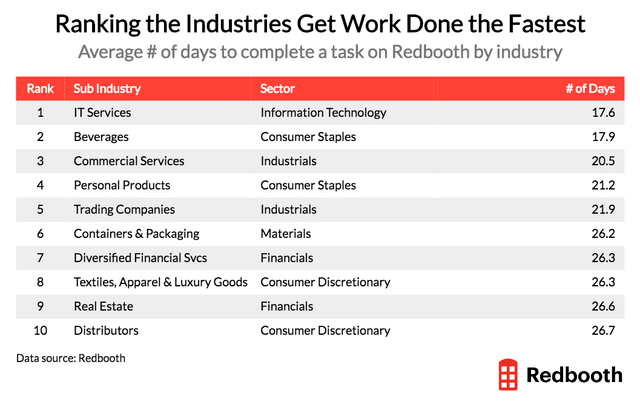 Of the 51 industries we looked at, IT Services gets their work done in the least amount of time. This isn’t terribly surprising if the tasks are high priority items like “fix the email server” that have to be completed quickly for businesses to operate.  Dominating the “gets work done fast” are consumer facing industries ike Beverages, Personal Products, and Real Estate as well as “services” for businesses.

Next, we look at industries that take the longest to get tasks accomplished: 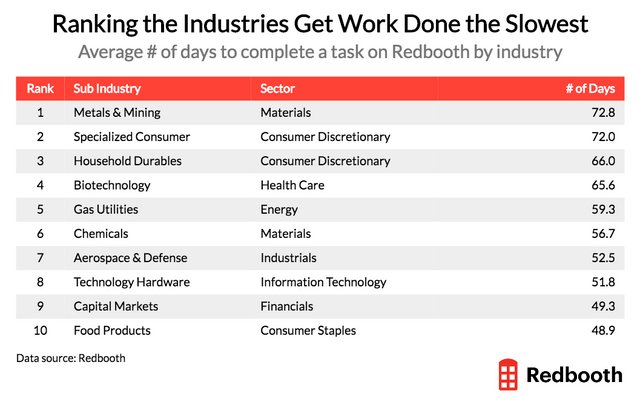 The industry that takes the longest to complete a task is Metals & Mining.  It takes almost four times as long for a task to be completed here compared to IT services. Industries producing complicated physical goods like Aerospace & Defense and Technology Hardware, also take a long time for work to be completed.

Curious where your industry stacks up in terms of productivity? To conclude, we present all the data on how long it takes for task completion in each industry where we have sufficient data to provide a productivity estimate. The chart belows shows industries grouped by their sector, sorted from working the slowest to the fastest: 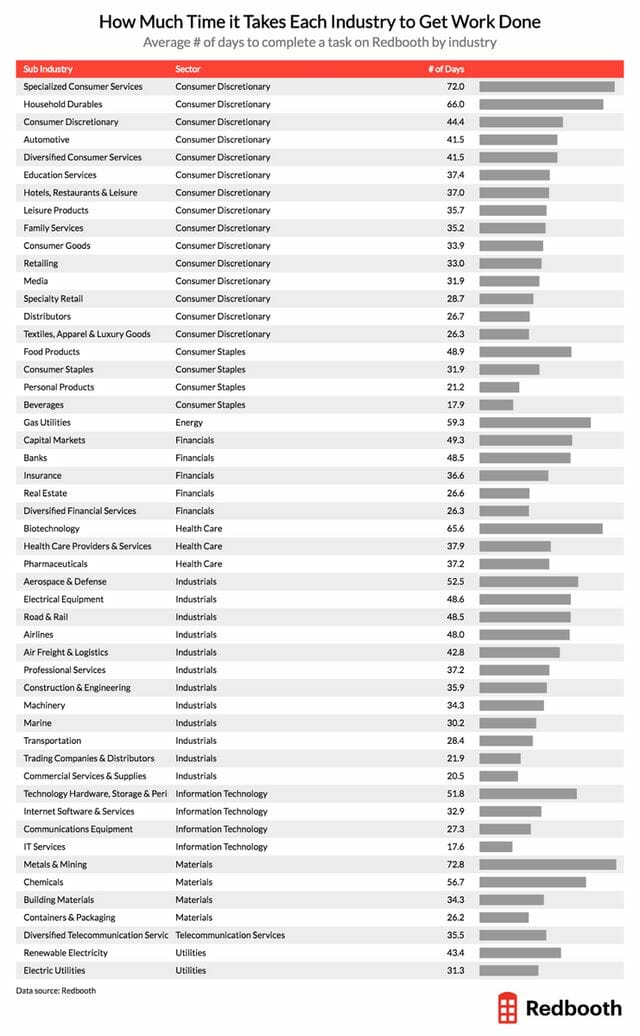 Within a given sector, there are huge differences in how long it takes to complete work. For example in the Material sector, Metals & Mining tasks take almost 73 days, whereas Containers &  Packaging tasks take 26 days. Similarly, in the Financials sector, Capital Markets tasks take nearly twice as long as real estate ones do.

Depending on your industry and company size, it takes different amounts of time for work to get done.

While one might expect big companies to be the slowest, the results revealed that they are just as productive at finishing their tasks as small companies. However, medium sized companies with 51 to 5000 employees are significantly slower at completing tasks than smaller or larger ones.

Not surprising, the industry you work in helps determine the pace at which work gets done. Industries like Metals and Mining, Technology Hardware, and Aerospace & Defense have work that takes a long time to complete. On the other hand, service providers like IT Services and Commercial Services providers are expected to get their work done much faster. If you’re building a rocket, you can take your time. If you’re responsible for fixing the Internet in the office, you best get the task done quickly.