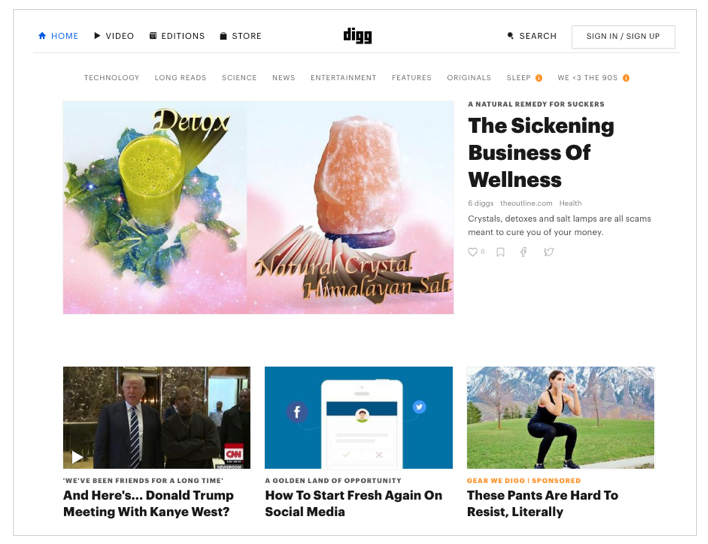 This post is a collaboration between the Priceonomics Data Studio and Digg. Does your company have interesting data? Become a Priceonomics customer.

What’s the best thing on the Internet right now?

Between the latest longform deep dive, the wonky thinkpiece du jour, the video currently going viral, and the eighteen other tabs you have open in your browser, the Internet is an embarrassment of riches. Sadly, there are only so many hours in a day and so many megabytes in your data plan.

We decided to analyze data from the from the front page of Digg to see which publications and authors were making the most popular content. Digg’s frontpage is a tasting platter of the best of the web. Visitors are treated to a mix that is serious and irreverent, inquisitive and whimsical, and funny and surprising. The site’s frontpage includes the title, blurb, and hyperlink for around 40 articles and videos.

But the site is also a snapshot of our politics and culture at any given moment. What topics are capturing the popular imagination? Which publications and writers are tapping into the zeitgeist? Drawing on Digg’s data from mid-2012 to the present, we decided to find out.

What we discovered was a mix of old media and new, well-known writers and up-and-comers, the rise and fall of various publications, and an enduring interest in the personages of Barack Obama, Donald Trump, and God.

We began our analysis by looking at the most popular publications on Digg from 2012 through 2016.

We find a familiar cast of characters at the top of the list. The New York Times, TheAtlantic, Wired, and TheGuardian are exactly the top-tier media sites one might expect on a roundup of the best writing and content.

Still, there are a few surprises. Amidst the titans of old media, we find insurgents like Pacific Standard, Nautilus, Aeon, and Atlas Obscura.

The mix of old and new is by design. According to Digg Editorial Director Anna Dubenko, the site’s seven editors look anywhere and everywhere for content that is “smart, interesting, tailor-made for curious people—but not a listicle or pedantic.”

“Tailor-made” is a sharp departure from the Digg of yesteryear. Those of us who remember the olden days of Web 2.0 (back when Facebook was private and Twitter was a little known “microblogging service”) remember Digg as an uncurated forum for video game tips, tech news, and insular memes. Digg was the stream of consciousness of mid-2000s nerdom—Reddit before there was Reddit.

But starting in 2012, Digg reinvented itself. Rather than rely on the whims and clicks of its users, Digg’s editors purposefully pick and choose articles, essays, and videos. It isn’t about click-chasing. Dubenko says she hopes publishers and writers will see Digg as “a merit badge for their journalism.”

Digg awards those merit badges to big and small sites alike. That’s why some of the most popular writers on Digg are not New York Times or Atlantic staffers, but people like PetaPixel’s Michael Zhang and Atlas Obscura’s Dan Nosowitz. 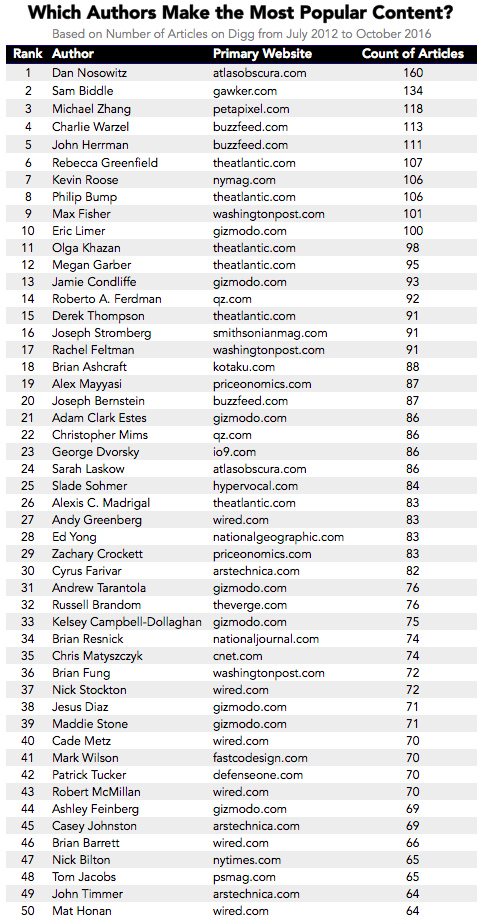 When we exclude the 100 most popular media sites, we can see writers from small or independent publications—like Slade Sohmer of Hypervocal—who Digg really “dugg.” If you don’t recognize these names, that’s the point. Curators want to highlight writing and authors you wouldn’t find otherwise. 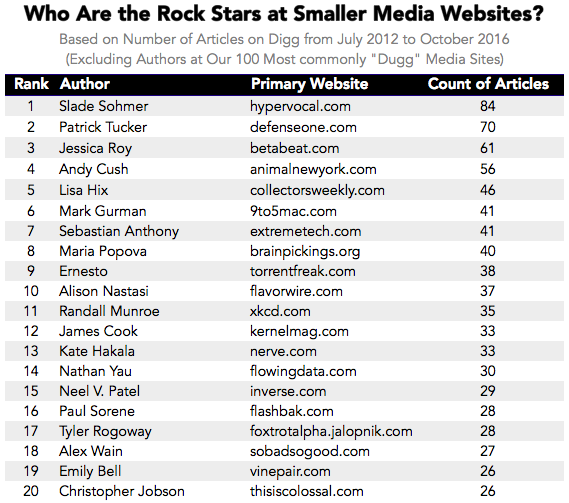 “Linking to the latest Times magazine feature,” says Dubenko, “is maybe doing some discovery for some people, but people can find that stuff on their own. Our value is sitting and sifting through stuff, exposing you to sites you might not come across on your own.”

And if Digg’s plan is to keep surprising its readers, it has to keep up with the newest publications and content producers. We looked at the top ranked sites on Digg in 2013 and compared them to the top list from this year.

While a handful of old guard media companies like the Times and the Atlantic dominate the top ten in both years, the above chart documents the rise and fall of different publications. Here the constant churn of the media environment is on full display.

Since 2013, Atlas Obscura, FiveThirtyEight, and Medium have either launched or come into their own as longform-oriented media companies. Other sites have fallen from prominence. Some of these changes represent economic trends in the media industry, while others reflect editorial changes.

Take Modern Farmer, for example. The site, which offers a fun, accessible take on food and agriculture issues, made it into the top 50 list in 2013. But at some point the magazine changed their style from literary and accessible to practical.

“Less ‘weird goats’ and more ‘what to feed your goat,’” says Dubenko. As a result, Modern Farmer fell off the list.

Digg’s frontpage doesn’t just track changes in the news industry. It also reflects the most talked about people. The list below shows the top ten people covered on the site between 2013 and 2016. We were able to determine if a person was the subject of an article by feeding the text of every article on Digg into Google’s Natural Language API. (The API counts “God” as a person.)

From the Boston bombing in 2013 (Dzhokhar Tsarnaev) to the unrest in Ferguson in 2014 (Michael Brown) to the interminable election season that dominated the news in both 2015 and 2016 (Hillary Clinton and Donald Trump), the table provides a brief history of the people and stories that have seized the spotlight every year.

Still, no matter how the public’s attention has shifted, some things never seem to change. In each year, Barack Obama and God have been popular topics on Digg. But they were both eclipsed by Donald Trump.