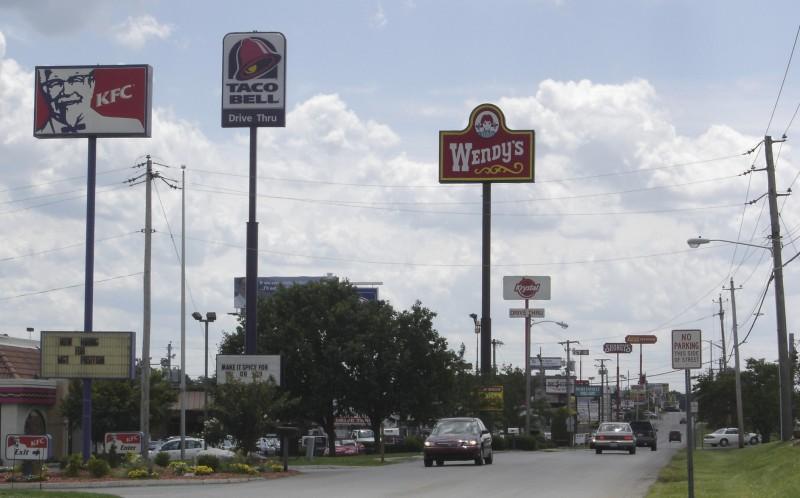 Close to a quarter of adults in American eat fast food *every single day*. The popularity of the drive-through window is a good indicator that we like to eat on the go, or at least that we are too busy to stop for a meal. It’s not surprising then, that fast food restaurants are in every city in America.

We analyzed data from Priceonomics customer Datafiniti, a data company that maintains a database of restaurants, to see where fast food restaurants were located (and where they weren't). Then, by sorting the data geographically and adjusting for population size, we can see what areas of the country have the highest concentration of fast food restaurants.

Cities with the most fast-food restaurants per capita, on the other hand, were spread more evenly throughout the country with Orlando, Cincinnati, and Las Vegas in the top three spots. Cities with the fewest fast-food restaurants per capita are mainly concentrated in California and the Northeast with New York at number one, and four California cities in the top ten.

McDonald’s (the second largest fast-food chain) is in every major city in America. Orlando, FL and Las Vegas, NV have the most McDonald’s per capita at 20.9 and 13.9 restaurants per 100k residents respectively. 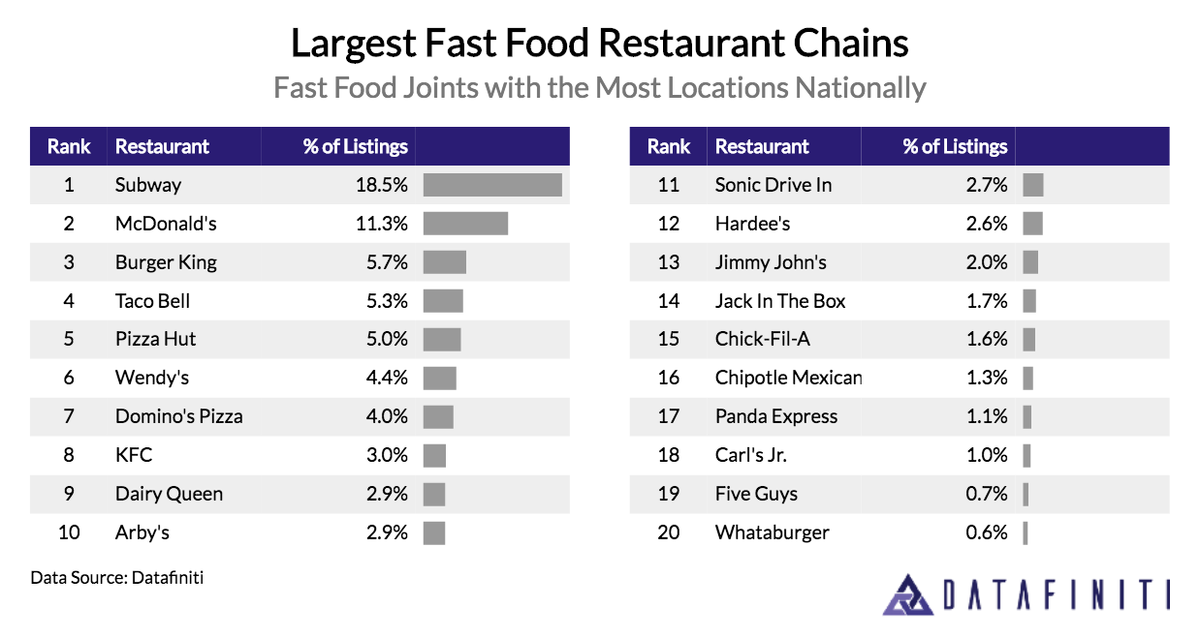 From this list, we see that just two restaurants, Subway at 18.5% of listings and McDonald’s at 11.3% of listings, account for over a quarter of fast food restaurants in this dataset! At a distant third is Burger King at 5.7% of listings. Rounding out the top twenty is Whataburger at 0.6% of listings, which is surprising considering their locations are only in ten states.

Of course, looking at the numbers for the nation as a whole doesn’t really give insight into what is going on in any one place. As many of us know, fast food is more popular in some areas, and less popular in others.

Next, let’s look to see where fast food restaurants are most popular on a regional scale. 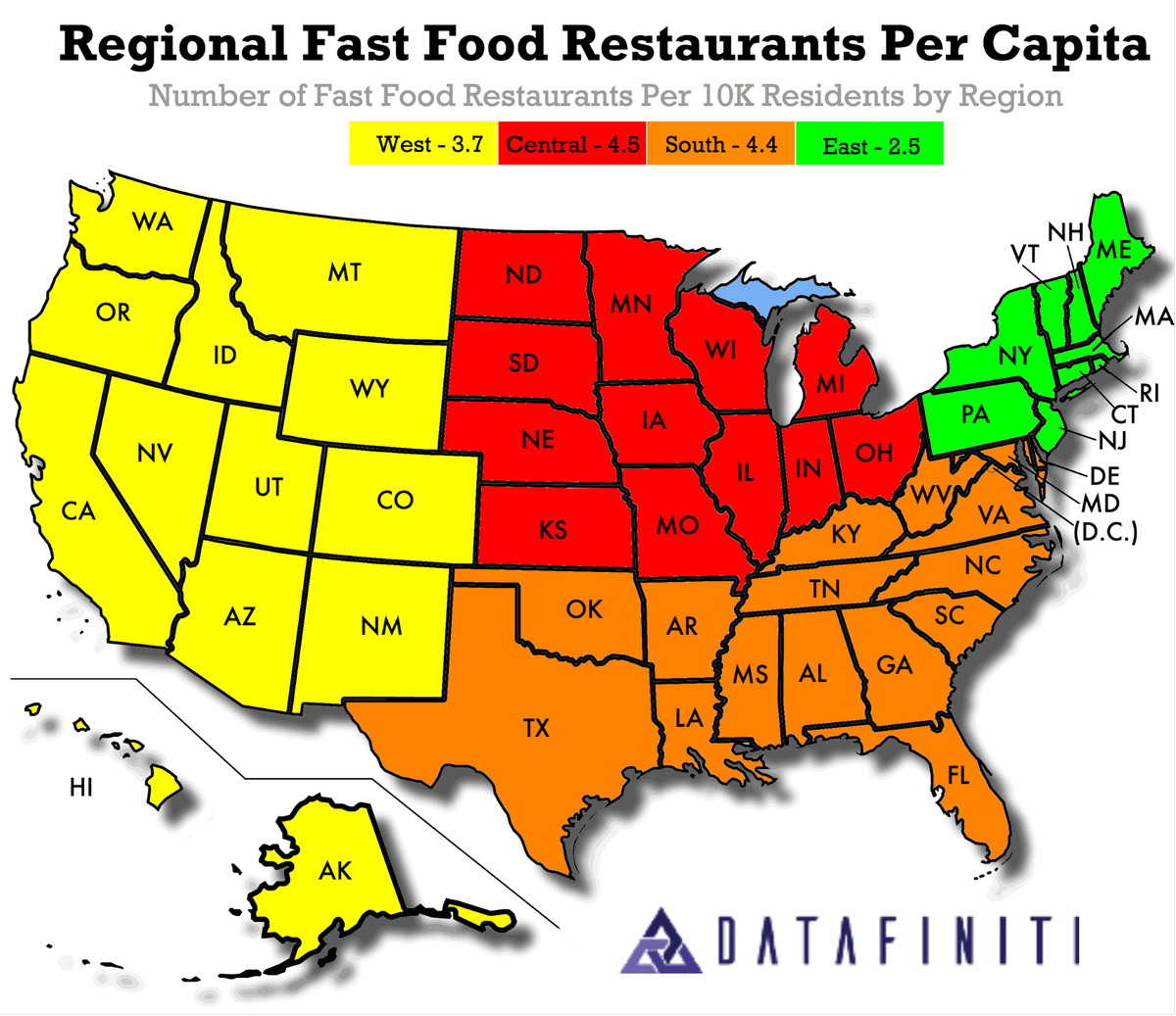 Now that we know what regions have the most fast food let’s look at individual states. 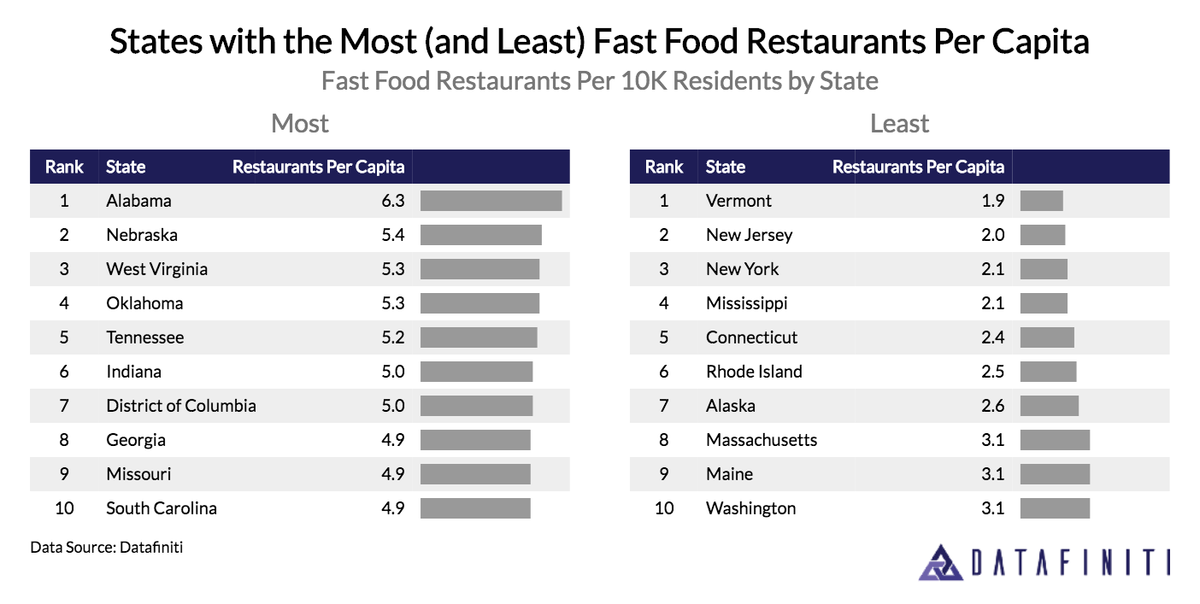 We just looked at major cities in America, but what about smaller cities? When including smaller cities, the number of restaurants per capita goes much higher. For this analysis, we only used cities where there are 50 or more fast food restaurants, so we avoid looking at very small towns with only a few restaurants.

Again, this list is dominated by Southern cities, with Katy, TX taking the top spot with a whopping 62.5 fast food restaurants per 10K residents. In the distant second, with just 43.9 is Naples, FL. Just two cities are outside the South with Traverse City, MI at 36.8 and Littleton, CO at 30.0.

Let’s take a moment to look more closely at the second largest fast food chain in America, McDonald’s, and just how prevalent it is. Note for the chart below we are now looking at the number of McDonald’s per 100K residents.

Orlando, FL tops the list at 20.9 fast food restaurants per 100K residents with two other major cities in Florida, Miami at 13.0 and Tampa at 9.3, making it in the top ten. We also see that McDonald’s is popular nationwide with Las Vegas, NV at 13.9, Minneapolis, MN at 10.4, and Buffalo, NY at 9.7 also making the list. For cities with the fewest McDonald’s per capita, five of the top ten are in California, with Ventura, CA taking the top spot at just 0.4.

As you can see, you can find fast food spread across the nation with restaurants in every major city in America. Southern and Central states are the place to go if you love fast food, and head to the East or out West if you don’t. Southern cities have abundant options for fast food, particularly in Florida, and head to California if you don’t want to eat on the go. As for McDonald’s, it appears that this major restaurant chain has spread to every corner of America. Head to California if you don’t like the golden arches, and head basically anywhere else if you do.