Results from our “Pay What You Want” Experiment 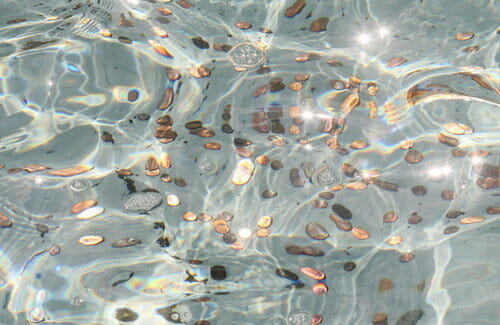 Last week, we ran a quick experiment on our blog. We asked our readers how they would propose to save journalism. In the post, we noted that many of the thought-leaders in the space suggested that the future of funding journalism might involve voluntary donations from readers. The implication was that the future of journalism looks a lot more like NPR than The New York Times.

We were intrigued. Could a “pay what you want” model help publishers monetize content? Moreover, social science research indicates that people are more inclined to give if there is a charitable component. We were doubly intrigued.

As a test, we proposed that readers of our blog donate any amount of money (of which we’d donate 100% to charity). In return, they could tell us what to write on a forthcoming blog post.

Would people volunteer to “pay what they want” for this very minor benefit and support charity?

Here are the results.

Saving Journalism Does Not Necessarily Rile People Up

The title of the blog post was “How Would You Save Journalism?” The rate at which subscribers to our email list opened the article was about 50% less than our average click through rate. Click through rates were also much lower than normal on Facebook, Twitter, and Hacker News. About 2,500 unique visitors viewed the post, which is roughly 90% fewer visitors than an average post on this blog of comparable word count. People seem to be much more interested in the topic Phish or Ivy League admissions!

So the words “How Would You Save Journalism?” was not necessarily sufficient to get people riled up and ready to save journalism. But the awesome thing is that the 2,500 people who did see the post were part of our experiment. Would any of them voluntarily give money to help choose a future Priceonomics blog post topic? It turns out that, yes, they would!

This small amount of traffic still managed to raise $180.22 for charity. Let’s break down the numbers.

Stats around “Pay What You Want and Support Charity”

Before breaking down the stats further, let’s go over what the experiment was testing. Would people voluntarily go through the hassle of sending us money? Would they do so for a very small benefit (helping guide a future blog post) that they would be able to consume (read the blog post) even if they didn’t make the contribution?

Also remember that all the money given to us by our readers went to charity. If the experiment were “give money to Priceonomics, a corporation,” it could have turned out differently. Also, this was a one time experiment. If you asked for money on every blog post, readers might not react as well.

Asterisks aside, let’s dig in to the numbers. First off, let’s exclude the page views and $60 in contributions that were made by Priceonomics employees. While these four people are handsome, smart, and generally amazing, it would be unfair to include them in the analysis, no matter how handsome they are.

So, for everyone else, here are the stats. There were 2,588 unique visitors to the post. Eleven of them went through the complete pain in the butt process of sending us money by Paypal. This by itself is interesting to us. 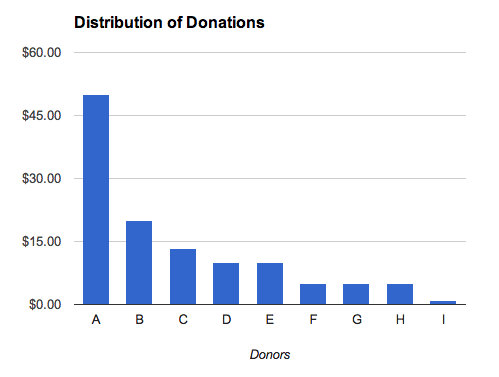 Much of the literature on micropayments says that people won’t spend small amounts of money on content because the friction is too high. But here are 11 people that went through a lot of friction to send us money that they didn’t have to.

Perhaps thinking about payments as friction is the wrong way of thinking. Perhaps publishers should instead consider how you recast paying as supporting causes, people, or charities you like. Is there a way to recaste “friction” as a feature, rather than a bug?

Of the people that visited the article, 0.043% (slightly less than half of one percent) opened up their credit cards and paid money voluntarily. All of the donations came through Paypal and none of them came through the other option, Bitcoin.

How Profitable Could “Pay What you Want” Be? 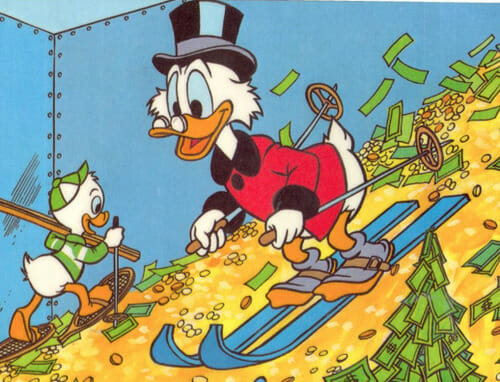 Let’s compare the money generated from this “pay what you want” experiment with how much money you could make off advertising instead. If these donations were revenue, it would have generated $120 with just 2,588 pageviews. In ad industry lingo, this is a $47 CPM (cost per thousand impressions).

Monetizing content at a $47 CPM would be outrageously good compared to advertising. If you had put Google Adsense ads on the site instead, it would get about $1 CPM at best (in this author’s experience). If you sold ads on your own, maybe you could get a $10-$20 CPM.

Of course, if there were no charity component, people may have been less likely to give. And yes, this was just a tiny experiment that might not scale over millions of page views. But maybe it would. Has anyone tried?

The payoff for making the donation was proposing a topic for the next article on the Priceonomics blog. We curated the suggestions and donors will next vote on their favorite topic for us to write about. “Big” donors will get slightly more influence. About half the donors didn’t send in a topic or just wrote that they were donating money to play along in the experiment or because they liked our blog. People are awesome, thank you!

Here are the topics! We culled through the donor suggestions to pick the five most interesting ones.

If you want to vote and choose which one we write about, make a donation of any amount by paypal and you can vote!  (If you’ve already made a donation, we’ll contact you by email to get your vote.)

Donate here to vote on a topic.

1. The Prostitution Business. We’d talk to local prostitutes in San Francisco, find out how they got to be prostitutes, what their job is like, and how the economics of their industry worked. What’s the price of sex?

3. The Informal Economy of Dolores Park in San Francisco. Talk with the various vendors, beer salesmen, and drug dealers in Dolores Park. How much money do they make? Do the cops bust them?

4. The Freelance Economy. What are the structural barriers in place that make it difficult to strike out for yourself as a freelancer or small business? Health care, taxes, bureaucracy? Are we moving to a world where we are all freelancers?

5. The Economics of Ski Resorts. Skiing is an expensive sport, but do ski resorts actually make money? They have to maintain a friggin’ mountain after all. What’s the business of ski resorts like?

Click this above button to make a donation and vote.

Send any amount of money: a dime, a dollar, $10, a cool grand. If you donate more, you’ll have slightly larger voting share. As a reminder, we’re giving 100% of the money to charity (EFF, Pro Publica & Watsi). We’ll update the amount raised by the experiment here: 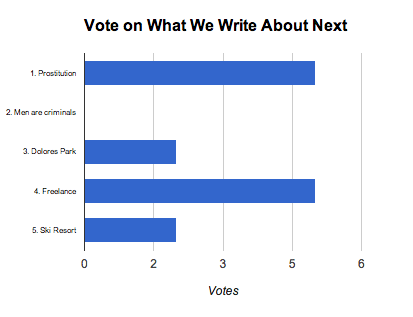 The “pay what you want, support charity” experiment had some interesting, but limited implications. First, if you ask people to open their wallets, some of them will. That’s pretty awesome and frankly shocked us. They’ll even go through the pain of using Paypal and send you money to support a cause they like.

Could something like this be used to save journalism? If at the end of every article on the web, there was an easy way to pay what you want for it, would anyone do it? How would you incentivize people to do it? Would people send money to a corporation or would people only make voluntary donations to non-profits like NPR?

Either way, this experiment was really fast, easy, and fun. Thanks to those of you that participated and donated. If you want to choose our future blog post, donate here.

What do you think? Could “pay what you want” save journalism or does it reinforce the notion that content has no value?