Safety in Numbers When It Comes to Biking to Work Most people in the Priceonomics office bike to work through the streets of San Francisco. So we’re particularly interested in data that shows how safe or unsafe cycling is as a form of commuting. Biking to work is a pretty efficient way to get around the city, but the downside is you could get hit by a car and get seriously injured.

A reddit user, foreignthumbwarning, put together an interesting dataset to see how common bike accidents are in 96 California cities. He looked at how likely the average bike commuter would be to get in an accident in various cities and compared that to the percentage of people in that city that biked to work.

Lo and behold, in cities where biking to work was fairly common, the number of per capita accidents was quite low: 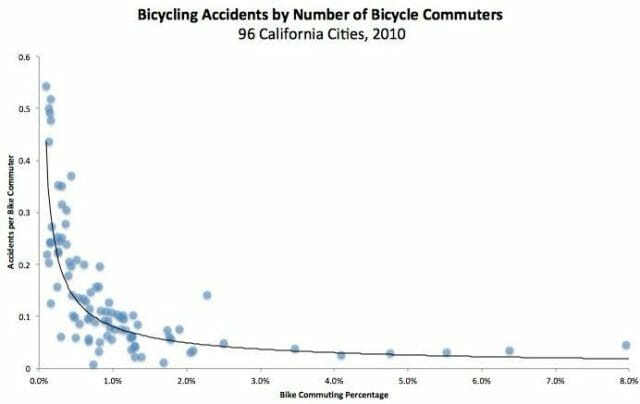 The city that performed the best was such an outlier that it didn’t even make it onto the graph. In Davis, 22% of the population commutes to work via bike and had under 200 bike accidents in 2010. Compare that to Los Angeles, where less than 1% of the population bike-commutes and where there were over 24k accidents.

Is this merely a fascinating correlation, or a sign of something more? A 2005 Australian study found that “in Australia, the risks of fatality and injury per cyclist are lower when cycling is more prevalent.” According to the author of the study, the risk per kilometer of injury decreases 34% when the number of cyclists double. Motorists might be changing their driving habits as they become more accustomed to cyclists on the road. There is, however, the possibility that bike safety is more significantly tied to factors such as existing bike infrastructure and geography.

Whatever the reason, it seems that cities with a lot of bike commuters tend to be safer for cyclists.