He’s not the first man to sell something that doesn’t exist, but he might be the most entertaining.

The New York Times reports today on Dennis Hope, “The Man Who Sells the Moon”:

“In 1980, I was going through a divorce and hadn’t worked in almost a year. And I was almost out of money and I was thinking what would really make me happy and I thought if I had some property I could mortgage it and move to Los Angeles and get an acting career going. When I had this thought, I looked at the moon and thought, ‘There’s a lot of property.’”

Dennis Hope has been selling property on the moon since 1980. He has sold six hundred million acres of the moon’s 10 billion, in addition to properties on Mars and several of Jupiter’s moons.

He’s not the first to sell something fictional. People have sold ghosts on Ebay (although they are required to throw in a physical object – like a cane belonging to the ghost in a famous case – to comply with Ebay’s rules) and the International Star Registry has sold naming rights to stars for 34 years despite lacking any authority to do so.

But not everyone has the pluck of Dennis Hope, whose every quote and act seems to have been written by Tina Fey for a Saturday Night Live sketch. He claims ownership because the 1967 Outer Space Treaty allows no nation to claim sovereignty over the moon. He sent the United Nations “a note” explaining his intent and asking for them to write back if they have a problem with his claim of ownership and “never heard from them.”

“I’m actually the richest person on the planet… In theory.” 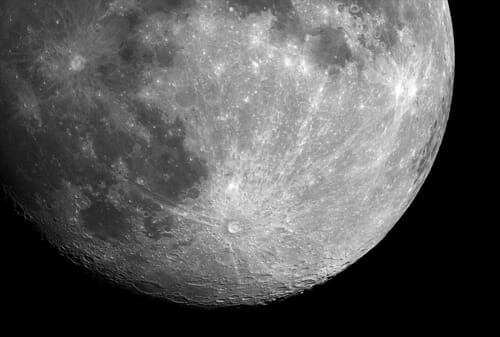 His licence plate reads “MOONSLR,” he considers anyone else selling lunar properties “criminal in their intent,” he tells his interviewer with a straight face “I’ve always had this honesty quirk about me,” and he draws plans for lunar bases on scraps of paper and communicates with “non Earth-based governments.”

“It’s as real as any property you can buy on earth. I file a declaration of ownership with the United Nations, otherwise I wouldn’t do it.”

You can watch the full six-minute documentary here.

Mr. Hope actually has some great business instincts. Entrepreneurs often say that success doesn’t come from a great idea, but from execution. Hope echoes this, saying he’s not the brightest person in the world, but he had an idea and “followed through for the last 30 years.”

Unfortunately the documentary doesn’t ask for the details of the business. Mr. Hope claims to have over 5 million property owners, sells about 200 properties per day, and charges $24 per property. (Somehow only 17% buy it as a novelty gift, at least according to him.) Although he has raised prices over time, selling 5 million properties at pure profit would have to represent a really good amount of money.

He once was contacted by someone claiming to own the sun who demanded to be paid for providing energy to all his extraterrestrial properties. Faced with audacity on par with his own, Mr. Hope responded, “We decided we don’t want your energy. Please turn it off.”