Should Bikes Have to Stop at Stop Signs? 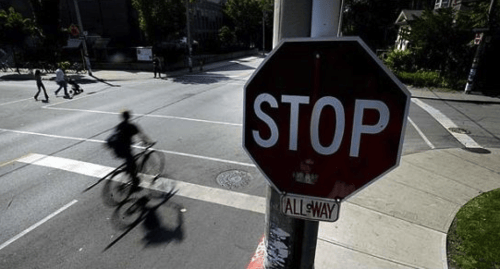 Spend any time observing the streets of San Francisco and you’ll notice that most people riding bikes do not stop at stop signs. Cyclists either blow right through the signs or slow down just enough to make sure it’s safe to pass. They almost never stop completely. A local news segment documents the phenomenon: 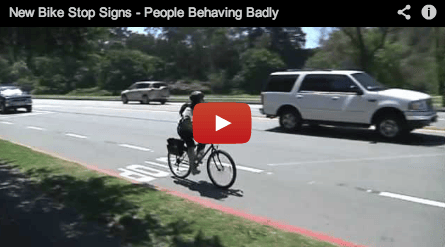 The segment also makes clear that stopping a bike can be a pain in the ass and often pointless. In the above case, there is no possible cross-traffic, no pedestrian traffic, and the bike is in a dedicated bike lane. Does the bike need to stop? But by that rationale, should even a car be allowed to roll right on through?

Braking a bike and building up momentum again takes a decent amount of work. It might sound lazy, but it probably explains why cyclists ignore stop signs. This Berkeley physics professor outlines why stopping is such a pain for cyclists:

One way cyclists conserve their energy at stop signs is to slow down, but not stop. A cyclist who rolls through a stop at 5 mph needs 25 percent less energy to get back to 10 mph than does a cyclist who comes to a complete stop.

Only one state makes an exception for cyclists at stop signs – Idaho. In Idaho, cyclists only need to treat a stop sign as a yield sign:

A person operating a bicycle or human-powered vehicle approaching a stop sign shall slow down and, if required for safety, stop before entering the intersection. After slowing to a reasonable speed or stopping, the person shall yield the right-of-way to any vehicle in the intersection or approaching on another highway so closely as to constitute an immediate hazard during the time the person is moving across or within the intersection or junction of highways, except that a person after slowing to a reasonable speed and yielding the right-of-way if required, may cautiously make a turn or proceed through the intersection without stopping.

This sensible law might do a lot of good if applied more broadly. It outlaws a common bad behavior by cyclists – blowing through stop signs at crowded intersections without slowing down – and permits the more efficient rolling stop that cyclists are doing anyways.

While this author would love to only have to yield at stop signs, it’s hard to come up with a compelling reason why creating a “stop as yield” is in the public interest without making cyclists sound lazier than the commuters driving alongside them. Frankly, some of the reasons given by cyclists in favor of this rule seem a bit weak:

Cyclists should be able to avoid the pollution of stopped cars as much as possible.

Perhaps the best reason for changing the law is that almost no cyclists stop fully at stop signs. The law doesn’t work, so it needs to be fixed.

What do you think? Should bicyclists need to stop at stop signs?