Should You Get the Guacamole on Your Burrito? A Price Analysis of Your Favorite Foods 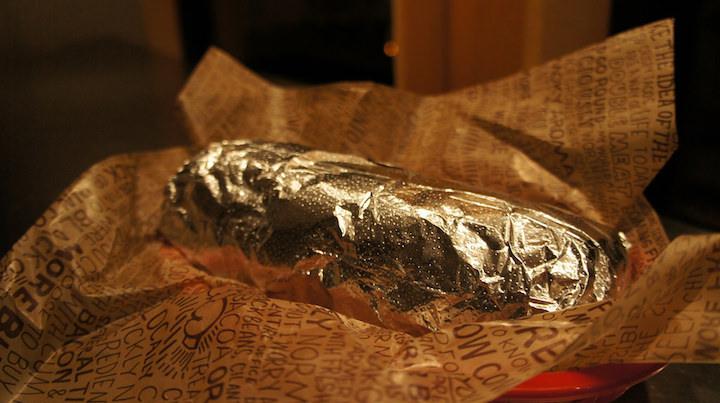 The restaurant business is notoriously tough, and owners have a myriad of costs ranging from health permits to commercial rent.

On average, 30% of a restaurants revenues go to labor costs, 30% goes to general overhead, and 30-33% is spent on ingredients. Making a decent profit in the restaurant industry is a high hurdle. As a consumer, when eating out you’re paying for a lot more than just the food; it’s the excellent waitstaff, unique ambiance, convenient location, in addition to the delicious dish that makes for a memorable experience. In order to cover all of these costs and still make a slim profit (generally 3-5%), restaurants need to mark up ingredients on average 300%.

But some items offer dramatically different margins than others.

We decided to analyze data from Priceonomics customer Plate IQ, a company that processes invoices for thousands of restaurants, and has unique access to the actual costs of the raw ingredients that go into our favorite foods. We decided to use our data to look at five common food items: the hamburger, the burrito, the pizza, the omelette, and the Cobb salad. For each item, we focused exclusively on West Coast prices, and analyzed two variations.

Here’s what we found: The markup you pay for a given item ranges anywhere from 155% to 636% — and generally, the higher-end meal you purchase, the better the deal you’re getting.

First, let’s take a look at an American classic: the hamburger. 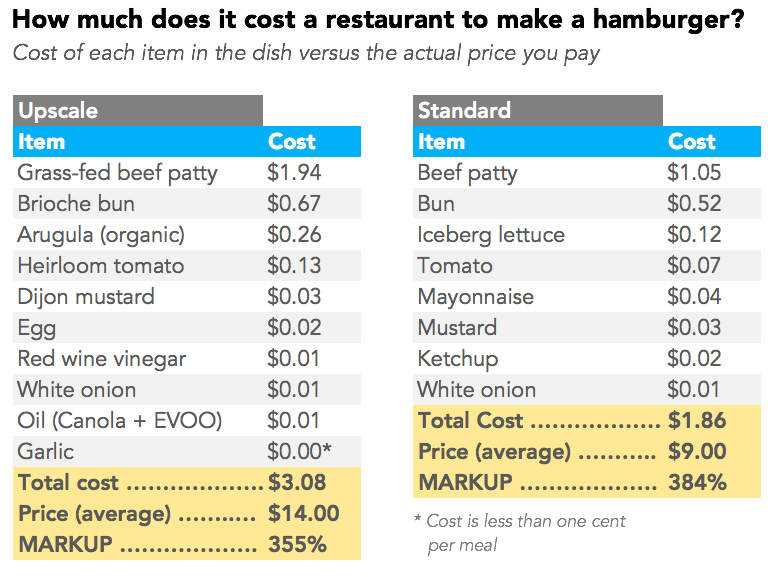 For example, the restaurant we surveyed bought its ground beef for $4.20 per pound. That means each quarter-pound patty (the standard in a burger) costs them $1.05 to produce. Onions are dramatically cheaper, at $16.87 for 50 pounds — or only slightly more than one cent per burger. 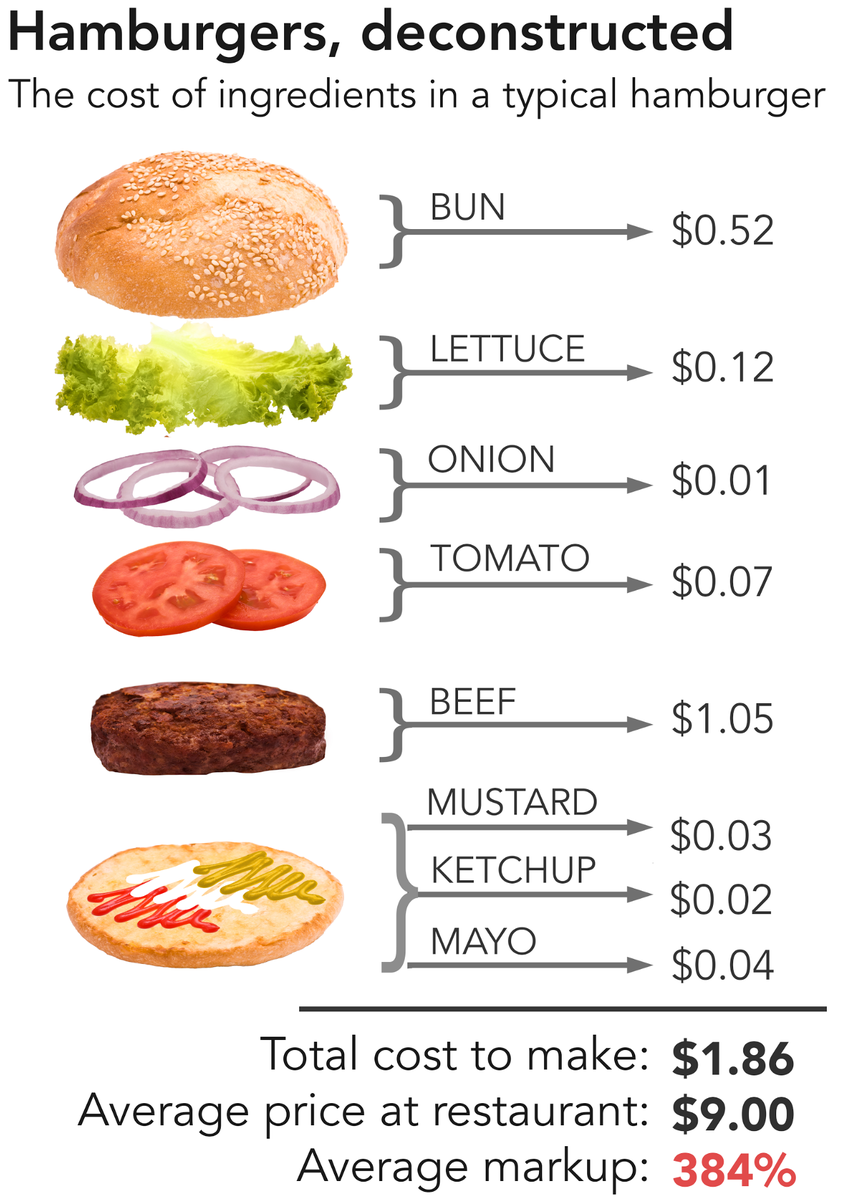 How does this stack up against other popular food items

Let’s turn to another item that is probably just as ubiquitous as the burger on the West Coast: the burrito. 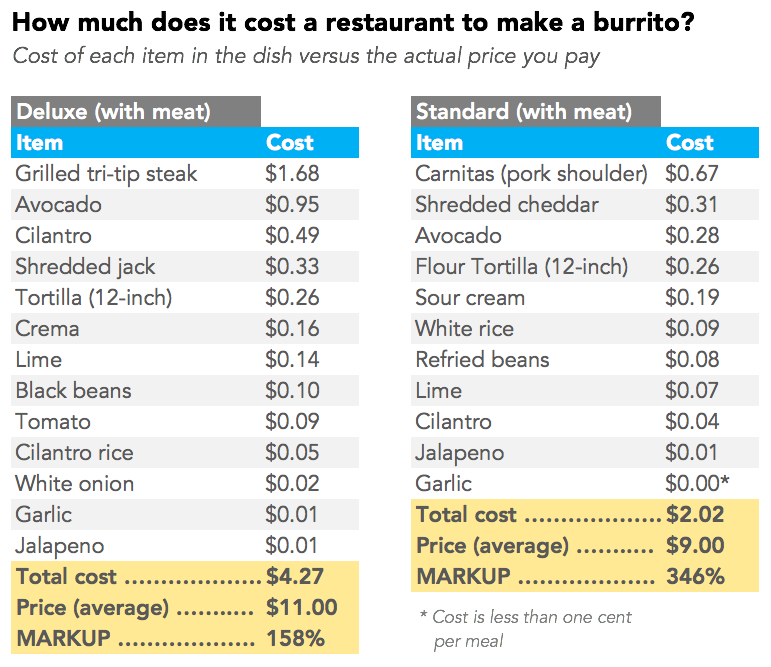 The Cobb salad tells a similar story: the higher-end farm to table version has a much lower markup than the standard salad. 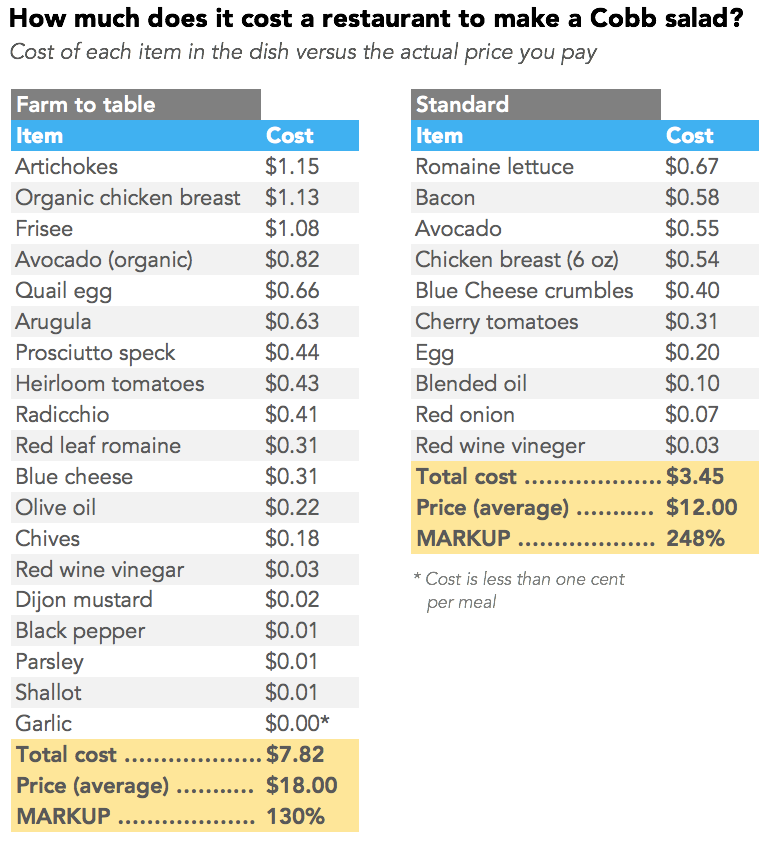 The standard Cobb salad, on the other hand, costs only $3.45 to make and has a 248% markup. In general, it seems salads are far less profitable for restaurants than more substantial, meatier options.

So far, we’ve seen that the markup of food items generally does hover around (or far below) the 300% standard. But several items we looked at FAR exceeded this.

Take, for instance, the omelette: 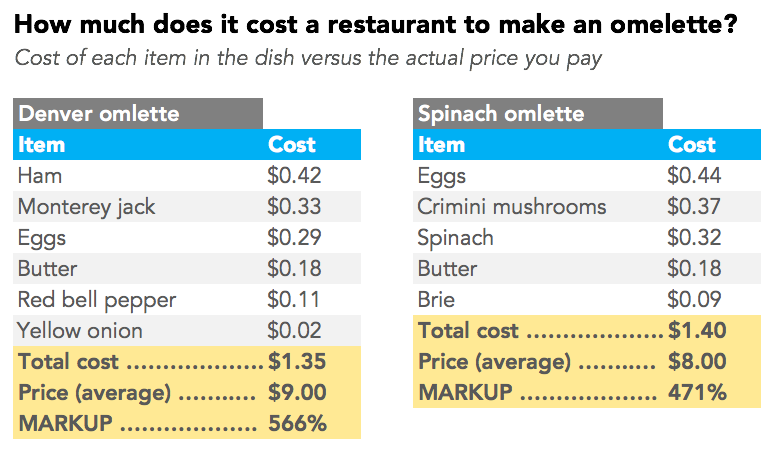 We looked at two variations of the omelette: a standard spinach option, and the Denver omelette, which contains ham and cheese. Both had much higher markups than the other items we’ve looked at so far.

But the true king of marked up dishes? The pizza. 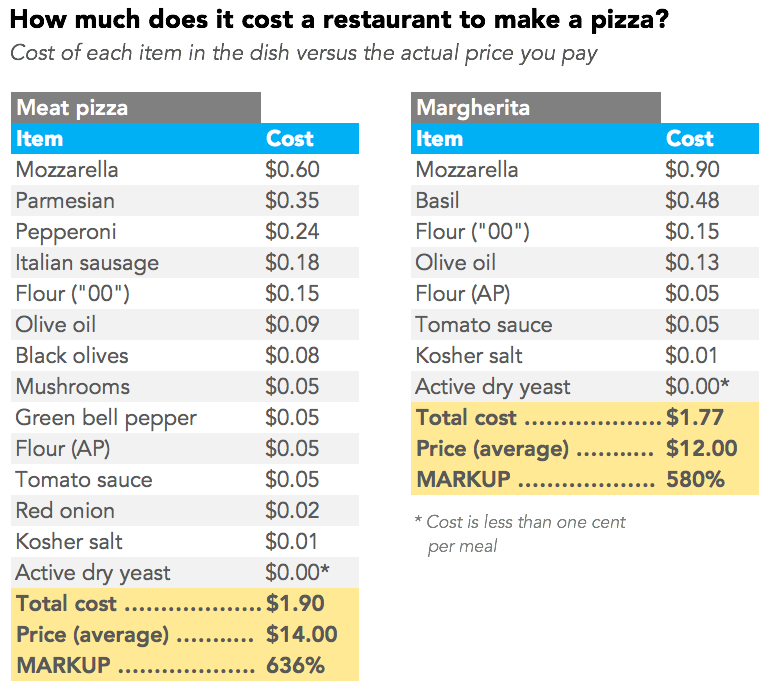 A big contributor to these huge markups is the incredibly low cost of making the crusts. A pizzeria can buy a 50-pound case of flour for around $15. This works out to around 20 cents’ worth of flour per pizza. The yeast costs less than one cent per pizza.

Lastly, let’s take a look at the price of some popular add-ons. Is it worth it for you to get something like sour cream added to your burrito? 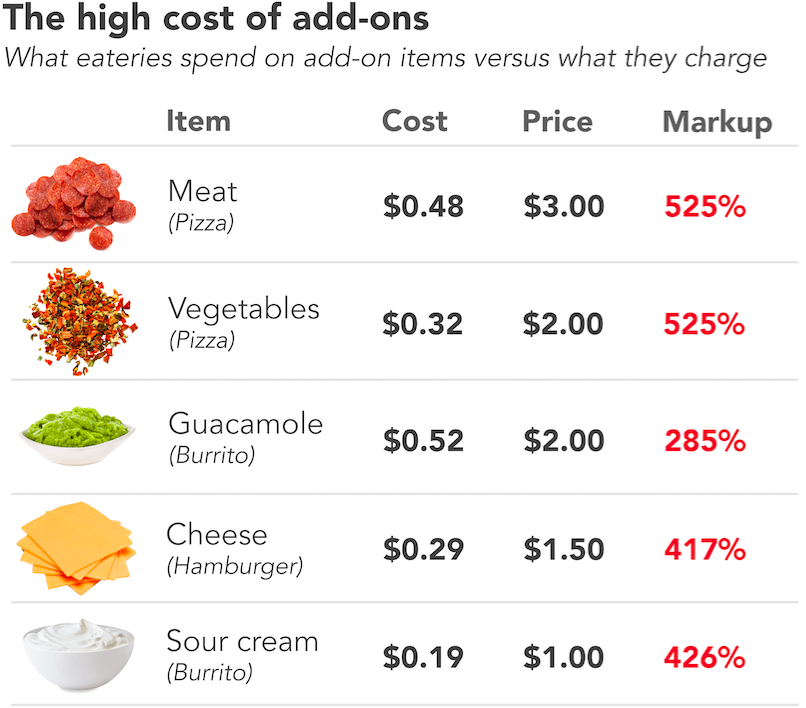 Add-ons generally tack on an additional $1 to $3 to the price you pay. For the restaurant, these add-ons typically don’t cost them very much to purchase. 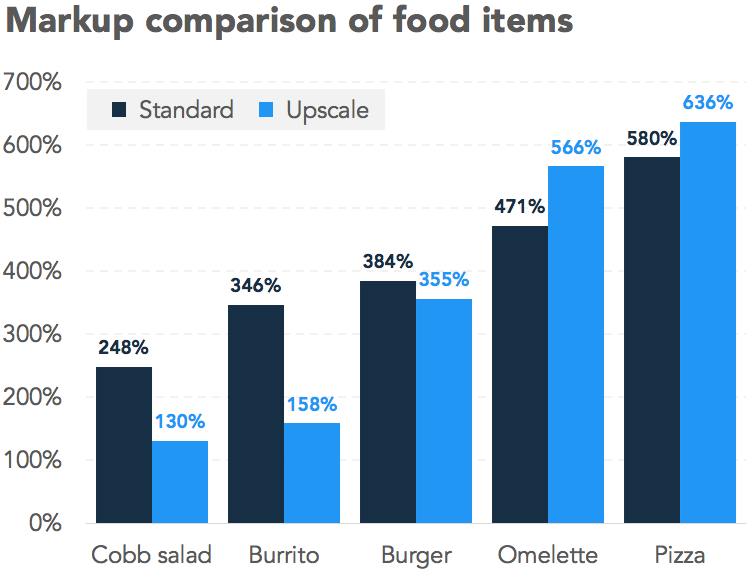 Aside from the fact that restaurants have to cover their operational costs, there’s a reason we pay more for food than what it’s worth in its raw form: the experience.

For the first time in recorded history, Americans are spending more at restaurants ($54 billion) than they are on groceries ($52 billion). It’s fun to eat out — and most of the time, that makes paying a 400% markup for a burger worth it.

Note: If you’re a company that wants to work with Priceonomics to turn your data into great stories, learn more about the Priceonomics Data Studio.  Cover photo by Flickr user Aranami.