Should You Literally Pick the Low-Hanging Fruit? You’re a salesman, and it’s your first day on the job.

“I’m…I’m not really sure where to start,” you sheepishly tell your mentor, Johnson. “How do I land my first sale?”

“Look here, kid,” says Johnson, leaning in close, with a hand on your shoulder. “You’ve got to go after the easiest customers first. You’ve got to pick the low-hanging fruit.”

The Oxford English Dictionary defines “low-hanging fruit” as “a thing that can be won or obtained with little effort.” In the business world, it’s not just an idiom — it’s a way of life, a philosophy: “Think of your business as an orchard,” writes one textbook. “The ability to spot low-hanging fruit is your livelihood.”

Generally, businessmen and marketers refer to low-hanging fruit as a good thing — a quick fix that produces ripe, delectable results. We were curious: Does this actually hold any credence? In the real world, is picking the low-hanging fruit truly a good idea?

Here’s the truth, according to fruit pickers, orchard owners, and plant geneticists.

Tracing the Origins of “Low-Hanging Fruit” 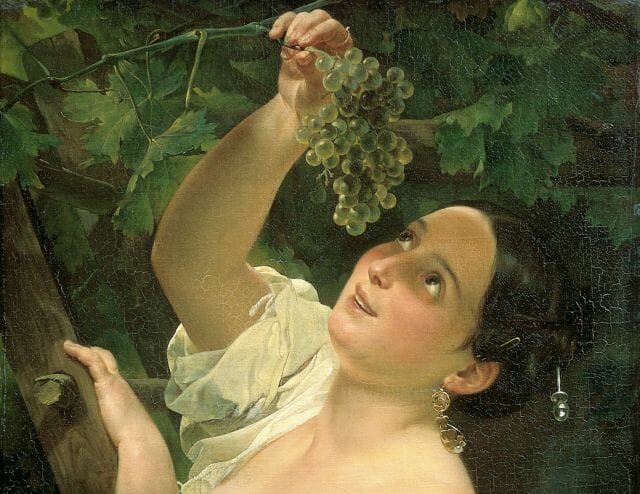 Tracing the origins of an idiom is typically a fruitless endeavor: it is difficult to pinpoint, with certainty, where a particular phrase originated. Despite this, we embarked on an exhaustive search of archives and databases (JSTOR, LexisNexis, Google Books, Google Scholar, New York Times archives) to find the first metaphorical usage of “low-hanging fruit”.

The earliest recorded instance we could find of the exact phrase* dates to a 1968 Guardian article by writer/poet P.J. Kavanaugh. Here, he used it to describe something easily attainable:

“His work is so appealing to me that I feel almost bashful praising it… He is gentle and stoic and simple, his rare images are picked aptly, easily, like low-hanging fruit, and though he appears to move short distances slowly he really moves far and fast.”

From there, the phrase seems to have appeared in isolated spouts. It was used in a 1974 academic paper on the welfare of farmers (“We use the cheapest sources of power until they begin to rise in price,” wrote author Philip Raup: “We have picked the ‘low-hanging fruit’ first”), then again in a 1981 water policy proposal (“The problem of scarcity…is a result of picking the low-hanging fruit first”). Through the mid to late 1980s, the metaphor was enlisted sparingly, in reference to everything from waste reduction to international crises.

Then, around 1992, something odd happened: “low-hanging fruit” was sucked up into the wild world of business managerese. Seemingly overnight, it became a buzzword for a “no brainer opportunity” — a corporate gain that could be achieved easily, with very little effort.

A search of The New York Times archives for “low-hanging fruit” shows the massive rise in popularity of the phrase throughout the 1990s and mid-2000s: 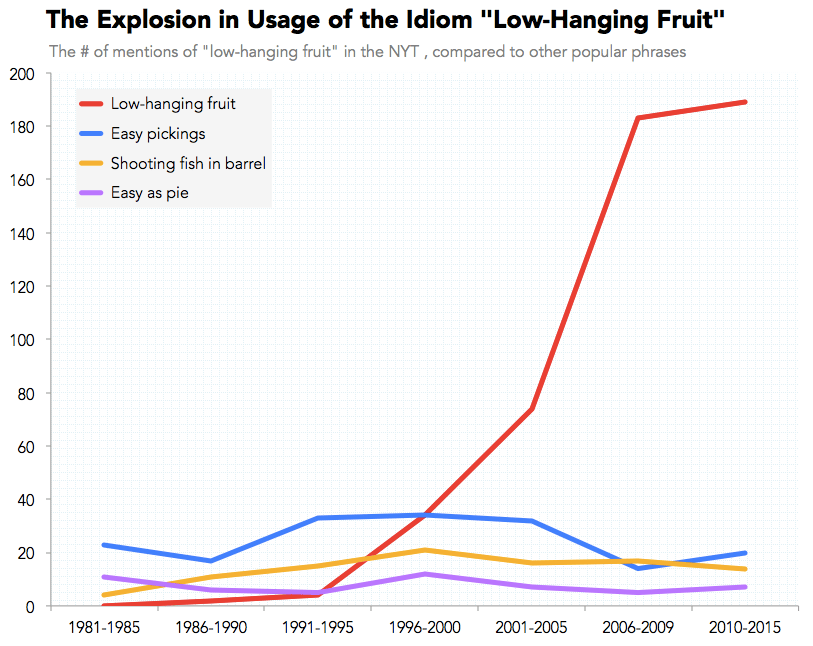 Today, “low-hanging fruit” is as strong as it ever was. A search of recent news stories on Google reveals some 15-20 mentions of the phrase every day in publications across the web — most of which come from Bloomberg, Forbes, WSJ, and other business-oriented sites.

Almost always, “low-hanging fruit” is used to signify something that is an “easy target” — something within reach that can be accomplished with minimal effort and yields very favorable, short-term results.

“Low-hanging fruit is something visible — bad quality, unnecessary overtime, wasted materials — that we can get our hands on right away, something that doesn’t require an accounting degree to understand,” one businessman explained to Fast Company. “That’s the obvious place to start in business.”

But there’s just one problem with that: according to apple growers, picking low-hanging fruit is a terrible idea.

The Fallacy of Low-Hanging Fruit 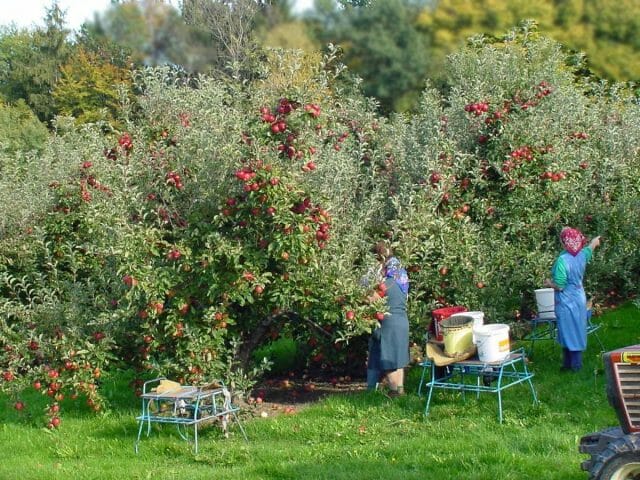 Henry Rueda has spent the better part of 30 years picking apples in orchards around Yakima, Washington. So what does he think of the idiom?

“It does not make any sense,” he tells us over the phone. “You always need to start by picking apples from the top [of the tree]; never the lowest-hanging fruits first. Real bad idea.”

Rueda’s rationale is simple: To reach the top of the trees he harvests from, he must climb a ladder. Typically, as he goes, he carries a bag wrapped around his neck and shoulder, in which he dumps his fruits. If he were to pick the low-hanging fruits first, he would have to work his way up the ladder with an increasingly heavy load. So, from a production standpoint, picking the low-hanging fruit first is actually much more challenging.

“Growers frown on fruit pickers who only pick the low-lying fruit,” corroborates Glen Lucas, General Manager of the British Columbia Fruit Growers’ Association. “To be equitable, a harvester of tree fruits should pick the entire tree, and not leave the difficult, less productive picking to others.”

Furthermore, picking low-hanging fruits instead of those higher up could have a detrimental impact on the ecosystem. Dr. Gennaro Fazio, a plant breeder and geneticist with the USDA’s Agricultural Resource Service tells us why:

“In taller apple trees, the fruit that is high up, exposed to the sun, ripens the fastest. Low-hanging fruit doesn’t get much sun, and it’s not as ripe — not so delectable, you could say — as the higher fruit. You want to pick the low-hanging fruit last, so it has more time to develop.”

But according to Fazio none of this ultimately matters: the idiom “low-hanging fruit” has been rendered totally and utterly irrelevant by the changing nature of apple tree genetics. 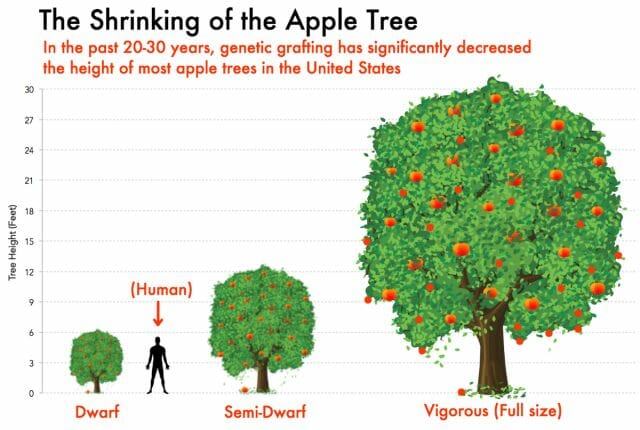 For centuries, apple growers have grafted together the roots of stronger trees with the delicious fruits of more productive trees to create hybrids — trees that combine the best of both qualities. About a century ago, in the early 20th century, a team of scientists and entomologists began grafting apple branches onto “dwarfing rootstocks”, creating highly productive trees that maxed out at around 5 to 7 feet in height.

Once hesitant that the smaller trees wouldn’t produce as much fruit, apple growers realized dwarf trees were actually far more profitable. “Farmers get a higher yield per acre,” says Heather Faubert, of the Rhode Island Fruit Growers Association. “With the taller trees, you could only plant about 20 trees per acre; now, you can get as many as 2,000 in the same space.”

The result of these smaller trees is that the lowest-hanging fruits are actually no longer the easiest to pick. In fact, picking them requires repeatedly bending over to knee-level, a maneuver that can prove incredibly straining on the lower back.

“The ergonomics of picking apples have completely changed,” says Fazio. “It really no longer makes sense to go for the low-hanging fruit. The phrase is irrelevant.”

*Note: While the 1968 Guardian article is the first metaphorical instance of “low-hanging fruit”, it was preceded by other variations of the same phrase (“fruit low hung”; “fruit, hanging low”; “low-hanging boughs”) in poems dating back to the early 17th century, usually in reference to love.

In our next post, we take a look at dishes that were once in vogue, but no longer on modern menus. To get notified when we post it →  join our email list.