Some Artists Are Big in America, Some Internationally, and Some Are Taylor Swift 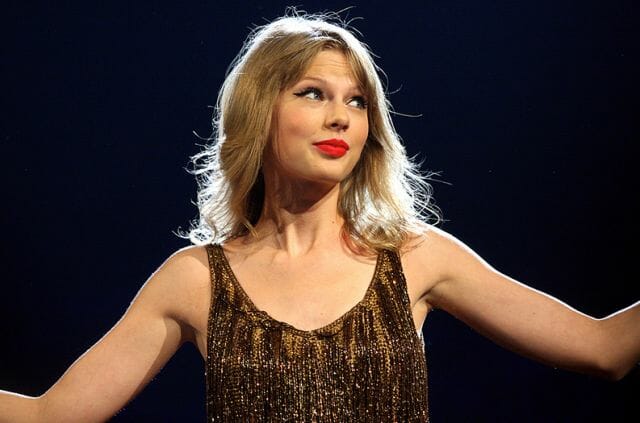 These days, it seems the answer to every question concerning pop supremacy is Taylor Swift. She makes the most money, sells the most albums, and holds the most power with tech giants. In our data dive to understand which artists appeal most to American audiences versus most Global ones, we found more evidence that Taylor Swift always wins. Even if America’s dominance of the international pop music market is supposedly declining, she is huge both in the United States and across the world.

But not everybody can be Taylor. We analyzed Spotify data and found a surprising number of artists that were huge internationally in 2014, but didn’t made a big dent in the US, and vice versa. Massively internationally popular musicians — like Belgian singer Stromae (he of the 267 million Youtube views for his biggest hit) and British superstar Robbie Williams — have long found it difficult to “Break America.” Our analysis suggests that Hip-Hop artists may be having the opposite problem: they’re superstars in America, but not abroad.

So let’s take a look at which artists are cross-cultural hits, which ones aren’t, and which ones have achieved Swiftian levels of global domination.

We crawled data from the Spotify streams charts from 2014, to get a sense of where which artists were popular. As Spotify has expanded globally, Spotify streaming data has become an excellent resource for getting a sense of what music the world is listening to. In 2014, there were 36 countries across North and South America, Europe and Asia.

In each of these 36 countries, the top 50 songs in any given week each had over 1,000 listens. Our data only includes streaming statistics from the first week of each month, so an artist might have reached a higher spot on the charts in a week for which we do not have data. We don’t believe this significantly impacts our insights. Only songs that debuted after the first week of 2014 were analyzed.

We were interested in looking for three distinct types of 2014 pop success:

– First, the artists who are Big in America + Internationally.  We define this as those that had top 10 hits in the US and had songs that appeared in the top 10 in over 10 countries.

– The third are the artists that are Big Internationally – But Never Charted in the US.  These artists reached the top 10 hits in at least 5 countries, but didn’t even reach the top 50 in the US.

The chart below shows all three groups, each of which we will look at independently. 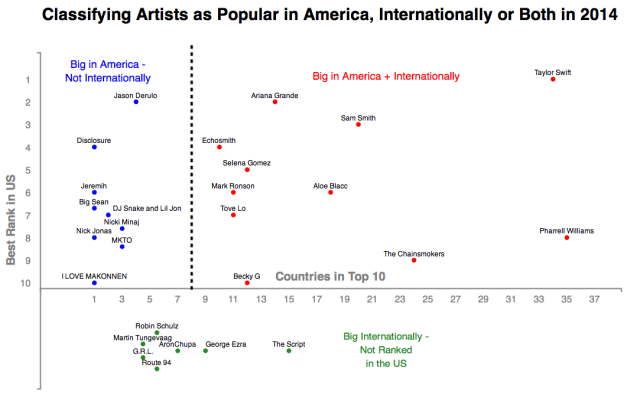 The chart below shows the first group of artists with Michael Jackson-like US and international success. This is (yet another) opportunity for Taylor Swift to shine: In 2014, she had a number 1 hit in the US, and had songs in the top 10 in 35 of the 36 countries in our dataset. 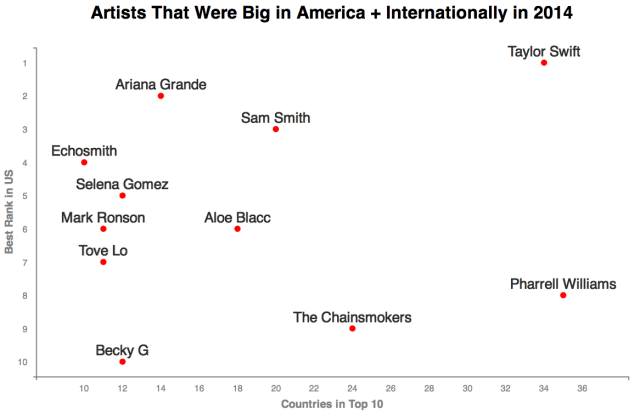 It’s no surprise the we find Taylor Swift at the very top right. She is the sole artist to both be number one in America, as well as the top 10 in more than 20 other countries. Big-piped singers Sam Smith and Ariana Grande are the only others that came close.

Of the nine artists in this category of success, there are six Americans, two Brits, and one Swede. Swedish people have developed a real knack for making pop that appeals to Americans.

Big in America – But Not Internationally:

The next chart highlights those acts that made it big in America, but whose allure escaped the rest of the world. Except for the club grooves of Disclosure, all of the artists that are most specific to American tastes had hit songs with a hip-hop beat. Hip hop has historically been more popular in the United States than it has been globally. Perhaps this is because genre: (a) is native to the United States, and (b) emerged more recently than the pop and R&B (which succeed at high levels globally). 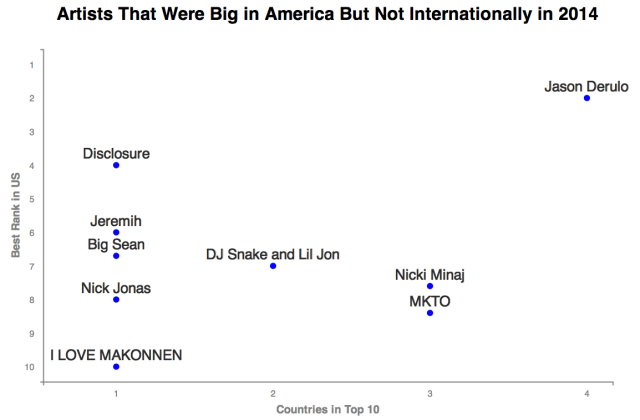 Big Internationally – But Not in the US

Last, there is the group of seven artists that didn’t make the top 50 in the US in 2014, but reached the top 10 in at least five other countries. We had never even heard of the Irish pop band The Script, whose international megahit “Superheroes” hit the top 10 in 15 countries, and charted in the top 50 in every country but the United States. George Ezra, second on the list, may be more familiar than the others on the list to American readers. In 2015, the U.S. market finally relented to his 3-chord charms and he soared the charts. Have hope AronChupa and Route 94.

It is probably no coincidence that five of these seven artists had their biggest hit with a dance track. Although dance music’s popularity has been increasing in the United States, Americans have been late to embrace the genre. Americans seem want to dance to a hip hop beat, while the rest of the world enjoys a techno one.

It seems that, for many artists, pop superstardom was not as global as we expected it to be. In 2014, hip hop artists like Jeremih and Big Sean didn’t even find their way to the top 10 most streamed songs in any country but the US. Conversely, some of the world’s most popular hits in 2014, particularly dance tracks like AronChupa’s “I’m an Albratraoz,” don’t even make the top 50 most streamed songs in the US. But if there’s a single shining beacon of pop, in the adoration of which the world stands united, it’s Taylor Swift.