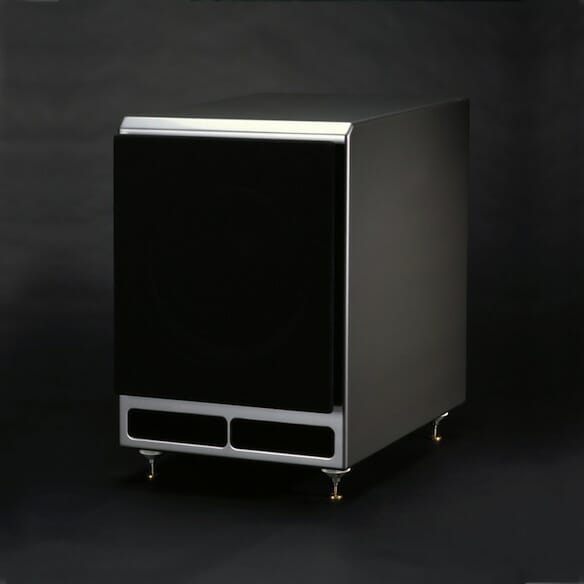 Wikipedia defines the subwoofer as being first designed by Arnold Nudell and Cary Christie, with the servo-static 1 speaker for home use, which spawned one of the best speaker companies: Infinity. What Wikipedia fails to state is that this design was a response to a speaker with a servo motor applied to effect the maximum travel of the speaker cone, unattainable by passive means, similar to the ServoDrive speakers.

Among the developments of the search for ultimate bass response was a 60”diameter speaker. Though versions of the servo motor-driven speakers still exist, and achieve spectacular performance specifications, the home subwoofer industry followed the Infinity model, and subwoofers for the home became available in the 1960s.

The need for auxiliary bass performance was created by the development of electrostatic speakers, which require high amperage to drive their magnetic fields, and the high performance in their upper and middle registers left something lacking in the bottom end. Infinity began to install a traditional woofer on their electrostatic speaker arrays before separating the enclosure altogether.

Subwoofers became popular in theater sound systems in the 1970s, and were first used in an audio recording session by Steely Dan, on the album Pretzel Logic. Subwoofers were incorporated into surround systems for theaters and introduced to the public in the 1974 film, Earthquake. The designs required high power (arrays of 500-watt amplifiers) to provide the 110-120 decibel output and signaled the design of the crossover, a device that allocates a certain percentage of power to each of the high, mid and low range speakers to provide balance.

Today subwoofers are manufactured for myriad applications, for computer speaker systems, for automotive audio, for professional sound reinforcement in arenas, and for home applications. Priceonomics will try to identify the appropriate subwoofer for your home audio application.

As bass frequencies are often described as being “felt,” rather than heard, subwoofer manufacturers realized that splitting bass response into two channels resulted in little differentiation between the right and left channels, and focused on providing a single center channel bass speaker to augment the higher registers described by the main speakers. Though there are still two-channel subwoofer systems available (magnepan, for example), the standard is a single downward or front-projecting large cubic enclosure. Speaker horns are included in some enclosures.

Reputable speaker manufacturers such as Polk, Klipsch, Infinity and JBL offer a diverse product selection, with any number of entry-level choices. The Polk Audio CSR is a passive, video-shielded three-speaker enclosure (two 5-1/4” woofers and a ¾” dynamic balancing tweeter) that boasts a frequency response of 55-20,000Hz for around one hundred dollars. For slightly more, their TSi CS10 provides a larger tweeter, at 1”, eliciting a frequency response of 53-25,000 Hz. Polk active subwoofers are available under $300, with their PSW 111 (frequency response 38-250 Hz), a single-speaker unit with integral crossover and amplification. The Polk C SW104, at roughly $1300, is considered a passive speaker, because the 500-watt power amplifier it comes with is outboard, and the speaker is designed to be built in to a wall. It attains a frequency response of 36-120 Hz. Polk recommends installing them in stereo for optimum bass response.

At this point attentive readers may be asking themselves the question, why do higher-end subwoofer systems have less range in their response? The answer is simple, if not obvious: The more carefully tuned bass response mechanisms isolate the bass frequencies, not a wider spectrum of sound. Thus the more finite the range, the more specifically rendered are the bass frequencies.