Survey: Which Data Skills Do You Need to Get Ahead in the Next 10 Years? 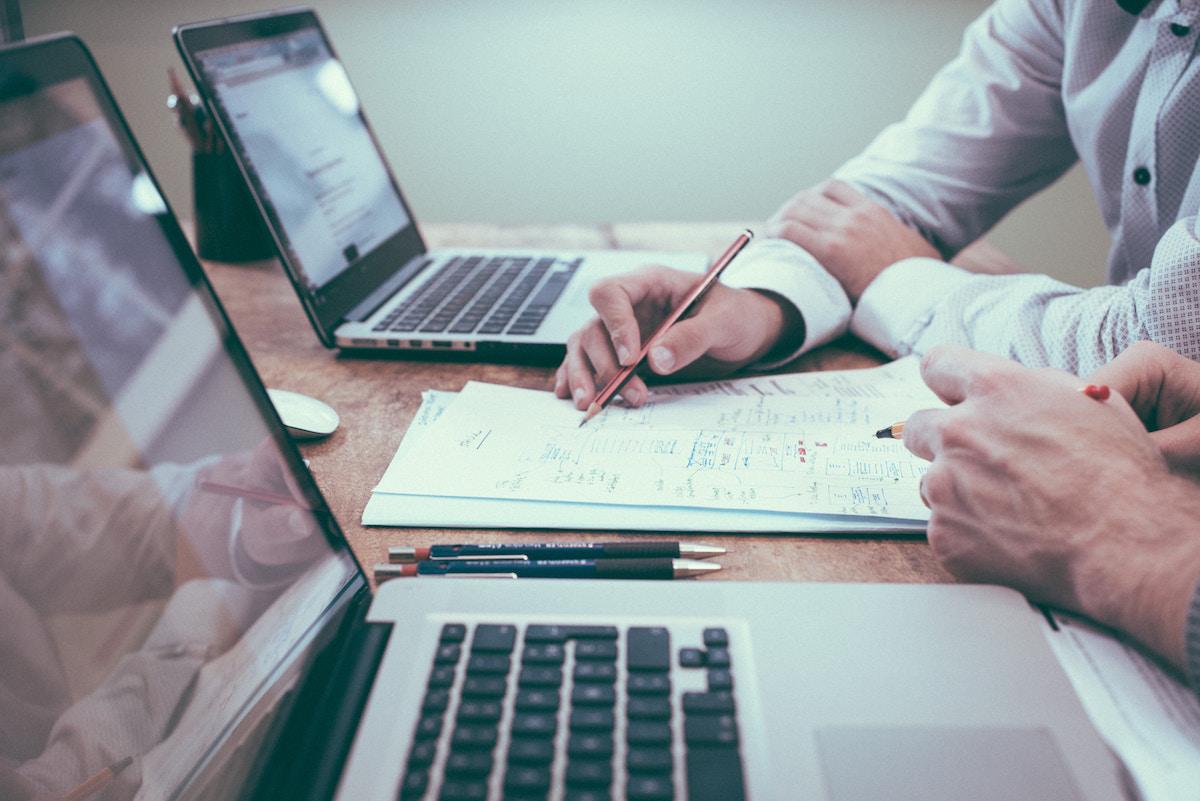 In 2011, entrepreneur and venture capitalist Marc Andreessen famously posited thatsoftware is eating the world. His point was that nearly all industries are being upended by software and as a result, the seemingly safe jobs of senior executives could evaporate unless they adapt with the times.

Today, data is eating the world. Artificial intelligence, machine learning, the internet of things and data analytics are creeping into companies across the globe, and being data literate will be table stakes for business leaders. In this article, we aim to document the growing belief among senior business executives that learning data skills are critical to their jobs and future career advancement.

Earlier this year, Splunk commissioned a survey of over 1300 global business leaders to help determine just how important data skills are, which countries value them the most for career advancement, and which skills in particular are most prized.

The survey found that well over 80% of executives say that data skills are required for promotion in their companies. Of all the countries analyzed, executives in China said their companies valued data skills the highest. However, while many executives noted data literacy was critical for advancement, the survey shows that many executives are actually resistant to learning new data skills. Why? When asked, many business leaders simply stated they were “too old” to learn, which was another way of saying data is hard

The value of data in the enterprise is multifold. The Economist has declared data to be the world’s most valuable resource while Forrester states it’s “the new currency of business.” When asked, executives in the survey tend to agree; data drives organizational success on multiple vectors: 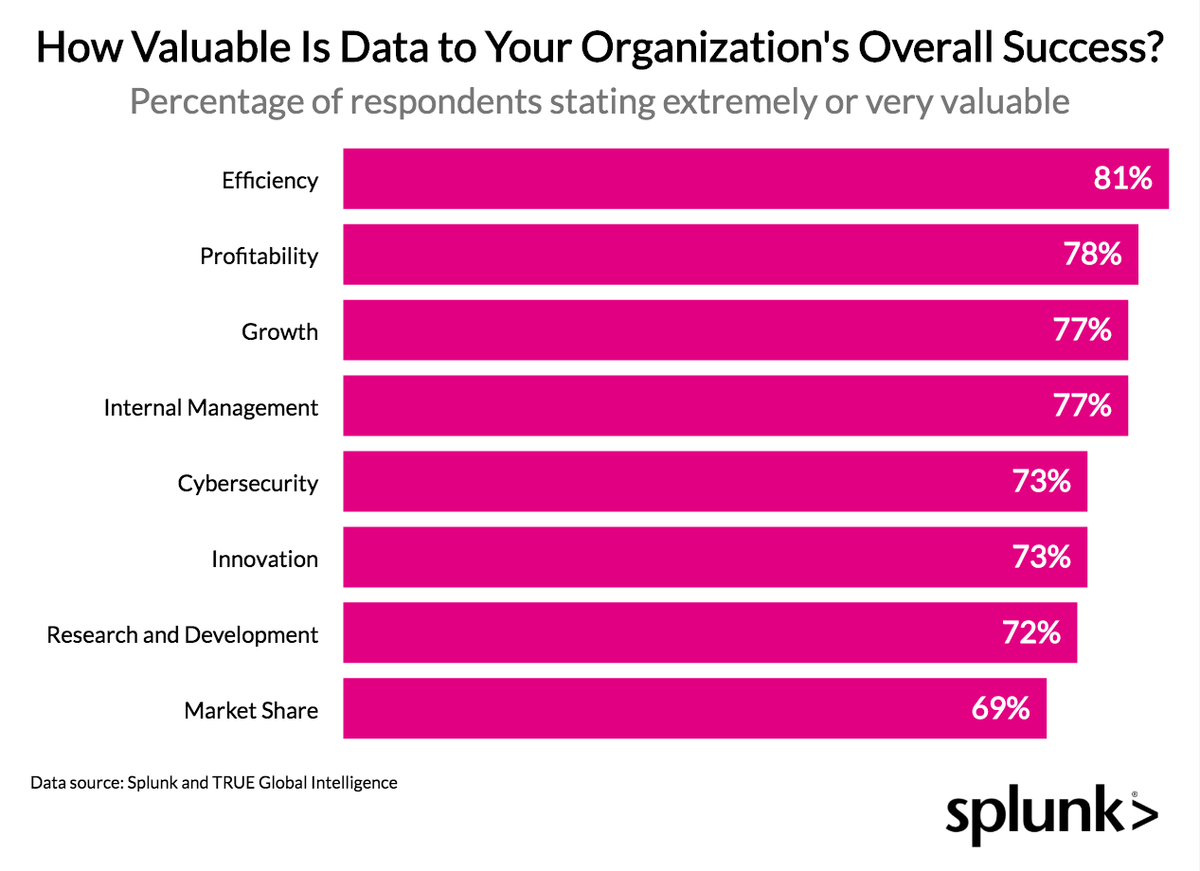 In nearly every aspect of management, data is rated as extremely or very valuable. While data has traditionally been used to drive efficiency, the above chart hints at its emerging use cases for identifying growth and innovation, as well as a cybersecurity line of defense.

It’s potentially challenging to get 80%+ of executives to agree on anything, but the survey reveals that business leaders think data skills are now a requirement for becoming a senior leader and those skills will only become more valuable over time. 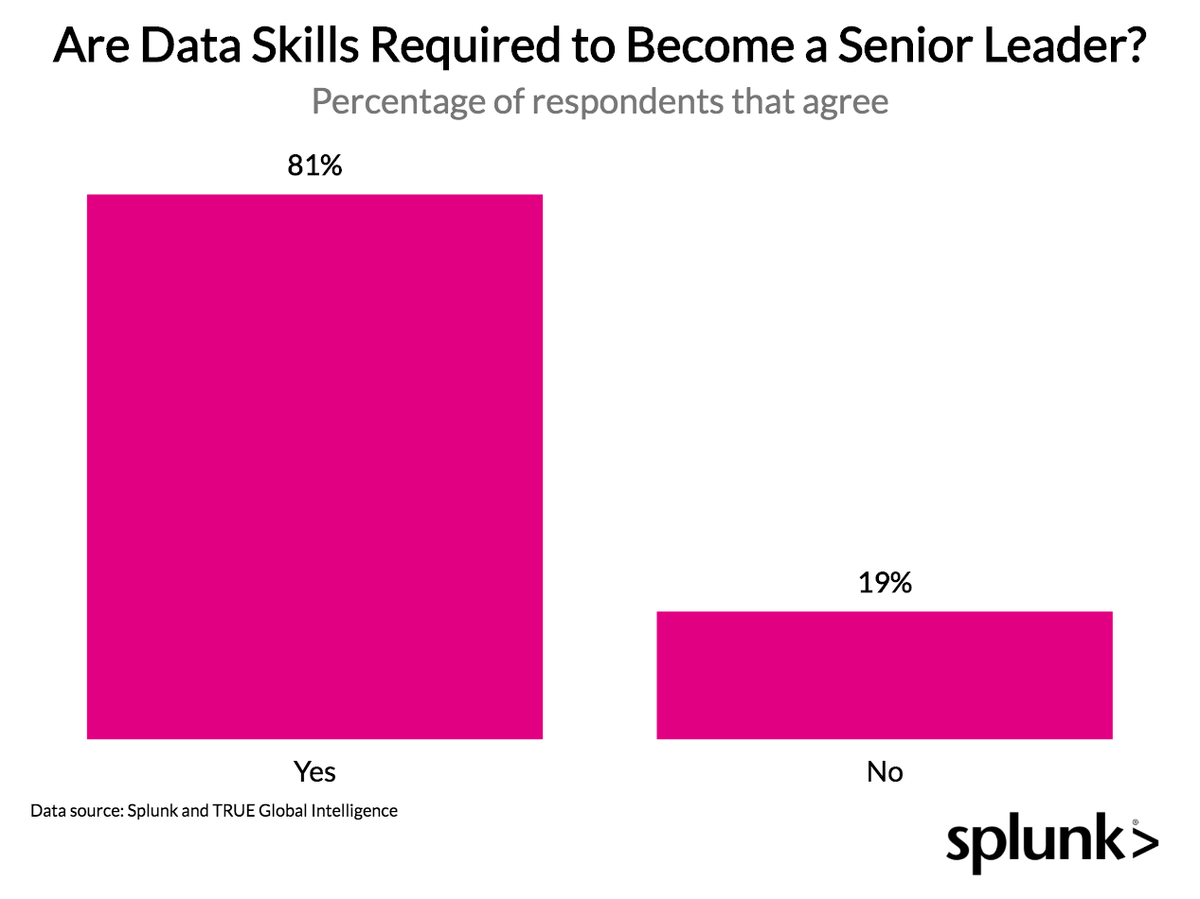 The survey also looked at geographic variation in how business executives view the value of data skills. Is data literacy disproportionately a requirement for success in one country versus another? 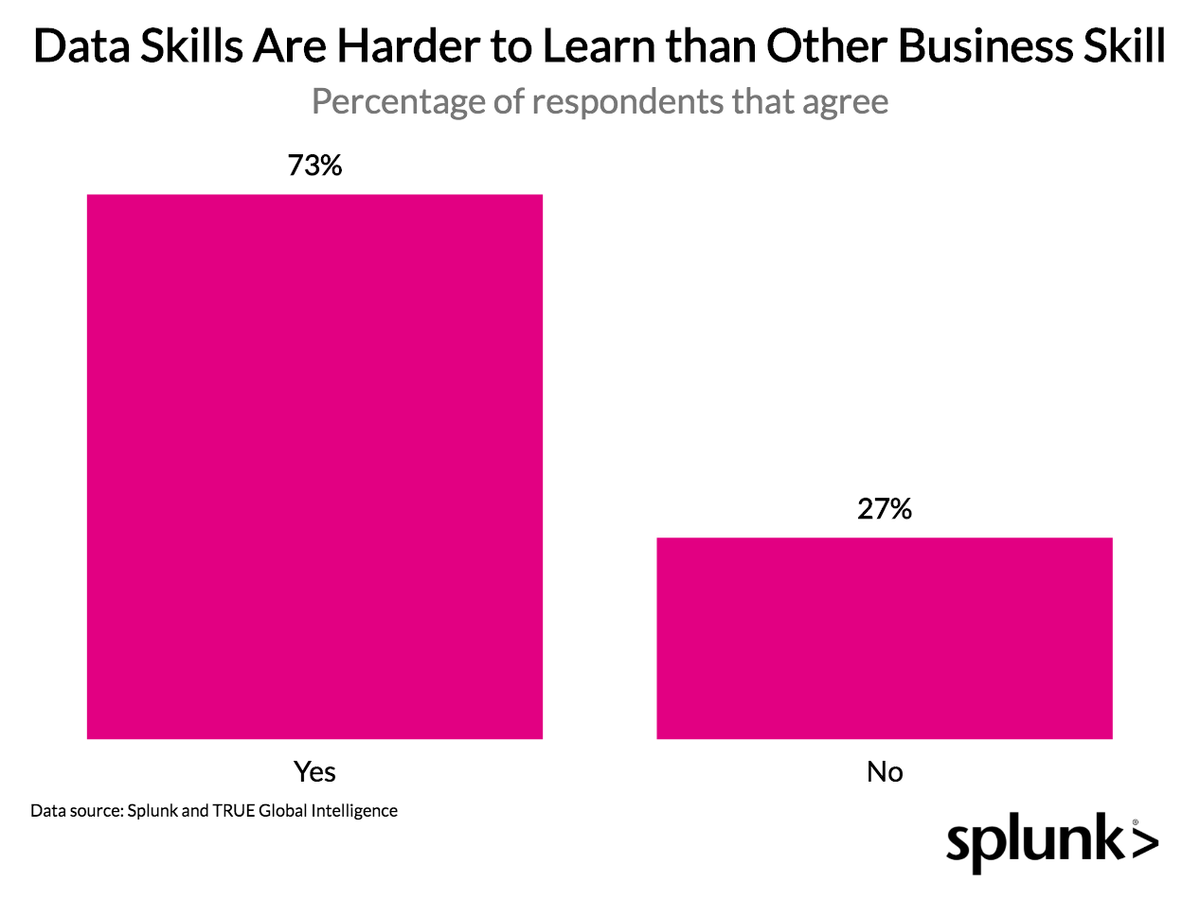 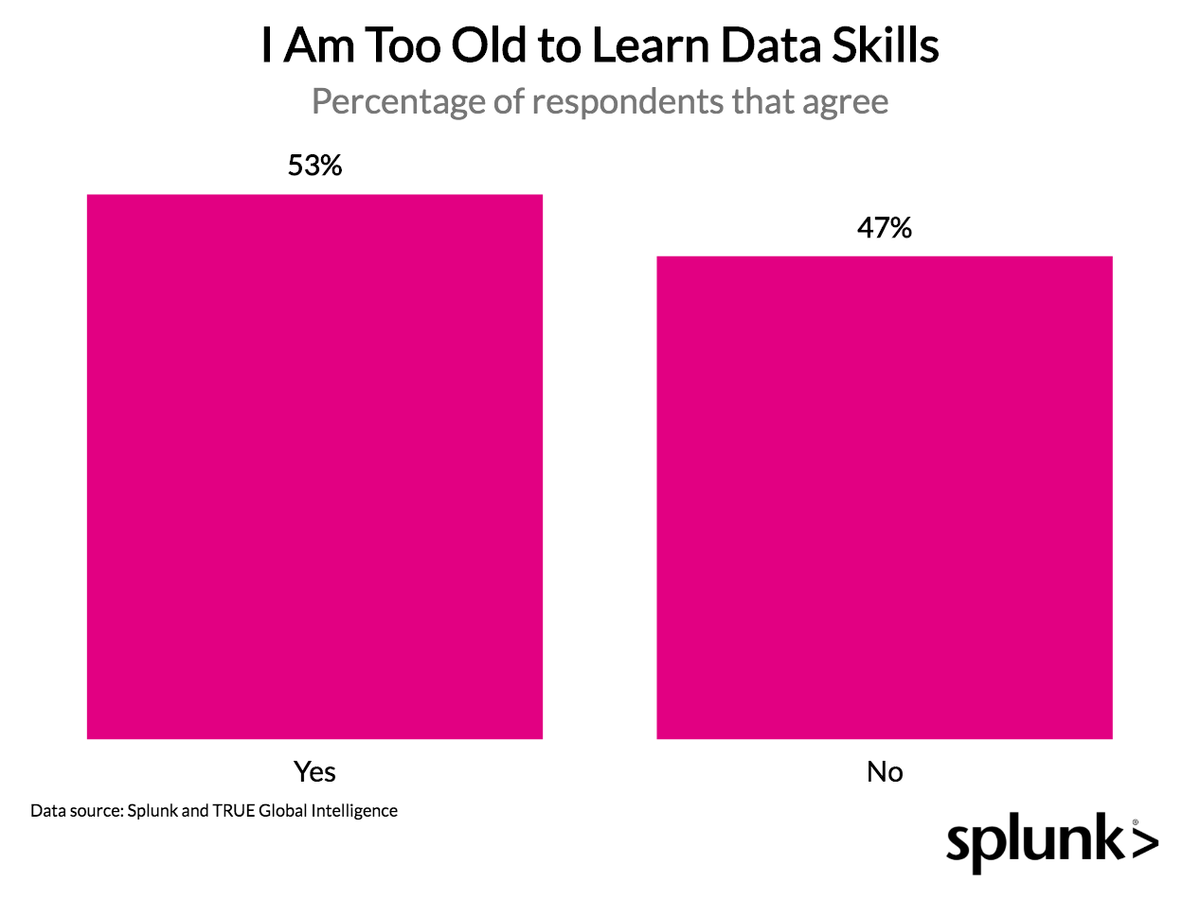 On each question regarding the value of data skills, Chinese business leaders scored highest on emphasizing its importance. Over 90% of respondents in China noted that they need data skills to get promoted and that data literacy was a requirement for entering senior management. Even for  general office work, 88% of respondents in China noted that data skills were a requirement. If data skills are table stakes for competing in the global economy in the future, Chinese businesses are foremost in recognizing this education need.

Just what does it mean to be data literate in the modern enterprise? Data literacy can be split into two different components: hard skills such as using programs to analyze the data and soft skills such as using judgment to visualize and interpret the data. Hard skills involve working with data sets and using programs to produce results. Softer skills are often built up over time by practicing your hard skills and gaining a judgment around how to interpret and confidently lead data-driven teams. 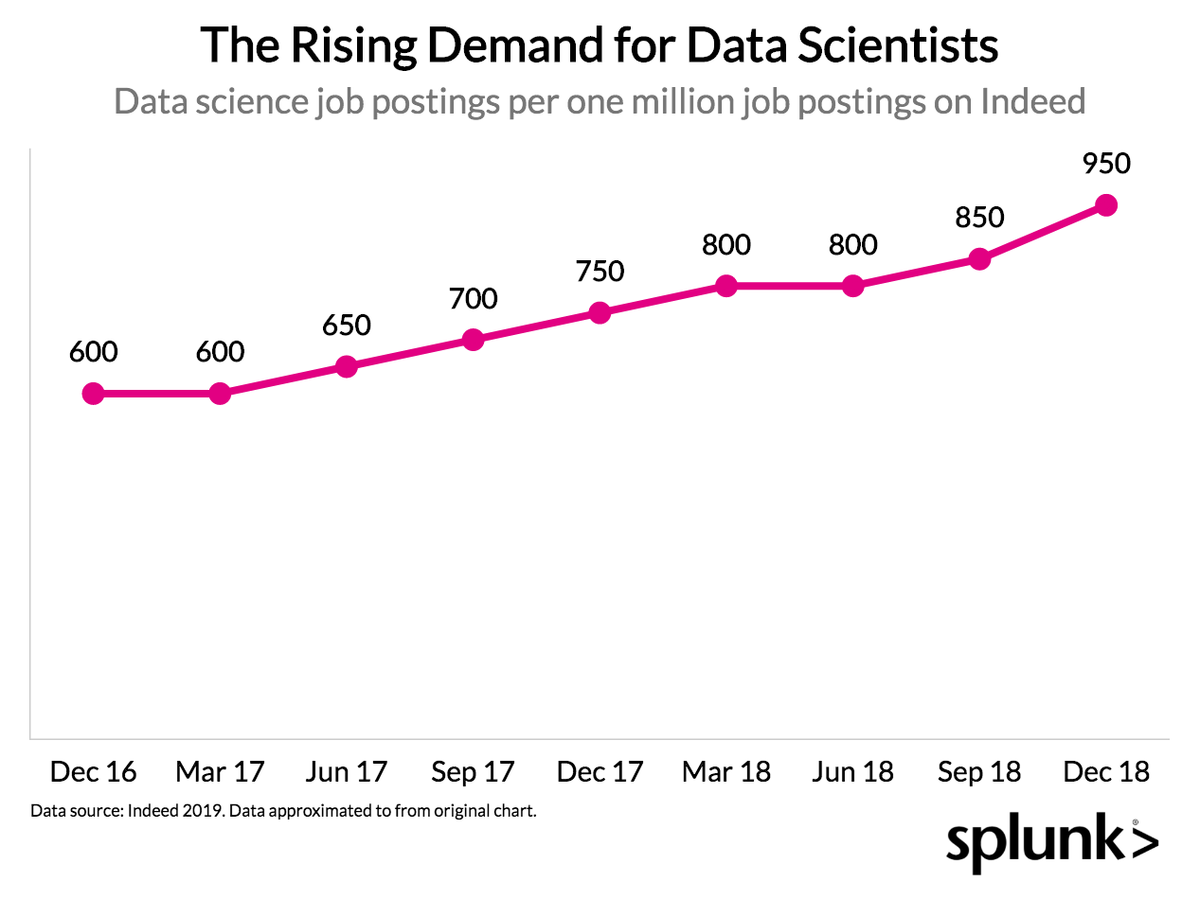 Executives know they need to pick up data skills to stay competitive in the workplace yet resist doing so because of the perceived difficulty. For companies, investing in data skills training programs is a way to upskill their workforces with skills that executives may not pick up on their own.

The demand for data skills in the enterprise continues its inexorable rise. If a company’s existing workforce is slow to pick up data skills, companies look to external hires to fill the gaps. This trend is evidenced by job sites where data-related positions are skyrocketing. On LinkedIn, data related jobs dominate the “fastest growing jobs” lists.

On the Indeed job search engine, the growth in data-related job postings continues. One proxy for this is to look at the rate of job postings for data scientists, which has grown over 50% in just the last 2 years:

While data science jobs get a lot of publicity as a “hot career,” the reality is data science is not the only data-related career with high growth and demand. Dataquest, a data learning company, notes that jobs as diverse as operations analyst to digital marketing manager all require some level of advanced data skills, are highly demanded by employers, and command high salaries.

At a recent conference, Morgan Stanley CTO of Infrastructure Tsvi Gal stated “We [may be] in banking, but we live and die on information…. Data analytics is the oxygen of Wall Street.” As more traditional industries compete on the basis of gleaning insights from data, the demand for data literate executives will continue to rise. The dominant companies of the 21st century may not just be those that use data most effectively, but those who successfully retrain their existing workforce to effectively compete in a world where data is eating everything.