In 2004, researchers looked at Swedish marriage data from the ‘80s and ‘90s. And they found some interesting relationships between a wife’s income and the likelihood of divorce: 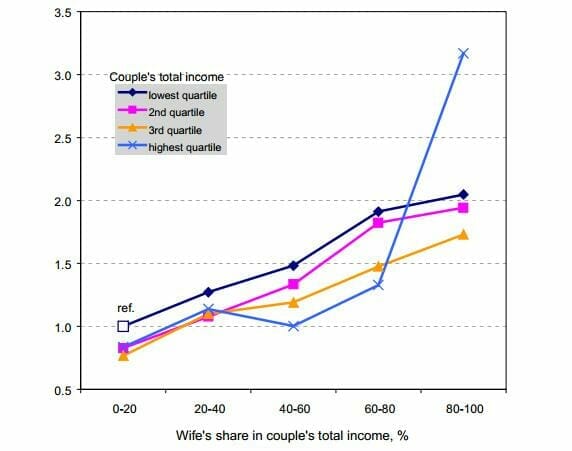 In general, divorce risks increased as wives contributed a higher share to total income. We see this most clearly with the lowest, 2nd, and 3rd income quartiles– the likelihood of divorce is lowest when wives contribute little or nothing income-wise. On the other hand, the likelihood of divorce is at its highest for all income levels when women are the main breadwinners. When a couple is rich, but the wife is really rich, they are most likely to break up by far.

Researchers Guiping Li and Andres Vikat bring up a possible explanation for this trend. While there’s a considerable financial risk for a stay-at-home wife to get a divorce, “a wife who enjoys higher earnings than her husband has a lower economic threshold to leave an unhappy marriage.”

Money buys you options, including the option to get divorced.