The Used TV Price is Too Damn High

At Priceonomics, we’ve learned that our users don’t want to buy used products. Rather, they want to buy inexpensive products, and used items happen to be inexpensive. Let someone else eat the initial depreciation, Priceonomics users will swoop in later and get a good deal. This works well for most products from iPhones to Bicycles – buy used, save money. But if you want to buy a used television, you are in for a world of hurt. As you peruse through the Craigslist listings for used TVs, you may notice something surprising – the prices are kind of high. Do a quick check on Amazon and your suspicions will be confirmed; lots of people try to sell their used television for more than that same TV would cost brand new.

That doesn’t make any sense – no one would ever buy a used TV for $800 when they could buy the new one under warranty for $750. A market like this cannot possibly function properly. What is going on in the market for used TVs?

You’re Selling the TV for How Much?!

At the risk of stating the obvious, a used television should always cost less than its new counterpart. First, someone else has already used it. Second, the condition and quality of a used item is uncertain. Is the seller getting rid of the TV because it is a lemon? Finally, buying a used TV from some stranger’s living room is less convenient than buying with one click on Amazon or at a Best Buy showroom. A used TV is strictly inferior to a new one and should be priced accordingly.

To test our suspicions that something was amiss in the used television market, we compared used TV prices to the prices of buying them new instead. We looked at the discount for “buying used” for televisions versus headphones and phones (categories we’ve previously studied): 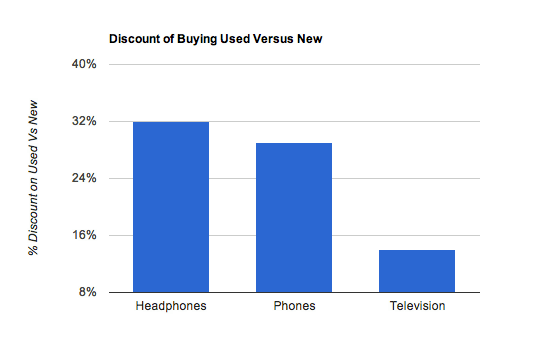 People offer to sell their used televisions on Craigslist at a 14% discount to buying the same TV new. On the other hand, used headphones and phones are sold at a ~30% discount to new. To us a 30% discount for buying used feels relatively fair, but 14% barely seems worth it. Taking a deeper looker at specific used TV models: It turns out, people have very inflated expectations for how much they can sell their used TV. Only 3 of the 26 televisions we analyzed were discounted more than 30% versus a new TV. Insanely, for some TV models, the median used price is higher than the new market price.

Would a 14% discount entice you to buy a used television that might be a dud? Even if the average used TV seller offers this measly discount, plenty of people are out there trying to sell their TVs for a price higher than the new price on Amazon. What gives?

The seller thinks, “I bought it for $1500, I’m being very fair discounting it 33% for the next owner”. Unfortunately, the seller does not realize that during the 9 months they’ve been using the TV, it no longer costs $1500 new. Most likely you can buy that TV new today for $1000 or less.

People appear to be anchored to the price they originally paid for the television, not the current market price. This leaves them blind to the fact that the price of a new TV is always dropping precipitously. CNN illustrates: Alas, even the brave, intelligent and handsome writer of this article is vulnerable to used television pricing blindness. Having bought a TV for $900 last year, $600 seems like it would should be a fair price to list it for resale. In reality, the new price has fallen tremendously according Amazon Price Tracker Camel: Ouch, it’s a bitter pill to swallow that the TV dropped in price so steeply. When people (this author included) try to sell their televisions, they seem to be anchored on the price they originally paid. What they fail to realize is that the price of a new television is falling faster than their internal expectation for how much the item depreciates.

Poorly Labeled – Are We Even Talking About the Same TV?

Another terrible characteristic of the used television market is that practically no one properly identifies the product they are selling. Television manufacturers have developed an arcane product naming system where products are called things like LG-47LK520. The result is that no one actually knows what their television is called so they list it as a “LG 47 Inch LCD TV”. Unfortunately, there are many possible products that meet this description.

We looked through a sample of television listings for sale to see if people properly identified their televisions for sale. We found that only 16% of sellers properly listed their TV with a product code, the rest only included the brand name of the TV. 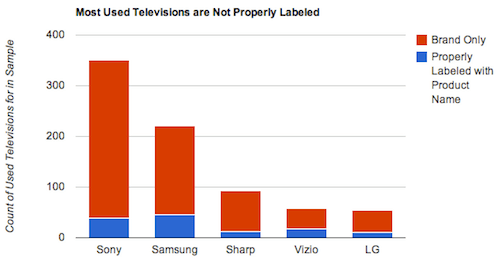 In the market for used televisions, it’s hard to know what is actually for sale. Once you figure that out, you may be disgusted by the price anyway.

Conclusion – How to Fix It

The used television market is broken. Sellers overprice their TVs and aren’t even sure exactly what product they’re selling. It’s likely the size of the used TV market is only a fraction of how large it ought to be.

The market for new TVs works because products are accurately classified and rationally priced. Buying through Amazon is pleasant because it’s like picking and choosing from a product catalog. You know exactly what you are getting and how much to pay for it. Buying a used TV is like shopping at flea market in a foreign country where you can’t speak the language and suspect you’re getting ripped off.

It seems likely that one day a local secondary market will emerge where products for sale are classified with the proper metadata and sold at price where buyers would be happy to “buy it now”. That marketplace would look a lot more like Amazon than Craigslist. In the meantime, we hope that the Priceonomics data can help buyers and sellers agree on prices and add more liquidity to markets like used televisions.