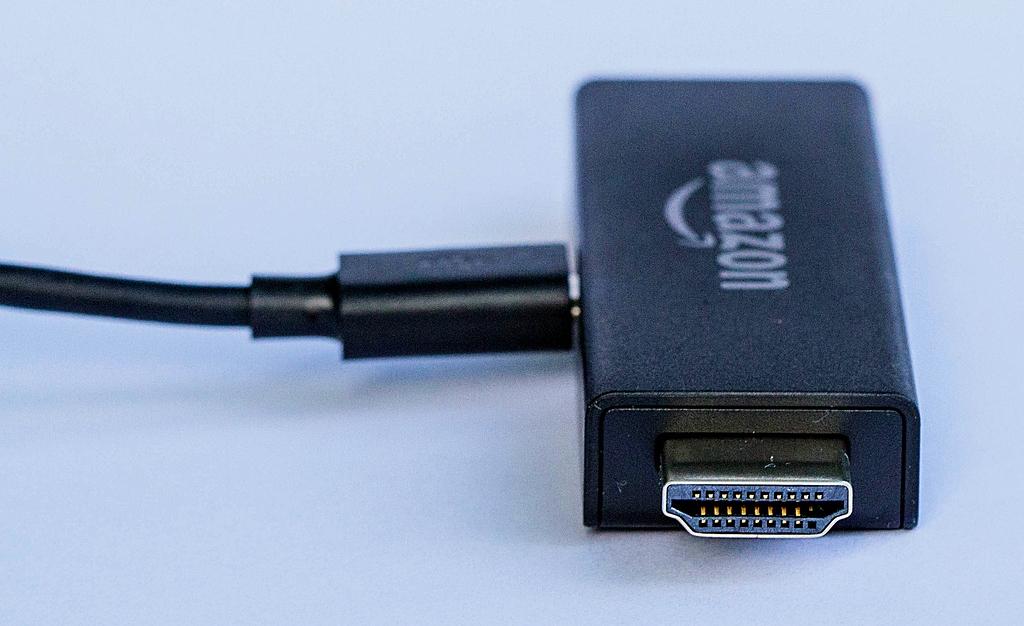 During the most recent holiday season, its newest set of devices, the Echo and Echo Dot smart speakers, were wildly popular – particularly due to the AI assistant Alexa, which can play music, answer questions and connect to devices in your home.

Because of all the media attention around Alexa, we became curious if the Echo devices were Amazon’s most successful consumer electronics product launches. Compared to other devices made by Amazon (Fire tablet, Fire TV Stick, Kindle, etc.), was the Echo dominating?

Unfortunately, we don’t have access to Amazon sales data for each device, so we decided to measure popularity indirectly – how many reviews on Amazon does the product have and how fast (or slow) is the number of reviews growing? Using data from Priceonomics customer Datafiniti's product database, we looked up the number of reviews for Amazon products and filled in the gaps with data from the Internet Archive when necessary.

To our surprise, the Echo is far from being Amazon’s most successful product when it comes to the dramatic growth of reviews. That title belongs to the Fire TV Stick, a small, cheap streaming television device which appears to be exploding in popularity faster than any other Amazon product.

We captured data on customer reviews for a selection of Amazon products released over the years. Below we’ve plotted cumulative number reviews over time, showing which products are in-demand and how quickly their reviews grew. 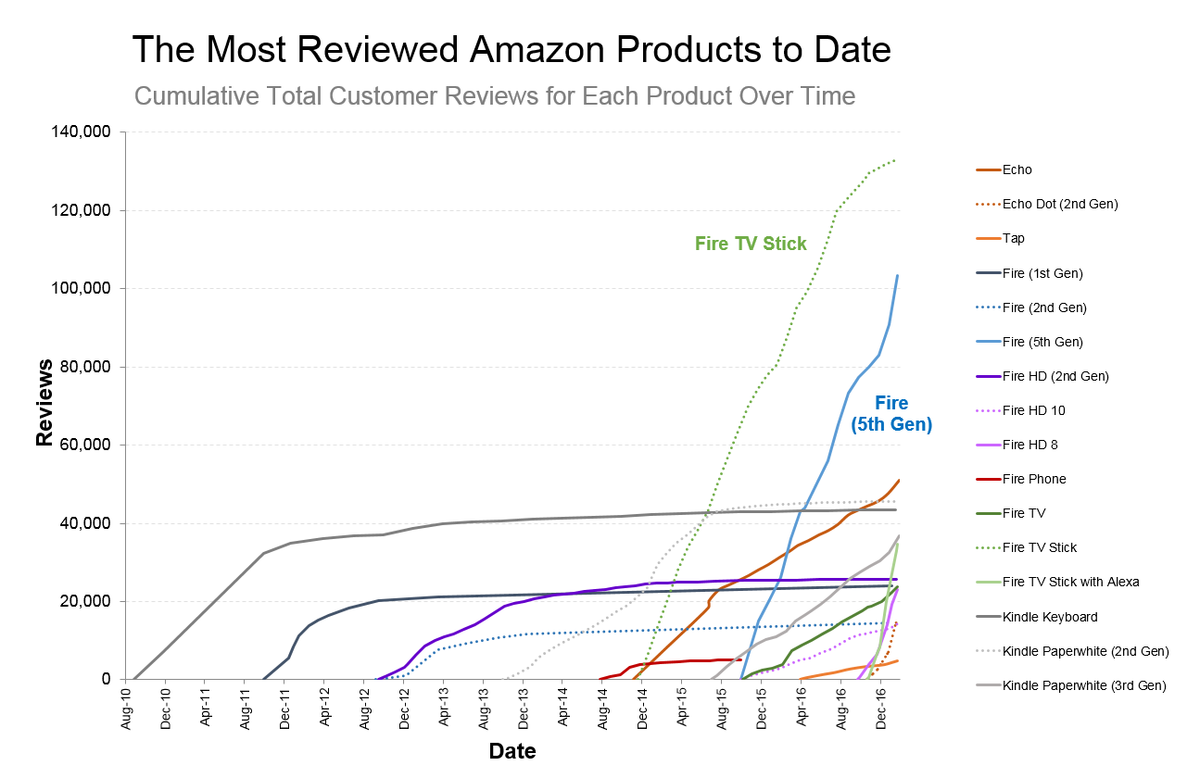 When it comes absolute number of reviews, the Fire TV Stick and the newest Fire tablet significantly separate from the rest of the pack. Other earlier products, such as the Kindle Keyboard and the first generation Fire tablet, experienced relatively significant growth and then stagnated when newer versions were launched.

This directs our attention towards products that were on the market longer, with more time to accumulate reviews. You may notice that a number of products that currently do not have many reviews, but are gaining traction.

To isolate which products are currently growing in popularity the most, we can zoom in on reviews over the past 90 days. Again, some products may have no new reviews as they were released years ago and are no longer sold by Amazon. 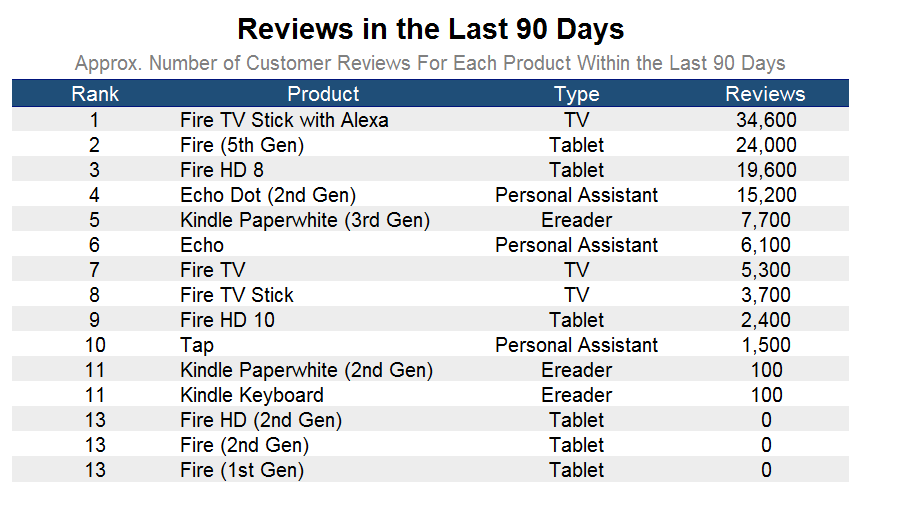 The Fire TV Stick with Alexa ranks first on this list in the highest number of reviews from the past 90 days, indicating it was a top selling item this past holiday season.

As we stated earlier, some of these products have been on the market for many months, while others, such as the Fire TV Stick with Alexa, are brand new. Which products were hot sellers from the get-go?

To compare Amazon products riding the wave of popularity following their release, we analyzed their first 90 days of review data. 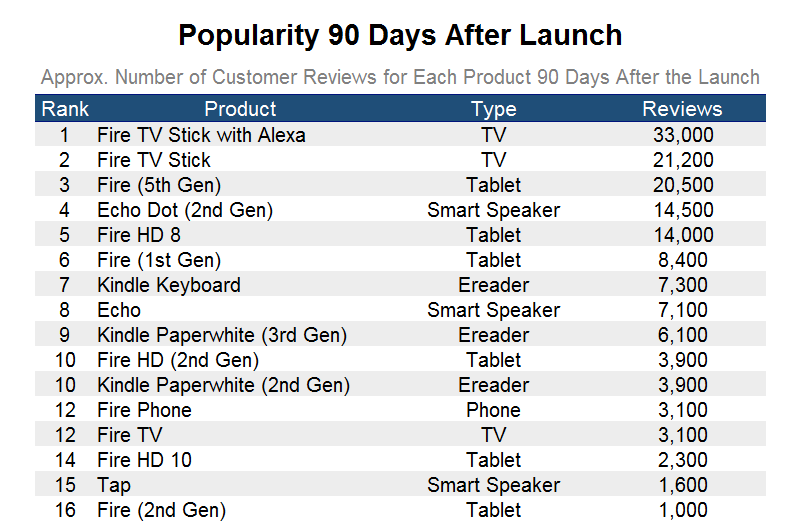 It is important to note a unique selling point of the Echo. It had a limited release on November 6, 2014, with availability by invitation only. During this time customers were able to leave reviews, but the information was not available to the general public. On June 23, 2015, it became available for purchase to all customers. Our analysis is looking at 90 days following this public launch.

A lot of the same products dominate this list, including the Fire TV Stick with Alexa (again) as the most popular product, with even more reviews than the original version. The influx of reviews makes sense as it is the same price, but now offers new features such as voice-controlled technology. We also see the Echo Dot overtake the Fire HD 8, again highlighting the popularity of Alexa. Some of the notably sought-after and older products such as the original Fire tablet and the Kindle Keyboard E-reader sit comfortably in the middle of the group, while less popular products like the previous generation Fire tablet, the Echo Tap, and the Fire TV bring up the rear.

The rank of the Fire Phone of this list demonstrates that number of reviews is not a perfect analog for popularity. Most of the reviews it generated over the year it was available were negative and it’s average rating rarely hovered over three stars. The product experiment was notoriously and ultimately labeled a failure. 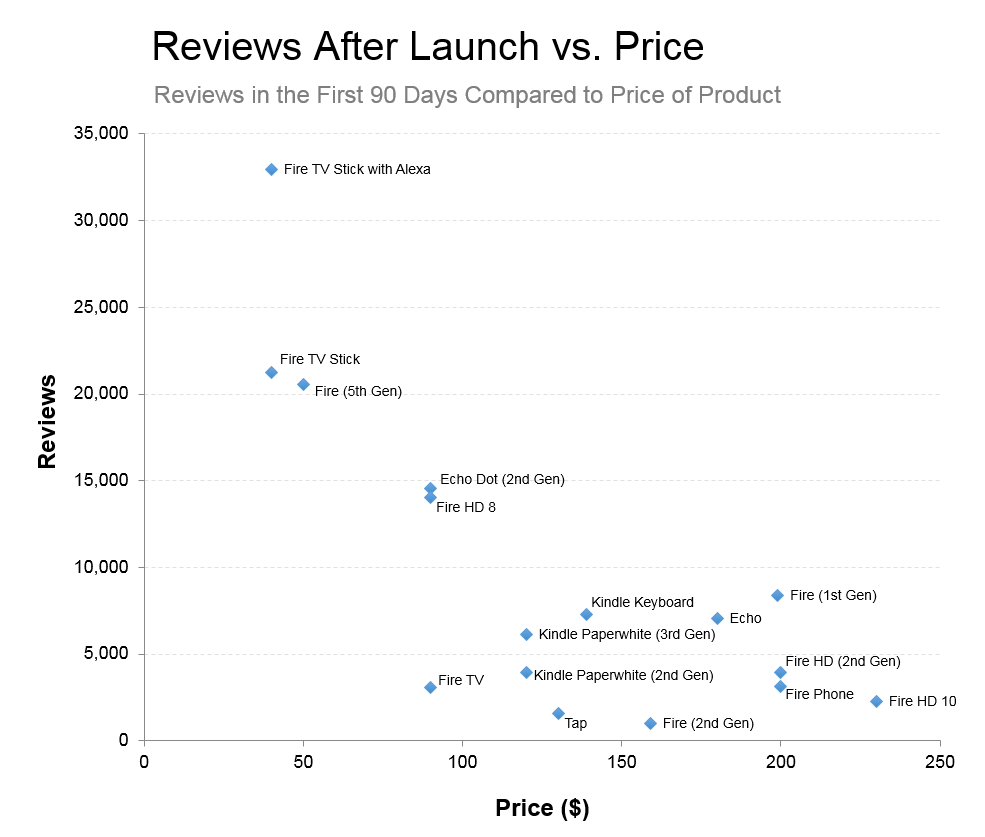 *Prices reflect the listed price at the time of product launch. The price for the Fire Phone was listed as $649 online, but with a contract, most customers only paid $199.99.

Here we can see a strong trend in cheaper devices that get more reviews after their launch. Considering their top level performance and low price point, it’s understandable why the Fire TV Stick and newest Fire tablet are so popular.

This also shines light on the competition amongst similar Amazon products. Two notably unpopular products, the Fire TV and Fire HD 10, face competition from budget friendly alternatives. The Fire TV is over twice as expensive as the Fire TV Stick and offers similar functionality. The Fire HD 10 is an earlier and slightly larger version of the Fire HD 8, but costs almost triple. When faced with a choice, Amazon customers seem to be willing give up some product features in exchange for a break in cost.

These days, it seems consumers will do just about anything to get their hands on the latest and greatest gadget. As Amazon streamlines the waiting process with the click of a button and ease of home delivery, it’s no surprise that they will soon surpass Best Buy as the top seller of consumer electronics.

In our analysis, our assumption is that product reviews matter and are one of many defining factors in whether a new product flourishes or flops. By comparing the number of days since a product launch and reviews in the first 90 days, we can assess if our assumption is true. 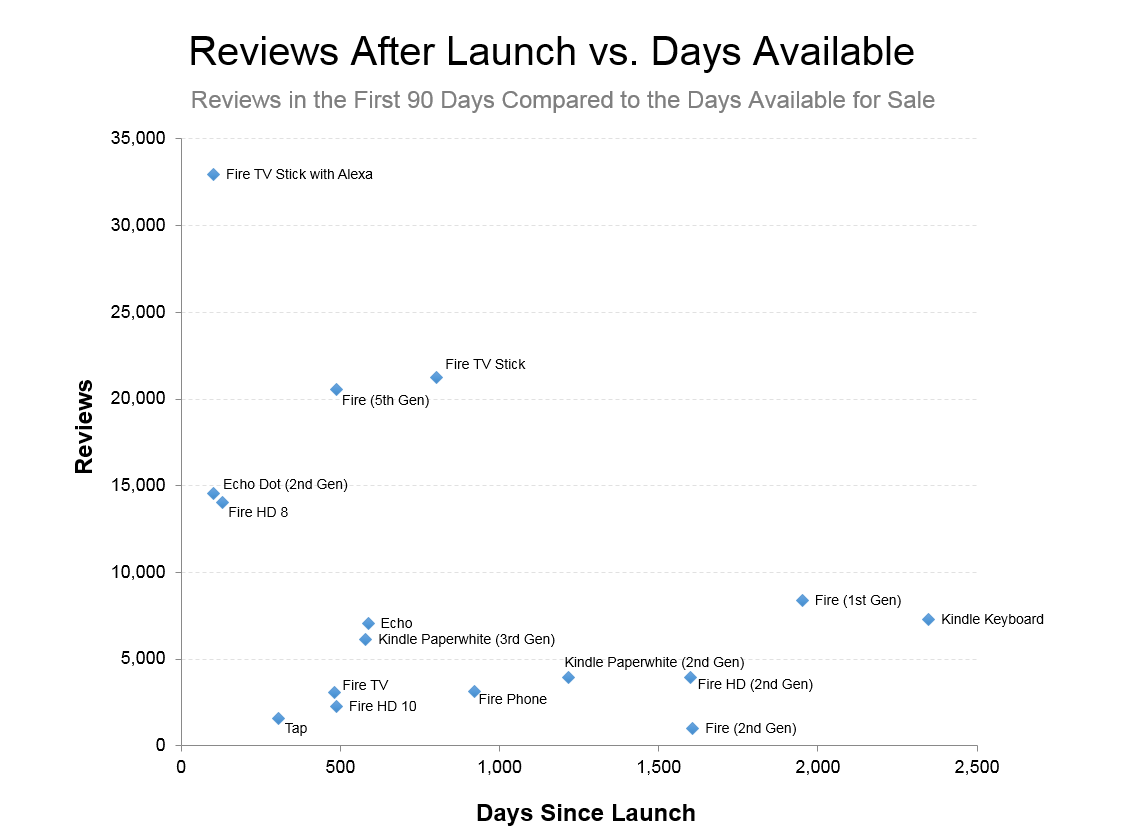 The overarching trend is not as evident in price, but there is some correlation between new products and an increase in reviews. We conclude that as more consumers turn to Amazon to find and purchase products, sales of their branded devices will continue to grow. If their press release from earlier this month is any indication, Amazon seems to be doing just fine. In North America alone, the e-commerce giant reported a 29% growth from 2015 to 2016 in electronics and other general merchandise sales.

Still, not all new Amazon products are an automatic success. Most notably, the Echo Tap’s performance was initially subpar relative to other Echo products. Until recently, Tap took away one of the most appealing features of the smart speaker brand, hands-free voice control. With the Echo or Dot, you can tell Alexa to complete a request, with Tap, you had to physically press a button first. Amazon has since issued an update that now enables a hands-free mode through the Alexa mobile app as long as you are to connected to WiFi.

For all the press that the Amazon Echo receives, our analysis reveals that it is the Fire TV Stick that’s exploding in popularity, as measured by number of reviews. So how does Amazon continue to infiltrate a near-saturated market? It starts with eliminating the competition, in this case, stop selling devices from Apple and Google.

Combine this tactic with a cost-effective price tag, attractive features, and marketplace availability – and you have a winning formula for breakaway success.