The Case for Cheap Weddings 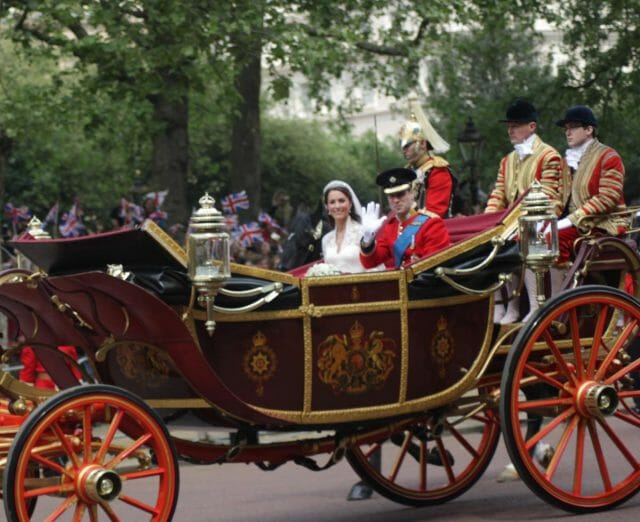 Prince William and Catherine Middleton return to the palace (Wikipedia)

Weddings can be expensive.

The average cost of a wedding in the US is around $30,000. Where does all that money go? A short list of possible expenses:

Hair, nails, make-up, wedding gown, bridesmaid’s dresses, back-up dresses, groom’s tux, groomsmen’s tuxes, back-up tuxes, children’s formal wear, that little pillow-thing for the ring, bouquets, flower petals, table centerpiece floral arrangements, decorations, ‘event space’ reservations, hotel reservations, restaurant reservations, invitations, calligrapher for the invitations, entertainment, the bachelor and bachelorette parties, commemorative t-shirts for the bachelor and bachelorette parties, thousands of disposable cameras, film development for thousands of partially-shot rolls of film, an actual photographer, a sound system, a DJ, booze, advil, sleeping pills, a good shrink, church service fees, rice or glitter or whatever, catering, the cake, the back-up cake, horses for the carriage, driver for the carriage, food for the horses, food for the driver, something old, something borrowed — where the hell do you buy something borrowed?!, something new, a good wedding planner at the last minute because it was a mistake trying to plan your own wedding — you’re biting your nails, your mascara is running, you’re tearing your hair out.

There basically isn’t an upper-limit. The world’s most expensive wedding to date was Prince Charles’ and Lady Diana’s on July 29, 1981. When you adjust the bill for inflation, they spent $110 million in 2014 dollars.

But weddings can also be cheap, at least in theory.

You can apply for a marriage license in the state of California for between $35 and $100. That’s as low as $17.50 a person! Invite your parents and they might chip in, too, or at the very least buy you lunch.

But the question is, are expensive weddings “worth it”? Does a big expensive wedding correlate to a successful marriage? Some researchers at Emory University probed at this question in: ‘A Diamond is Forever’ and Other Fairy Tales: The Relationship between Wedding Expenses and Marriage Duration, and their answer is “probably not.”

Emory’s researchers surveyed thousands of people who had “ever been married to someone of the opposite sex and were not widowed” about (a) their marriages and weddings, and (b) a load of other things to control for:

Then, they constructed a proportional hazards model to analyze the data. A proportional hazards model relates the time that passes before an event occurs (bridge collapse, death, stroke) to variables that might be associated (using a particular material in building the bridge, smoking in your twenties, taking a particular medicine). The model returns a multiplier that each variable adds individually to the probability of that event:

“For example, taking a drug may halve one’s hazard rate for a stroke occurring, or, changing the material from which a manufactured component is constructed may double its hazard rate for failure.”

So what does an expensive wedding do to your hazard rate for divorce? 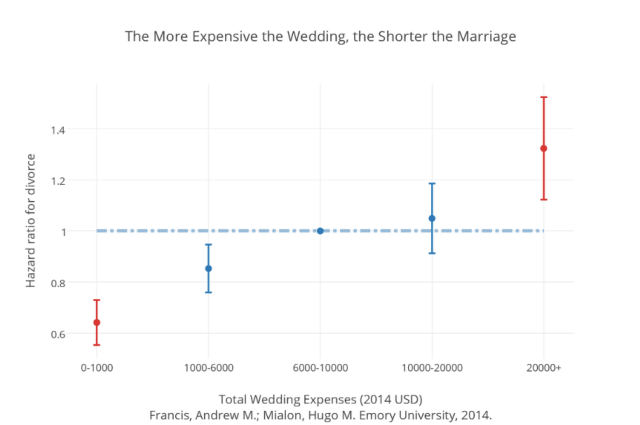 Researchers found a pretty straightforward effect when it came to overall wedding expenses — those who spent the most had the highest probability of divorce and those who spent the least had the lowest. Better cancel the caviar fountains and the party favor jetpacks. And try to get your deposit back from the Goo Goo Dolls!

Researchers also found that higher wedding attendance was correlated to lower hazard ratios for divorce — so maybe it’s best not to have yours on a volcano in Patagonia, or anywhere else where it may be difficult for your Great Aunt Josephine to play pinochle.

Does the price of the engagement ring make for a longer marriage? According to Slate, it might have in the 1930’s, when states started abolishing legal actions that allowed jilted fiancees to sue for “damage” to their reputations:

To be marriageable [in the 1930’s] you needed to be a virgin, but […] a large percentage of women lost their virginity while engaged. So some structure of commitment was necessary to assure betrothed women that men weren’t just trying to get them into bed. The [fact that jilted women could sue for reputation damage] had helped prevent what society feared would be rampant seduce-and-abandon scenarios; in its lieu, the pricey engagement ring would do the same.

Technically this implies that expensive engagement rings made marriage more likely, not divorce — in which a woman is often entitled to alimony — less likely. In any case, this logic is hopefully outmoded in most of the contemporary U.S., and we shouldn’t see too much of a correlation between the robustness of a marital bond and the price of the engagement ring: 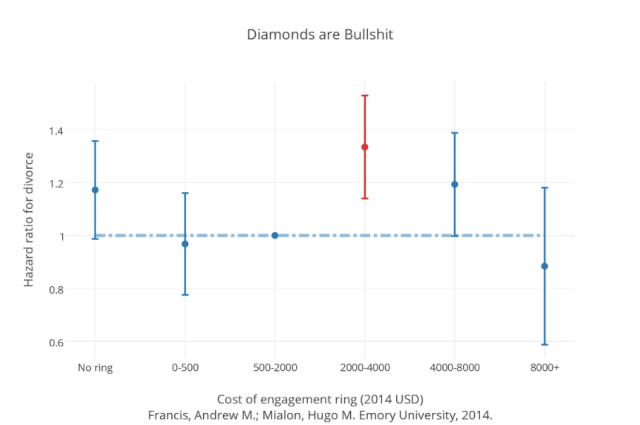 Money Can Buy You Stress! (Stress That You’ll Run Out of Money!)

It’s worth pointing out that this is controlling for a lot of variables — in particular, income. These subjects were recruited through MechanicalTurk, a system in which participants complete (usually very quick) digital jobs for (usually small) monetary rewards. In this study, over 3,000 people participated in the 5-minute survey, for between $0.50 and $0.75.

Higher income is correlated to a lower hazard ratio for divorce — an effect that’s present in this data, but also recorded in previous research — like the study cited in this Time article:

What seems most clear is that less-educated, lower-income couples split up more often than college grads and may be doing so in higher numbers than before. “The people who are most likely to get divorced have the least resources to deal with its impact, particularly on children,” says Amato.

If you don’t control for income, it reverses the relationship between wedding expenses and hazard ratio, because wedding expenses are primarily an indicator of income. Which means that to answer the age-old scientific question, “What the hell is going on here?!” we actually have a good candidate.

The researchers had a hunch that if they found a relationship between wedding spending and marital stability, it could have to do with post-wedding debt-stress. So they asked a survey question about that, too! They found that women in particular were likely to stress out after an expensive wedding:

Existing research has suggested a link between economic stress and divorce, so if a more expensive wedding causes either spouse to worry about money, this would explain those earlier graphs.

So mind your budget! Or your wedding could just ruin your marriage.