The Cold War Of Online Dating

The 2008 and 2012 Olympics made irresistible metaphors for the contrast between America and China: one individualistic and capitalist, the other collectivist and (kinda) communist.

American athletes each have their own stories of personal sacrifice in pursuit of a dream. Chinese athletes are often selected by the state at a young age, raised and trained at centers that can uncharitably be called “factories,” and compete to raise China’s stature. 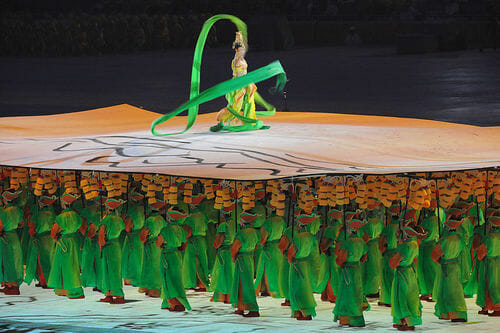 China hosting the opening ceremonies in 2008.

The New York Times profiled China’s matchmaking scene this weekend, and it’s hard not to see the same metaphor at work.

In both China and the US, matchmaking is big business. In the United States, the market for online dating sites like OKCupid and Match.com is $2.1 billion and growing quickly. Similar sites in China make up a rapidly growing market in the $300 million range, but this does not include the thousands of Chinese mothers working full time to find their sons and daughters a spouse, or the companies charging $10,000 to over $1 million to help China’s wealthiest men meet their fantasy wife.

While more and more Chinese and Americans can agree that finding a spouse shouldn’t be left to chance, they would not do a good job writing each others’ profiles.

In the world of online dating, every American needs to be worthy of a New Yorker profile. Here are some tips from the (many, many) sites offering advice on how to write an online dating profile. 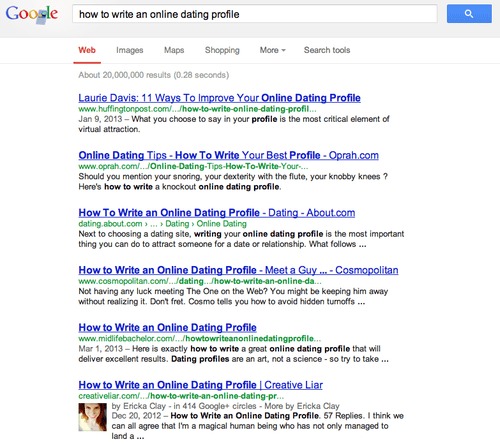 “Expanding on at least one or two topics in your profile through storytelling will allow your match to get a better sense of your world. Mention the time you went cliff diving in Hawaii, did stand-up comedy in front of a live audience for the first time, or backpacked through Europe after college. Including stories in your profile will make relating to you easier.”

“Before you start writing, put on lipsick. Or a cowboy hat. Or your coolest T-shirt and stilettos. Play your favorite CD. Props that make you feel soulful, frisky, and fascinating help you make those claims for yourself in your ad.”

Americans even complicate the picture section of profiles with our overwhelming desire to be special and unique snowflakes. From Cosmo magazine:

“And make sure to include a few photos of you in your natural environment — hanging out at a BBQ or cuddling with your dog. Your pictures should tell a story — just like what you write – and show off your personality. A slideshow of headshots on a white background won’t do that.”

Compare that to this “profile,” a sign being held up by a Chinese mother looking for a wife for her son: A “marriage market” in China

Highlighting basic characteristics of age and social and economic status is the norm in China, online or off:

“According to Shang-Hsiu Koo, CFO of Jiayuan, China’s largest online matchmaking website, what users value most in a potential match are education level, age, height and residency (in China, having a residency permit, hukou, in a top-tier city is highly desirable because only those with permits have access to public services and certain employment opportunities in that city). In addition, for men today to be taken seriously, they must own a car and hold a deed to an apartment. (A generation ago, a washing machine and refrigerator would have sufficed.) All these personal facts can also be found on the profiles hanging in the People’s Park marriage market.”

It’s hard to look at these differences without some hand waving and sweeping generalizations. In contrast to Americans’ stated desire to find that one unique individual, China’s approach to matchmaking certainly seems much more about social harmony and starting stable families. As the Times reported:

“China’s matchmaking tradition stretches back more than 2,000 years, to the first imperial marriage broker in the late Zhou dynasty. The goal of matchmakers ever since has usually been to pair families of equal stature for the greater social good…

…the search for a suitable match — what the Chinese call mendang hudui, meaning roughly ‘family doors of equal size.’”

It’s easy to see how we could be offering a pure cliché here. Maybe America’s status as a rich country has given people the privilege of looking for mates based on their individual personalities, whereas China’s intense competition to be part of the rising economic tide, abetted by the Chinese one child policy and preference for boys that resulted in a gender imbalance of 24 million extra men, means that concerns closer to the wallet take precedence.

But that’s why Chinese dating sites will be so interesting to follow. If Chinese twentysomethings start posting pictures of themselves playing ukuleles in grimy coffee houses, then maybe we can finally dismiss all this talk of Western individualism versus Asian collectivism.