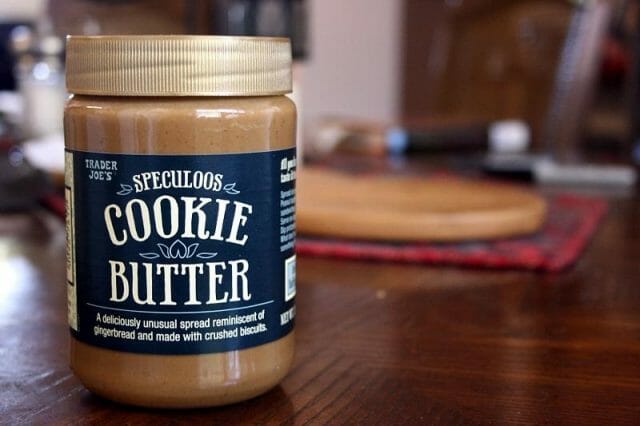 It looks like peanut butter but it tastes like the distilled essence of cookies in creamy, spreadable form. In the United States you can buy it at Trader Joe’s, where all weirdly delicious quirky snack things in America reside. The Trader Joe’s product description suggests eating it several ways: on pancakes, on a spoon, with celery. OK. But what is it? And why is it?

Unpacking these questions reveals the history of modern cookie butter: short, glamorous, legally fraught, and the result of a reality television show. 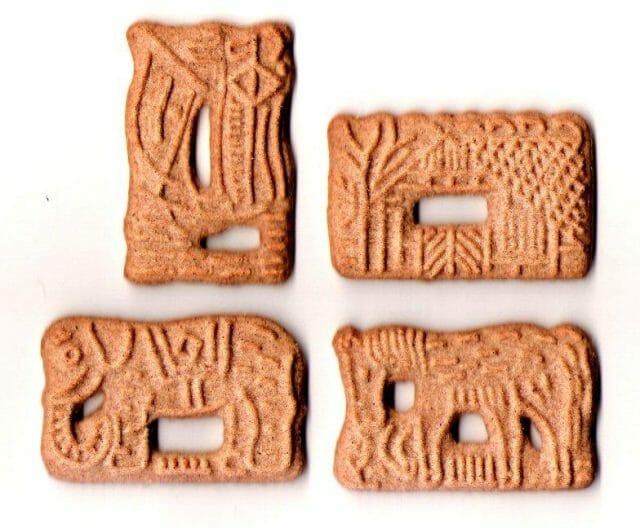 Speculoos are cookies. They’re not just any cookie though. They’re spiced, shortbread-like sugar cookies, popular in Belgium and the Netherlands around the winter holidays. One brand of speculoos, marketed to English speakers, is Biscoff — made popular in the Anglophone by its use as a Delta Air Lines in-flight snack.

It might sound crazy, but one thing people would sometimes do for a cheap lunch snack would be to pack speculoos crumbs between two slices of buttered bread. Kind of like the Cap’n Crunch sandwich Ally Sheedy’s character eats in The Breakfast Club. But if you make one of these sandwiches in the morning, by lunch time the cookies melt into the butter, and you’re left with less of a crunch, more of a fatty, grainy, cookie-flavored paste.

Another thing some people would do with speculoos cookies is dip them in coffee. After softening them in coffee, 40-year-old Belgian housewife Els Scheppers and her friends liked to spread the cookie mush on toast. In 2008, convinced that a jarred, pre-mushed version of this cookie would make millions, Scheppers sent her idea to a reality television show: De Bedenkers, which means “The Inventors” in Dutch. As Scheppers has recounted:

“I did not wait for a second, I just sent in this idea of ‘Please put on the market a spreadable form of the Biscoff cookies. That’s what we all are waiting for.’ I didn’t really realize that I had to develop the product myself, and that it was really a television contest. I was invited to present my product for a panel of specialists, and they ‘bought’ it. They all realized that this was really could be a big thing in a market.”

Despite the fact that she didn’t really know what she was getting herself into, Scheppers did well on the program. Though she did not win, Lotus, the company that makes Biscoff cookies, approached her at the end of her run to work with her in developing her cookie spread. By 2009, Lotus released Lotus speculoospasta — the first corporate cookie butter in the world.

Speculoospasta was a smash hit — making an estimated 10 million euros in revenue in 2009. And everybody wanted a piece of the action.

Unfortunately for Lotus, Scheppers actually wasn’t the only participant on De Bedenkers to come up with cookie butter. Another team of contestants on De Bedenkers, Danny De Maeyer and Dirk De Smet, had also presented a cookie spread as their idea. For whatever reason, they didn’t advance as far as Scheppers did in De Bedenkers. But they had obtained an official patent on the recipe back in 2006. They used this patent against Lotus, which claimed the patent was invalid. The dispute ended in 2009, when De Maeyer and De Smet sold their patent to Lotus. Lotus almost immediately turned around and started using the patent against the many other cookie companies that had started marketing cookie butters of their own. One of these bakeries, Biscuiterie Willems, led a coalition of manufacturers in petitioning to nullify Lotus’ patent on cookie butter. Crucial to their case was the woman behind the blog, Oma Wapsie, “Grandma Wapsie.”

The Dutch author of the blog, Oma Wapsie, soon became known to the public only by her first name: Rita. Oma Wapsie was Rita’s personal recipe blog, and when she launched the blog in 2002, one of the first things she posted on it was her mother’s recipe for koekjestaart, which means, “cookie cake.”

According to Rita’s blog post, her mother would make the cake at Christmas time, in the Netherlands immediately after World War II, when resources were tight. She made the frosting for the cake by using the heel of a bottle to crush cookies into a paste with some butter. “It was simple,” Rita said of the holiday confection. “We got koekjestaart and a glass of chocolate milk.” When Rita became a mother, and then a grandmother herself, she continued to make koekjestaart for her family on the holidays.

Then emails abruptly dropped off, presumably because Lotus had acquired the patent and was no longer interested in nullifying it. They sent her a gift basket of cookies and speculoospasta for her trouble.

When Lotus tried to use the same patent sue its competitors, they eventually found their way to Oma Wapsie’s door. Lotus’ patent was ultimately nullified, partially on the basis of the Oma Wapsie blogpost, in 2011. By the time Lotus brought the English-branded “Biscoff spread” to U.S. markets in 2012, Trader Joe’s cookie butter was already on shelves (and was soon flying off of them at an alarming rate). 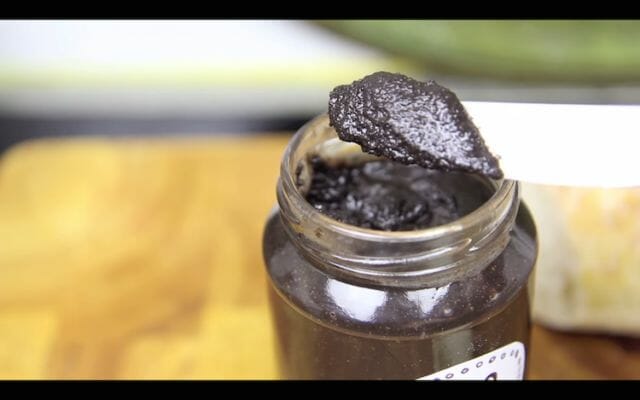 In the intervening years, a culture has sprung up around “homemade” cookie butter. You can food-process store-bought cookies with vegetable oil. You can substitute Oreos for speculoos. You can make the cookies from scratch. But the market for pre-pasted cookies remains strong: cookie butter was the most popular product at Trader Joe’s in 2014 — which has also released several variations on the product (including “crunchy” cookie butter, and “cookies and creme”).

It turns out that when you crush up a bunch of cookie crumbs with some sugar and butter or vegetable oil, and add a few magic ingredients to make it shelf stable, you get one of the most popular food products of the decade. And, as it turns out, this concoction has not only made retailers a lot of money, but some lawyers as well. Though not Rita/Oma Wapsie, who has said a “few thousand Euros” would be a “nice gesture.”