The Cost of the Death Penalty 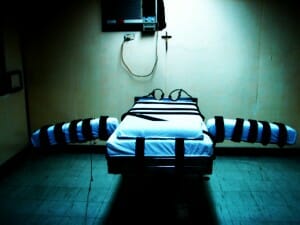 A death penalty trial costs the state that pursues it millions of dollars more than a non-capital trial. In other words, it costs more to execute a criminal in the United States than to lock him up in prison for life.

The roots of this surprising fact include that death row inmates must be held in expensive maximum security prisons (which require that inmates be in solitary cells and supervised 24/7) and that the methods of execution, such as lethal injection, have been challenged in court as inhumane. But the main reason is that court cases seeking the death penalty cost more than an ordinary trial: they take more time, require the jury be more carefully vetted, necessitate more expert witnesses, and invite more appeals.

Investigating the mystery of why executing a man would cost more than imprisoning him for life, we expressed some alarm that capital cases receive so much more attention. Spending extra time to be certain about the guilt of someone sentenced to death is a worthy goal. But life imprisonment without parole is also a serious sentence. Should cases seeking only life imprisonment really receive less attention than a capital case?

For answers, we turned to Richard Dieter, Executive Director of the Death Penalty Information Center. He explained that the difference in cost is a result of a difference in process rather than quality. “In a typical criminal case, 95% are settled by plea bargain and the sentence is prescribed by law.” In contrast, Dieter told us, cases seeking capital punishment “almost always go to jury. They have two trials – one for guilt and one for punishment – and each can be appealed.”

The difference in process is a result of the Supreme Court repeatedly ruling that “death is different.” As such, courts need to go beyond normal due process to determine that execution is an appropriate punishment. A 1972 Supreme Court case had found that the inconsistent and arbitrary application of the death penalty across the country was unconstitutional and constituted cruel and unusual punishment, therefore necessitating a second trial to determine whether the death penalty is appropriate, as well as additional pre-trial motions, the hiring of more experts, and more time spent scrutinizing the biases of the jurors – all of which increase the duration and cost of the court case. Not to mention the lengthy appeals process which drags on until many prisoners have died of natural causes on death row.

While we were reassured that the resources spent on capital cases did not mean that other criminal cases received less attention, Mr. Dieter and the Death Penalty Information Center do stress that the death penalty system is using billions of dollars that could be put toward other purposes. A report from California demonstrates the huge costs involved:

“The report found that the state was spending $137 million per year on the death penalty. The Commission estimated a comparable system that sentenced the same inmates to a maximum punishment of life without parole would cost only $11.5 million per year. Since the number of executions in California has averaged less than one every two years since the death penalty was reinstated in 1977, the cost for each execution is over $250 million. The state has also indicated it needs another $400 million to construct a new death row.”

California spends an extra $100 million a year on its capital punishment system. But the problem is not unique to California. A report from the Urban Institute found that Maryland spent $186 million on execution cases from 1978 to 1999. A study in Nevada found that the 80 capital cases taking place in just one county would cost $15 million more than they would as normal criminal cases. For counties that decide to seek the death penalty in a case, the financial impact is often comparable to an environmental disaster, forcing the local government to raise taxes or cut public services.

Decisions on the legality and process of execution cases has been and will continue to be based on arguments about justice, not economic grounds. All the same, the financial costs of the death penalty are enormous.