The Creative Genius of Slime Mold

Physarum polycephalum isn’t much to look at. Most commonly found feasting on decaying vegetation in the woods, the distinctively yellow slime could easily be mistaken as the aftermath of a mustard eating competition gone awry.

Even less impressive is the organism’s structural complexity: it is single-celled, contains only trace amounts of DNA, proteins, and enzymes, and spreads at the poky rate of 1 millimeter per hour.

But in spite of all reason, this plasmodial slime mold is also, by some metrics, remarkably intelligent. Capable of navigating through mazes, recreating complex, man-made networks, and even anticipating recurring trends, the organism has commanded the attention of researchers all over the world. Below, we’ve explored three studies that have exposed the extraordinary capabilities of Physarum polycephalum.

In 2001, a team of researchers at Japan’s Hokkaido University set out to track the ability of Physarum polycephalum to navigate through a labyrinth.

A single polycephalum was chopped up, then disseminated evenly in a small maze. Within a few hours, the mold had grown outward, connected all of its disparate pieces, and filled every possible path in the maze. When the researchers placed small nuggets of Quaker Oats at the entry and exit of the maze, something rather amazing happened:

Slime mold navigating a maze to find food; via PBS

Slowly but surely, the mold retracted from every dead-end in the maze, and concentrated its efforts solely on the most efficient route to the food. “A single thick vein forms,” wrote the researchers, “which connects the two [food] points with a length very close to the shortest path.”

This experiment was recreated dozens of times and in every instance, yielded the same result: in its quest to survive, the mold “changed its morphology in the maze by developing one thick tube” that led it directly to the food source. 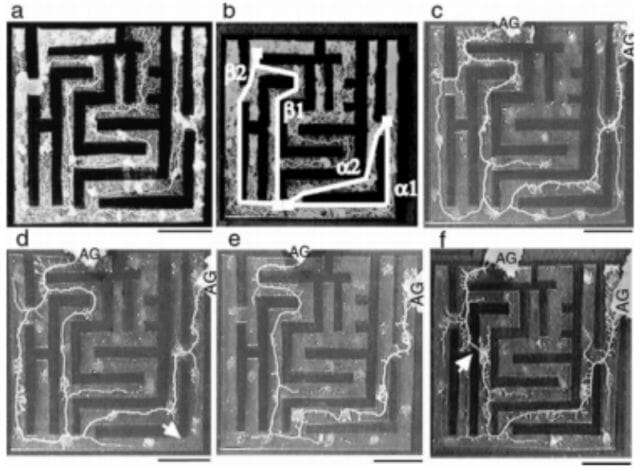 Physarum polycephalum navigated its way through a maze with efficiency and consistency; source: Path finding by tube morphogenesis in an amoeboid organism (Nakagaki, 2001)

From this study, the researchers concluded that the slime mold had some primitive form of intelligence. “This effective process of tracking the minimal-length solution in the maze,” they wrote, “may be considered as a cellular computation of the plasmodium by intracellular materials.”

The Ability to Learn and Change Habits

Researchers at Hokkaido University couldn’t get enough of Physarum polycephalum. Seven years later, they conducted another study, in effort to determine if the mold could anticipate and recall events despite its lack of a brain.

For this experiment, the mold was placed on a plastic sheet and allowed to grow outward in ideal (warmer, wetter) conditions; every 10 minutes, the position of its tip was measured. Then, at regular intervals, the mold was exposed to bursts of “cooler” and drier air. During these bursts, the mold significantly slowed in its rate of expansion.

Then, something unexpected occurred: after several intervals, the slime mold began to anticipate when it was going to be exposed to the cold air, and preemptively slowed down before it hit, so as to conserve its energy. 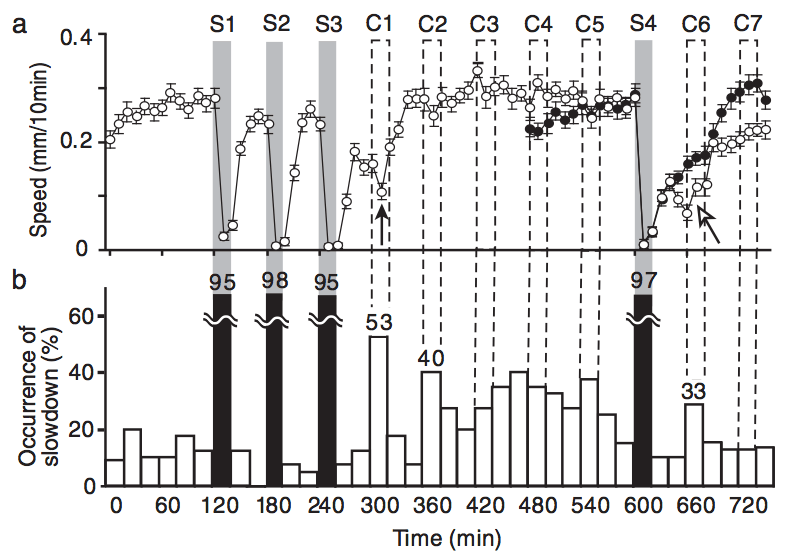 Predicting intervals (or a “periodicity”) is not an easy task — even for humans. “When the ancient Egyptians recognized the regular periodicity of the flooding of the river Nile and succeeded in anticipating the next flood, this breakthrough triggered the invention of the calendar and was a symbol of the dawn of civilization,” note the researchers. “It is thus remarkable that a single-celled organism can perform such a function.”

From their study, the team concluded that the mold had some primitive capacity for learning, despite its lack of a brain.

In 2010, the Hokkaido University team once again dove into the wild world of Physarum polycephalum — this time, with the goal of displaying its aptitude for forming efficient networks.

Researchers recreated a miniature version of the Tokyo railway network, using a Quaker Oat to represent each city, then placed the slime mold on the oat representing Tokyo. Obviously, the construction of the actual railway had been impeded by geographical constraints (mountains, lakes, etc.); this difficulty was simulated by exposing the mold to a varying intensity of illumination, as the plasmodium avoids bright light.

“The Physarum plasmodium grew out from Tokyo and initially filled much of the available land space,” observed the researchers, “but then concentrated on [food sources] by thinning out the network to leave a subset of larger, interconnecting tubes.” 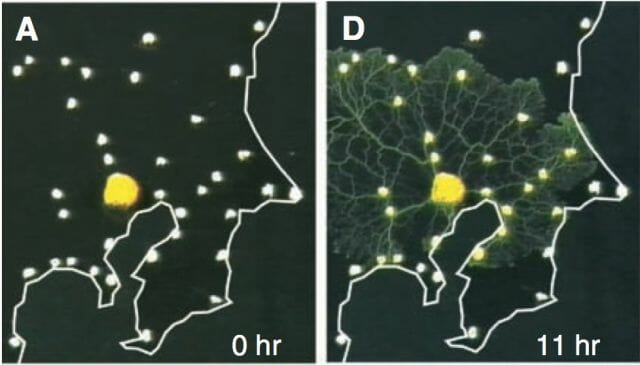 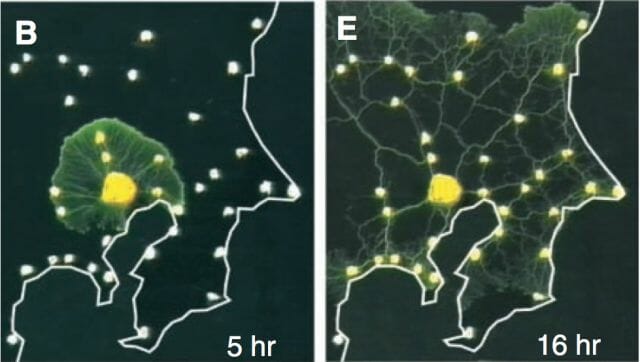 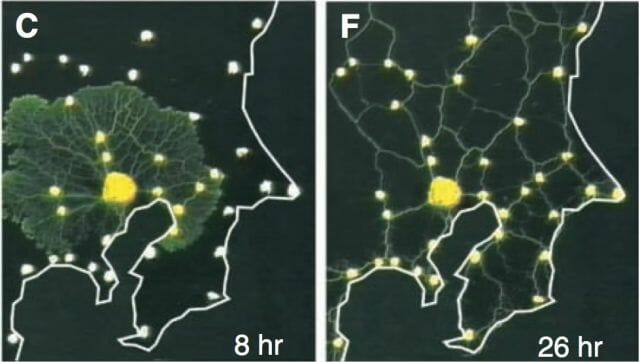 The large yellow dot here represents Tokyo, and is where the Physarum was initially placed; from there, it spread to the little white dots (representing major surrounding cities), and reduced itself to only essential links between them. This process took the organism only 26 hours. Source: Rules for Biologically Inspired Adaptive Network Design (Nakagaki; 2010)

After numerous trials, the researchers concluded that the mold “showed characteristics similar to those of the rail network in terms of cost, transport efficiency, and fault tolerance” — and it did so by creating a “process of selective reinforcement of preferred routes and simultaneous removal of redundant connections.”

Using their findings, the team then developed a biologically-inspired mathematical model for adaptive network construction. In theory, they surmise that this formula can be used as a starting point to “produce [transportation] solutions with properties comparable to or better than those of real-world infrastructure networks.”

“The initial shape of a plasmodium is represented by a randomly meshed lattice with a relatively fine spacing. The edges represent plasmodial tubes in which protoplasm flows, and nodes are junctions between tubes. Suppose that the pressures at nodes i and j are pi and pj, respectively, and that the two nodes are connected by a cylinder of length Lij and radius rij. “h” is the viscosity of the fluid, and Dij = pr4/8h is a measure of the conductivity of the tube. As the length Lij is a constant, the behavior of the network is described by the conductivities, Dij, of the edges.” Source: Rules for Biologically Inspired Adaptive Network Design (Nakagaki; 2010.

“What had taken humans well over 100 years — a complex system developed over time by community dwellers, civil engineers, [and] urban planners — took the slime mold just over a day,” biological artist Heather Barnett said in a TED talk on the organisms. “[Slime mold] is a biological computer.” 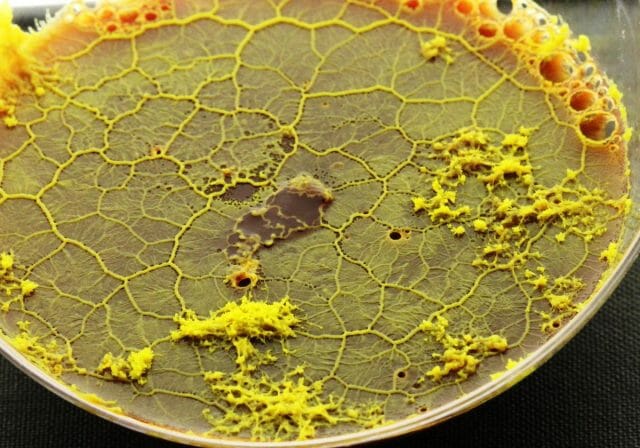 The awe of Physarum polycephalum can’t be confined to these studies. Its movement has been used to compose music, model biological computing devices, and study cooperative actions.

Intrigued by these abilities, Heather Barnett started The Slime Mould Collective, a portal for research and creative practices relating to these “simple yet intelligent organisms.” Here, scientists, artists, and programmers gather to discuss the mysteries of mold.

But how is it that a single-celled organism can be so confoundingly intelligent without a central nervous system or a brain? The effort to fully understand P. polycephalum is ongoing, but scientists suspect it has something to do with the way it moves.

“Inside [these] organisms, there is a pulsing rhythm” says Barnett. “It [could be that] this synchronous, continuous movement allows it to understand its environment.”