The David Spade Index: Which Actors Are Hated by Critics but Loved by Fans? 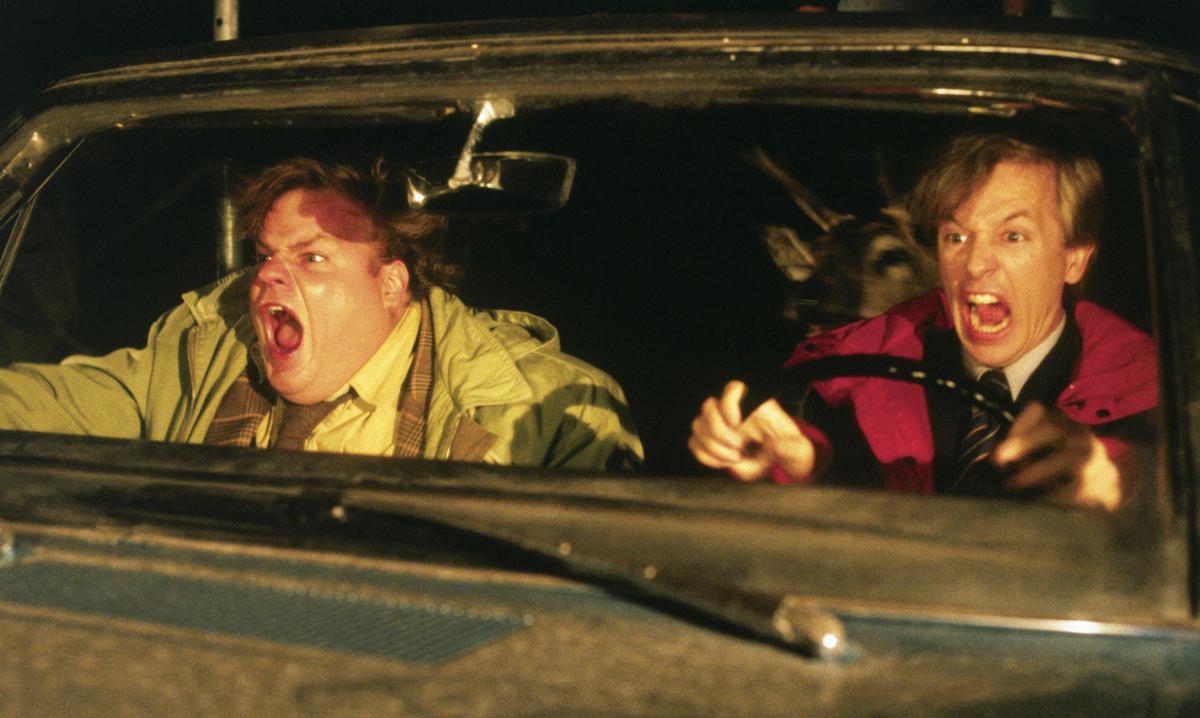 For decades, moviegoers have turned to critics like Roger Ebert for a thumbs up or thumbs down review of a new release. We trusted the experts to tell us which movie was worth spending $12 and 2 hours of our lives, and while average janes and joes could debate, say, Bruce Willis’s performance in Die Hard over beers, Roger Ebert and his peers had the final word on actors’ performances.

Now, however, movie criticism has expanded from a print-centric field governed by a handful of specialists to the digital realm, open to anyone with an opinion. Websites like IMDb, Rotten Tomatoes and Metacritic aggregate both critic and audience reviews, and the opinions of audiences don’t always agree with the critics’ critiques.

We analyzed the scores of thousands of movies to identify which actors and actresses are beloved by the audience—even though critics say their movies suck. If you love, hate, or love to hate Adam Sandler, Gerard Butler, Clint Eastwood, or a certain Chris Farley sidekick, you might want to read on.

How often do critics and audiences disagree? That’s what is shown in the above chart.

In general, they agree on good movies: there's a lot less variability at the top right of the plot. (If audiences and critics agree about a movie, the point will fall close to the dashed line.) Though variability is a lot higher near the bottom left hand corner of the plot, it tends to fall above the dashed line—indicating that audiences often appreciate bad movies more than critics do.

A quick linear model shows that while critic scores were significant in predicting audience scores, they only accounted for 54% of the variation, which means audiences and critics disagree a lot. (You can check out Ben Moore's blog post for a deeper dive into which movies are overrated and underrated from an audience perspective.)

Besides the obvious merits of certain genres (action movies with terrific explosions or dramas with well-written, nuanced dialogue), what might make a moviegoer enjoy a movie more or less than a critic? It could be an immeasurable “fun” factor that stems from a certain premise or actor. Maybe fan affinity for an actor or actress can draw focus away from a flawed plot or poor storytelling?

Let’s look at the movie Law Abiding Citizen (2009) as an example. Jamie Foxx and Gerard Butler star in this thriller about the revenge of a widower (Butler) on the district attorney (Foxx) who saw his wife and daughter’s murderer set free by a legal loophole.

Critics called it “a preposterous exercise in high-minded brutality” and a “ridiculous execution of a misguided concept.” But users rated it “fun and exciting” and a “smart, innovative thriller that’s wholly implausible but nevertheless a whole lot of fun” with “Gerard Butler amazing as usual.” The difference in scores here is 50 percent: 25% from the critics, but 75% from users.

It seems that audiences really like Gerard Butler and the over-the-top fun movies he appears in, but movie critics do not. This is why, when we analyzed audience and critic scores of the movies that 117 popular actors star in, we found that Gerard Butler is a quintessential fan favorite who can’t seem to please the critics. 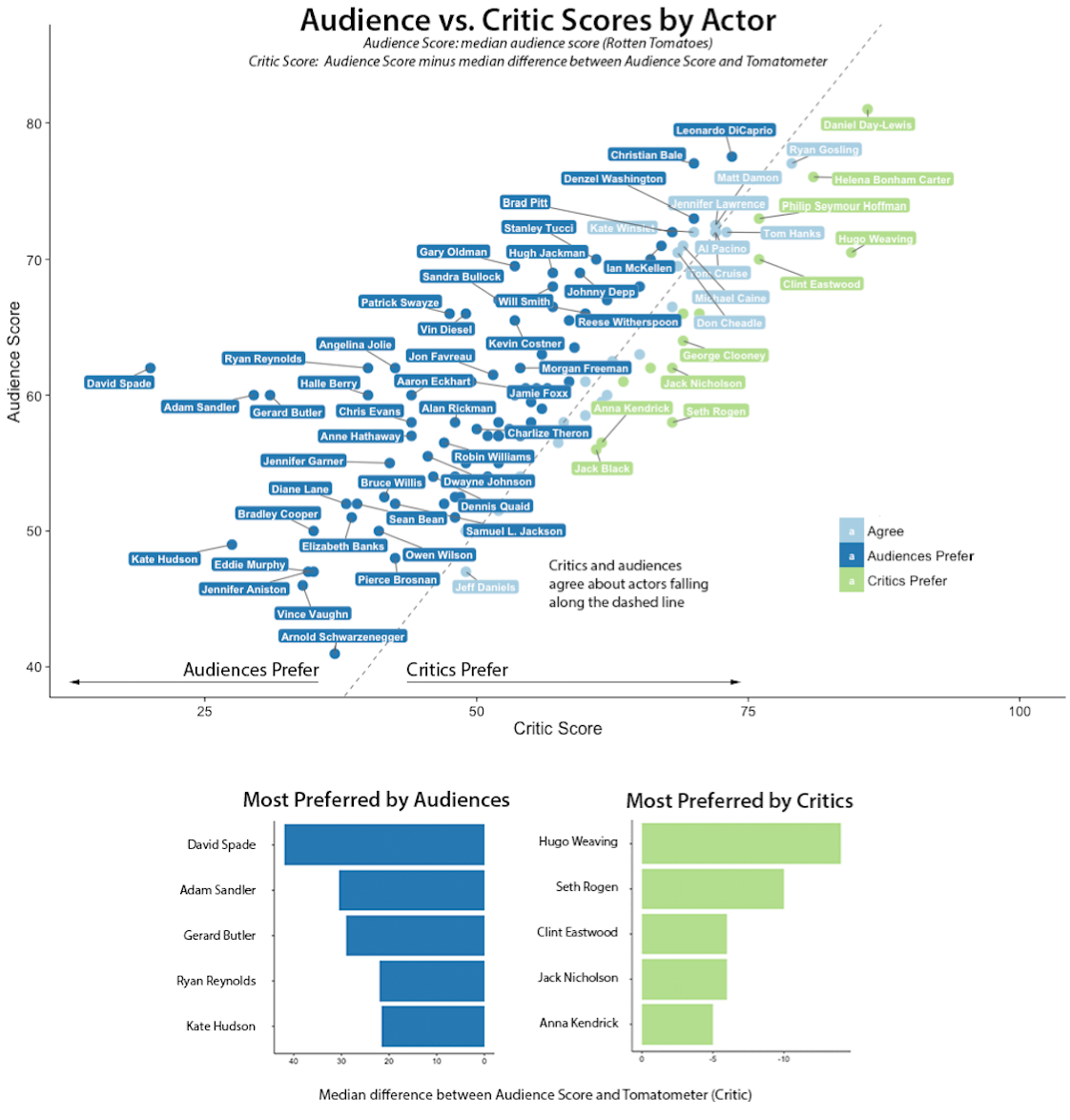 That said, he's not the quintessential fan favorite who can’t please critics.

For this analysis, we relied on the Open Movie Database (OMDb) to access audience and critic scores from Rotten Tomatoes for thousands of movies. Both are scores out of 100, but they are calculated a little differently. The critic score (“Tomatometer”) is the percentage of “fresh” critic reviews, while the audience score is the percentage of user reviews that are at or above 3.5 out of 5. In our analysis, we considered movies that had at least 1000 user reviews and credited the actor in question as one of the top four actors. To evaluate an actor’s career, in terms of how differently critics and audiences view his or her prowess, we looked at the median difference between their movies’ audience and critic scores.

You can see the results in the above chart, and you can see the full list of actors we analyzed here. We'll look at some of the most extreme cases below. 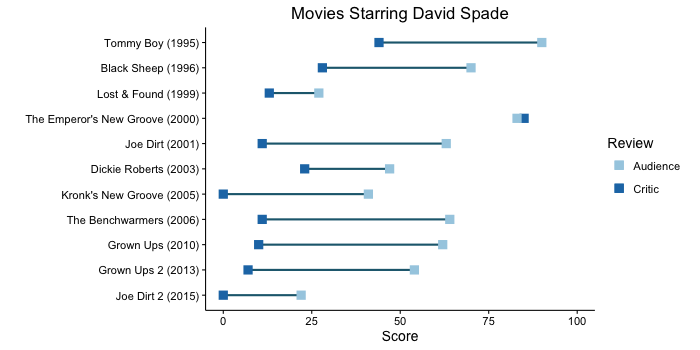 David Spade is by far the most polarizing actor in our analysis. Aside from a Disney flick loved by both audiences and critics (The Emperor's New Groove), most of his films were panned by critics. But audiences often liked them. Moviegoers gave Joe Dirt a 63% rating, but in his review of the film, Peter Travers of Rolling Stone said, "In one scene, raw sewage is dumped on Joe. See Joe Dirt and you'll know how that feels." 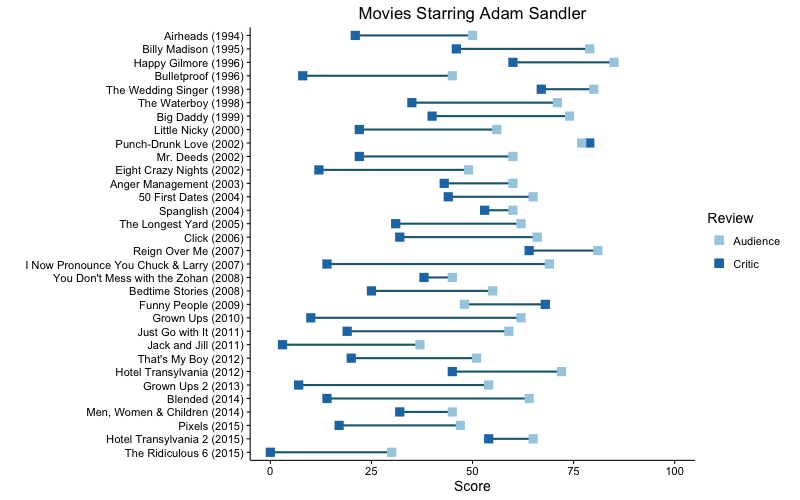 Although there are exceptions like Punch Drunk Love, Adam Sandler tended to entertain audiences and bore critics. The biggest gap is among the amateur and professional reviews of I Now Pronounce You Chuck & Larry, which inspired Manohla Dargis of the New York Times to write, "Sporadically funny, casually sexist, blithely racist and about as visually sophisticated as a parking-garage surveillance video." 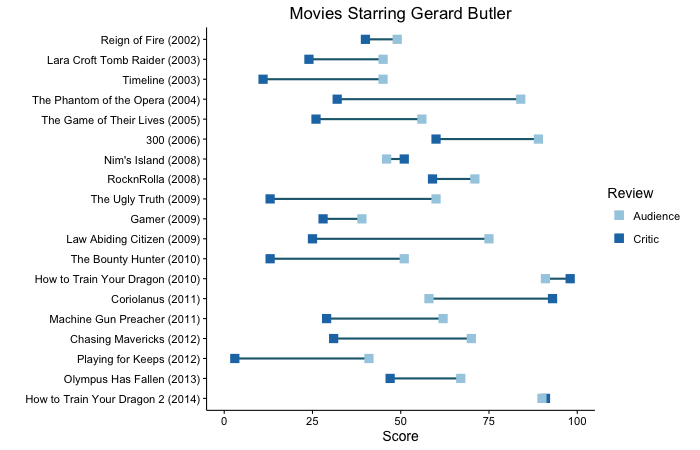 Gerard Butler of 300 fame is the most polarizing action star in our analysis. If his decision to act in Phantom of the Opera was a bid for more critical acclaim, it fell flat. Richard Roeper wrote, "This guy's not the Phantom of the Opera, he's the Fashionably Scarred Stud of the Opera and that just doesn't work." 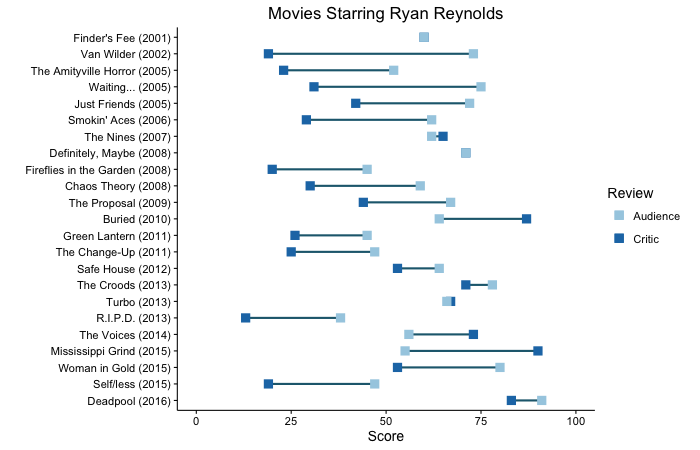 Roger Ebert said that he found laughing during National Lampoon's Van Wilder "a physical impossibility." But following the near-universal acclaim of Deadpool, Reynolds may fall off these rankings in the future. 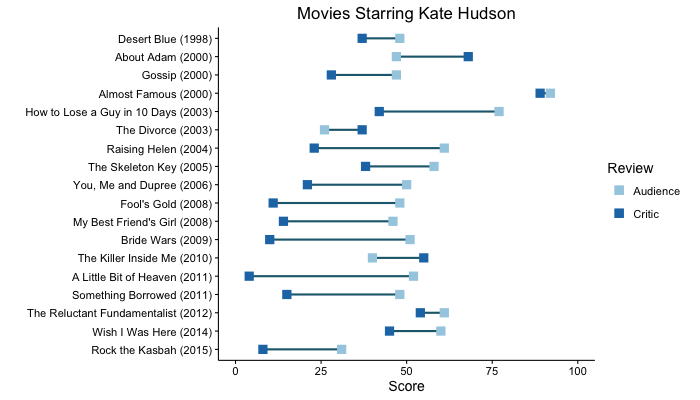 Everyone liked Almost Famous, but critically despised films like Rock the Kasbah and A Little Bit of Heaven make Hudson the most polarizing actress in our analysis. 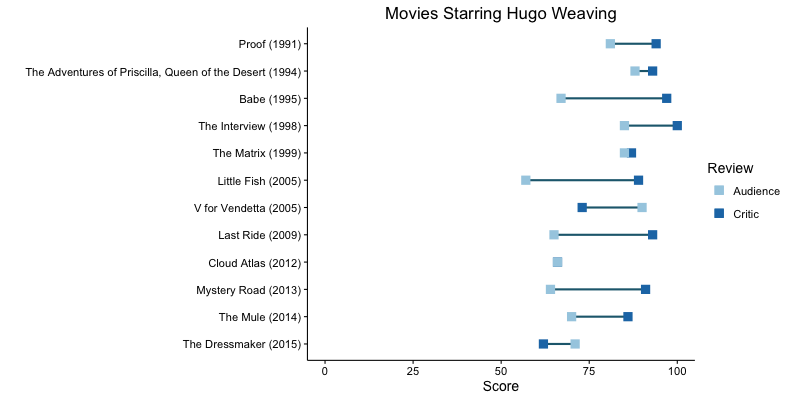 Hugo Weaving pleased audiences most with his collaborations with the Wachowski Brothers (The Matrix, V for Vendetta, Cloud Atlas). While critics have been impressed with his performances in Australian comedy-dramas, they’ve failed to connect with audiences. 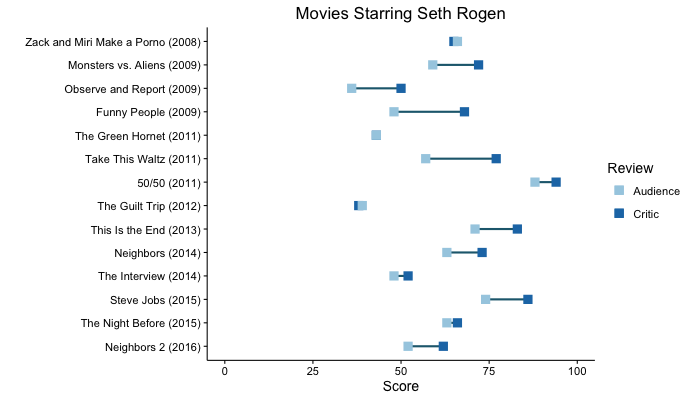 Seth Rogen is probably the most surprising inclusion on our “critic-favorite” list. While critics and audiences agreed that The Green Hornet and The Guilt Trip were terrible, critics tended to review his other pieces more favorably than audiences. He may have been onto something when he suggested that “what separates a funny movie from a good movie is something personal.” 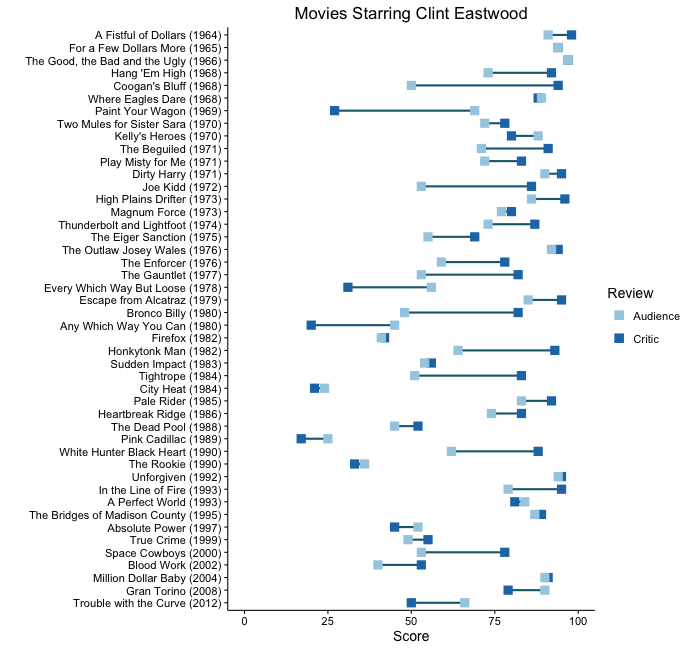 With high reviews from both critics and audiences, including two Best Picture and Best Director awards (Unforgiven, Million Dollar Baby) and nominations for three more (Mystic River, Letters from Iwo Jima, American Sniper), Clint Eastwood has proven himself a skilled actor and director. In a career spanning 50 years, though, there are bound to be some missteps, such as 1984’s Tightrope, which didn’t sit well with audiences—but critics loved. 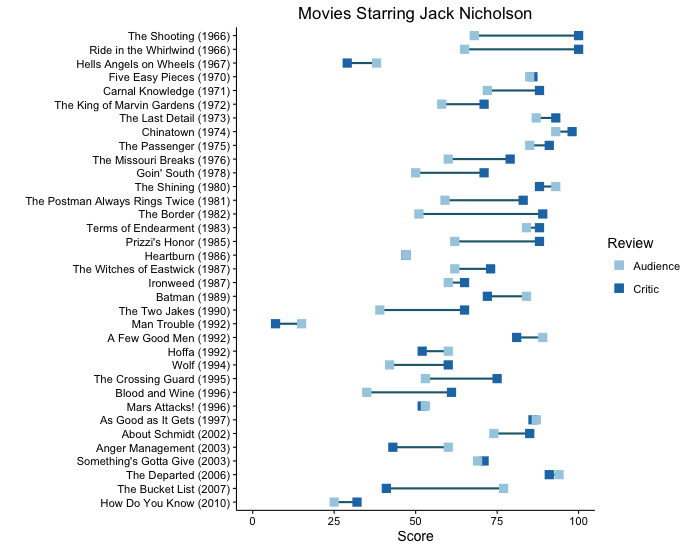 By and large, critics have appreciated Jack Nicholson’s movies more than audiences (though plenty have been highly rated by both parties). Audiences have a hard time with Nicholson’s mid-career thrillers, but have been pretty pleased with his recent foray into comedies like The Bucket List and Something’s Gotta Give. 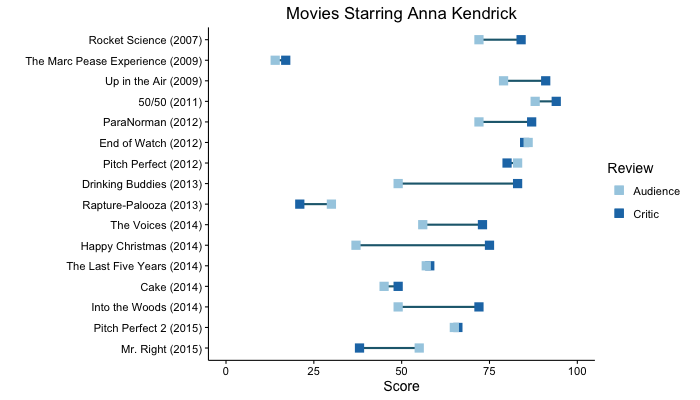 Critics have enjoyed Anna Kendrick’s performances in independent movies and musicals, but audiences haven’t been so sure about the indies. Audiences rated Drinking Buddies and The Voices far lower than critics did; Rotten Tomatoes user 5pointed wrote that Happy Christmas “was as interesting as the 'How are you?' 'Good, thanks, and you?' conversation with a stranger on an elevator. You don't really care."

Audiences and critics don’t always agree about the quality of a movie or the talent of an actor.

It’s no shock that actors who have won over audiences tend to specialize in goofy comedy and popcorn action movies, while actors that critics fawn over tend to pursue meatier dramas and challenging indie scripts.

The exception to the rule is Seth Rogen, who has somehow made a career out of goofy comedies—and charmed critics while doing it.

Our next article explores the 100-year history of celebrity pets—and how cuddly pugs become cash machines. To get notified when we post it  →  join our email list.