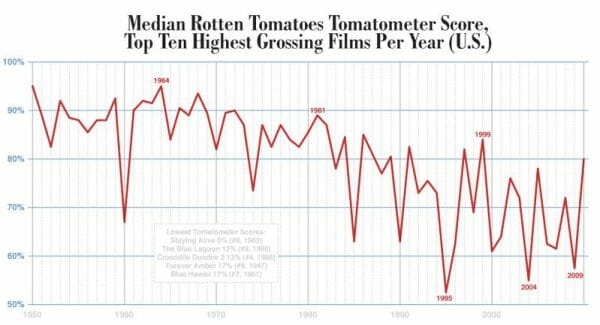 Are movies getting worse? A quick look at ratings given by Rotten Tomatoes to the top-ten highest grossing films per year since 1950 may lead you to believe  “Yes.” The graph above shows a gradual and persistent decline in the average rating of each year’s top-grossing movies. The top movies released in 1964 had an average rating of around 95%; in 1981, right under 90%; in 1999, 85%; and in 2009, under 60%.

Before we pull out our pitchforks and march out to Michael Bay’s mansion, however, let’s keep in mind an important factor: Rotten Tomatoes was founded in 1998. Its ratings algorithm is based on reviews that have been published since that year. For example, taking a look at the critics’ reviews for “The Battle of Algiers,” the famous 1967 movie. On Rotten Tomatoes, the movie’s oldest review was written in 2004, a solid 37 years after the movie came out. The important perspective that is missing, then, is how critics viewed movies like “The Battle of Algiers” when they first came out in theaters. Without this perspective, it would be unfair to say that movies are getting “worse.”

In fact, what may be happening is that critics nostalgically look upon old films as important pieces of history. As such, with this overly romanticized view of “Old Cinema,” the ratings of older movies will not be subject to the harsh scrutiny of movies being released today. You’d have to be an especially curmudgeonly reviewer with too much time on your hands to go back and write scathing reviews of the old classics.