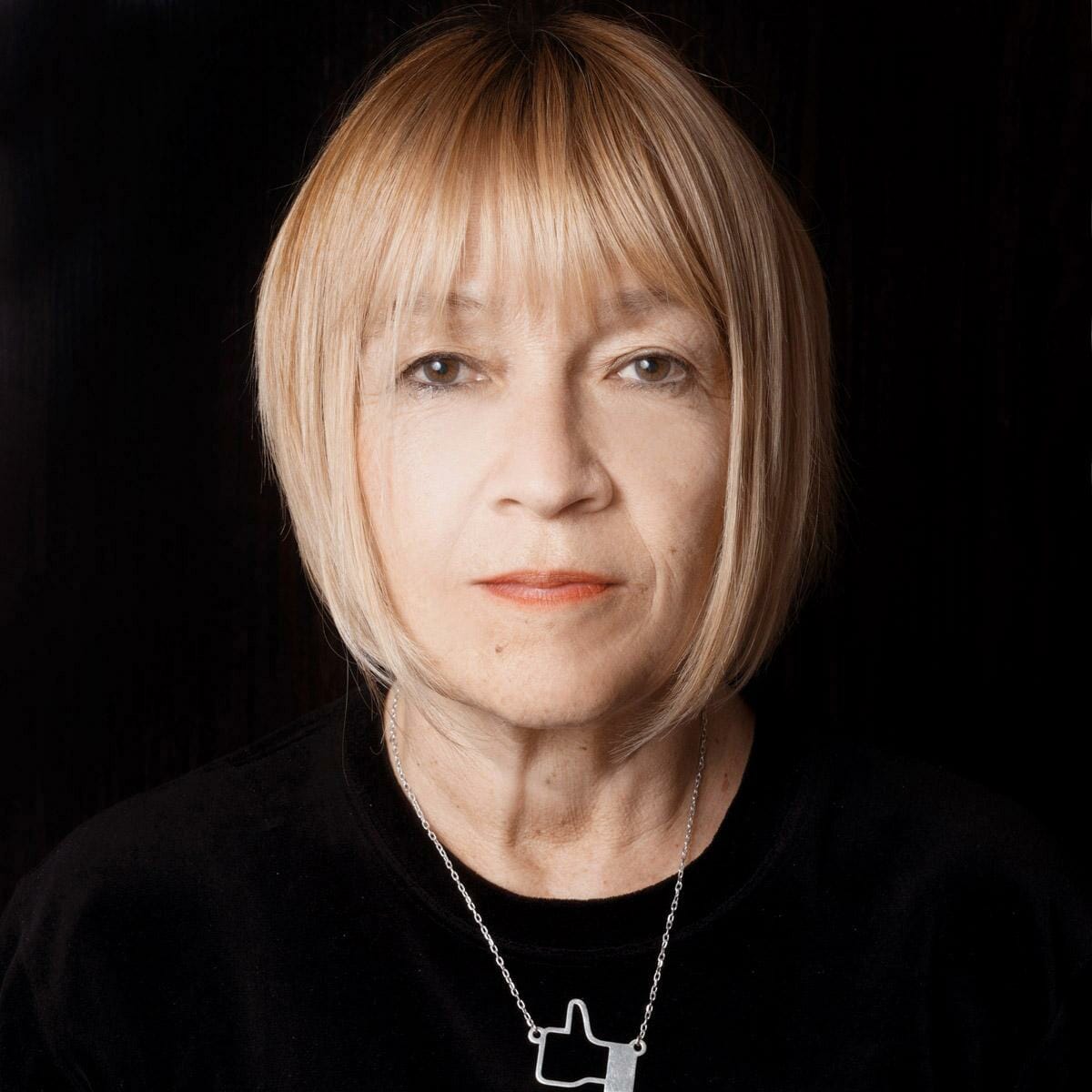 Cindy Gallop never intended to get into sextech.

But it all started with an observation from her sex life.

Gallop did not intend to launch a business—just “start a dialogue.” She succeeded. Nearly 1.5 million people have watched her talk. Three thousand people a day visited makelovenotporn.com, and she received thousands of emails.

MLNP exemplifies Gallop’s belief, which she very much wants to tell you about, that the business model of the future is: shared values + shared action = shared profits (financial and social). She and her team describe the mission of MLNP as improving our sex lives for the better.

Today, MLNP has neither failed nor achieved remarkable success. Two years after its launch, it is in public beta and, according to Gallop, earns revenues in the low five-figures each month.

Instead the biggest obstacles have been what is usually the easy part of starting a business: opening a bank account, sending emails to a list of members, and accepting Visa. Because as Gallop says, “My team and I fight a battle every day to build makelovenotporn.tv—an honest, transparent, ethical business with a social mission—because we are barred from using the business infrastructure that other tech start-ups take for granted.”

It’s not unusual for a startup founder to struggle to raise funding.

When Gallop talked to investors, she had a few things going for her. Gallop has an impressive background in marketing—she started the U.S. branch of the ad firm Bartle Bogle Hegarty and won the 2003 Advertising Woman of the Year Award. A team including a designer and a developer, who worked with Gallop on another startup, IfWeRanTheWorld, wanted to work on MLNP. She could also cite the reaction to her TED Talk and examples like E. L. James’s Fifty Shades of Grey as evidence that socially acceptable sex may be an untapped market with huge potential.

But the fundamental problem, she stresses, was that investors responded to her pitch like they were pastors: they simply would not touch an adult entertainment company.

One venture capitalist, Gallop says, told her, “At the end of the day, it’s not about what I think. It’s about what every other partner and every investor in my firm will think.” Investors understood what she was trying to accomplish, but they would not break the taboo that surrounds companies that reach into our sex lives.

Venture capitalists are infamously non-transparent when they decline to make an investment, and their rejection of MLNP may be due to other, unstated considerations. But Gallop’s claim that taboos around sex prevent companies like hers from fundraising is widely shared by sextech entrepreneurs.

Gallop had an idea for a scaleable, tech-centric business, a social mission, and an intriguing proof of concept, in the form of her TED Talk, that she may be onto a huge, unfulfilled need.

But sex does not sell in Silicon Valley.

It took 2 years, but Cindy Gallop did secure seed funding from an angel investor.

With that $500,000 investment—a modest amount of seed capital for a tech startup—Gallop worked with two co-founders, a developer and a designer, to build the site. As MLNP’s funding dwindled, they both took on full-time jobs elsewhere. The current team is small: Gallop works full-time, unpaid; Madam Curator Sarah Beall works full-time to manage the community and vet submitted videos (the primary criteria is that the sex is consensual and not staged); and an assistant curator and a developer work part-time.

But finding funding was just one of many problems.

For most startups and small businesses, opening a bank account is routine. That was not the case for MLNP. “I can’t find a bank anywhere in the world,” Gallop says, “that will allow me to open a business bank account, honestly and transparently, for what we want to do.” She has the same problem when it comes to accepting payments from MLNP members. “PayPal won’t work with us,” she says. “Mainstream credit card operators won’t work with us.”

In each case, the terms of service said “No adult content,” forcing Gallop to contact each company to ask if they could work together. The answer was usually “no.”

Gallop finally found a German bank, whose team is very supportive of her business, that set MLNP up with a merchant account that allows MLNP to accept Visa and Mastercard at a 3.9% rate. The PayPal competitor Dwolla also agreed to work with MLNP, but for now, Dwolla only serves the American market.

The payments setup is far from ideal. MLNP members regularly ask to use PayPal. The credit card companies also put MLNP in the high risk division—over Gallop’s objections that they are socially acceptable sex. This means that whenever members rent a MLNP video, their bank sees a high risk transaction from a European bank, flags it, and stops the transaction.

When Gallop says that MLNP could double its revenues overnight if she could work with Stripe and PayPal, she may be understating the case.

Given all the obstacles, Make Love Not Porn’s growth is both small and impressive.

Sales are modest, but they are an impressive indication that people want real world sex videos. Even though millions of pornographic video clips are a few clicks away, MLNP members are paying $5 per video and calling their bank to make sure the payment goes through.

Some MLNP stars are also making thousands of dollars every few months. Gallop likes to joke: “You know those scam ads that keep popping up on the Internet, that say, ‘Make $2,000 a week working from home!’ Well, now you can!”

One perspective is that the ubiquity of pornography online has made it a commodity, whereas MLNP’s videos of real sex are a unique product that people are willing to pay for.

Another purpose of MLNP videos is the one that launched Gallop’s TED Talk: education. She hopes that watching MLNP will allow people to learn from diverse examples of real world sex—rather than thinking hardcore pornography is the way people have sex. “Because we’re social sex,” Gallop explains, “it’s okay for [someone] to say to their partner, ‘Oh, I came across this thing. Should we watch?’” 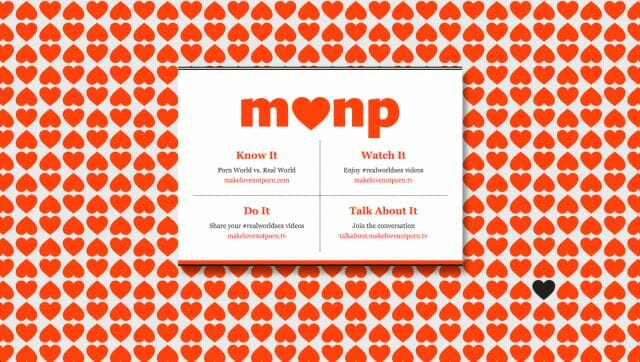 Another, less obvious category? The MLNP team wants sex to be funny; they want to see the outtakes from filming sex.

“There is a huge market for that,” Gallop insists, as she describes how they want to host a naughty version of America’s Funniest Home Videos. “Imagine a sex equivalent of Charlie Bit My Finger, which has now had over 800 million views on YouTube. Imagine something as funny, spontaneous, empathetic, everyday as that, but in the sex context. Funny or Die isn’t doing that. College Humor isn’t doing that. We want to do that.”

The mission of MLNP is to get people talking about sex. “Real world sex is not about performing for the camera,” Gallop says. “It’s about doing what you do on every other social platform, which is simply capturing what goes on in the real world in all its funny, messy, glorious, wonderful, ridiculous, amazing humanness.”

It is these aspects of MLNP that explain its early growth: its community really seems to believe in the mission. As one MLNP star explained in an interview, “I think it’s important when you are being vulnerable to the world that you get paid in return. And you have to feel like you’re doing it for a reason.”

For many tech startups, timing is as important as execution.

The prospects for an online dating site were poor in the early days of the web, when meeting dates online seemed weird. In the same way, while a number of podcasting startups struggled in the early 2000s, today a customer base and supportive infrastructure for podcasts has helped Gimlet Media quickly achieve critical success and a $30 million evaluation.

It’s easy to imagine how MLNP could be an idea that came too early—or will not escape a niche. Gallop describes the extraordinary reaction to her TED Talk as largely due to the fact that she publicly discussed her sex life and an issue that everyone knows about but never talks about. Her talk could be a harbinger of cultural change, but it’s still hard to imagine a critical mass of people openly sharing bloopers from MLNP’s real world sex videos.

Yet this hasn’t stopped sextech entrepreneurs, who are building, pitching, or selling sex toys that allow long-distance couples to “feel each other’s touch,” virtual reality sex, and educational, sex games. As Gallop points out, many of these founders are women who want to disrupt the male-dominated world of adult entertainment.

Which seems like a better bet on the future: finding new ways to fund cliche, hetero-male-focused, hardcore pornography? Or inclusive, sex positive businesses that people feel good about?

But for Cindy Gallop and her fellow sextech entrepreneurs to disrupt the sex industry, they’ll need Silicon Valley to stop being a bunch of prudes.

“We believe the next big thing in tech is disrupting sex. And the tech and business world is doing everything it possibly can to stop us,” says Gallop. “Where’s the sense in that?”