The Evolution of Potty Training 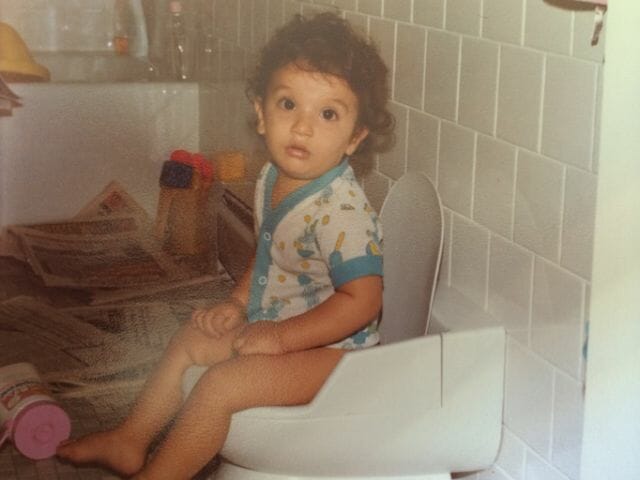 Priceonomics’ CEO in one of his finest moments

At some point between the terrible twos and terrifying threes, most of us embarked on a pilgrimage to the great ceramic bowl in the sky. It was a long journey, which left in its wake frustrated parents, soiled sheets, and tiny mounds of ill-timed poop. But over time, with practice and patience, we collectively conquered the art of potty usage.

Let’s be brief and frank about poop: It’s nothing to be ashamed of. Aside from eating and sleeping, it’s basically all we do in our early years. For the duration of our lives, it remains one of the simplest, most fundamental human actions. Naturally, being properly trained for something of this significance is incredibly important.

There was a time when potty training was harsh and almost militant; today, with advanced diapers and technology, most parents allow their babies to take control. But this shift has come with a less-than-savory byproduct: It takes today’s children nearly twice as long to be fully trained as it did fifty years ago. Is tech to blame?

In the late 1800s, infants’ bottoms were wrapped in cloth diapers that were usually made of cotton or linen secured with safety pins. Supplies and resources were often limited, so when a child wet herself, her diaper would often just be hung up to dry; for accidents of the solid variety, the cloth would be thrown into a boiling pot of water. As people became more aware of bacteria, infections posed a higher concern, and proper toilet training rose as a top priority. Often, to avoid extra work, parents would resort to dramatic measures to train their children: Enemas, suppositories, and physical force were enlisted in an effort to teach children to use the restroom at younger ages.

Potty training methodology at the onset of the 20th century was simple: Babies would be put on strict laxative schedules to induce pooping at predictable times. Most doctors encouraged caretakers to start this “training” as young as six months, and it was a philosophy that extended into the late 1930s.

Toward the tail end of World War II, researchers attempting to explain why Japanese soldiers were so “aggressive” falsely determined that it was due to the culture potty training infants at a younger age. Anthropologist Geoffrey Gorer hypothesized that the “brutality and sadism” of these soldiers stemmed from a repressed potty rage. “Early and severe toilet training,” he wrote, “is the most important single influence in the formation of the adult Japanese character.” His unfounded philosophy, coupled with several groundbreaking inventions, would provide fodder for potty training reform over the next decade.

The Rise of the Disposable Diaper 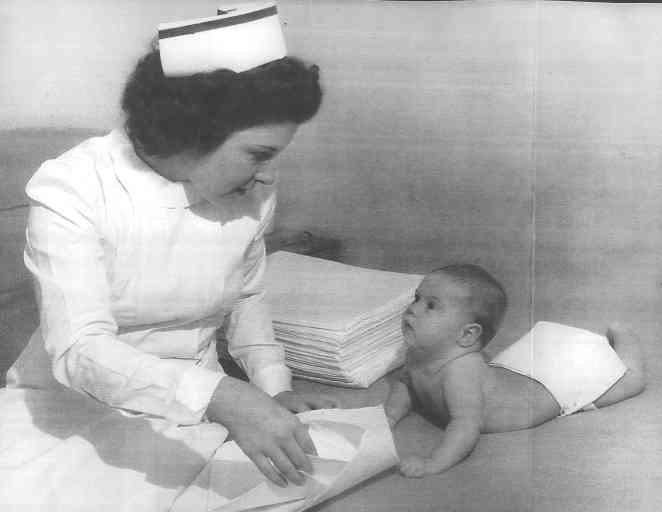 By 1946, Dr. Benjamin Spock, a renowned pediatrician, was encouraging parents to “leave bowel training almost entirely up to your baby…. [who] will probably take himself to the toilet before he is two years old.” Soon, more militant potty training techniques ceded way to the “readiness approach,” which contended that parents should hold off on any training until a child was physiologically ready — generally agreed to be around 18 months. Mothers would observe their child’s schedule and habits and patiently work with her until she made a connection between the feeling of having to go and the action itself.

It was around this time that Marion Donovan, a New York housewife, invented disposable diapers — though they were incredibly pricey, and most parents continued using cloth diapers over the next 20 years.

Throughout the 1970s, companies began to find cheaper alternatives for the production of disposable diapers. Touting a bevvy of “diaper technologies,” Pampers rose to prominence, and disposable diapers increasingly replaced cloth diapers. As such, the motivation to train children at an early age waned. A modified approach to pooping emerged: Potty training pioneers at the American Academy of Pediatrics began recommending a “100% child-centered approach” which advocated letting the child dictate her own level of readiness instead of forcing them into it prematurely.

Pampers and other companies continued to trumpet this “hands-off training” rhetoric, but it came with a caveat: as training became more lenient, the age at which children were fully self-sufficient at pooping ballooned:

Whereas 95% of children in the 1950s were potty trained by 18 months, only 10% are today. While this can be attributed to many factors (like the aforementioned philosophical changes), there seems to be a correlation between the increase of disposable diapers and the decrease of children potty trained at younger ages.

Today, parents continue to favor lax — not laxative — potty training approaches. In 2001, writer Ingrid Bauer popularized the “elimination communication” theory, which suggests that Americans ignore cues from their babies. Prior to writing her book, Diaper Free: The Gentle Wisdom of Natural Infant Hygiene, Bauer took a trip to India, where observed mothers’ close attention to their babies’ cues — gurgling noises, squirming, and eye movement — in determining when they needed to use the bathroom.

A vast majority of modern-day parents still subscribe to a “hands-off” training approach, as indicated by this BabyCenter poll. At the same time, it takes American children nearly twice as long to complete potty training as it did in the 1950s.

Americans, Bauer contends, “ignore these cues.” She endorses the abandonment of diapers so that children may follow the natural inclinations of their sphincters — and a small cult of mothers are taking note. “The idea is that your child was born ready to potty train,” explains Maria Guido, a Mommyish blogger, “and it’s your lazy Western reliance on environment-destroying disposable diapers that is getting in the way of your six-month-old’s natural inclination to use the actual toilet.”

But the latest trend in potty training features something else getting in the way — an iPad screen — and it’s counter-intuitive.

The Unfortunate Disruption of the iPotty 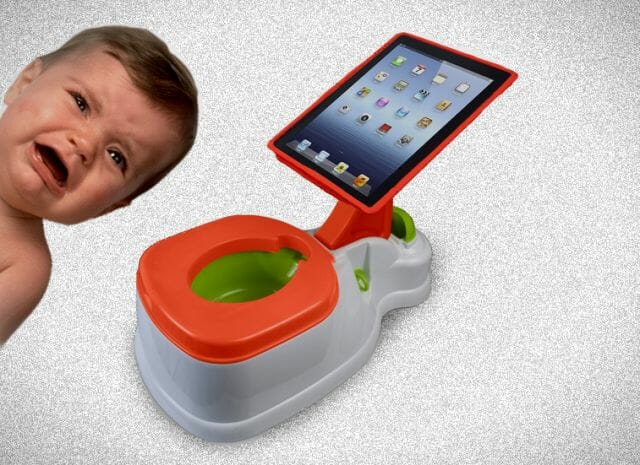 Computer technology has attempted to refine the potty experience for toddlers since the mid-2000s. While most psychologists and child development experts have continued to stress the importance of patience and cooperation, hundreds of apps have tried to expedite the learning process.

Last year, CTA Digital, a Brooklyn-based company that creates “innovative accessories for iPad, tablets, smartphones and gaming consoles,” took things a step further by unleashing the iPotty, a small, colorful toilet featuring an iPad mount. Many have voiced concerns that the product’s intention — to have your child shit while staring into the abyss of an Apple product — has encouraged a passive role for parents.

“Has it really come to this?” asks one Amazon reviewer. “Is it truly necessary to put our children in front of a screen — even when they’re in the midst of diarrhea?” It’s a pertinent question, and CTA is quick to defend itself.

“The child can straddle this to do [his or her] business,” says Lois Eiler, CTA’s marketing consultant, in a YouTube interview. “And meanwhile, [he or she] can be entertained with [his or her] parents’ iPad!” She elaborates:

The toilet is intended to be used in conjunction with potty training apps like Potty Training: Learning With the Animals, which offers this thought-provoking prose:

“If you can feel it then it’s time!
Go to your potty, pull your pants down,
Sit and wait (wait wait wait)…
Until you poo or pee.
Then you got to wipe it away with toilet paper —
And celebrate as you flush it away!”

At 2013’s CES (Consumer Electronics Show), the iPotty made a big splash, garnering the attention of nearly every gadget review site on the Internet, but feedback wasn’t necessarily positive. While CTA touted its invention’s “360-degree rotating iPad swivel” and “removable touchscreen cover to guard against messy accidents,” it was eventually awarded the 2013 TOADY, an annual honor given to the worst invention of the year. 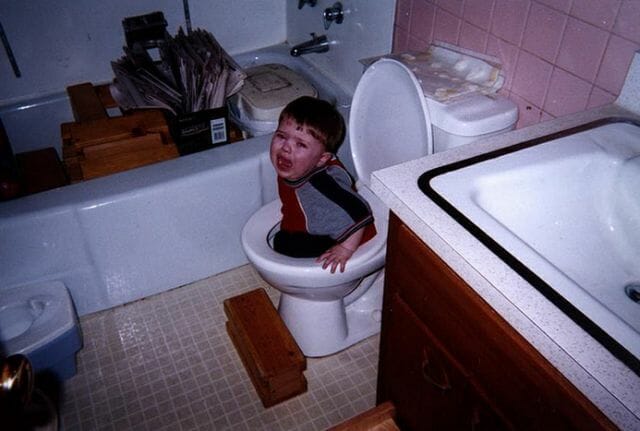 On a surface level, it seems that there is no use in complicating a very simple thing. We pooped long before the iPad. We pooped before there were toilets. Hell, we pooped before we even knew what pooping was. To what extent have our efforts to pioneer bathroom habits been progressive?

Admittedly, the modern potty training discussion is a lot more complex than what we’ve presented here (methodology has been debated by everyone from Freud to Alicia Silverstone). But even a glimpse into its history demonstrates how technology, coupled with ideological shifts, has impacted how we teach our children even the most basic human actions.

If you liked this blog post, you’ll be mildly amused by our book → Everything Is Bullshit.