The Evolution of Startups, As Told by Analyzing Company Descriptions 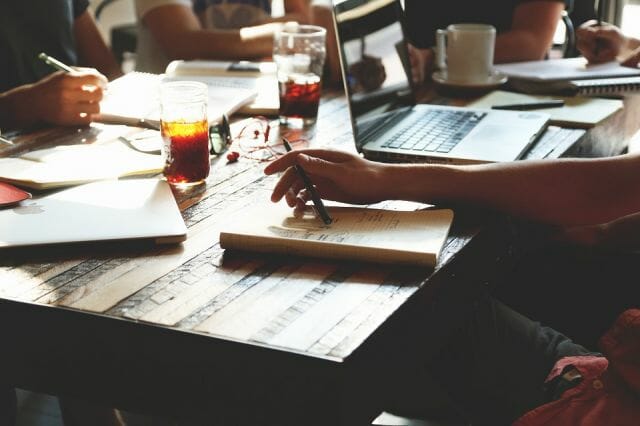 By itself, the company bio of a startup doesn’t make for great reading.

But in aggregate, company descriptions reveal important trends in Silicon Valley. Do founders still aspire to create the next big app? How big is “big data” now compared to five years ago?

To answer these these questions, we turned to the data of Priceonomics customer CB Insights. CB Insights aggregates and analyzes enormous amounts of data to help answer strategic questions about the future of investing. The data includes the descriptions of thousands of companies that received venture capital investment since 2010.

We decided to examine the descriptions of these companies to get a better look into the ever-changing startup landscape. We used natural language processing to identify trends by looking at which words are more or less common today than at the beginning of the decade.

We found that social media, mobile apps, and email startups are on their way out, while messaging, healthcare, tools, and artificial intelligence are gaining momentum. By and large, startup descriptions are tech-heavy, featuring words like “app,” “cloud,” and “network.” Our data also shows that no word has seen a bigger jump in usage than “virtual reality” and no word a bigger decline than “electronics.” Development words like “app”, “platform”, “users”, and “mobile” dominate the list. Tech words like “system”, “software”, and “device” aren’t far behind. Healthcare words (“health” and “provider”) can be seen at the bottom of the list.

But the popularity of these words—and the types of businesses they reflect—have not been stable over time. So which words are becoming more or less common? 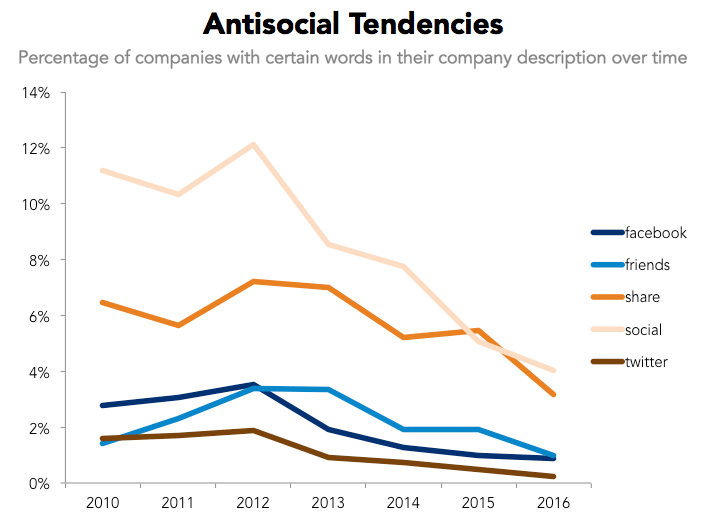 The use of the word “social” dropped from 12% of company descriptions to about 4% over the past six years. It may be that the space is too crowded for social startups to thrive.

Most users access social networks from a mobile app, and our analysis also suggests that fewer founders are creating apps. 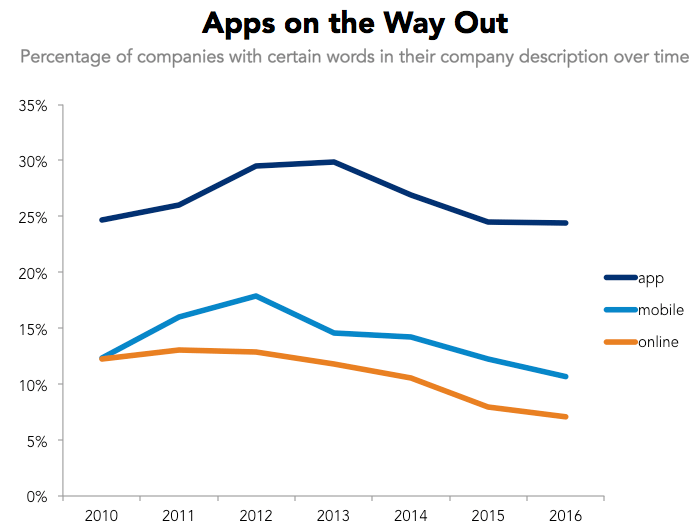 Along with social media and apps, we found that fewer startups focus on email. What’s replacing email? “Messaging” and “Slack.” Both of those words have seen a large increase since 2010. (Slack was not a company in 2010, so its one mention in that year was unrelated to the software.)

While the concept of an instant message isn’t new, its application in the workplace is. And in many ways, American startups are chasing the example of Chinese companies like WeChat, which turned messaging into an e-commerce juggernaut.

By 2029, 20% of the United States’ population will be over the age of 65. So it’s no surprise that venture capitalists are increasingly funding healthcare startups. 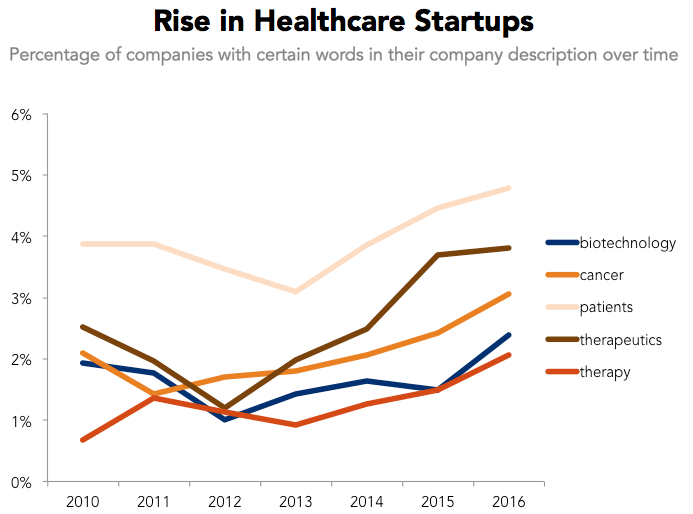 Health-related words like “cancer” and “patients” have experienced growth, alongside “biotechnology” and “therapy.” Scientists seem to be flocking to startups.

Along with health, words related to advanced data mining are also on the rise. 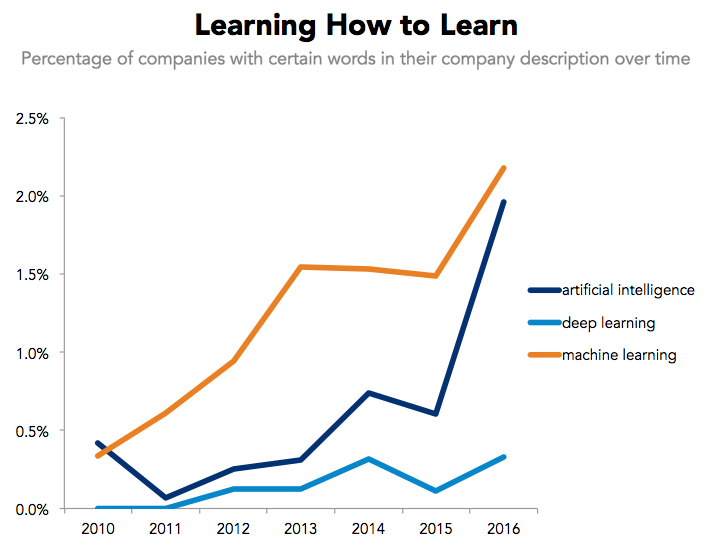 Prior to 2012, startups rarely described themselves as tackling “artificial intelligence”, “deep learning”, or “machine learning”. But today, nearly 5% of venture-backed companies do. The appearance of the term “Artificial intelligence” has seen a particularly large recent increase—almost tripling from 2015 to 2016.

So far we have looked at trends in the appearance of words related to certain topics. But which words—and the types of companies they represent—saw the largest increases and declines?

The following table shows the forty words that saw the largest relative increase in usage from 2010 to 2016. 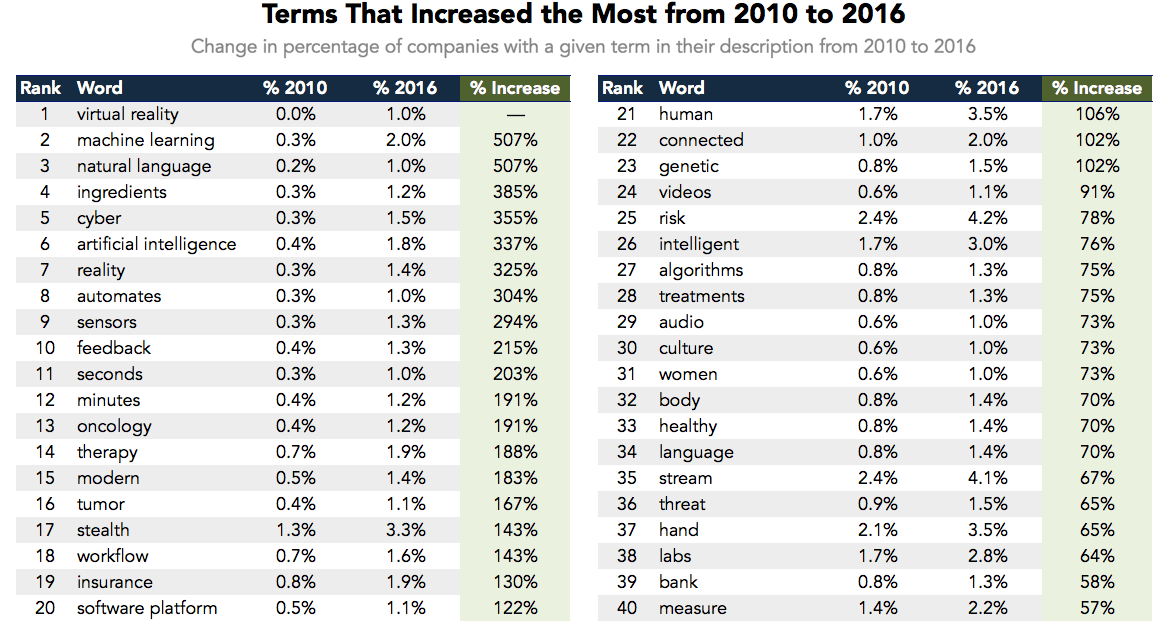 Other fast growing terms include “machine learning” and “natural language”—terms most commonly used in the data science community. “Ingredients” is the fourth fastest growing term—a result of the increase in food-related startups.

This next table shows the words that saw the largest decrease. 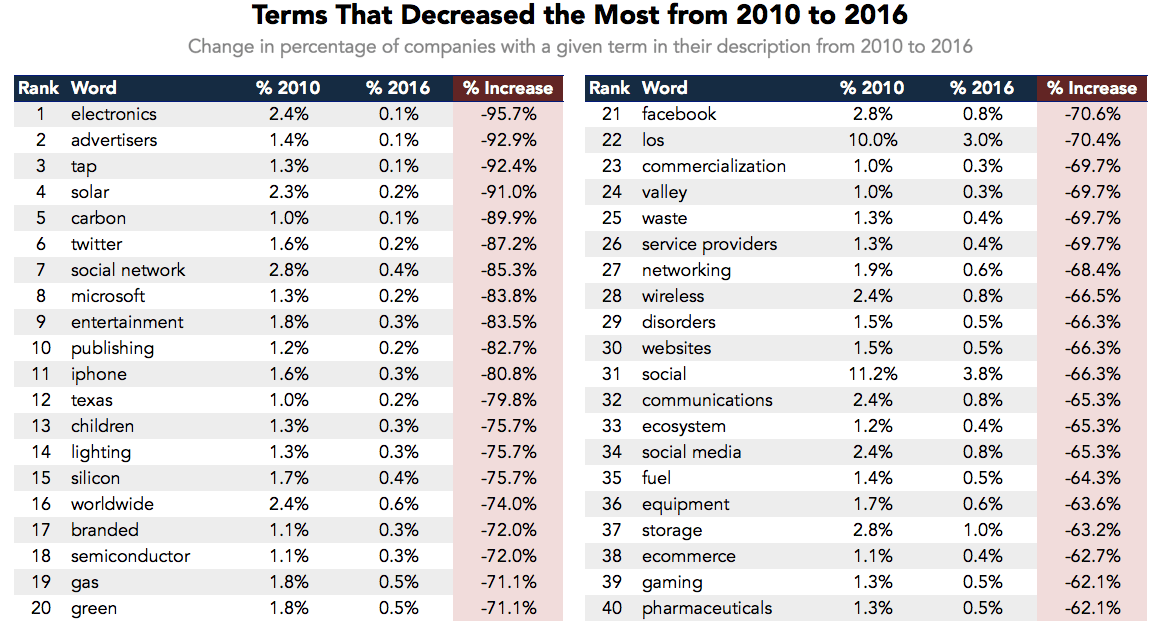 The word “electronics” went from appearing in more than 2% of all company descriptions in 2010 to almost none in 2016. It seems that with an increasing focus on data mining, health, and software services, fewer companies describe themselves as working on hardware.

“Twitter” (6th), “Facebook” (21st), and the term “social media” (34th) all appear on this list. The usage of each in company descriptions fell by more than 65%. This signals the shift away from startups trying to develop the next Instagram or Snapchat—that landscape may already be saturated.

If growth areas in the startup industry depict the future, what does that future look like?

It looks like social media, email, and mobile apps may cede the stage to startups that address healthcare, messaging, and artificial intelligence. Long live our chatty, robot doctors!

Our next article investigates the rise of the write-in vote in American presidential elections. To get notified when we post it  →  join our email list.